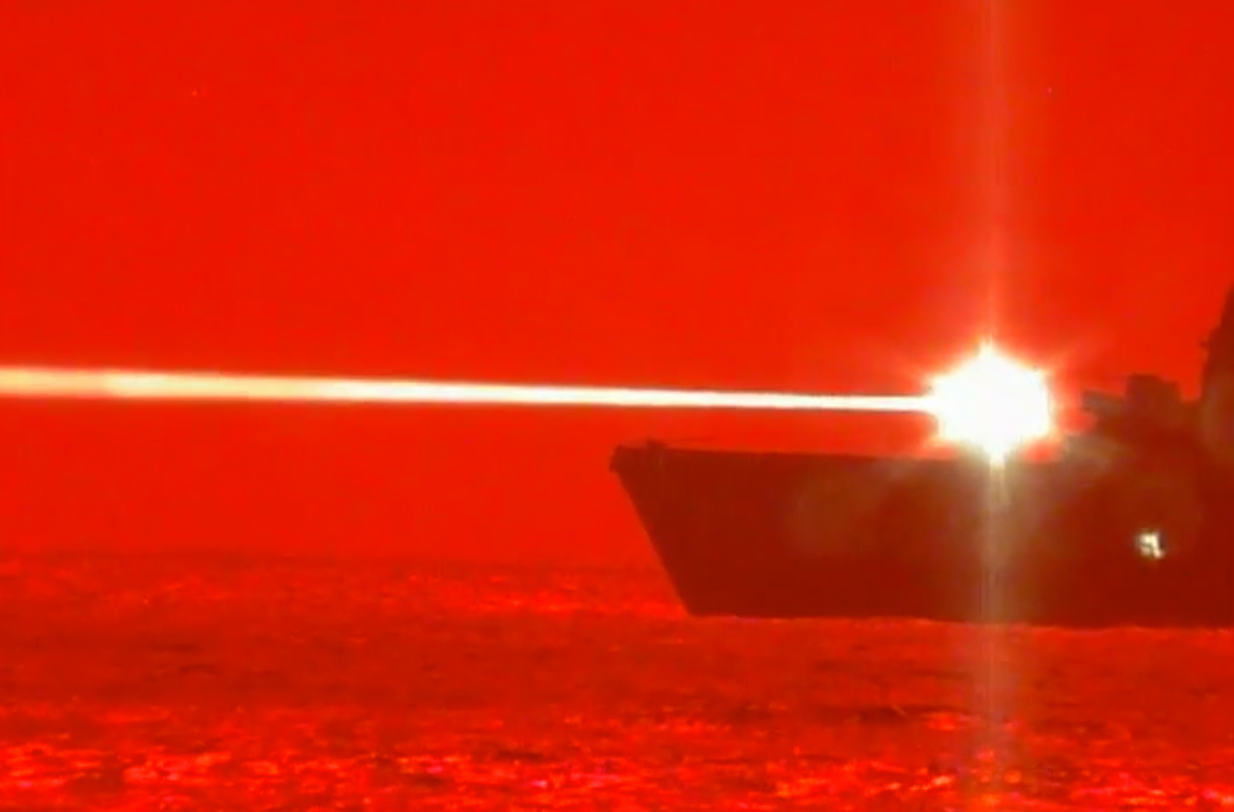 Amphibious ship USS Portland (LPD-27) shot down a drone with a laser weapon during a first-of-its-kind at-sea test of the Navy’s high-energy laser weapon system.

The Navy is currently developing and testing a portfolio of laser weapons, some of which are more powerful but only suited for ships with greater power-generation capabilities, like the San Antonio-class amphibious transport docks (LPD-17), while others are less powerful but could be fielded on a greater variety of ships, including the Arleigh Burke-class destroyer.

In this test, Portland fired its high-power laser weapon at an unmanned aerial vehicle while operating off Pearl Harbor, Hawaii, on May 16, U.S. Pacific Fleet announced in a news release today.

“By conducting advanced at sea tests against UAVs and small crafts, we will gain valuable information on the capabilities of the Solid State Laser Weapons System Demonstrator against potential threats,” Capt. Karrey Sanders, commanding officer of Portland, said in the news release.

“The Solid State Laser Weapons System Demonstrator is a unique capability the Portland gets to test and operate for the Navy, while paving the way for future weapons systems,” he added. “With this new advanced capability, we are redefining war at sea for the Navy.”

Portland, a San Antonio-class amphibious transport dock, was tapped in 2018 to be the first ship to test the Solid State Laser – Technology Maturation (SSL-TM) Laser Weapon System Demonstrator (LWSD) MK 2 MOD 0 at sea. This second iteration of SSL-TM, which is ultimately expected to become a 150-kilowatt laser weapon, draws from lessons learned from Office of Naval Research (ONR) demonstrations and testing that date back to 2011. The original 30-kilowatt Laser Weapon System (LaWS) was used by interim afloat forward staging base USS Ponce (AFSB(I)-15) in the U.S. 5th Fleet area of operations from 2014 to 2017 to gather data and lessons learned on how the system performed in an operational setting.

This follow-on SSL-TM has challenged scientists to made advances in areas like the beam director and spectral beam combining, which takes many lasers of different wave lengths and creates a more powerful beam by “ganging them up,” Frank Peterkin, the Navy’s senior technologist for directed energy, told USNI News last year.

The weapon had been undergoing testing at a Northrop Grumman facility in Redondo Beach, Calif., where engineers could test subsystems to reduce risk before sending the weapon system to conduct land-based testing and then the at-sea testing on Portland.

The Navy is also working on a less powerful laser weapon, the High Energy Laser and Integrated Optical-dazzler and Surveillance (HELIOS), which is planned to reach 60 kw and could be installed onto ships like today’s fielded destroyers that have less power margin to add in new systems. The Navy is also pursuing an Optical Dazzling Interdictor, Navy (ODIN) that would not be used to knock down incoming threats but would rather be a non-lethal option to warn away enemy craft approaching a U.S. warship.

In addition to Northrop Grumman’s work on the SSL-TM on board Portland, Lockheed Martin is also pursuing a 150kw laser weapon. The Navy announced earlier this year that it would put a laser weapon – an early version of this weapon system, still at a lower power level, USNI News understands – on USS Little Rock (LCS-9), a Littoral Combat Ship deploying to U.S. 4th Fleet later this year.