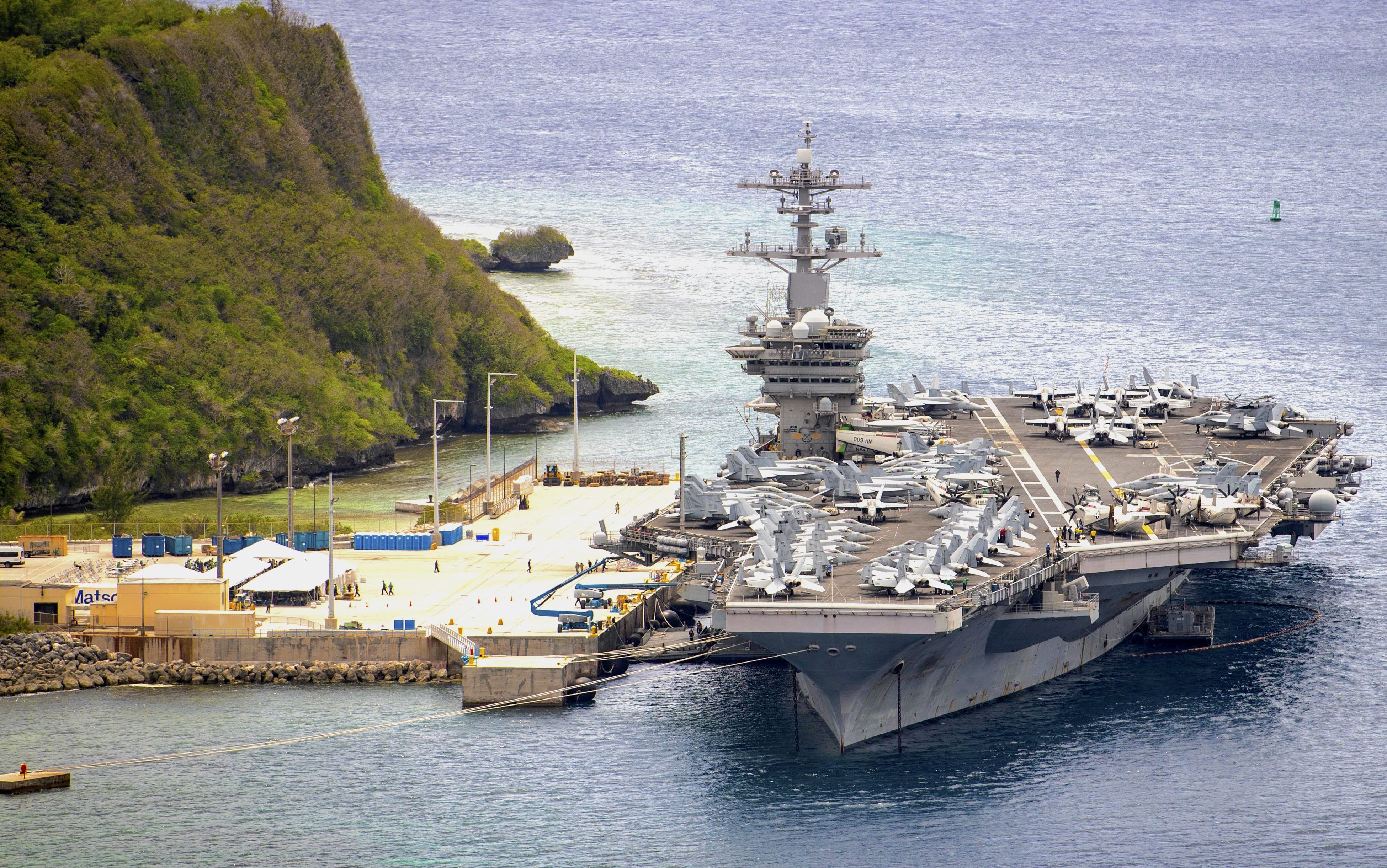 The crew of USS Theodore Roosevelt (CVN-71) is in the midst of a small pier-side exercise typically held before a ship goes underway, Navy officials told USNI News on Monday.

The “fast cruise,” when a crew tests a ship’s systems as if it’s at sea, is the precursor to a series of underway periods in which Theodore Roosevelt will qualify to return to deployment.

“Following a successful fast cruise, the ship will commence underway training and carrier qualifications to support the air wing’s return to operational readiness. During the underway, the ship will leave sailors ashore that are not required for these evolutions,” reads a statement from the carrier.
“This will enable the ship to conduct training at sea while personnel left in Guam can support the recovery of the rest of the crew who remain in quarantine or isolation. During this transition, the ship will enforce strict cleaning protocols and maintain social distancing as part of the phased approach to returning the ship to operations.”

The carrier has been moored at Naval Base Guam since March 27, following an outbreak of COVID-19 at sea that infected more than 1,000 sailors aboard the ship. The Navy is in the final stages of an attempted purge of the virus from the 4,800-sailor crew and the hull after quarantining sailors ashore. As of Sunday, 2,900 sailors have returned to the carrier.

The extensive process of isolation and testing TR sailors has been the Department of Defense’s largest front in its fight against the COVID-19 pandemic. As of Monday, the service discovered 14 sailors tested positive for COVID-19 after initially testing negative for the virus, a Navy official confirmed to USNI News. The sailors are back ashore at Naval Base Guam, and an unknown number of other sailors are in isolation and under observation after coming in contact with those who have tested positive.

While there’s no set date for the carrier to return to its deployment, there are fears that heading out too early could force a repeat of the outbreak that forced the carrier to the pier for more than a month. The Navy is in the midst of an investigation into not only the firing of former TR commander Capt. Brett Crozier after the COVID-19 outbreak on the carrier, but also into the wider chain of command in the Pacific and how leaders at all levels handled the situation. 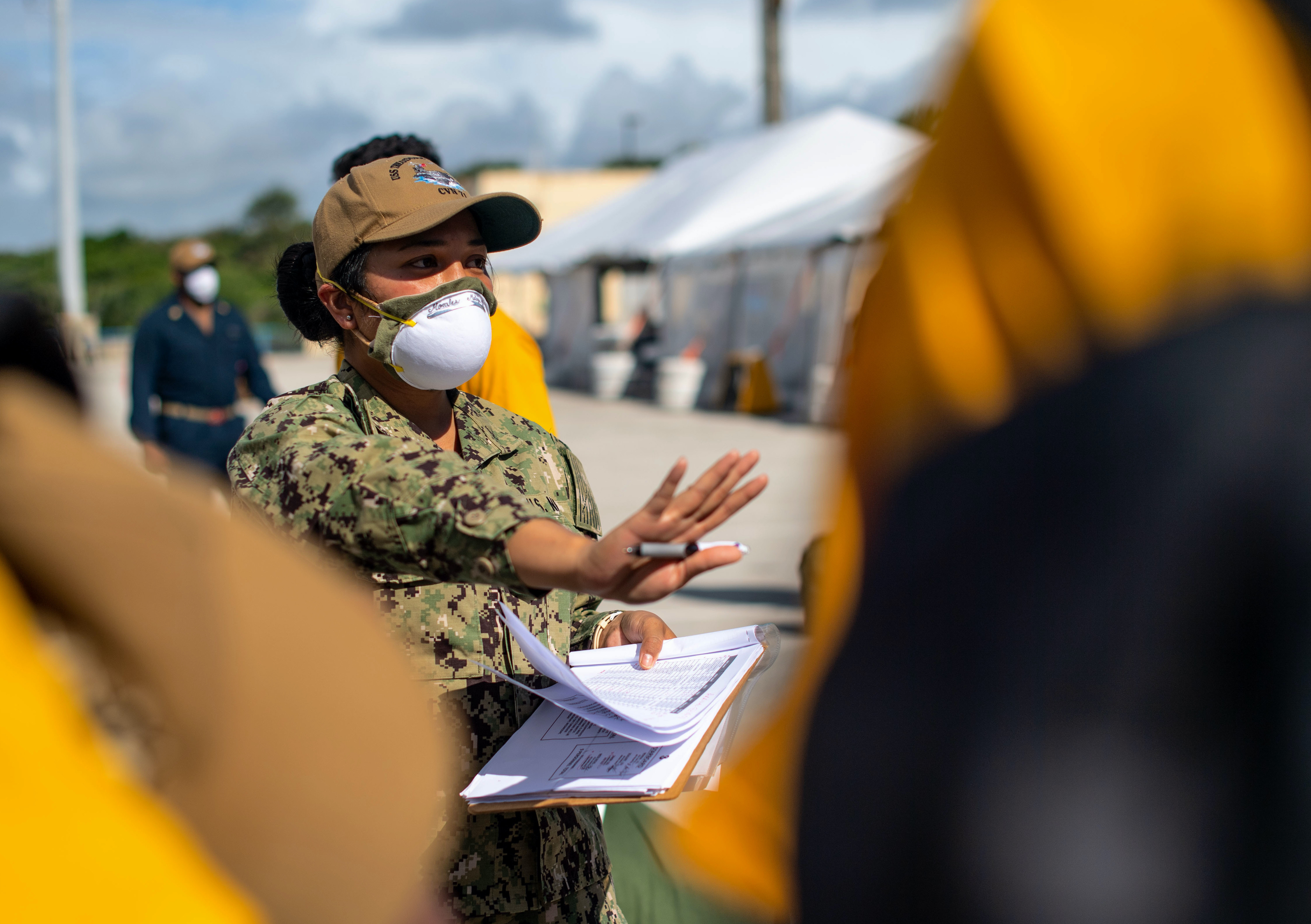 U.S. Navy Personnel Specialist Seaman Maurene Morales, from Colorado Springs, Colo., checks Sailors returning from off-base quarantine into the aircraft carrier USS Theodore Roosevelt (CVN 71) on the pier at Naval Base Guam May 16, 2020. Theodore Roosevelt’s COVID-negative crew returned from quarantine beginning on April 29 and is making preparations to return to sea to continue their scheduled deployment to the Indo-Pacific. US Navy photo.

Since the start of the pandemic, the Navy has set itself up to create virus-free bubbles aboard ships to keep COVID-19 at bay. Once the virus is aboard, given the close quarters aboard a ship, there are limited options to combat the spread. For example, once the virus was detected on USS Kidd (DDG-100), the operational commanders decided to bring the ship into port to treat the sailors and clean the ship, Vice Adm. Richard Brown, the commander of Naval Surface Forces and Naval Surface Force Pacific, told USNI News.

“If it gets on, it’s on the ship. And you can slow and arrest the spread, but at some point, you start losing the battle, and that’s when you have to take more urgent and decisive action, and that’s what we did with Kidd,” Brown told USNI News earlier this month.
“If we had left her out there, I would say at some point the entire crew would have been infected in a number of weeks.”

Currently, both the Reagan and Nimitz Carrier Strike Groups are preparing to deploy using the lessons from the Theodore Roosevelt outbreak. Both strike groups have had their sailors in isolation in a restriction of movement (ROM) period for nearly a month before going underway.