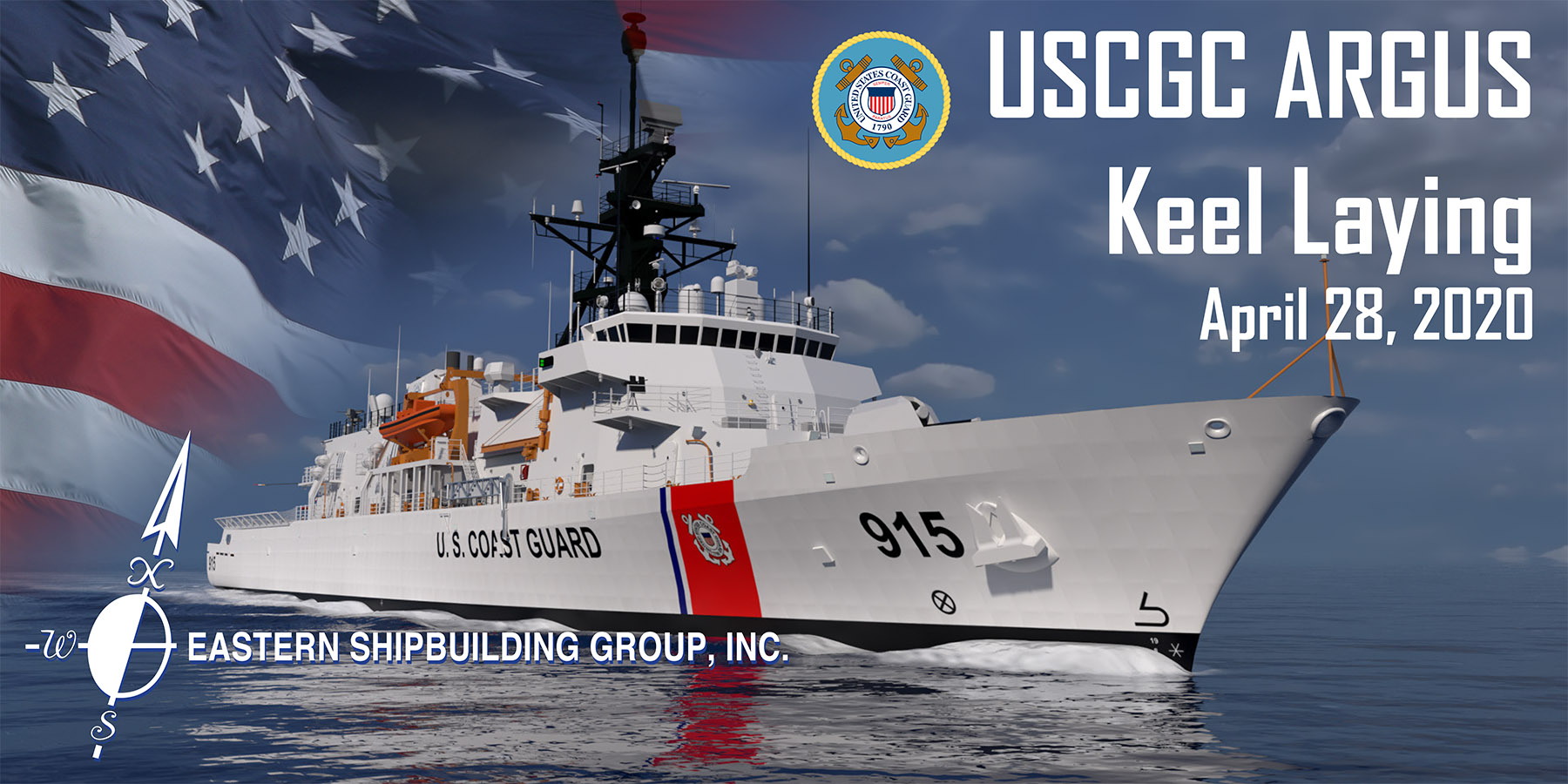 This post has been updated to correct the headline. The keel was laid on the first cutter in the class, while a contract was awarded to begin construction on the second.

Eastern Shipbuilding Group laid the keel for the first Offshore Patrol Cutter (OPC) for the Coast Guard, in an audience-free ceremony at the company’s Panama City, Fla., yard.

The ceremony for the future Argus (WMSM-915) was held on April 28, the shipyard announced in a May 4 news release, and was conducted in accordance with Centers for Disease Control and Prevention (CDC) guidelines to combat the spread of COVID-19.

During the ceremony to mark the ceremonial start of the ship’s life, ship sponsor retired Coast Guard Capt. Beverly Kelley’s initials were welded onto the keel authentication plate. Kelley became the first woman to command a U.S. military vessel when she served as the commanding officer of 95-foot patrol boat USCGC Cape Newagen in 1979, according to the news release. She also became the first woman to command both a medium endurance cutter and a high endurance cutter when she served on USCGC Northland and USCGC Boutwell, respectively.

Though the ceremony marked the beginning of the ship’s life, the program has already seen much turmoil. Eastern Shipbuilding won the detail design and construction contract for the program, earning $110.3 million for the design and construction of first-in-class Argus, with options in the contract for eight more ships. Argus was expected to deliver in Fiscal Year 2021.

However, after the design was approved in July 2018, category 4 Hurricane Michael slammed through the panhandle of Florida months later, damaging the yard and driving away much of the workforce that was set to build Argus and its sister ships. The yard wasn’t able to begin cutting steel for Argus until January 2019. A year after the hurricane, with the program then deemed a year behind schedule and at risk for its long-term cost and schedule, the Coast Guard announced a plan in October 2019 to bring on another shipbuilder to help get the program back on track. Under this plan, Eastern would only build four ships and then would have to re-compete with other bidders for additional work.

Last month, the Coast Guard announced that it had modified the contract with Eastern Shipbuilding to begin the construction of the second OPC, the future Chase, and to buy long lead-time materials for the third. The announcement noted that Argus’s delivery date had been pushed back to 2022, and Chase is set to deliver in 2023.

Shipyard president Joey D’Isernia commented on the struggles during the ceremony, stating that “the steel joined here today is unlike any you or I have seen before. This steel has been ravaged by 162 mph winds, generated by the 3rd most powerful hurricane to make landfall in this country’s history. This steel has borne witness to a pandemic that has caused fear and shaken our core. But through all this, it remains sturdy, it remains resilient, and today it will join with other steel to become stronger, more defined, and more resolute. Today is representative of how we build, and of unwavering resolve in the face of adversity for a Coast Guard and a nation that deserves nothing less.”