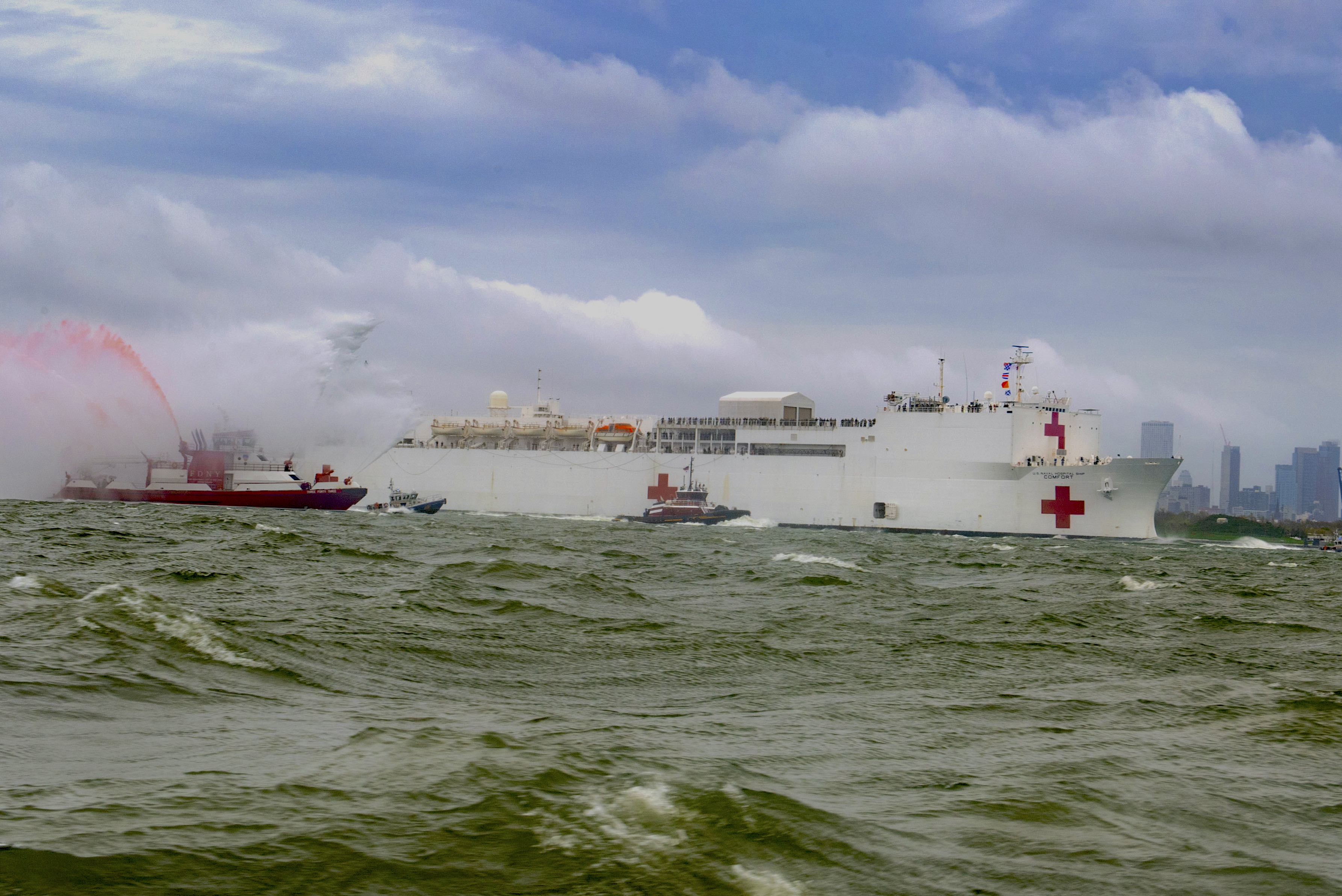 With an escort of water-spraying boats, hospital ship USNS Comfort (T-AH-20) pulled from a cruise ship terminal pier midday Thursday and departed New York Harbor for a return to its Virginia homeport on Saturday.

It’s unclear yet whether Comfort, with its 1,100-member military treatment facility aboard, will be reassigned to another location to support local authorities in COVID-19 response efforts led by U.S. Northern Command to support the Federal Emergency Management Agency. The ship will resume “reduced operating status 5” when it returns to Norfolk and awaits any future tasking, military officials said. That ROS-5 requires the ship to get underway, if called upon, within five days.

“While the ship is departing New York City, make no mistake, the fight is not over, and we stand ready to support the response to COVID-19 in whatever capacity we are needed,” Vice Adm. Andrew Lewis, who commands U.S. 2nd Fleet, said in a press release.

Comfort, which had been undergoing scheduled maintenance, was activated in mid-March and arrived in New York City on March 30 for the mission that military officials described as providing a “relief valve” for local hospitals that were expected to have been overwhelmed by COVID-19 infections amid the growing pandemic. But the ship treated 182 patients – far fewer than its 1,000-patient capability – and even after reconfiguring spaces to allow for treatment of COVID-19 infected patients and never saw the crush of patients as local stay-at-home orders resulted in fewer than expected trauma and surgical cases overall.

“In a perfect world, we wouldn’t have put a single person aboard this ship,” Capt. Joseph O’Brien, commander of Task Force New York City supporting the COVID-19 mission, told USNI News last week. “We would have pulled up here, the hospitals would have had excess capacity and not needed us – and I told the crew that from the very beginning. Our job has been to take the pressure off the hospitals.”

Capt. Patrick Amersbach, who commands the medical treatment facility, added that “the numbers were pretty much irrelevant to us. It was about the patient in front of us, and providing the greatest possible care.”

Navy officials noted that every patient treated aboard the ship was one fewer than local hospitals would have to help. Seventy percent of patients treated aboard the ship tested positive for COVID-19, and many suffered from rapid, multi-system organ failure that required ventilator support. Medical teams conducted more than 110 surgical procedures, including appendectomies, bronchoscopies, chest tube insertions, laparoscopic procedures and tracheotomies, accoding to 2nd Fleet. Radiology technicians performed more than 540 X-rays and CT scans, and the pharmacy department, which was aided by Army pharmacists, prepared more than 1,300 intravenous and oral medications for patients.

Comfort was part of a federally-led military response to the coronavirus relief effort in New York City that a federal military station established at the city’s Jacob Javits Convention Center.

“The success of this mission in New York City hinged on coordination with FEMA, state and local officials and the partnership between Comfort, the Javits Center and hospitals across New York and New Jersey,” O’Brien said in the press release. “We all worked towards the common goal of ensuring that every patient who required care was able to receive it. The Comfort team is proud to help during these unprecedented times.”