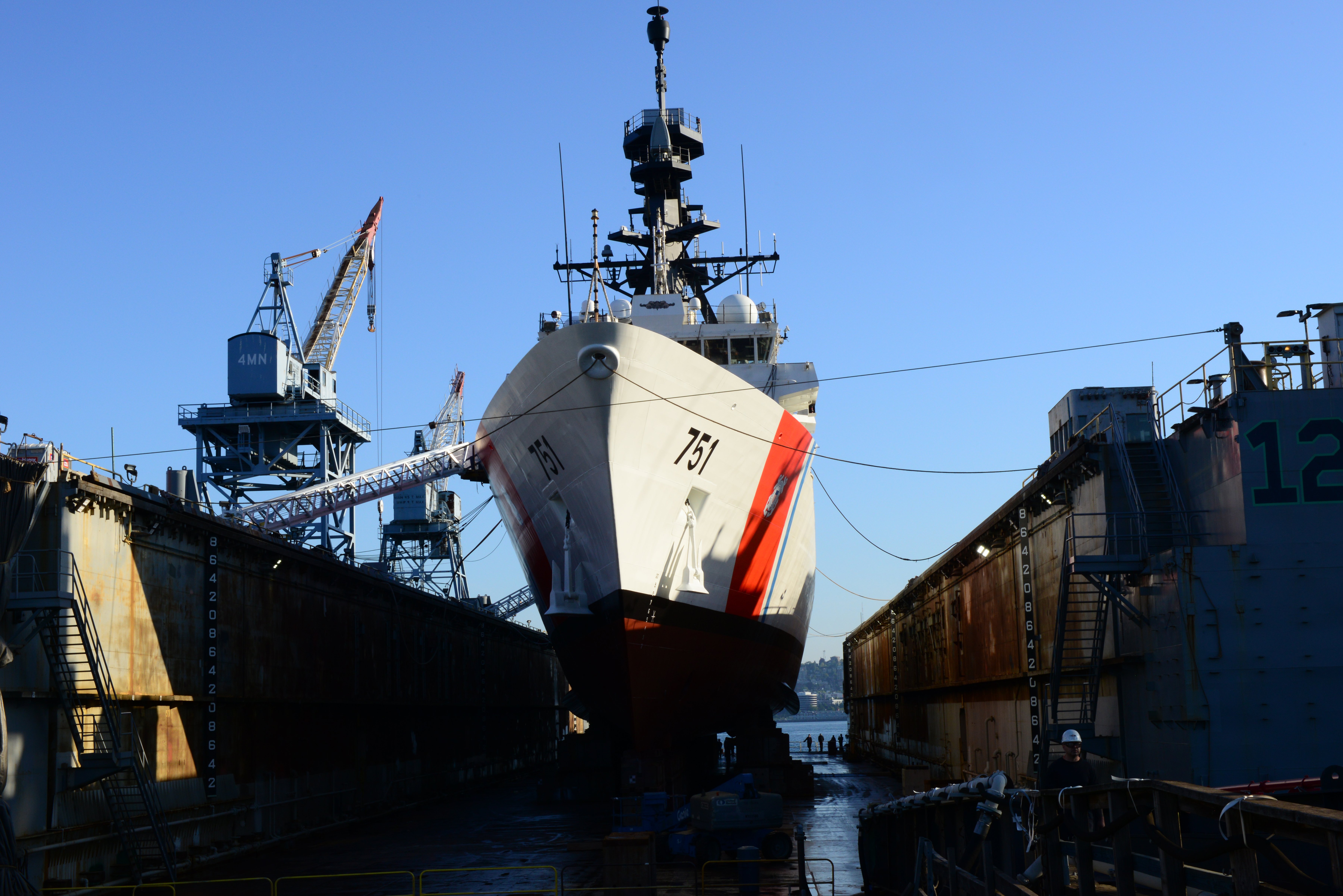 Coast Guard Cutter Waesche prepares to refloat from drydock in Seattle, Wash., May 22, 2018. The Waesche is a 418-foot Legend-class National Security Cutter homeported in Alameda, California. US Coast Guard photo.

SAN DIEGO, Calif. – The Coast Guard is struggling to get ship repair yards to bid on its work as the Navy is leaning on more of these same companies to help dig out of its own ship maintenance backlog – and with the Navy contracts being larger and more lucrative, the Coast Guard is realizing it must “change the way we do business,” its engineering official said.

Rear Adm. Nathan Moore, assistant commandant for engineering and logistics, said earlier this month that the Coast Guard has just one organic shipyard in Baltimore, Md. – which only meets part of the needs of the East Coast fleet and none of the needs elsewhere in the country. With the Coast Guard almost totally dependent on industry for its ship repair work, it is strongly feeling the impact of the Navy’s move to bring in a wider swath of industry to contribute to its own ship maintenance workload.

“As the Navy has pushed out into the commercial shipyard industry now in the last couple years, they really have sort of blocked out the sun in terms of our availability of using those commercial yards that we relied on,” Moore said at the WEST 2020 conference, cohosted by the U.S. Naval Institute and AFCEA.
“So if you run a ship repair business and the Navy wants to roll into dry dock and do a $40 million dry dock (availability) for an LHA, and we say, hey, how about our Coast Guard ship for $2 million? We just don’t see really any responses – almost no responses today to a lot of our dry dock and dock-side repair packages, which means we pay for the ones that do respond. So I think we need more coordination on that.”

He said the lack of competition is driving up the costs of the contracts they can award, and is leaving others without any interested bidders at all. 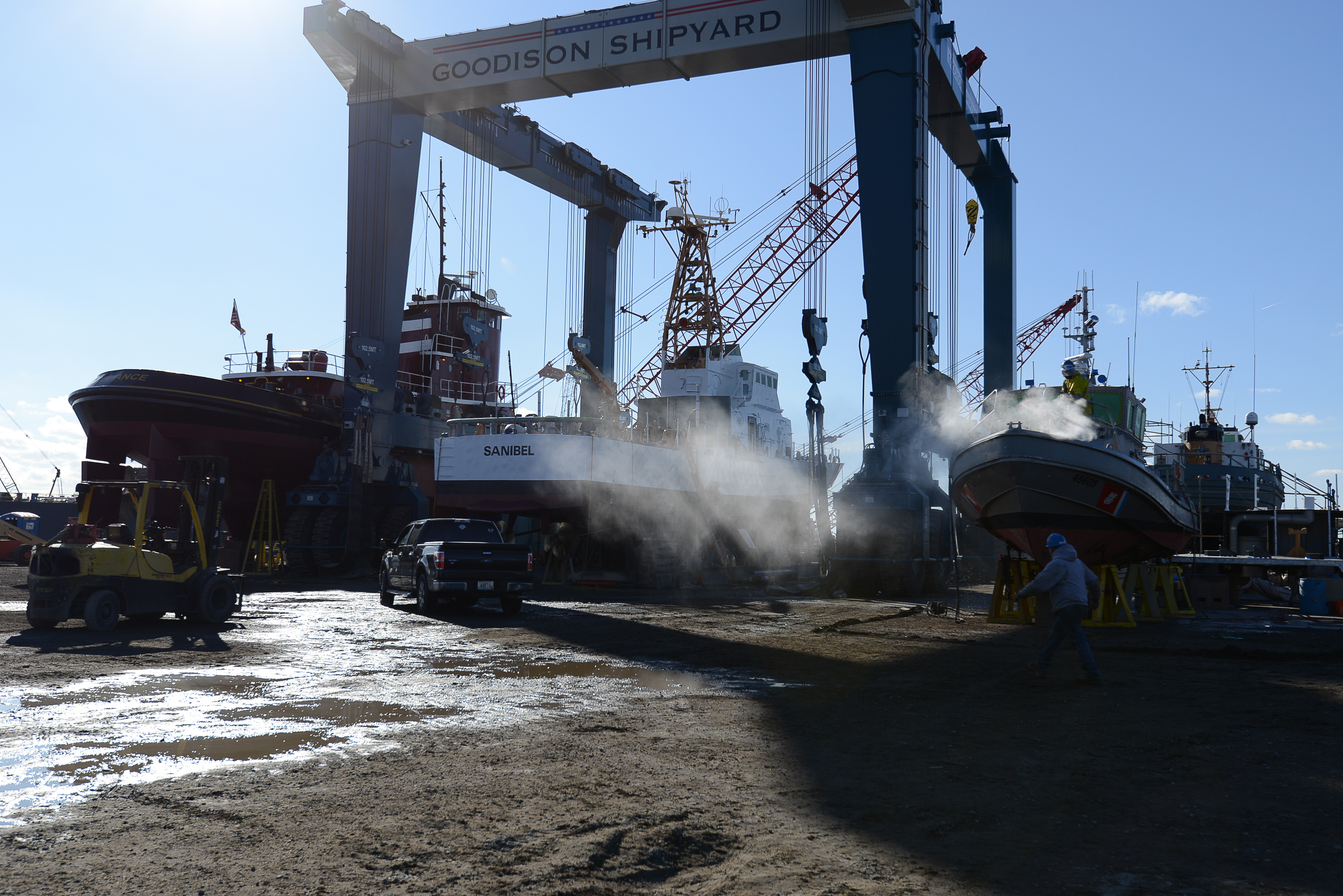 Coast Guard Cutter Sanibel is in drydock with Goodison Shipyard in Quonset, Rhode Island on Nov. 15, 2017. The Cutter is homeported in Woods Hole, Massachusetts. US Coast Guard photo.

Moore said the Coast Guard has been working with the Navy and industry to squeeze in Coast Guard ships as “filler work between Navy projects” with some success, but he’s hoping to see a more coordinated effort.

During the same panel discussion, Naval Sea Systems Command (NAVSEA) Commander Vice Adm. Tom Moore said that coordination could help the Navy too – which has been struggling with its industrial base to achieve on-time and on-budget maintenance availabilities. Part of this has to do with capacity: the yards do not have enough dry docks, and there’s little incentive for them to invest in new infrastructure when they’re not guaranteed a steady flow of funds due to things like continuing resolutions or budget-trimming efforts that often disproportionately affect readiness funds. They’ve also struggled with contracts being awarded too close to the start of a maintenance availability, meaning they can’t plan their workforce and material needs in advance, as well as with work packages changing once an availability has already started. The Navy has made a concerted effort in recent years to do more to make ship repair more stable, leading to better on-time delivery rates, but industry capacity still hasn’t grown much.

“I think we ought to sit down and talk about that, because stable predictable work in the ports is what gets us the performance level that we want, it gets industry to grow capacity,” Navy Vice Adm. Moore said during the panel conversation about teaming with the Coast Guard.
“So if there’s an opportunity for us to marry our maintenance programs up, I’m all ears, let’s have that conversation.”

One of the yards that the Navy has been most excited about is Vigor Shipyard, with a large shipyard in Portland, Ore., and a growing footprint in the Pacific Northwest, Alaska, and most recently in San Diego. The Navy previously used Vigor for work on support ships like submarine tenders or for emergent work that couldn’t be squeezed in elsewhere – but now the Pacific Fleet is relying on Vigor for a significant amount of maintenance work on its Littoral Combat Ship fleet, for example.

Coast Guard Rear Adm. Moore told USNI News after the panel presentation that “we work with Vigor all the time up in Seattle, they’ve been dry docking our icebreakers for years. As Vigor has acquired other smaller yards, we’ve worked with them in places like Alaska. The ship repair industry is a tough one because it’s something that we rely on solely because we don’t have another option. So whenever there’s any fluctuations in that industry, we feel it.” 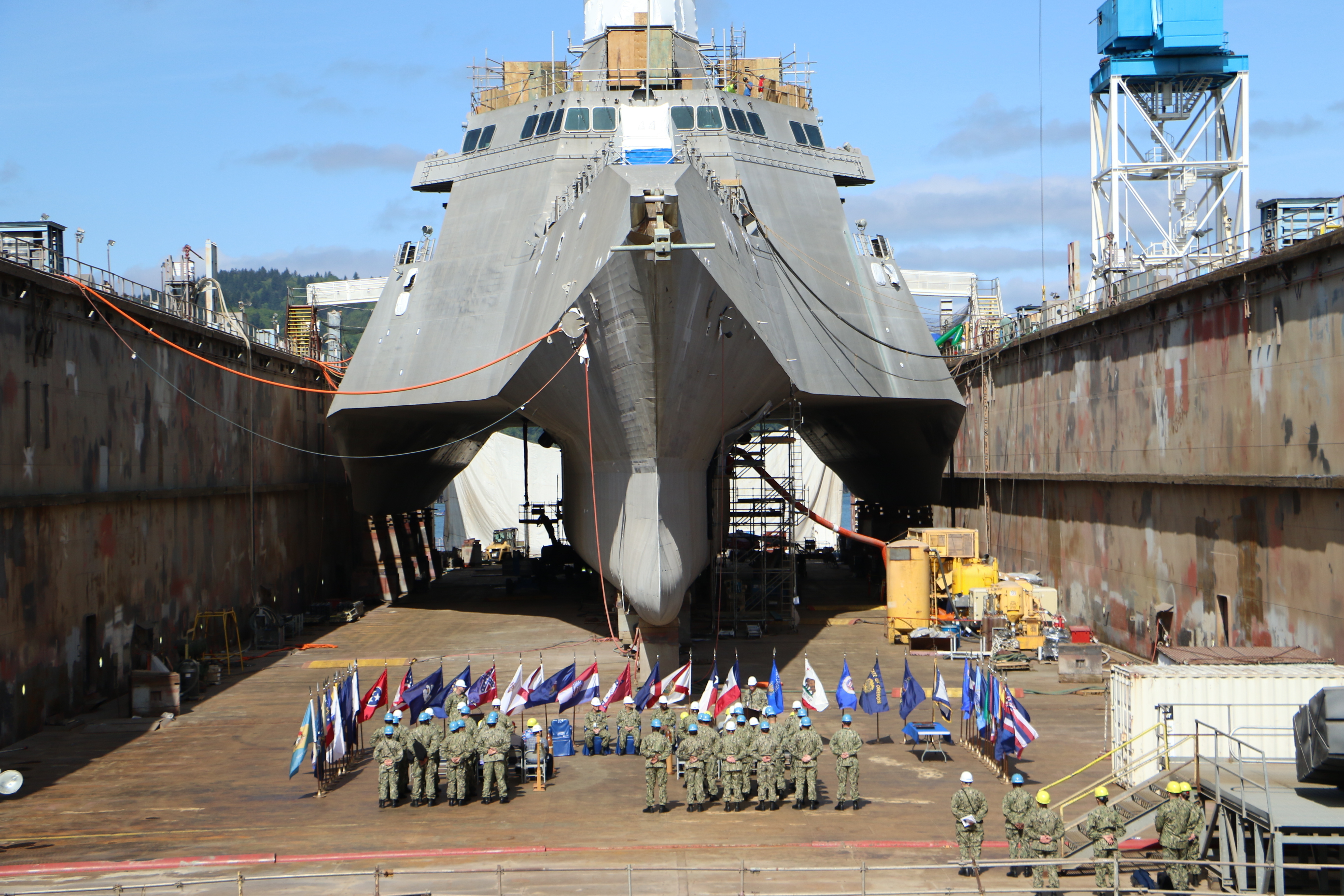 The crew of USS Coronado (LCS 4) listens as Capt. Matthew McGonigle, commodore and commander, Littoral Combat Ship Squadron ONE, gives a speech during the ship’s change of command ceremony at Vigor Shipyard in Portland, Oregon, on May 3, 2019. US Navy photo.

Rear Adm. Moore said the Coast Guard did have operational requirements driving its planned maintenance schedules, but he acknowledged that strictly adhering to those planned ideal schedules wasn’t working well for them. Going forward, the service will have to balance its operational needs with its need to find gaps in industry capacity to get ship maintenance done at a reasonable cost.

“The operational commanders, we have schedules designed for coverage for law enforcement, for search and rescue, for humanitarian response, that kind of thing, so any delay in a ship repair availability is really important to us too,” he told USNI News.
“The old way that we’ve done it of being very restrictive on dates in and out of the shipyards is not working well for us in terms of not getting competition. So I think to get competition, we have to sort of change the way we do business.”