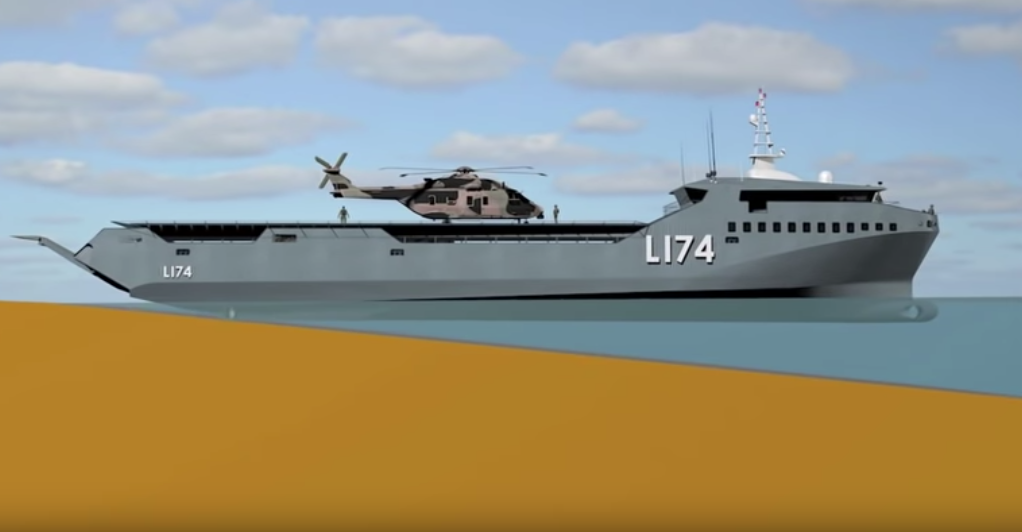 The Navy’s research and development portfolio will devote $30 million to a “next-generation medium amphibious ship design” that will likely be based on an Australian designer’s stern landing vessel.

Shortly after Commandant of the Marine Corps Gen. David Berger took command of the service in July 2019, he began speaking of a new vision for the amphibious force – one that did not rely on a fleet of 38 traditional amphibious warships that the service had fought for for years, but instead would continue to leverage the aircraft-delivery power of the amphibious assault ship (LHA/LHD) and the command and control prowess of the amphibious transport dock (LPD) but also invest in new alternate amphibs to help the Marine Corps disperse its people and gear around the littorals.

The Navy and Marines announced in the Fiscal Year 2021 budget request that they will seek a medium amphibious ship that can support the kind of dispersed, agile, constantly relocating force described in the Littoral Operations in Contested Environment (LOCE) and Expeditionary Advanced Base Operations (EABO) concepts the Marine Corps has written, as well as the overarching Distributed Maritime Operations (DMO) from the Navy. According to a budget overview document, “a next-generation medium amphibious ship will be a stern landing vessel to support amphibious ship-to-shore operations.”

The Navy and Marines had previously cited the Offshore Support Vessel as a possible inspiration for their new design. Naval Sea Systems Command had experience with the OSV through a foreign sales program with the Iraqi Navy, and with the vessel also potentially inspiring a Large Unmanned Surface Vehicle design, experts across the sea services were eyeing the benefits of that hull type.

Frank DiGiovanni, the deputy director of expeditionary warfare on the chief of naval operations’ staff (OPNAV N95B), said in September that his office had already kicked around the idea of the OSV for its operational value under the LOCE and EABO concepts, and Berger’s Commandant’s Planning Guidance added more urgency to look into the idea.

“He doesn’t call it an OSV, but he does say small, scalable, more maneuverable, flexible kinds of things. The OSV is certainly a class or a type of ship we’ve worked with before,” DiGiovanni told USNI News.

However, since that time, Marine Corps planners took another look at the features they’d need on this medium amphibious ship, rather than limiting their talks to existing ship designs, USNI News understands. Those talks led to a realization that they not only wanted a ship that could move Marines around with some range, but they also wanted the ship to be able to beach itself like a landing craft does, to help offload gear and vehicles as needed. These talks led to a new focus on the stern landing vessel designed by Australian company Sea Transport, which could serve as the new inspiration for the medium amphibious vehicle as requirements development and EABO wargaming and simulations take place.

The Sea Transport website advertises that its stern landing vessel design is “similar to conventional landing craft; however the SLV design has overcome the primary problems associated with conventional landing craft, including: Poor head sea capability due to bluff bow ramp, dramatically reducing speed; Poor visibility due to bow ramp; Crew discomfort and fatigue due to location of accommodation directly above machinery spaces; Inadequate power available when de-beaching due to propellers working inefficiently astern, and the need to overcome the forefoot suction effect,” and more.

The Navy and Marines are not committed yet to this design or to Sea Transport, but USNI News understands that something like a SLV would combine a surface ship’s ability to have great enough endurance and range to be operationally useful to commanders and a landing craft’s ability to beach itself to offload larger equipment. 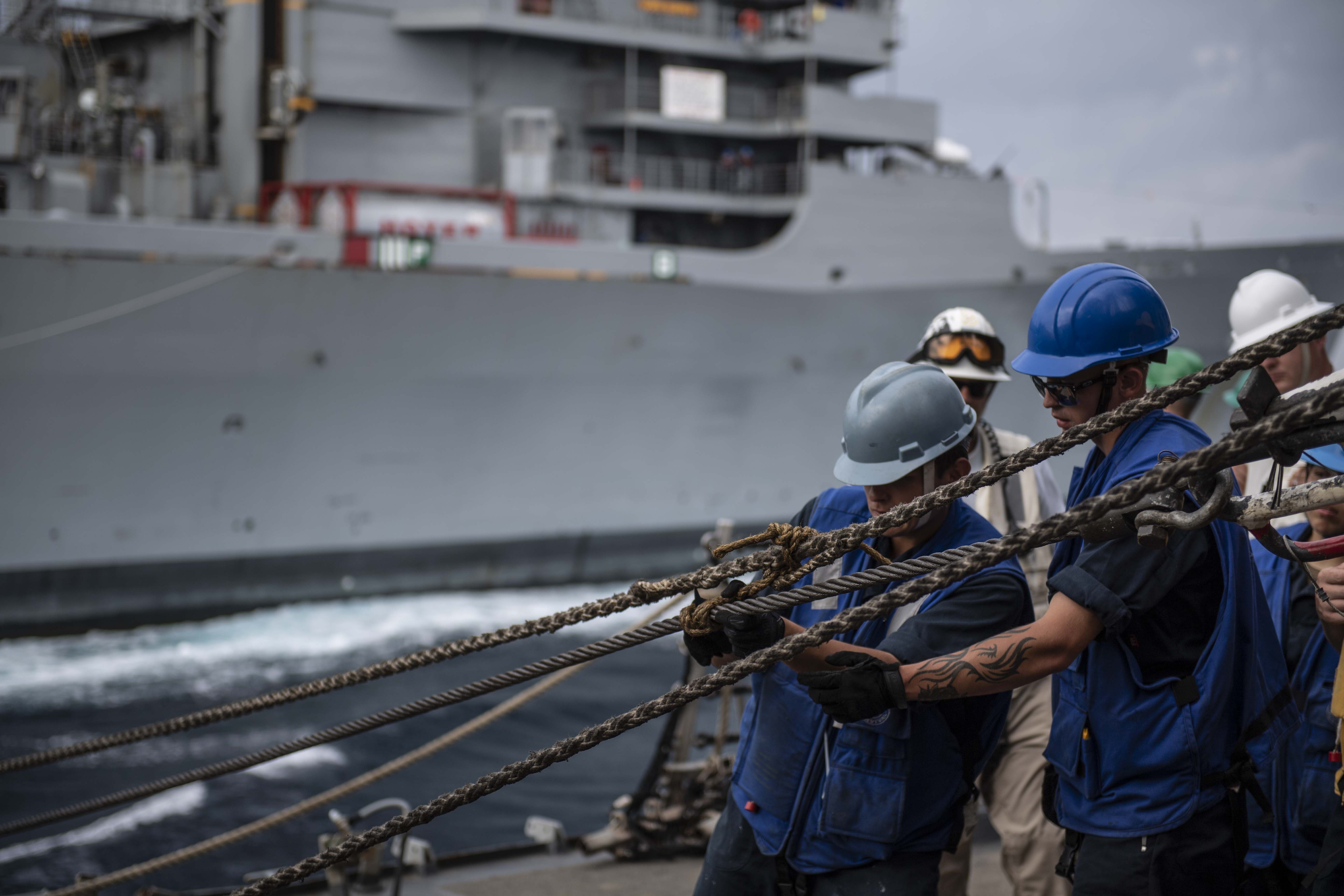 The research and development budget request also includes a variety of other initiatives for auxiliaries.

Another $30 million will be invested in a similar effort on a “next-generation medium logistics ship” to also support the distributed small-unit operations under EABO.

After conducting design maturation efforts this current year with four shipyards, in FY 2021 the Navy hopes to begin developing the detail design and construction request for proposals for the sealift variant of the CHAMP, which will move goods – in contrast to the variant that will cover the people-focused tasks such as maintaining submarines and aircraft at sea, commanding and controlling operations at sea and providing hospital care. In FY 2021 the Navy also hopes to develop the Capability Development Document (CDD) for the submarine tender variant, after the sealift variant should have its CDD approved this year. 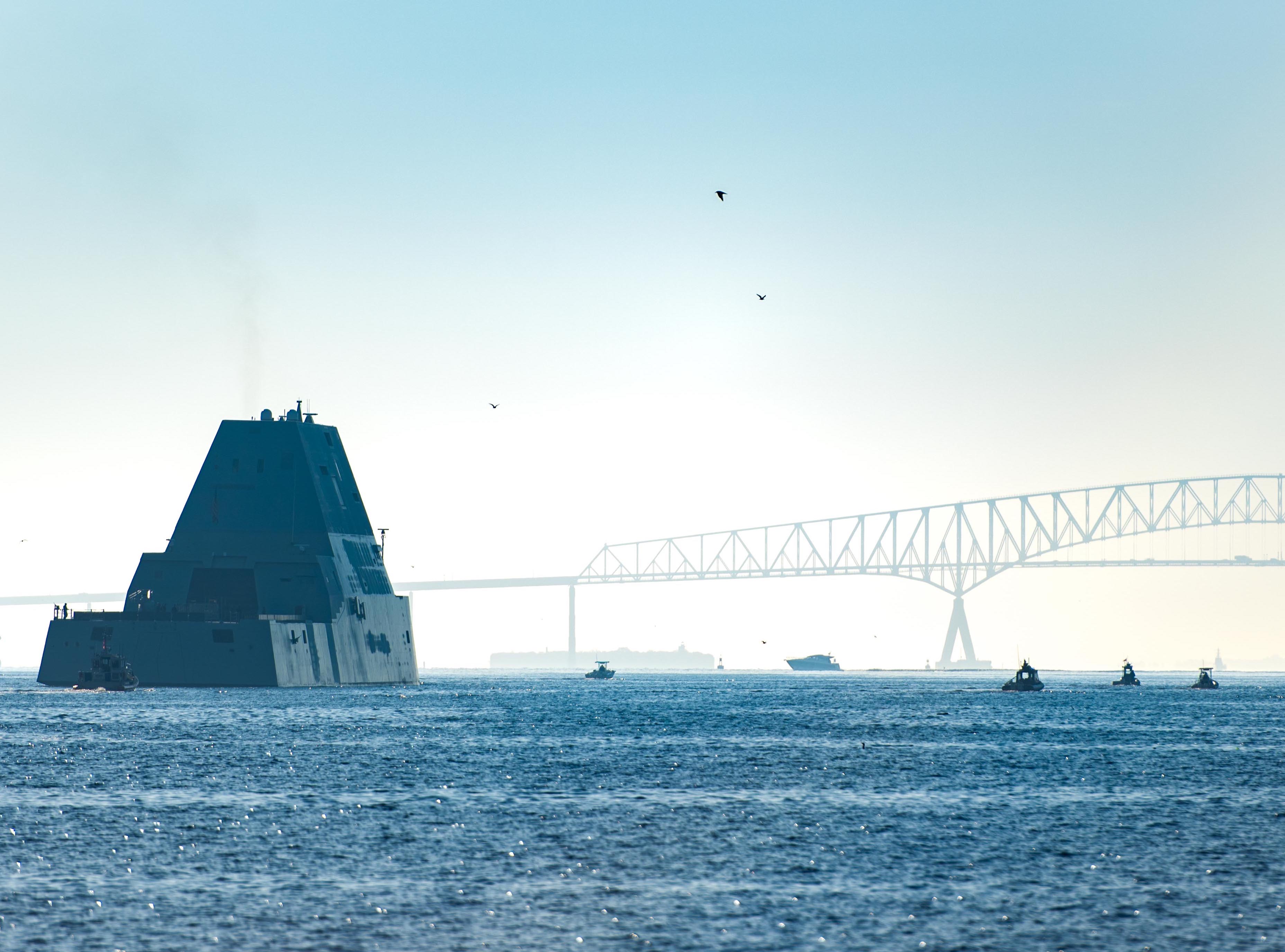 On the combatants side of the portfolio, two efforts will push forward the surface fleet of the future.

$21.5 million will fund conceptual work that “will lay the analytic foundation for the development of the Future Surface Combatant Force (FSCF). Ships produced from this effort will fill critical gaps in the fleet in the 2045 timeframe created by the decommissioning of CG 47, DDG 51, and LCS 1/2 ships. Unmanned surface vessels concepts and CONOPS will be developed to decouple mission capability from manned force structure.”

Specifically on the Large Surface Combatant program the Navy has been working on the past few years, $46.5 million will “transition (the LSC effort) from concept refinement and requirements development to a Preliminary Design Effort.”

“In FY 2021, the LSC program office will continue the efforts started in FY20, conducting additional cost vs. capability analyses, and concept feasibility studies to support development of a draft Capabilities Development Document (CDD) and draft specifications. A Set Based Design approach will continue to be utilized to narrow subsystem trade space, and develop a draft ship Concept of Operations (CONOPS). Industry engagement will be increased focused on producibility and affordability analyses,” reads the justification book.
“Upon approval of the draft CDD for LSC in Q1FY21, and execution of a successful System Requirements Review in 2QFY21 the Preliminary Design Phase will begin. During FY21 Initial Operational Capability (IOC) of the Integrated Power and Energy System Test Facility (ITF), comprising a digital twin of the ITF, engineering development models and prototypical equipment, will occur to address risks with critical systems.”