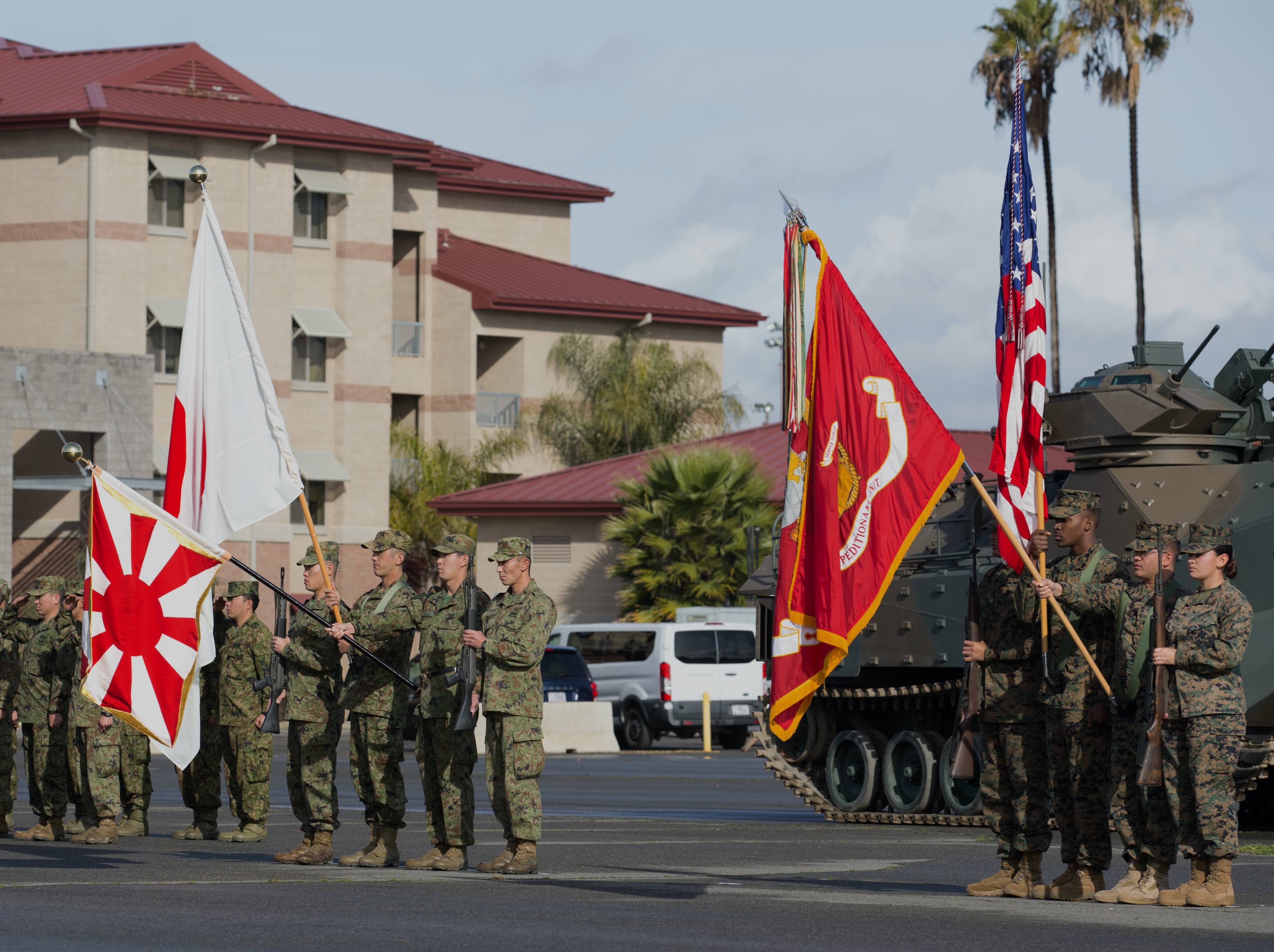 Tokyo has been moving at a rapid clip in the two years since it stood up its Amphibious Rapid Deployment Brigade, with training exercises held ashore and on ships with Marine Corps units in California and in Japan. The ARDB and its two regiments of “sea soldiers” were established with the mission to quickly deploy to defend Japan’s far-flung islands and respond to other threats like natural disasters and humanitarian crises.

This year’s exercise follows the trend of putting greater focus on the Japan Ground Self-Defense Force’s ability to plan and conduct combined amphibious operations including island-defense capabilities. The goal of the aggressive training schedule is “for us to become a world-renowned amphibious operation unit,” Col. Koji Hirata, the JGSDF’s deputy commander, said during the opening ceremony.

The exercise, which runs from Jan. 17 to Feb. 21, will provide the “intermediate goal” of training the ARDB’s 2nd Battalion Landing Team, 2nd Amphibious Regiment, which organized in March 2019 and “which will reach full strength next spring,” Hirata said.

Japan established the ARDB to better position its self-defense forces to thwart off and defend incursions into its 3,000-plus islands — particularly in the southwest including the disputed Senkaku Islands in the East China Sea. Tensions with China have been high in the last several months, like when China’s aircraft carrier Liaoning transited through Miyako Strait near the Senkakus. 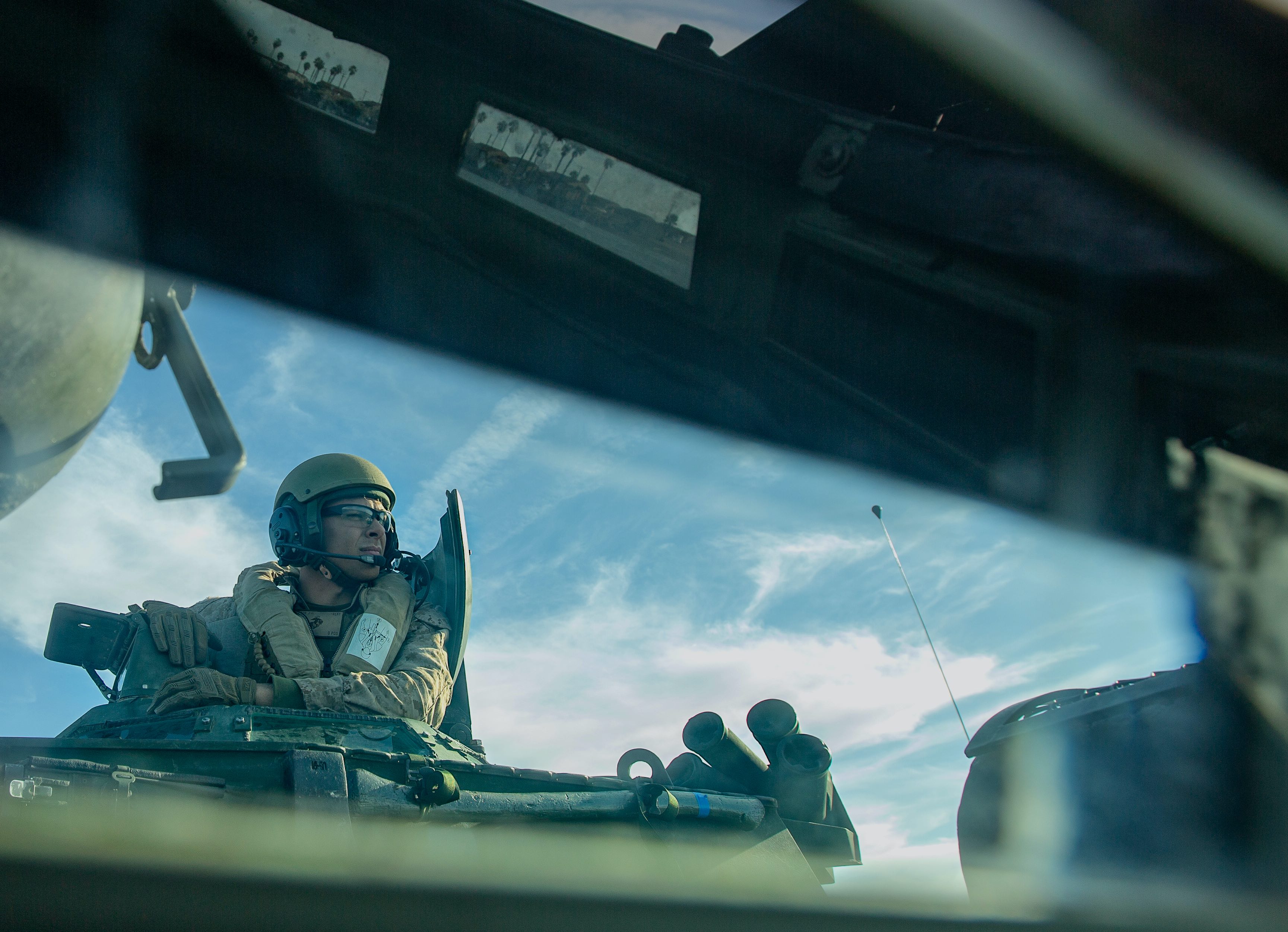 “The security environment surrounding Japan – especially along three strategic fronts, including China, North Korea and Russia – is becoming ever more severe, with dramatic shifts in the balance of power,” Hirata, speaking via a translator, told the audience in remarks during the ceremony. “In this situation, island defense is becoming much more important than in the past.”

“Taking the severe security environment around the Indo-Pacific region into account, the U.S.-Japan alliance has become much more important than before,” he said.
“Iron Fist, which aims to enhance the interoperability of the amphibious forces of the United States and Japan, is now extremely important.”

Hirata said exercises like Iron Fist help strengthen “our bilateral relationship and trust, which is the cornerstone of the U.S.-Japan alliance.” The exercise comes as U.S. and Japan officials mark the 60th year of the U.S. and Japan Treaty of Mutual Cooperation and Security, which was signed on Jan. 19, 1960.

“It is this enduring agreement that exemplifies the collective spirit of trust and cooperation that exists” between the American Marine Corps and Navy and the JGSDF, Col. Christopher Bronzi, who commands the 15th Marine Expeditionary Unit, told the audience. Iron Fist “allows us to demonstrate the continual dedication to the partnership between the United States and Japan, as well as our joint commitment to warfighting, readiness and interoperability.”

JGSDF soldiers and their command staffs will train along with their U.S. counterparts in amphibious staff training, advanced marksmanship, amphibious reconnaissance, logistics and medical support, and will conduct “some very complicated combined-arms, live-fire and maneuver events,” Bronzi said. “This training not only [improves] our proficiency in warfighting skills, but it also showcases our amphibious capability.”

“From sea and land, this training will stress the full spectrum of capabilities required to fully integrate and quickly deploy sea-based assets while providing military forces in a multinational maritime environment – an environment that continuously challenges our core competencies and stresses the need for proficiency in a broad range of operations, from humanitarian assistance to noncombatant evacuation operations,” he said.

“Capable naval expeditionary forces in readiness help ensure stability and prosperity around the world,” he added.
“It is multilateral exercises like Iron Fist that enable us to operate together in a dynamic maritime environment.”

Hirata encouraged the ARDB soldiers to “tackle their training with tenacity of purpose” and “advance and enhance” their capabilities and competencies to conduct bilateral operations.

Bronzi, who first trained with JGSDF soldiers during Iron Fist 2013, called them “great partners.” The shared experience of training in harsh conditions at sea or in challenging night live-fire training events “forms the foundation of our relationship as individual warfighters, as militaries and as partner nations,” he added. 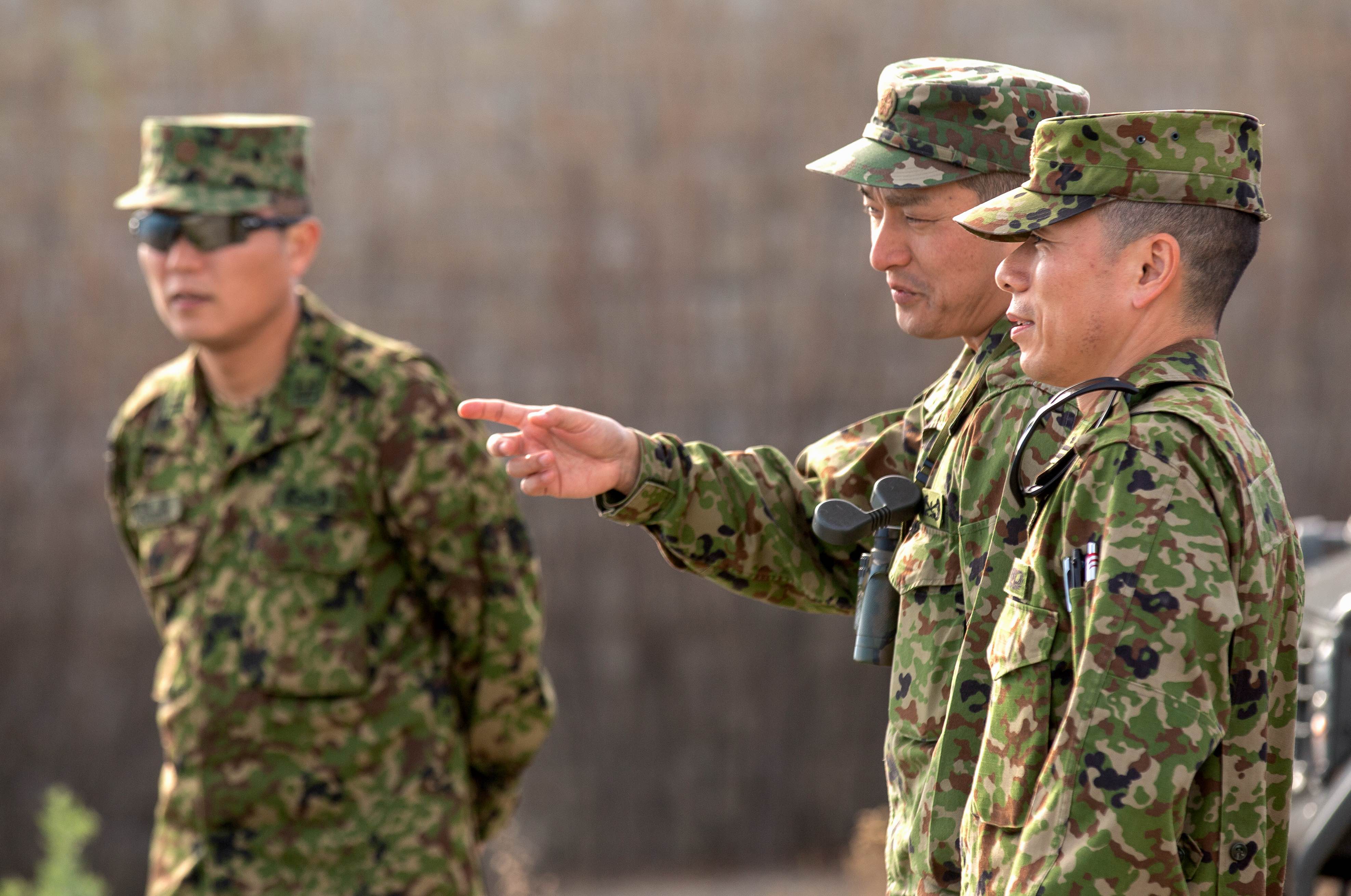 Bronzi recently took command of 15th MEU, which last year returned from a deployment to the Middle East, where it served as a command element for Special Purpose Marine Air-Ground Task Force Crisis Response (SPMAGTF-CR) for U.S. Central Command. So Iron Fist is “an ideal exercise for us to kind of cut our teeth on amphibious staff planning (and) get back out to sea… and just get used to how do you plan an amphibious assault,” he said.

Camp Pendleton will host the bulk of the training. But Marines and the JGSDF soldiers will board Pearl Harbor and Portland and train at San Clemente Island ahead of a planned amphibious landing at Camp Pendleton.

Last week, Marines and sailors with Combat Logistics Battalion 15 joined JGSDF soldiers for some medical training and drills with an MV-22B Osprey aircraft at Camp Pendleton. Other units participating include: 2nd Battalion, 1st Marines; 1st Battalion and 5th Battalion with 11th Marines; 3rd Marine Aircraft Wing; 3rd Assault Amphibian Battalion; 1st Air Naval Gunfire Liaison Company; and 1st Reconnaissance Battalion. Some of the infantry Marines with 2/1 will have some familiarity with their Japanese counterparts, since the battalion last year deployed to Japan and operated with the Okinawa-based 31st MEU.

“This has really advanced just in a few short years,” Bronzi said of the ARDB’s progression. Japan is “certainly a capable partner for us. I definitely believe we are better together, and we have been able not only to learn from them but to help them bring along some of their capabilities.” 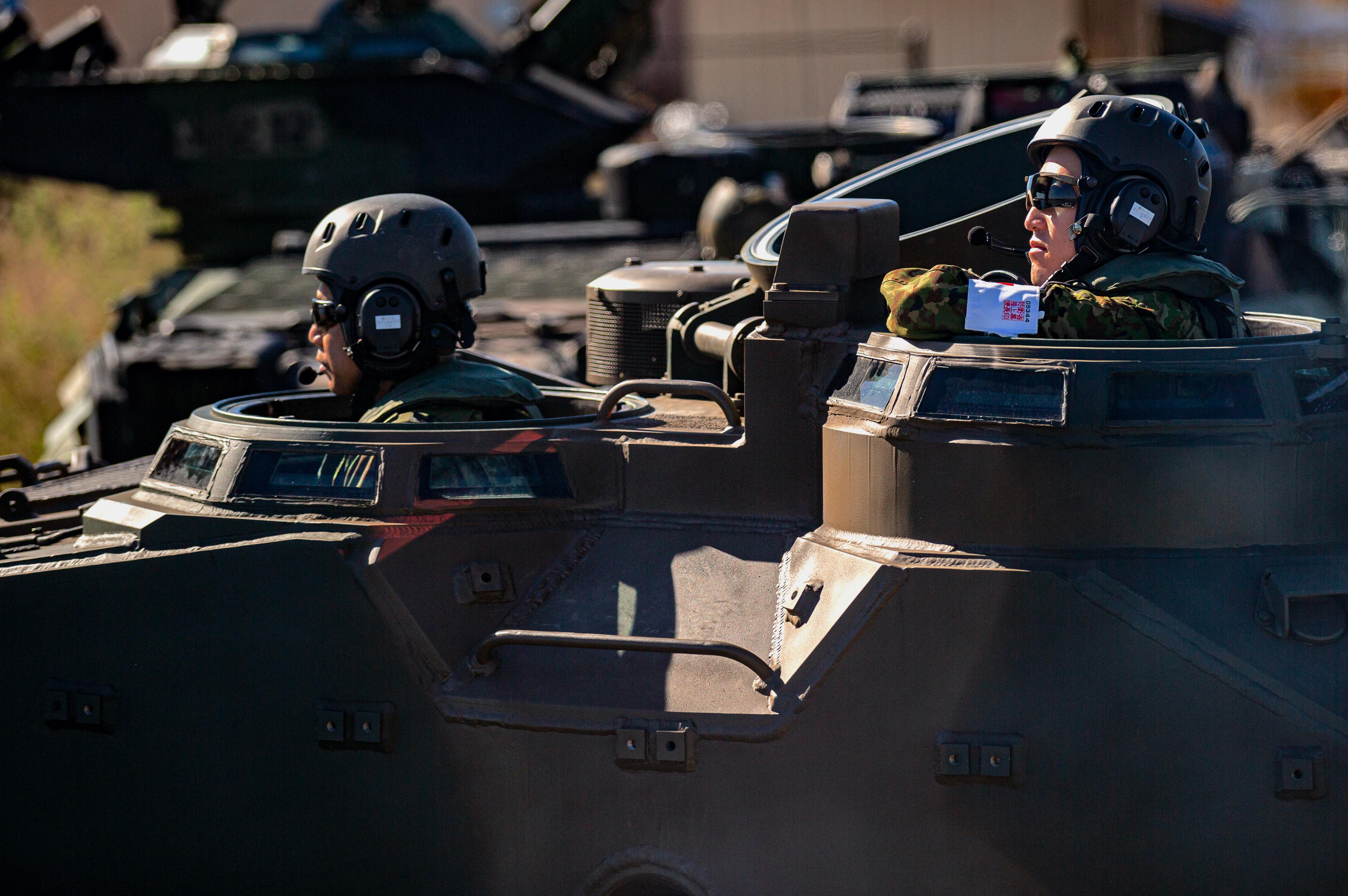 And this week, some 150 members of the 31st MEU are joining 500 JGSDF soldiers for exercise Forest Light in Kyushu, Japan. The exercise will consist of field training events including basic infantry skills, combined arms and vertical assaults integrated with MV-22B Osprey flight operations to enhance the collective defense capabilities of the U.S.-Japanese alliance, according to the 31st MEU.