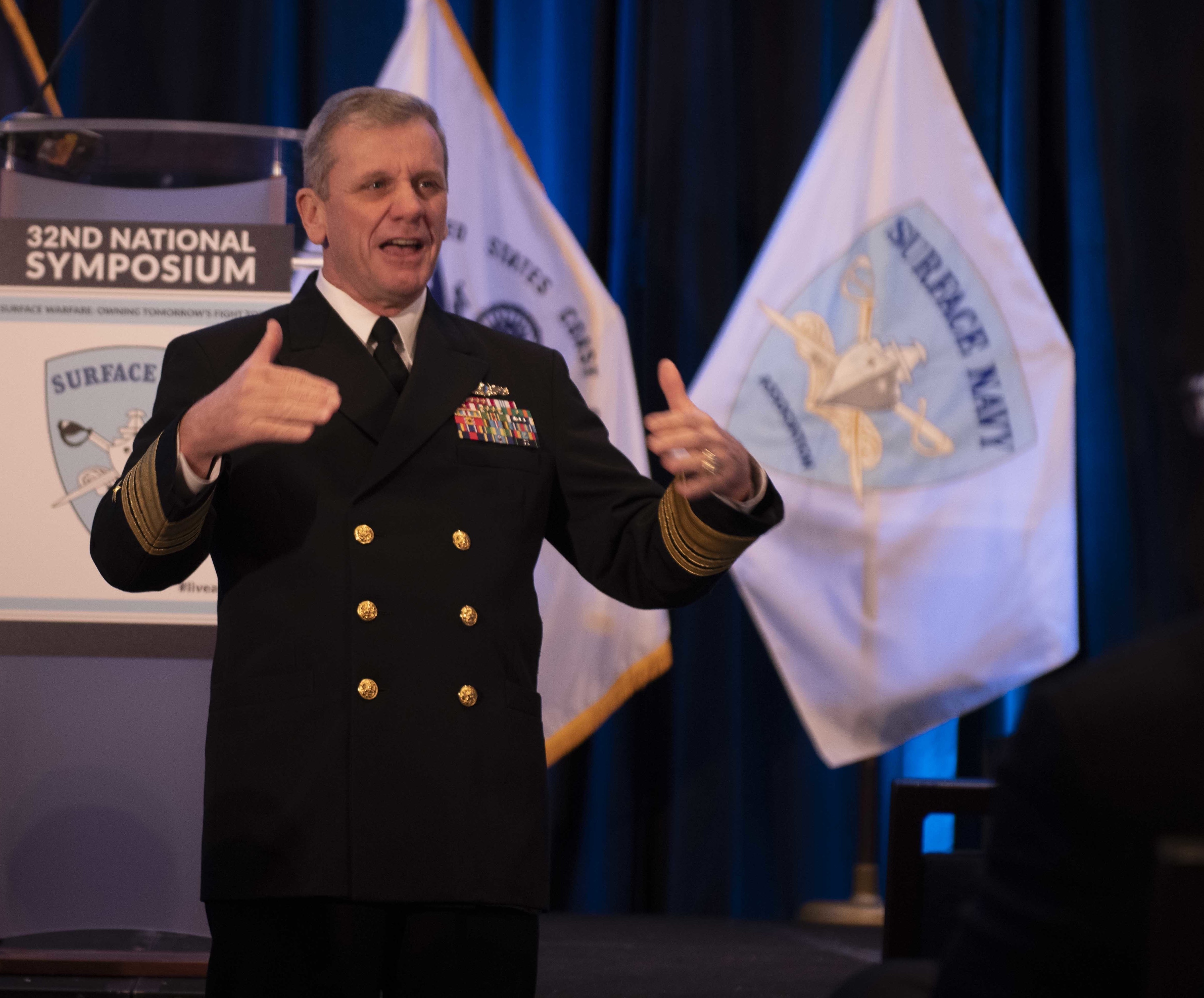 ARLINGTON, Va. – The Readiness Reform and Oversight Council created in the aftermath of two fatal surface ship collisions has proven to be a useful “barrier-removal organization” that the head of the surface force would like to see remain in place for years to come.

Vice Adm. Richard Brown said Tuesday at the annual Surface Navy Association conference that he isn’t looking to just check off recommendations made in the aftermath of the collisions but rather use them to create systemic changes – and the RROC is giving him a direct line to service leadership to make that happen.

The RROC is chaired by the under secretary of the Navy and the vice chief of naval operations. It was stood up in late January 2018, and a one-year status update report from the RROC in February 2019 noted that 91 of the 111 recommendations had been implemented.

Of those 111, 47 are specific to surface warfare. Brown said this week that he was getting ready to report to the RROC for its next yearly update report that all 47 of his items are now considered implemented – but he’s not satisfied with just implementing changes and then going back to business as usual.

“Not only will we implement initiatives, we’re going to then transition those initiatives to the requisite officer who has primary responsibility; then we will track it; and then we, at a future date, will determine whether the end states and the outcomes that we desired were actually met. If that is then the case, we will call it complete,” he said. And that’s where the RROC will be helpful.

“I have been advocating that the RROC remain in place for years to come – it is a focusing and barrier-removal organization second to none,” Brown said.
“Where there was a lot of angst about the RROC and providing oversight and they’re going to get into our stuff, the surface community actually embraced it and said, more of it.”

For example, Brown said, at one point there was a significant cut to funding for contract services, which to others in the Navy may have sounded like a good opportunity to save money for higher priorities. The admiral said he went to the VCNO and, upon confirming the cut would take place, said, “you just cut 36 instructors out of [Center for Surface Combat Systems] in Dahlgren, you just cut 43 instructors at [Surface Warfare Officers School], and 17 of the new instructors that we just bought the manpower for … for the Maritime Skills Training Centers, we can now not hire,” he said, with improved training being a focus of the post-collisions reviews and recommendations.
“What would have happened under normal business in D.C. under OPNAV? ‘We’ll shelve that, we’re going to talk about it at the Presidents Budget ‘21 build, and blah blah blah blah blah.’ We had it fixed that week, because we had RROC, and we put it on the table and they went, oh no, change that back.”

Brown, since taking over the surface force in January 2018, has tried to address all barriers to readiness – manning, ship maintenance and material condition, training and more – and the RROC allows him to do so in a holistic way.

Noting the range of factors that contribute to a ready force, Balisle said at the event, “most of them are under the control of a unique and different person, and none of those people ever come together really under a centralized command group who has real cognizance and knowledge of what’s going on in each of those spokes. So you have very well-intended people making good decisions about one of the spokes and not realizing what they’re doing to the others. This is made more critical in times of difficult budgets. … When the money is not there and you have to make tradeoffs, and then you don’t have these coordinations between the different areas, you are asking for some serious, serious trouble.”

Brown said in response that that was the aim of the RROC, and two years later Brown said he believes the RROC is fulfilling that exact purpose.