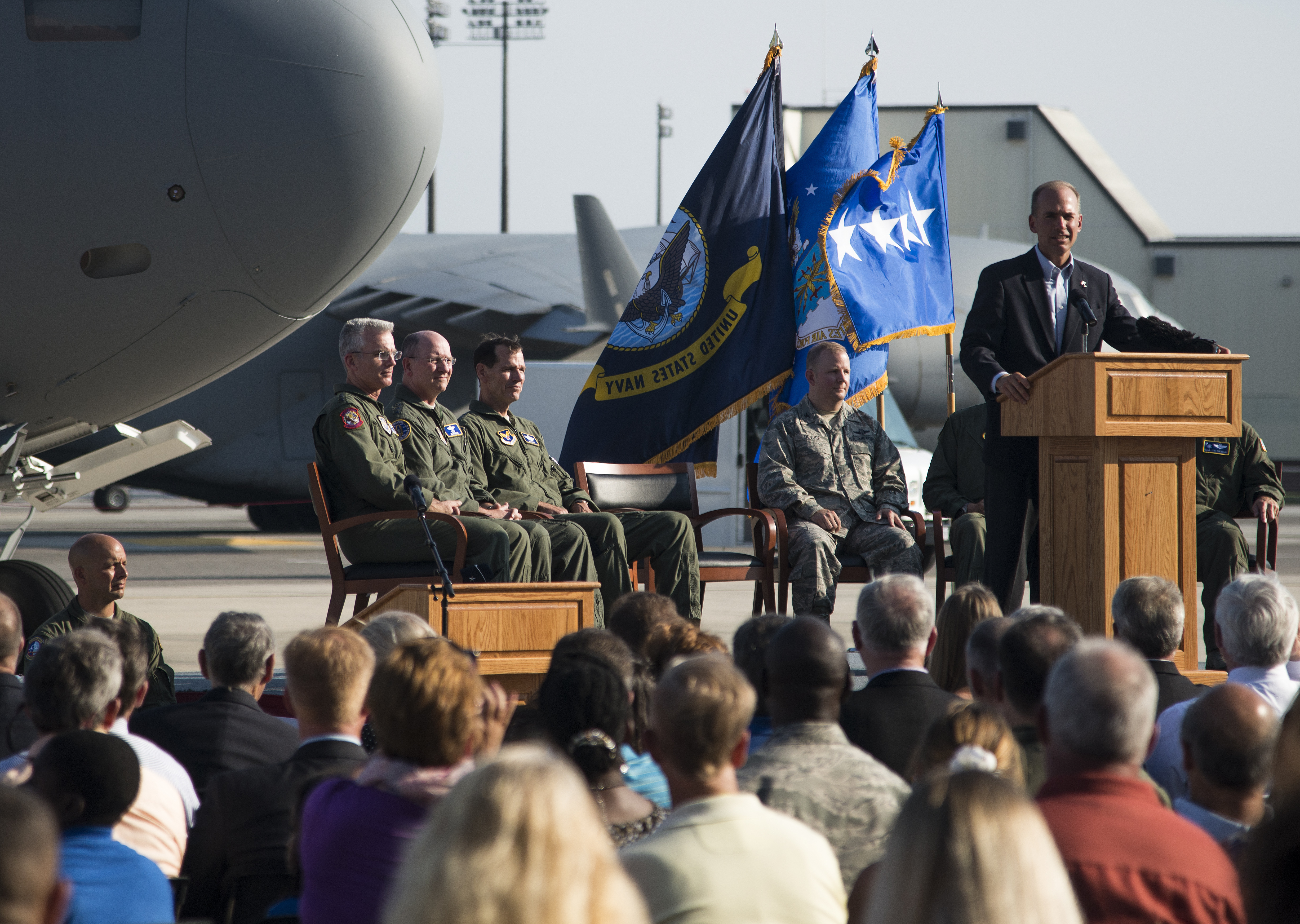 Mr. Dennis Muilenburg, president and CEO of Boeing Defense, Space and Security, speaks to the audience Sept. 12, 2013, during a ceremony commemorating the delivery of the final U.S. Air Force C-17 Globemaster III, P-223, at Joint Base Charleston – Air Base, S.C. (Air Force photo)

Capping a year of bad news for Boeing, maker of the beleaguered 737 Max airliner and a vareity of military aircraft, announced Monday morning Chief Executive Dennis Muilenburg was resigning immediately.

David Calhoun, current chairman of Boeing’s board of directors, will become the new chief executive on Jan. 13, after he ends his non-Boeing related commitments. Current board member Lawrence Kellner replaced Calhoun as the board chair, according to a company statement.

“On behalf of the entire board of directors, I am pleased that Dave has agreed to lead Boeing at this critical juncture,” said a statement released by Kellner “Dave has deep industry experience and a proven track record of strong leadership, and he recognizes the challenges we must confront. The board and I look forward to working with him and the rest of the Boeing team to ensure that today marks a new way forward for our company.”

Muilenburg leaves Boeing after 33 years of working for the aircraft industry giant. In 2018 he was paid $23.4 million in salary, bonus, stock awards and other compensation. The company’s board rewarded Muilenburg for Boeing’s “record operating cash flow, revenue, operating earnings and commercial airplane deliveries,” according to the company’s financial reports.

Early in 2019, though, Boeing’s entire global fleet of 737 Max airliners was grounded following a pair of deadly 737 Max crashes in October 2018 and March 2019. A total of 346 people died in both incidents, which federal and international investigators have linked to a flight control software called Maneuvering Characteristics Augmentation System or MCAS.

Earlier this month, Boeing announced it was halting production of the 737 Max aircraft. The company continued building the airliners during the grounding, resulting in more than 400 new 737 Max aircraft parked at storage facilities, according to the company.

However, the defense side of Boeing’s business has remained a bright spot for the company. Boeing continues making F/A-18 Super Hornet fighters for the Navy. The company was awarded an $805-million award in August 2018 to build the first four unmanned carrier-based aerial refueling tankers, the MQ-25A Stingray. Ultimately, the Navy wants to purchase 72 more vehicles, for a program price of roughly $13 billion.

Boeing also beat out Lockheed Martin for a pair of Air Force contracts in 2018 – $2.38 billion to replace the Air Force fleet of H-1 Huey helicopters and $9.2 billion for the new fleet of Air Force T-X trainer jets.

Discussing the contract awards with analysts in October 2018, Muilenberg said Boeing’s bids were lower than competitors because the company could afford to spend significant time and money on developing the concepts.

With strong sales from the company’s much larger commercial airline side of the business, Boeing could do things such as conducting the MQ-25 competition’s minimum required testing, but also perform engine testing and build a prototype that started flight testing in 2019.

But landing several important Pentagon contracts can’t overcome the drag on its bottom line caused by grounding and now halting production of the 737 Max.

In 2018 Boeing built more than six times the number of 737 airliners – 580 for the year – than all the defense aircraft built during 2018, a total of 96 F/A-18 Super Hornets, F-15 fighters, P-8 Poseidon aircraft and helicopters. Most of those 737 airliners are sitting idled, undelivered. Getting these aircraft flying appears to be the primary focus for the company now.

“I strongly believe in the future of Boeing and the 737 MAX. I am honored to lead this great company and the 150,000 dedicated employees who are working hard to create the future of aviation,” said a statement from Calhoun.

Boeing [NYSE: BA] announced today that its Board of Directors has named current Chairman, David L. Calhoun, as chief executive officer and president, effective January 13, 2020. Mr. Calhoun will remain a member of the Board. In addition, Board member Lawrence W. Kellner will become non-executive Chairman of the Board effective immediately.

The Company also announced that Dennis A. Muilenburg has resigned from his positions as Chief Executive Officer and Board director effective immediately. Boeing Chief Financial Officer Greg Smith will serve as interim CEO during the brief transition period, while Mr. Calhoun exits his non-Boeing commitments.

The Board of Directors decided that a change in leadership was necessary to restore confidence in the Company moving forward as it works to repair relationships with regulators, customers, and all other stakeholders.

Under the Company’s new leadership, Boeing will operate with a renewed commitment to full transparency, including effective and proactive communication with the FAA, other global regulators and its customers.

“On behalf of the entire Board of Directors, I am pleased that Dave has agreed to lead Boeing at this critical juncture,” Mr. Kellner said. He added, “Dave has deep industry experience and a proven track record of strong leadership, and he recognizes the challenges we must confront. The Board and I look forward to working with him and the rest of the Boeing team to ensure that today marks a new way forward for our company.”

Mr. Calhoun said, “I strongly believe in the future of Boeing and the 737 MAX. I am honored to lead this great company and the 150,000 dedicated employees who are working hard to create the future of aviation.”