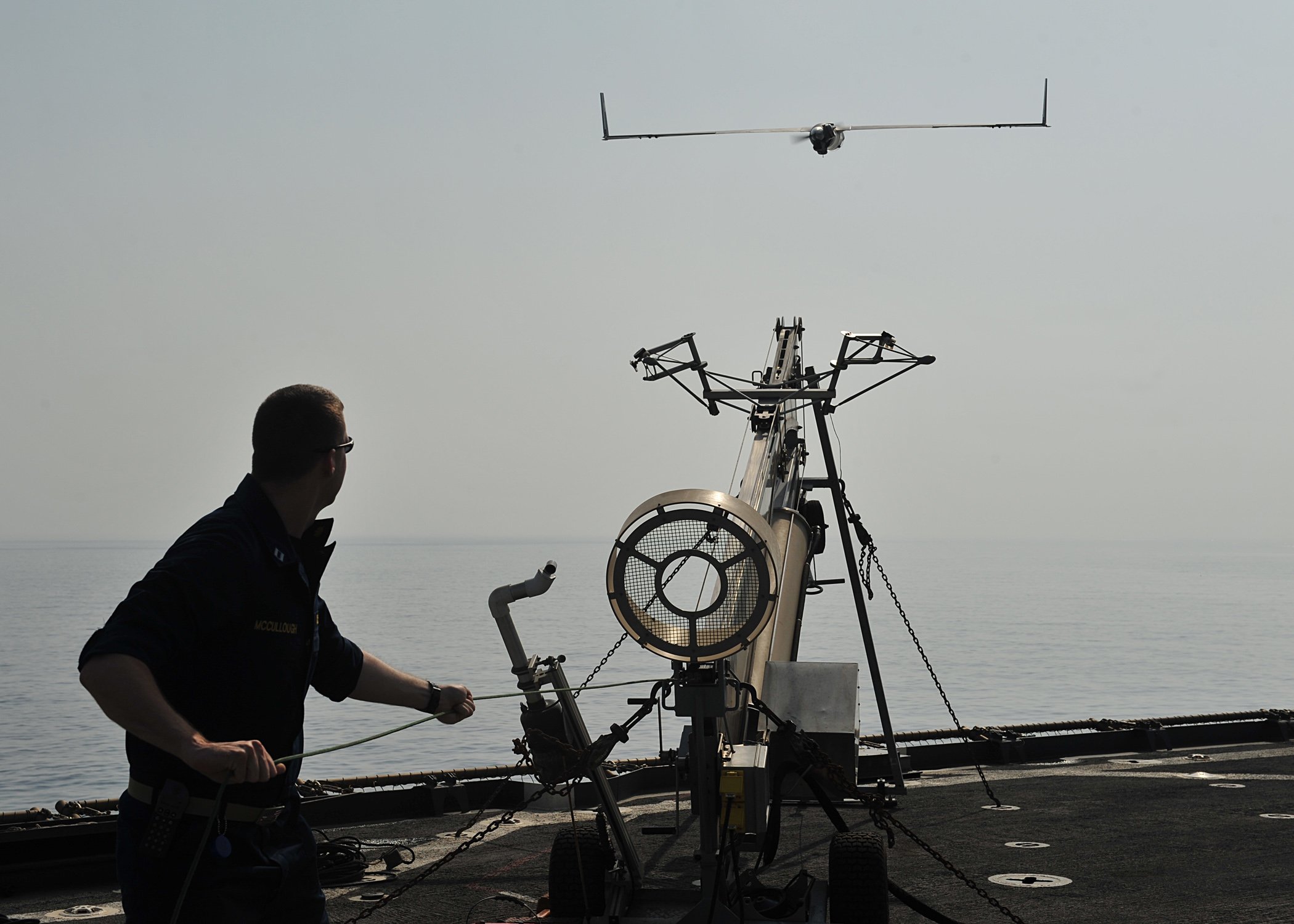 Developing updated unmanned scout planes is the best way for the U.S. to have eyes on China’s military actions in the Taiwan Strait and the South China Sea, according to findings in a new Hudson Institute report.

“A fleet without eyes cannot fight,” said Seth Cropsey, a senior fellow at the Washington think tank, quoting the maxim when discussing the report he co-authored, “If You Can’t See ‘Em, You Can’t Shoot ‘Em.”

The U.S. needs long-range and persistent eyes to provide intelligence, reconnaissance, surveillance and targeting (ISR/T) “before conflict.” The rationale, Cropsey said, is that today Beijing “can concentrate forces” quickly to strike Taiwan or assert its will in the South China Sea using the bases it has built on artificial islands before the United States could know what is happening.

The 2018 defense authorization bill pointed the Navy toward looking at long-range, persistent eyes when the fleet “is operating in a satellite-denied environment,” a strong possibility in a 21st-century conflict, said Bryan McGrath, managing director at FerryBridge Group, who co-authored the report with Cropsey.

“Neither the Navy nor the Defense Department, no one, really knows what the Navy’s ISR/T [assets] are in the [Western Pacific]” that could provide this necessary early warning, McGrath said.

The 2018 National Defense Strategy also directed the military to keep an adversary from making any aggressive moves by shifting towards “deterrence by denial,” McGrath said. The new strategy marked a significant shift from America’s earlier strategy of responding to an attack by “having the cavalry coming over the horizon.” The new strategy relies heavily on intelligence, surveillance, reconnaissance and targeting (ISR/T).

The question is “do we have the ISR to support those weapons,” such as Tomahawks with extended ranges, that back up a “deter by denial” strategy, McGrath said. Unmanned systems could close the gap by providing accurate, up-to-date targeting data. Operating unmanned systems also alert commanders of armed Chinese surface vessels that could pose challenges even in peacetime, McGrath said.

For the report, Cropsey and McGrath focused on unmanned aerial systems and presumed no ally or partner would assist the United States in monitoring Chinese movements in the Pacific.

The report recommends accelerating the purchase of and increasing the quantity of MQ4-C Tritons the Navy intends to purchase. With 20 Tritons assigned to the Pacific, “we would have a difficult time targeting” all the Chinese warships operating there, according to the report.

Currently, the Navy plans to purchase 70 Tritons. With more of these long-range systems available, the Navy could eliminate the existing “24-7, 365-day targeting problem [it has] in the First Island Chain” off the Chinese mainland.

Moving MQ-9 Reapers from the Middle East to the Pacific and modifying them for maritime use is another way to close the ISR/T gap. Still, Cropsey said this is a robbing Peter to pay Paul approach to the more significant problem facing commanders their areas of operation.

The Navy should also consider acquiring a medium-altitude, long-endurance (MALE) UAV to collect targeting data, and should ensure the vehicle could be launched and recovered by surface combatants, according to Cropsey and McGrath. Such a UAV could efficiently and effectively fill a portion of the ISR/T coverage gaps.

Another option, according to the report, is for the Navy to consider modifying the MQ-25 Stingray UAV, currently designed and intended to serve as an unmanned refueling tanker for carrier-based fighters. Instead, the Navy could evaluate the MQ-25A also carrying an ISR/T data-gathering suite. Doing so could provide the carrier air wing with organic ISR/T and allow the CVWs to rely less on non-traditional ISR currently being conducted by F/A-18E/Fs and EA-18Gs.

In March 2017, the Navy revised its MQ-25A plan, emphasizing the tanking mission and downplaying the need for the unmanned platform to perform ISR/T missions.

The Navy and Pentagon should have an “outside assessment of all sensors available and their capabilities” to set a baseline for future action, Cropsey and McGrath said.
“We need volume [in the number of unmanned systems] and some more exquisite stuff when you don’t want the other guy knowing what you’re doing.”