THE PENTAGON – The Navy’s ability to keep on track its top acquisition program, the Columbia-class ballistic missile submarine, rests heavily on its ability to keep the Virginia-class attack boat program on track – something the two submarine builders have struggled with in recent years amid challenges with their workforce and supplier base as the Virginia program increased to a two-a-year production cadence.

Still, despite challenges with the Block IV Virginia submarines and keeping them on schedule, the presidents of both General Dynamics Electric Boat and Huntington Ingalls Industries’ Newport News Shipbuilding are confident they’ve learned the right lessons from their Block IV struggles and are ready to move into Block V – the contract for which was signed yesterday – on time and on cost to provide a good foundation upon which they can build Columbia.

Newport News Shipbuilding President Jennifer Boykin told reporters ahead of the Dec. 2 contract award announcement that Block IV construction got off to a difficult start for a slew of reasons.

“In the beginning of the block, we were really trying to get to a two-per-year cadence. We certainly had challenges with material upfront, with the supply base, with labor, we didn’t have all the facilities that we have now,” she said at a media roundtable here.
“We did struggle initially getting to that two-per-year cadence. We’ve invested in all those areas and we’ve really understood what got us” to a better place heading into Block V, which officially kicked off construction in September.

In addition to improving how the yard trains new and experienced employees alike, she said the company has also changed its approach to how it works with its vendors. Newport News Shipbuilding has more engineers and more supplier quality personnel embedded within the vendor base to ensure high quality, catch performance issues early and spread lessons learned to the thousands of companies big and small that contribute to submarine construction.

“From a standpoint of training, workforce readiness, supply base readiness and oversight, and facilities, I think we’ve got everything foundational” that the yard needs to be successful with Block V despite challenges that led to delivery delays in Block IV.

Kevin Graney, who took over as president of Electric Boat in September, said during the roundtable that, despite the delays, he’s seen performance improvements over recent years that make him confident Block V will execute well and allow for success in the Columbia program, too.

He said his confidence is “based on the amount of run time we’ve had with new employees coming in already – it’s not something that we’re starting today, we’ve been doing that for a while,” he said of the 15,000 new employees the Connecticut and Rhode Island work sites have brought in since 2011.
“I think our performance – at the current average (construction time) of about 68 months per build, down from 88 – is stable and will continue to be stable right through Block IV into Block V. That’s what gives us confidence.” 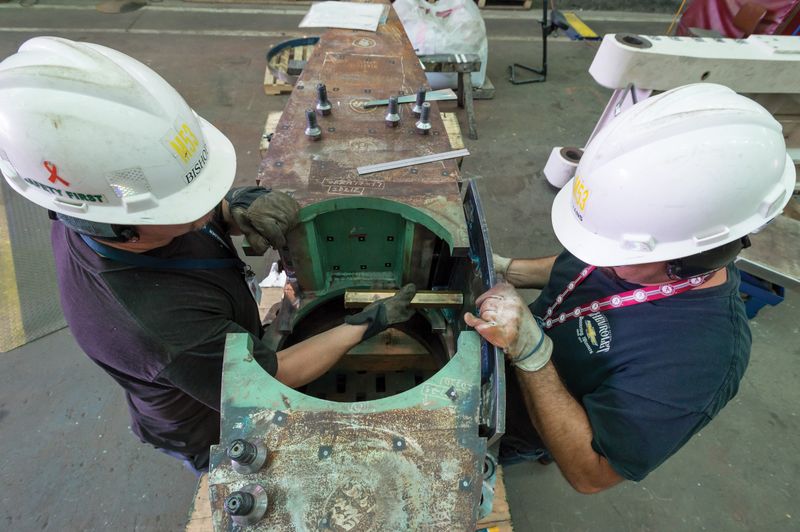 Mike Bishop, left, and Daniel Evans fit a plate to the fixed group on a dive plane for Indiana (SSN-789) in 2017. HII Photo

Newport News Shipbuilding, for its part, has brought in more than 10,000 new employees in the last three years for its submarine and aircraft carrier programs. Boykin said she expected to bring in about 1,500 more in the coming years to support the increase in submarine work, and Graney said he expects 13,000 more employees to be hired between now and 2027, making improvements in recruiting, training and retaining important to the success of the Virginia-class program.

But both yard presidents say they don’t feel they are bringing in an untrained workforce; rather, the pipeline that brings new personnel to the yards from community colleges, vocational schools and other industries is recruiting better trained people than before.

“The guys are now coming through the pipeline through community colleges and other adult vocational learning where they’ve got some certification in their ability to weld. So they’re not starting out Day 1 as a green guy coming into the shipyard never having struck an arc before. So I think that’s a big difference in what we’re seeing in terms of the way we’re ramping up today compared to maybe decades past,” Graney said of the influx of new welders into the yard specifically. While these new hires may not have worked in a shipyard environment before, they are much better acquainted with the trade of welding than new hires have been in the past.

Boykin said her yard in Virginia was seeing the same in its new hires and was also making use of lease labor welders to supplement the workforce as needed. These welders are typically more experienced and travel from job to job on a contract basis, and they can be used to supplement the full-time workforce as needed if the hiring pipeline hits a snag or if work starts to pile up.

Additionally, she said, Newport News Shipbuilding is investing heavily in training new hires so that their “time to talent” is reduced, or they become proficient faster. The yard is setting up training cells that can work with small groups of welders near their work site to help teach them as they work on the job.

“We’re already starting to see welders who are earlier in their career performing successful challenging welds, where maybe 10 years ago they would have had to have been there 10, 12 years” before mastering those skills, Boykin said.

The yards’ ability to get new workers trained up and on the job quickly will become all the more important as the more complex Virginia Block V design goes into production. Rear Adm. David Goggins, the program executive officer for submarines, said during the roundtable that, whereas the last Block IV sub contractually had a 60-month construction span that the yards couldn’t get down to, the first Block V sub – SSN-802 – will be allowed 70 months as the builders learn to incorporate new acoustic superiority changes into the design. The next two will be the first to incorporate the Virginia Payload Module that adds 28 more Tomahawk missile tubes via an 84-foot mid-body section being added to the design; those boats will be allowed 74 months, as both yards take their first crack at conducting the final assembly of a submarine with the newly added VPM. But beginning with the next sub, SSN-805, the contractual construction span drops down to 72 months, Goggins said.

James Geurts, the assistant secretary of the Navy for research, development and acquisition, told reporters during the roundtable that he thought the Navy and its two sub builders could rise to this challenge if they treat the moment as a generational shift in how to train new workers to build new submarines.

“If you want to come brand new into the workforce, you’re going to be green working on a generation of submarines that we know is there, we know we’re going to go execute,” he said, noting the Navy’s long-term commitment to sub-building.
“And I would say, I think the opportunity is, how do we use this green workforce that’s kind of a generational rebirth in shipbuilding and accelerate their ability to gain the experience and be productive, and then make sure we’ve got the right ways to retain that talent – and that way to retain that talent is creating this long-term strategy, this commitment the Navy and the nation is making to the submarine force. And they’ll be green now, but 15, 20 years from now they’ll be that veteran talent we’re going to lean on going forward.”

Geurts concluded by saying that the scale of the workforce growth challenge doesn’t keep him up at night, but “it’s just going to be, how fast can we get that workforce up to the speed we need them to operate?”