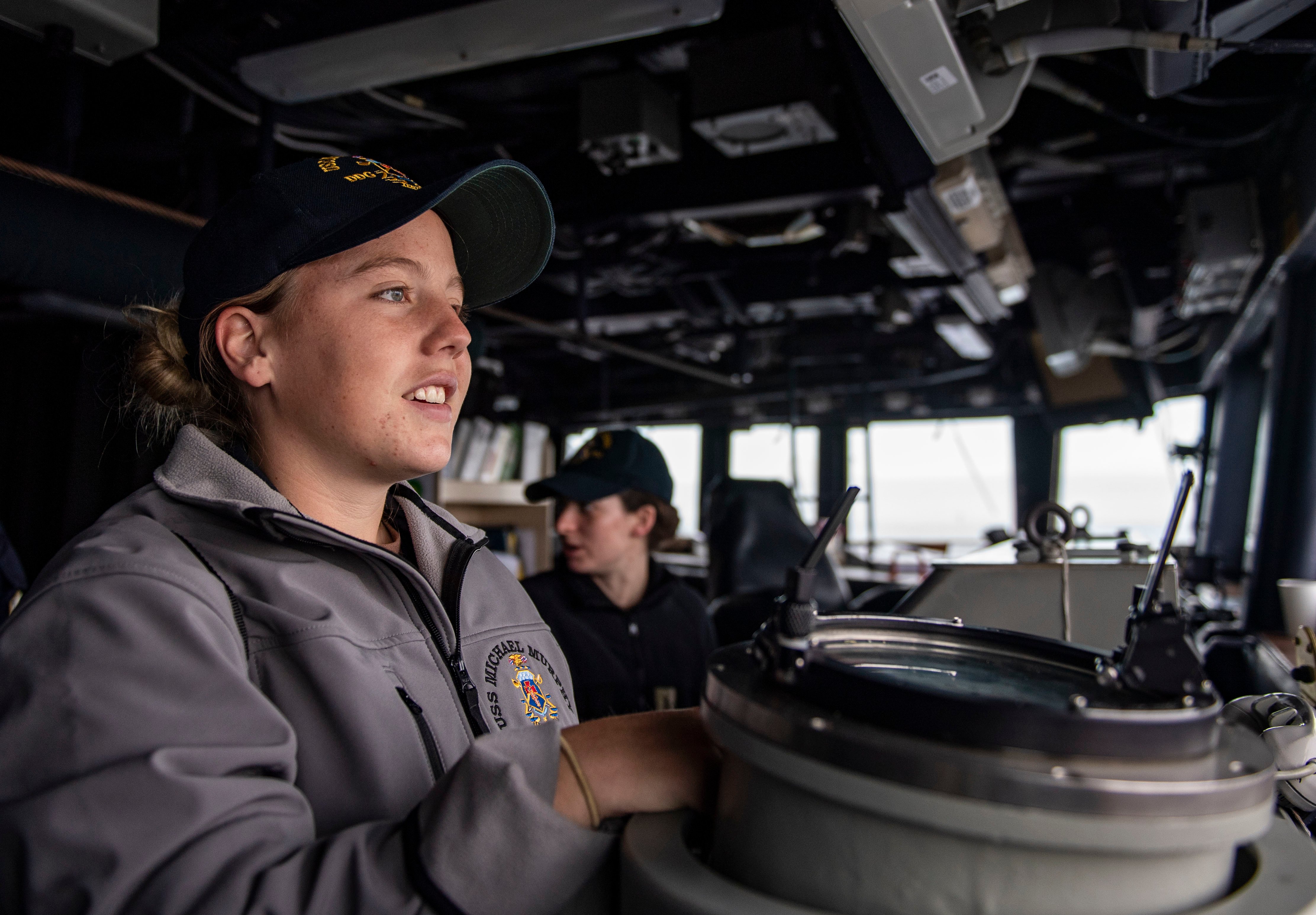 Ens. Autumn Estrada stands watch as the conning officer in the pilothouse of USS Michael Murphy (DDG-112) on July 8, 2019. US Navy Photo

Navy ship-driving skills of its junior officers have seen modest improvements over last the two years since the fatal collisions in the Western Pacific that resulted in the death of 17 sailors, according to testing data obtained by USNI News.

One year after the collisions, the Navy held a snap assessment of a group of 164 surface warfare officers qualified to be officer of the deck. They were given a written exam and a practical “rules of the road” assessment on basic ship driving tenants, and “the results were sobering,” Commander of Naval Surface Forces Vice Adm. Richard Brown wrote last year.
“Of the 164 officers assessed, only 27 Completed No Concerns, 108 Completed Some Concerns and 29 had Significant Concerns. In short, this confirms we have work to do.”

In other words, 84 percent of those OODs surveyed had knowledge gaps for a job the Navy said they were qualified to perform.

“That doesn’t mean they were unsafe; it’s things like, they didn’t use their radar when they should have, and they didn’t talk on the radio correctly,” Brown told USNI News in August.
“But we took all that data, and that’s what we used to develop the [Junior Officer of the Deck (JOOD)] course, because what we want to do is we want to take that normal distribution of performance, and we want to take the entire thing and just move it [to the right].”

Since the JOOD course has been formalized from a pilot program, 320 graduates have shown a modest improvement in competency compared to the 2018 snap assessment in what the Navy says are “challenging applications of rules of the road and ship handling decisions within challenging traffic management scenarios.”

The new tests have shown 66 Completed No Concerns, 244 Completed Some Concerns and 10 had Significant Concerns, according to test data provided to USNI News from Naval Surface Force. That translates into 79 percent of the JOOD graduates with at least some gaps in knowledge — a five percent improvement over the 2018 test, the Navy said.

The JOOD tests are similar to but not exactly the same as the 2018 OOD snap assessment. The 2018 test evaluated Navy qualified OODs operating in the fleet, while the new test is administered to junior officers freshly graduated from a shore-based ship-driving course. It’s unclear what differences there were in the test.

Regardless of the different pool of test-takers, the Navy is holding up the results for the JOOD test as a sign junior officers are better ship drivers as a whole than they were before the collisions and subsequent reform efforts.

The new numbers follow a GAO report that presented concerns in how the surface Navy was implementing a wide swath of surface reforms to improve surface training including expanding the length of training for the Navy’s 8,400 SWOs and building modern training facilities on each coast. 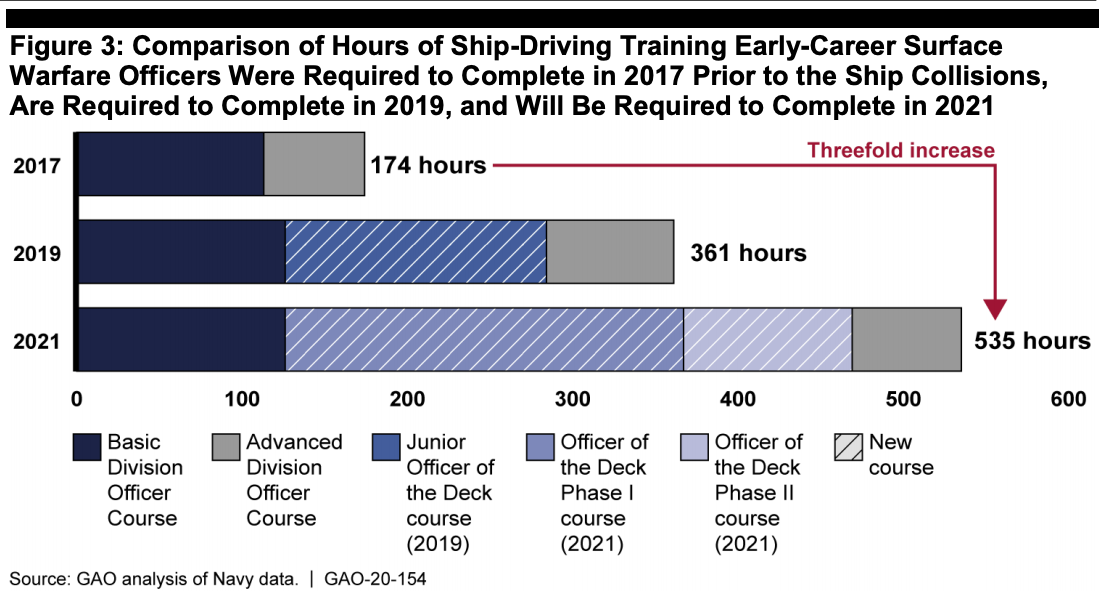 While the report lauded the changes that were part of the wider reforms to the surface force following the collisions of USS Fitzgerald (DDG-62) and USS John McCain (DDG-56), the GAO questioned how the Navy would not only evaluate its progress but also create consistent standards that could be applied across the fleet. The service told the GAO that it could take 16 years or more to see if the changes that the Navy implemented to its training would see any positive effect.

Based on the evaluation, the GAO found four main areas of concern:

“Without addressing these challenges, the Navy cannot assess in the near term if the significant investments made to expand and enhance SWO ship-driving training are effective; further adjustments are necessary; and Navy ships are being operated safely at sea,” the study concluded.

For example, planed officer of the deck snap checks that were instituted following the collisions are set to be phased out in 2021 in favor of a new system of individual competency checks that are part of the new career track for SWOs that was rolled out last year.

While the Navy has been working to shore up major gaps in surface training, investigators found there hadn’t been a marked improvement in the level of skill in the force in a follow-on investigation. 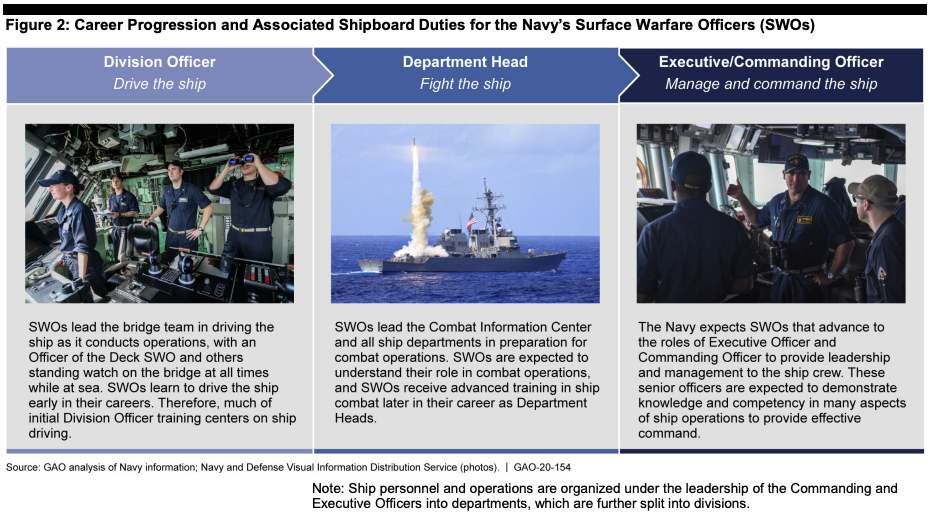 Moving forward, the GAO said the structure of the reforms would be difficult to evaluate due to inconsistent tracking of skill levels across the fleet from the current spot check to the new check, which would result in an apples-to-oranges comparison from the baseline 2018 test.

“Differences in assessment content or difficulty, remediation attempts, and the fact that the new check may have career implications for SWOs as a go/no-go assessment may affect proficiency measurements and pass rates,” read the report.
“Due to these factors, we believe that a comparison between the current Officer of the Deck competency assessment and the planned Officer of the Deck Phase II check or another standard should not be considered as valid means for demonstrating changes in ship-driving proficiency over time. That is, adopting a new standard may affect the Navy’s ability to determine the impact of training on ship-driving proficiency compared with the 2018 baseline results.”

Additionally, a warship’s commander has wide discretion on who can drive the ship based on their own personal judgment with a loose guide provided by the services’ Personnel Qualifications Standard (PQS) for the OOD role. The GAO report says the subjective application of PQS by indivdual commanders makes it difficult to have a consistent standard across the fleet.

“The Navy has not provided Officer of the Deck assessment criteria based on the developed proficiency standards to ship commanding officers, out of deference to their judgment in interpreting an officer’s preparedness to drive their ship,” reads the report.
“Navy officials emphasized the importance of allowing ship commanding officers to make their own determination of an officer’s preparedness to drive a ship, due to their knowledge of the ship’s operating conditions.”

The Navy argued in their response to the report that the current standards were sufficient to guide commander in the process. However, a series of discussion groups with SWOs held by the GAO found an inconsistent application of the OOD standards across the surface fleet.

In addition, the GAO found the service’s own assessment criteria for OOD’s was only used Surface Warfare Officer Schools Command in assessing training curriculum “and had not considered using the standards in the fleet for other purposes,” reads the report.
“The Navy’s 2018 and 2019 Officer of the Deck competency assessments identified significant variance in the ship-driving competency levels of recently qualified Officers of the Deck.”

The GAO also found that the SWO logbook that was instituted last year by the service was inconsistently used throughout the fleet and there was no method to capture the data and apply the lessons in a systemic way across the service. The Navy argued that the GAO had conducted its survey in the early days of the rollout of the logbooks and that their methods have improved.

While the Navy and GAO quibbled with how to implement the recommendations for improvement, investigators noted an improvement in the Navy’s effort overall to improve standards for junior SWOs.

“We were impressed by the Navy’s significant efforts to improve Surface Warfare Officer training, including tripling schoolhouse time and investing nearly half a billion dollars in training centers through 2025,” lead GAO investigator John Pendleton said in a Wednesday statement to USNI News.
“We were also pleased that the Navy concurred with our recommendations, which centered on mechanisms to ensure that these investments pay off over time.”

The following is the complete response to USNI News questions from U.S. Naval Surface Forces.