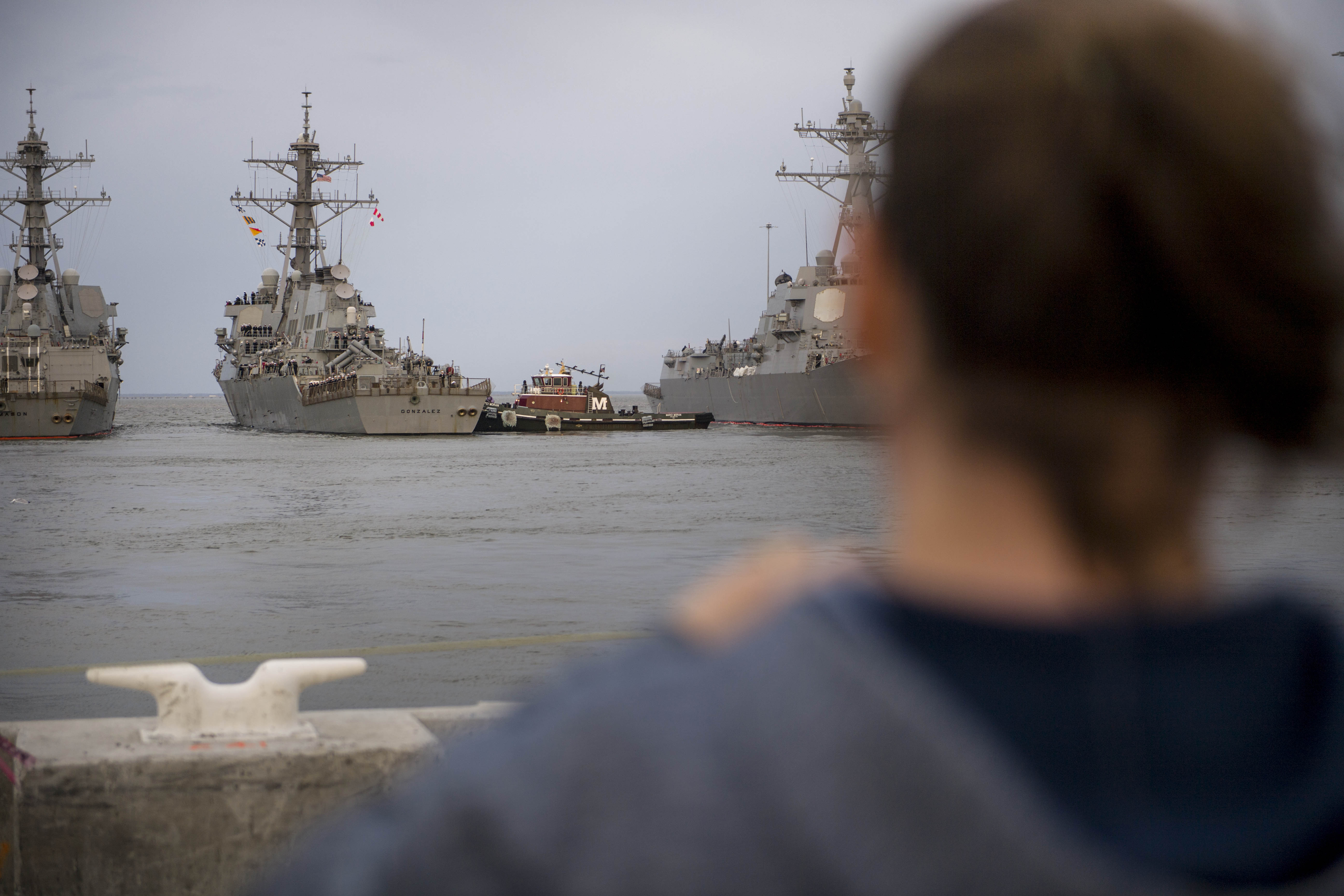 A loved one watches as the guided-missile destroyer USS Gonzalez (DDG 66) departs Naval Station Norfolk on March 15, 2019. US Navy Photo

ARLINGTON, Va. – The Navy is unlikely to field a 355-ship fleet in the near- or even mid-term future if funding doesn’t change dramatically, the department’s top leadership said during a pair of appearances last week.

The 355-ship Navy is a nice target; however, ship readiness is more critical for the service as it plans how the fleet will look in the future, Vice Chief of Naval Operations Adm. Robert Burke said Friday while speaking with reporters at the Military Reporters and Editors conference.

“Will we get to 355-ships?” Burke said. “I think with today’s fiscal situation, where the Navy’s top line is right now, we can keep around 305 to 310 ships whole, properly manned, properly maintained, properly equipped, and properly ready.”

The Department of the Navy requested $205.6 billion for Fiscal Year 2020 and focused spending on fielding new capabilities and canceling some modernization and life-extension efforts. The budget request outlined a path to fielding a 314-ship fleet by 2024, which was a decrease from the FY 2019 budget request’s plan to reach 326 ships by 2023. Congress has not passed an FY 2020 budget.

The target of a 355-ship fleet was announced in 2016, based on a force structure assessment the Navy released at the time. However, Navy leaders have since walked back from saying fielding 355-ship fleet was etched in stone; former Chief of Naval Operations Adm. John Richardson in early 2018 began foot-stomping the idea of a whole Navy, where the size of the fleet was only one of six components that needed to be considered. Congress, on the other hand, codified the 355-ship Navy into law.

A Congressional Budget Office report states Navy leadership started alerting Congress that the 355-ship fleet target was likely to change when a new force structure assessment is completed by the end of this year. However, even though the ship total goal may change, the projected funds for the Navy in the future puts a practical cap on what the Navy can build and sustain, Burke said.

“If our top line does not go up, if it remains where it is now and is projected to remain in the future defense plans, that’s about where we can get to and do it right, in terms of man those ships and maintain them and have all the ordnance for them and generate readiness,” Burke said. “We would need an increased top line.”

Secretary of the Navy Richard V. Spencer, during an appearance at the Brookings Institution last week, also confirmed the future fleet would likely be smaller than the 2016 force structure assessment recommends.

“A 355-ship Navy is an important aspirational goal,” Spencer said. “But more important is ensuring that we have the maximum capability to address every challenge we’re going to be facing.”