Master Chief Petty Officer of the Navy Russell Smith prepares to throw out the ceremonial first pitch at Nationals Park in Washington, D.C. during Nats Navy Day on May 1, 2019. The Washington Nationals dedicate a special game to honor and celebrate each of the five branches of the military. At each of these games, representatives from the branch will participate in the pregame ceremony and the Salute to Service. US Navy photo.

If the Washington Nationals hit a home run or win a game this weekend – the first time Nationals Park will be highlighted on baseball’s biggest stage, in the team’s first-ever World Series appearance – listen closely afterward. You’ll hear a submarine emergency surfacing horn.

In a nod to the history of the ballpark’s location and its neighbor up the road at Washington Navy Yard, the baseball team eight years ago chose to replace its fireworks celebrations with the ringing of a klaxon, the “ahh-OOO-gaah” horn associated with submarines and some vintage cars.

“The safety and permitting that goes into fireworks is onerous: so you have to have people ready to go, and if you don’t have any fireworks that game then you’ve got this live ammunition on top of your ballpark, and that becomes a problem. And so it became something that was just logistically difficult to do,” Senior Vice President for Community Engagement Gregory McCarthy told USNI News of the original way to celebrate a homer.
“But we wanted to do something, and we thought, where are we? Well, we’re right next to the Navy Yard, and we’re on the water, and we have this link with the Navy. So we spoke to the commandant at the time of the naval district and got the horn.”

The Navy’s submarines typically blast the klaxon twice to signify a dive and three times to signify an ascent – making the triplet of horn blasts at each home run all the more uplifting.

The Washington Post at the time reported that “the horn was taken to Nats Park and hooked up to a special mic in the press box, where members of the marketing department can fire away after home runs and wins.”

Neither the baseball team nor the Navy could confirm to USNI News the specifics of what kind of submarine dive horn had been given to the stadium.

“It was a way of connecting to the history here around the ballpark, which is the Navy Yard, with the War of 1812, there was some conflict there. But also, linking ourselves to the service members who are just a couple blocks away,” McCarthy said this week.
“And now, it’s yet another tradition that everyone anticipates and looks forward to.” 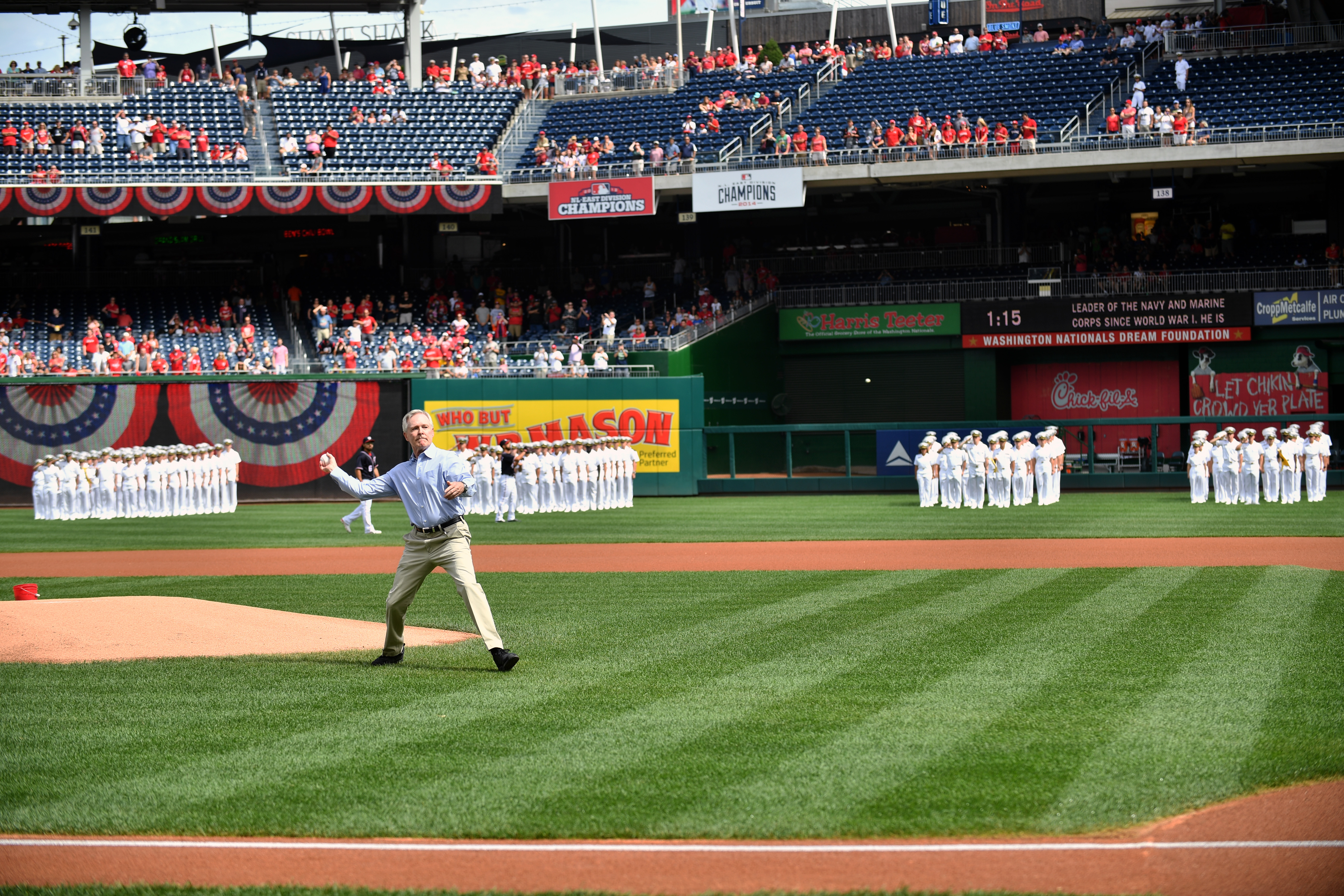 McCarthy said the team routinely works with military installations in the region, including Joint Base Anacostia-Bolling, Naval Air Station Patuxent River, Naval Surface Warfare Center Dahlgren and the U.S. Naval Academy. The team has a summer reading alliance with local bases, sending both books and baseball tickets to on-base libraries in the region to encourage military kids to keep reading during summer break. They have a Leadership Development Program that brings in base leadership and field-grade officers and equivalent-ranked civilians to meet with the baseball team’s executives for team-building exercises and conversations about leadership challenges in the military and business worlds. And the Nats host Navy Day and other opportunities to highlight the services, as well as offering steeply discounted tickets for military personnel.

For the first time this year, the team hosted a Battle of the Bases tournament among intramural softball teams from 13 nearby bases. About 2,200 players were outfitted in Nats gear, and a team of “The President’s Own” U.S. Marine Band members beat out a group of finance personnel from Marine Corps Base Quantico in the championship game at Nats Park.

The team also honors local military members during the third inning of each game, showing on the big screen a row of military personnel, families or veterans in seats behind home plate.

“We’re a young team and we’re still building our traditions, but that has quickly become I think probably the most anticipated and beloved tradition that we have, and people get up – and we don’t ask anybody to do anything; people stand and clap on their own,” McCarthy said.
“I think people are often at a loss for how they can express their admiration and respect and thankfulness to our service members, and the fact that they’re on the screen and waiving their caps, it’s just a special moment for everybody.”

But the events of Sept. 16, 2013, forever changed the relationship between Washington Navy Yard and the Washington Nationals.

Twelve were killed when a shooter entered the Naval Sea Systems Command headquarters building and began shooting. The ballpark served as a hub that day for moving employees off the yard and to a safe spot, reuniting them with family members, and coordinating the announcement of the identities of the victims. The Nats were supposed to host a ballgame that night, which was canceled amid police activity throughout the area. In the following days, the team had survivors and victims’ families participate in pre-game and on-field activities, which McCarthy said were “very emotional times on the field and especially with the military there in their uniforms.” But he said those were “temporal things that were not permanent,” and the team wanted to do something more. The Nats, at the start of the following season, installed a memorial in the center field plaza so stadium visitors “could learn about [the shooting] and honor the victims but also just pause and reflect about the service of the people that were killed and also the power of a community coming together in a time of tragedy and need and supporting each other. And that’s an inspiration we want people to take from that tragedy and apply in their everyday lives.”

“At the end of the day, baseball is a game, yes, but it’s also a social institution that’s supposed to bring people together and create memories that last for people. And a lot of times they’re happy memories, generations of a family coming together to a game; but this was an instance where we needed to step up and help our neighbor in a time of tragedy and anxiety and sadness. The fact that it was a military neighbor, which is such an integral part of our life to start with – it was a no-brainer, and that’s what you do to neighbors, that’s what you do in baseball, so we didn’t have to think twice about anything,” McCarthy, the son of a Marine who grew up on a handful of naval air stations, said.
“That’s something that’s seared in our memory, and I think really helped develop our team in terms of what we thought we could do in the community and what our role was.”