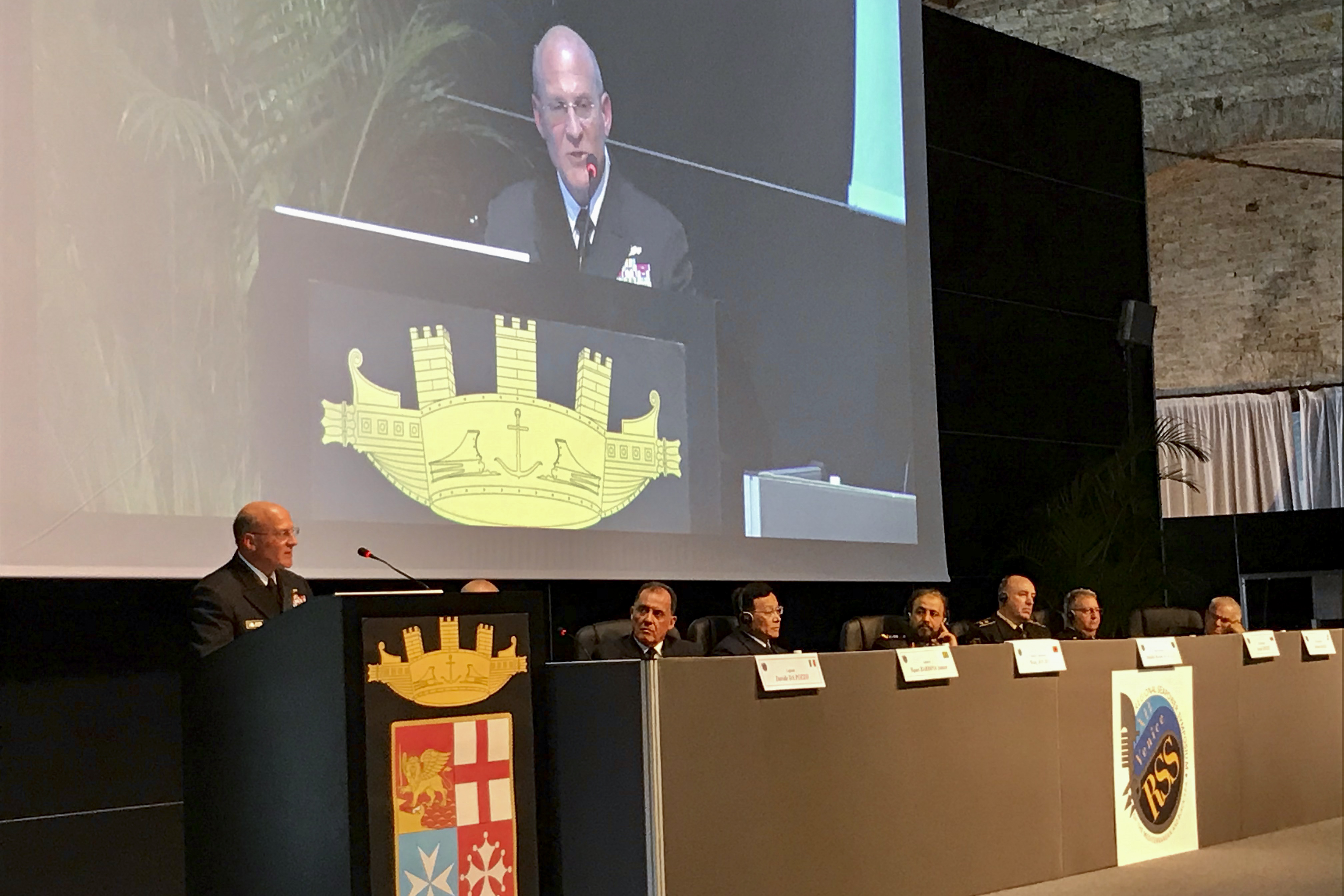 Chief of Naval Operations (CNO) Adm. Mike Gilday delivers remarks at the Regional Seapower Symposium (RSS) in Venice, Italy, on Oct. 17, 2019. RSS’s primary purpose is to foster open and constructive exchange of views and ideas, enhancing a comprehensive approach to many sea-related matters, as well as boosting mutual knowledge and trust among naval partners. US Navy photo.

The new chief of naval operations told global navies today that he wanted to bring his allies along as the U.S. Navy moves into higher-end maritime operations.

Speaking at the 12th Regional Seapower Symposium in Venice, Adm. Mike Gilday told leaders from more than 30 countries that “today, the very nature of our operating environment requires shared common values and a collective approach to maritime security. And that makes steady, enduring Navy-to-Navy relationships more important than ever.”

Noting that his upcoming guidance document would elaborate on this point, he told conference attendees, “I believe that the United States Navy is at a transformational moment, where we are shifting the central operational hub of our naval operations from strike groups and amphibious readiness groups to our fleet-level. We have a long tradition of sailing with many of you, and we look forward to operating with you as we make this shift, experimenting and exercising at the high end of naval operations. By doing so, we will only improve our collective readiness and our responsiveness, pioneer new concepts together, strengthen deterrence, and positively shape the security environment.

“Here in Europe, [Commander of Naval Forces Europe Adm. James] Foggo and [U.S. 6th Fleet Commander Vice Adm. Lisa] Franchetti will continue to build on their fantastic work to date operating, exercising, and experimenting with large naval force elements, as our other fleet commanders will pursue similar efforts in their regions around the world,” he continued.

In one such example, earlier this year amphibious forces in the Baltic Operations (BALTOPS) 2019 exercise rehearsed new high-end tactics that sought to insert an echelon of leadership between the traditional strike group/ready group level and the fleet commander, so as to be able to move niche capabilities around as needed to support operations across the full geography of the theater.

Naval leaders on a few occasions this year have spoken about the need to take a fleet-wide approach to operations at sea, giving a fleet commander a wider range of networked ships, planes, sensors, weapons and more to accomplish his or her goals instead of confining a strike group to the capabilities inherent within the unit.

Gilday foot stomped the role of allies and partners in enforcing international maritime norms and in operating together as a global force.

“While any navy can surge forces, none of us can surge trust. Naval exercises and symposiums like RSS help us build relationships so that we can talk to each other in good times as well as difficult ones,” he said.
“Adm. [Mike] Mullen, a former U.S. Navy chief of naval operations, talked about a 1,000-ship Navy. I say, why not a 10,000-ship navy? With like-minded partners, there’s a lot we can do together to keep the maritime commons free and open.”

Later in the speech, he returned to the importance of working together with like-minded partners, noting that “being ready to defend international norms is important to the United States, and I know it is important to all of you. We are defending international norms to foster global economic prosperity; we do it to protect the right to navigate the world’s international waters; we do it to ensure smaller nations are not bullied by others, so that they can access their fair share of resources; we do it to help others recover from disasters; and we do it to ensure the maritime domain is a more stable and secure place for all of us and for our children. And that is why we should all continue to fly, sail and operate wherever international law allows.” 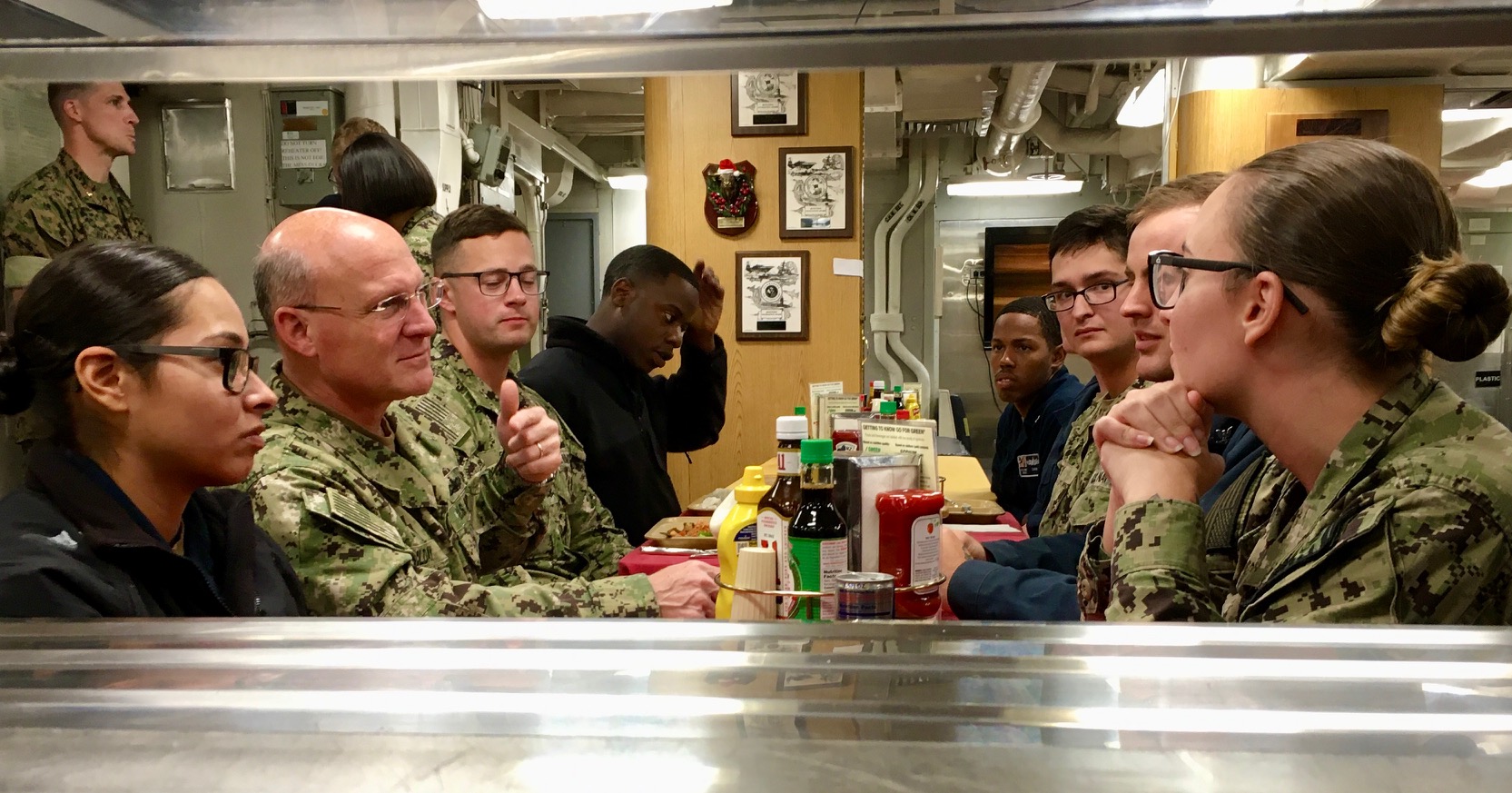 Chief of Naval Operations (CNO) Adm. Mike Gilday meets with Sailors assigned to the Arleigh Burke-class guided-missile destroyer USS Carney (DDG 64) during his visit to Rota, Spain, on Oct. 15, 2019. Gilday is conducting fleet engagements in Rota, Spain and Naples, Italy, to see first-hand the work Sailors are doing in the U.S. 6th Fleet area of operations. US Navy photo.

Also during the speech, Gilday addressed the changing technological environment and how that affects Navy operations. He called out tactical cloud computing, artificial intelligence, and machine learning as drivers of change for the U.S. Navy and said that those advances, along with innovation from the sailors that operate the tech, will “generate unprecedented naval power.”

“Before assuming this position, I served as the commander of the U.S. 10th Fleet, our Navy’s cyber fleet, with responsibility for worldwide cyber operations. That experience helped me to better understand the connections between the digital world and the maritime and the challenges related to the interconnectedness of both,” Gilday said.
“So I believe that we, each from our respective countries, must strive to think differently and to educate our sailors about this digital realm as we rely on it more and more for security and stability. The U.S. Navy will bridge the cyber divide to overcome new operational challenges in our own fleets.”