The future USNS Miguel Keith (ESB 5) departs General Dynamics National Steel and Shipbuilding Co. shipyard in San Diego, Calif. During the weeklong acceptance trials, the Navy’s Board of Inspection and Survey conducted comprehensive tests to demonstrate and evaluate the performance of all of the ship’s major systems. NASSCO photo.

The Navy wrapped up sea trials on its newest Expeditionary Sea Base (ESB), the future Miguel Keith (ESB-5), after a 2018 shipyard accident and damage to the hull.

Miguel Keith, the fifth expeditionary ship built by General Dynamics NASSCO and the third in the ESB configuration, was under construction on July 11, 2018, when the yard’s graving dock flooded. The ship was knocked off its blocks and took on water. With many of the shipbuilders temporarily laid off while NASSCO assessed the damage, the Navy later predicted that the ship’s delivery would be delayed at least six months from the previous expected delivery date of May 2019.

Last week – five months after the originally planned delivery date – Miguel Keith conducted sea trials off the coast of Southern California, with the Navy’s Board of Inspection and Survey conducting “comprehensive tests to demonstrate and evaluate the performance of all of the ship’s major systems,” according to a Navy news release.

“Our ESBs are bringing tremendous operational capability to our combatant commanders. These ships are supporting a wide variety of mission sets in the 5th and 6th Fleet and more recently have demonstrated their ability to integrate mine countermeasure mission packages,” Capt. Scot Searles, Strategic Sealift and Theater Sealift program manager within the Program Executive Office for Ships, said in the release.
“These sea trials demonstrated the high quality of this ship and its readiness to join the fight.”

Miguel Keith will deliver in the coming months, with the Navy noting in its release that delivery will take place in early Fiscal Year 2020, which began Oct. 1. 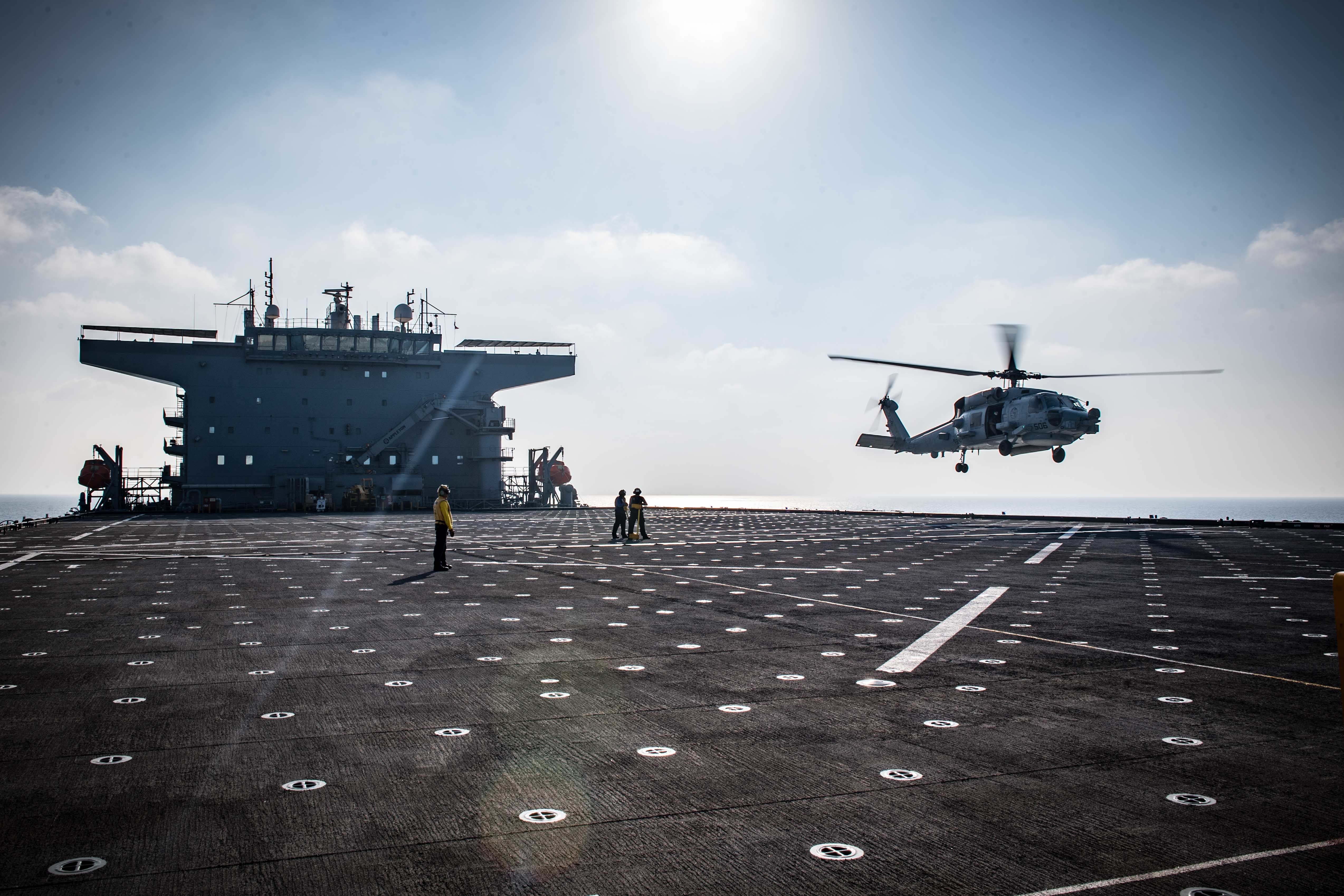 An MH-60R Sea Hawk helicopter, assigned to the “Vipers” of Helicopter Maritime Strike Squadron (HSM) 48, lands on the flight deck of the expeditionary mobile base platform ship USS Lewis B. Puller (ESB 3), Oct. 20, 2018. Puller and the Arleigh Burke-class guided-missile destroyer USS Jason Dunham (DDG 109) are deployed to the U.S. 5th Fleet area of operations in support of naval operations to ensure maritime stability and security in the Central Region. US Navy photo.

NASSCO took its Alaska-class oil tanker design and scooped out the tank portion of it, essentially leaving a wide-open space for the Navy to leverage in multiple ways. The first two ships of the class, Expeditionary Transfer Docks (ESDs), can ballast down and submerge the empty middle of the hull, allowing surface connectors such as the landing craft air cushion (LCAC) to come aboard and bring goods from larger supply ships at sea onto the shore or to amphibious ships. The remaining ships in the class, the ESBs, do not ballast down but rather have a large mission bay where unmanned surface and undersea vehicles can be launched into the water, and a flight deck for helicopters, tiltrotor aircraft and drones.

According to the Navy news release, ESBs include a four-spot flight deck and hangar and a mission deck below. They are designed around four core capabilities: aviation facilities, berthing, equipment staging support, and command and control assets 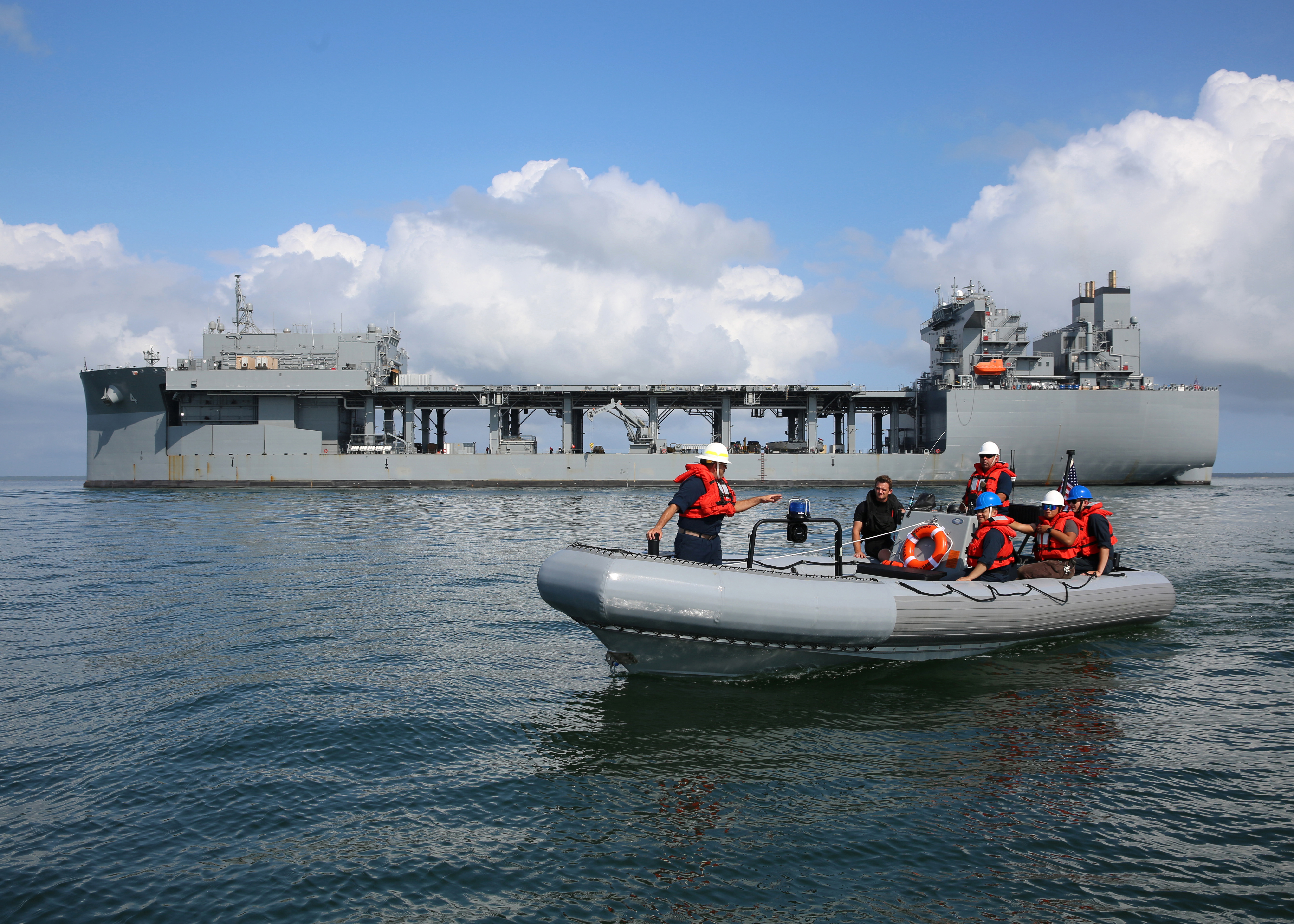 Capt. David Gray, the military detachment officer in charge of the Military Sealift Command expeditionary sea base USNS Hershel ‘Woody’ Williams (ESB 4), gives guidance and direction to Sailors while leading a training evolution aboard one of the ship’s ridged-hull inflatable boats while the ship was at anchor in the Chesapeake Bay, Sept. 15, 2019. Hershel ‘Woody’ Williams is conducting mine countermeasures equipment testing in the Chesapeake Bay. US Navy photo.

Though the ESBs were originally intended to support mine countermeasures and special operations forces missions, the Marine Corps is increasingly interested in the platform and using USS Lewis B. “Chesty” Puller (ESB-3) forward-deployed to the Middle East.

The second ESB, USNS Hershel “Woody” Williams (T-ESB-4), is likely to serve in the Mediterranean.

NASSCO is under contract for detail design and construction of ESBs 6 and 7, with an option for ESB-8.