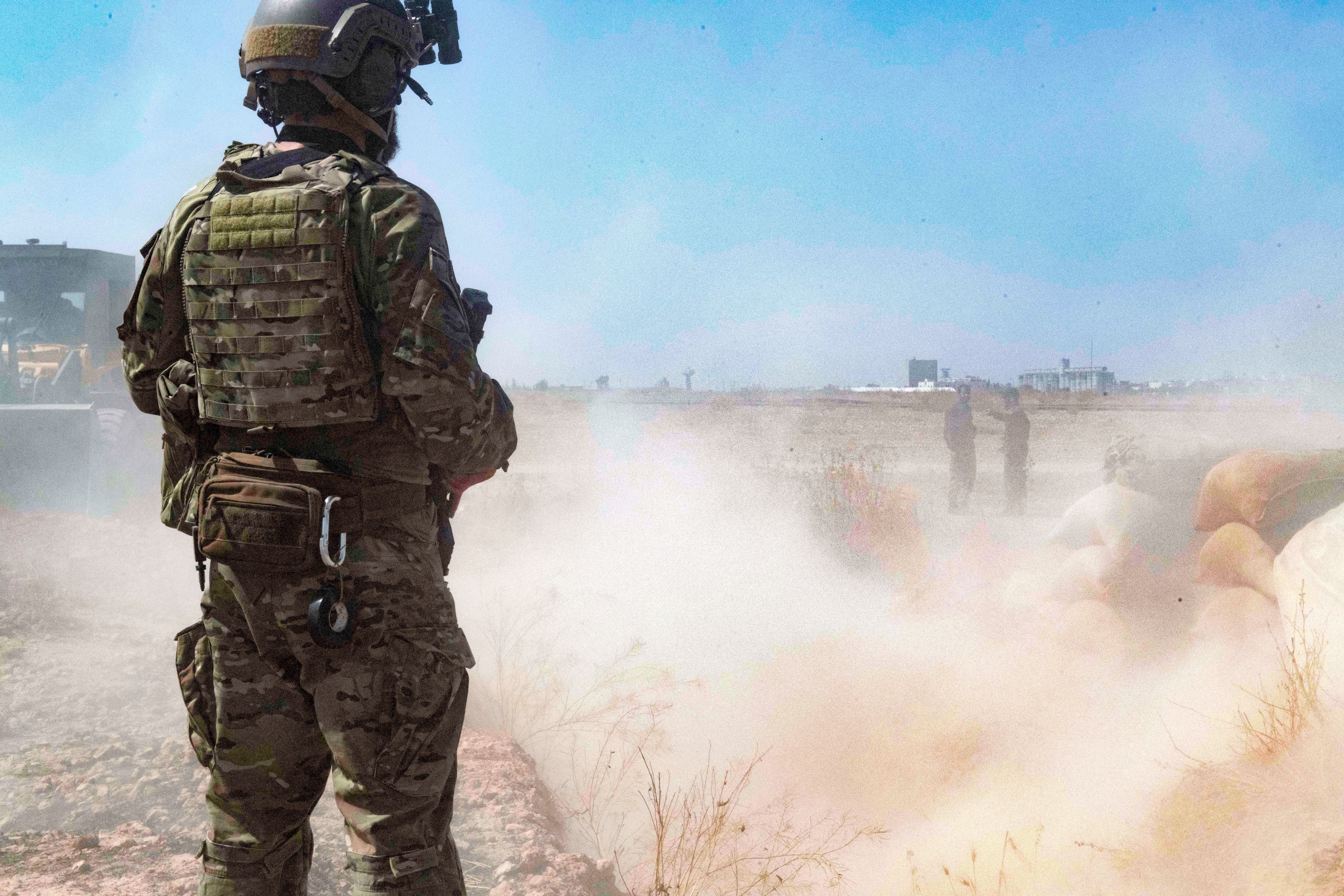 A U.S. service member oversees members of the Syrian Democratic Forces as they demolish a YPG fortification in northeast Syria, Sept. 21, 2019. US Army Photo

A bipartisan group of senators introduced a bill Wednesday that would impose economic sanctions on Ankara for its military incursion into Syria as Turkey seeks to create a buffer against the Syrian Defense Forces, a key American ally in the fight against the Islamic State.

The bill proposed by Sens. Lindsey Graham (R-S.C.) and Chris Van Hollen (D-Md.) specifically singles out Turkish leaders – from the president down to a host of ministers, including defense and foreign affairs – for penalties; cuts off assistance and supplies, including ammunition, to its land, sea and air services despite Ankara being a member of NATO; and slaps sanctions on anyone from outside Turkey doing business with its energy sector.

Graham has been quoted as saying he expects “our bill will have bipartisan, bicameral support.”

It also asks for even more penalties to be put into place for Turkey’s earlier decision to buy the Russian S400 air defense system. The United States already has pushed Ankara out of the F-35 manufacturing and purchasing program.

The Russian system is “incompatible” with existing NATO systems, Pentagon officials have said, and the fear was that Moscow would use data and intelligence gained from Turkey on the development and operations of the F-35 to deter its effectiveness in combat.

Events have moved swiftly in northeast Syria since President Donald Trump announced Sunday he was pulling American forces back. How many of the estimated 1,000 service members serving with the SDF are affected by the decision is unclear.

But what is clear is the decision – the second such pullback Trump has announced – again surprised Congress, other members of the administration and the former combatant commander in the Middle East and raised new questions of how trustworthy the United States is as a military partner.

Retired Army Gen. Joseph Votel said the quick decision to pull U.S. troops out of Syria and let Turkish forces in was an “example of letting down our partners” in the fight against the Islamic State.

Speaking at the Atlantic Council in Washington, D.C., earlier this week, Votel, who left his position about eight months ago, said his view of the move was “was one of disappointment.” He called the American and coalition support of the Kurdish-Arab Syria Democratic Forces “a model of how we should do [operations with a small U.S. footprint and local forces carrying the combat burden] to protect our interests.

He noted the SDF suffered 11,000 casualties in the fighting to wrest control of large portions of Iraq and Syria from the Islamic State.

Votel also warned that pullout may be “ceding our advances” in the fight against the Islamic State, with the implication that neither the Russians, who are supporting the regime of Bashar al-Assad militarily and economically, or the Turks, who are moving into the area ,will be interested in keeping the pressure on the extremists. 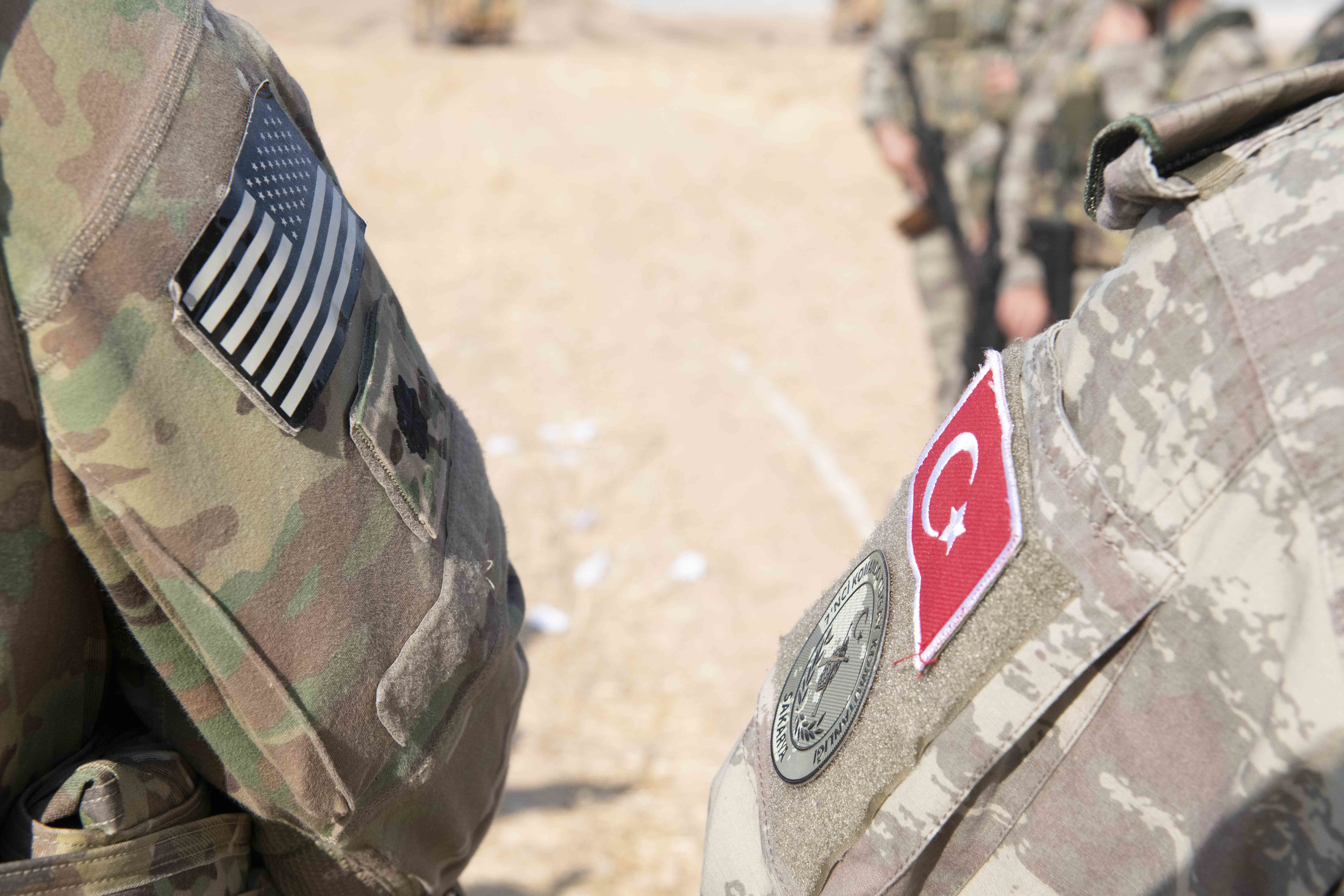 Instead, the Turkish movement of ground forces and accompanying airstrikes puts the Kurds particularly at risk in northeast Syria. For decades, Turkey has labeled the Kurds as terrorists interested in creating their own nation out of land in Syria, Iraq and Turkey itself where they make up the majority of the population.

Turkish President Recep Tayyip Erdogan has repeated those charges, and the United States government has also labeled a Kurdish organization there a terrorist group. Erdogan has said that in moving his forces into Syria he is offering the millions of refugees in Turkey a chance to move back into a “safe zone” in their homeland.

The White Housed in a statement Wednesday from President Trump that said, in part, “the United States does not endorse this attack [on the SDF] and has made it clear to Turkey that this operation is a bad idea.” Later in remarks to the press, he said the United States is talking to the Turks and the Syrian Defense Forces in an attempt to end the fighting, reported ABC News.

At the council forum, Votel described the Syrian Democratic Forces as “a capable and trustworthy partner” in the struggle that ended the Islamic State’s control of large portions of Iraq and Syria. The SDF “protected us every day.”

Noting that he had “rewritten my remarks twice in the last 24 hours” after Trump’s announcement of the American withdrawal, Votel said he believes that it “will be more difficult to involve partners in the future.” He added the importance of partnerships is that they can mitigate risk to U.S. forces in the field.

This was not the first time Votel and others have been stunned by a sudden announcement of an American pullout from Syria. That announcement in December led to the resignation of retired Marine Gen. James Mattis as secretary of defense.

While still serving as the senior officer at Central Command earlier this year, Votel told Congress in February he had “not been consulted” by Trump about the December announcement. At the time he refused to speculate to the Senate Armed Services Committee about what the next steps might be from the White House concerning Syria.

The Senate’s reaction then was an overwhelming vote against a quick withdrawal.

Congress is in recess now.

Following this announcement, Sen. Graham said in a tweet earlier this week, “By abandoning the Kurds we have sent the most dangerous signal possible – America is an unreliable ally and it’s just a matter of time before China, Russia, Iran, and North Korea act out in dangerous ways.”

The ranking member of the Senate Armed Services Committee, Sen. Jack Reed, (D-R.I.), said in a statement “President Trump needs to explain this hasty retreat in more than a tweet. He should address the American people and layout a serious strategy.

“Congress needs to swiftly hold hearings with military, diplomatic, and intelligence officials to understand how this decision was made and the consequences for Syria, the region, and our ability to work with partners in the future. It appears that President Trump once again disregarded the advice of U.S. military, intelligence, and diplomatic experts and did not appropriately consult with our international allies and partners,” Reed continued.

The use of local forces and coalition partners has been a technique used often in the Middle East since Operations Desert Shield/Storm nearly 30 years ago. Votel noted in his remarks that the latest National Defense Strategy stresses “the importance of partnerships,” a point Mattis made in his resignation letter.

Votel said that, in his opinion, in the current struggle with the Islamic State and extremist groups across the Middle East, progress toward stability has “been steady albeit slow.”

He stressed in his address that the region remains important to the United States and its allies for a number of reasons, including not allowing it to again become a platform for attacks on the homeland and also to ensure that it does not become a hotbed of weapons proliferation.