The Navy has exceeded the Defense Department’s requirement of having 80 percent of operational Super Hornets and Growlers mission capable and has met the stretch goal it set for itself, the service announced on Wednesday.

With rates hovering in the 40- and 50-percent range, then-Defense Secretary James Mattis one year ago ordered all the services to focus their time and money on improving readiness.

“We must focus on meeting our most critical priorities first. These include achieving a minimum of 80 percent mission capability rates for our FY 2019 Navy and Air Force F-35, F-22, F-16 and F-18 inventories — assets that form the backbone of our tactical airpower — and reducing these platforms operating and maintenance costs every year, starting in FY 2019,” he wrote in a Sept. 17, 2018, memo.

Since then, the Navy’s current F-18 force – the F/A-18E/F Super Hornet and EA-18G Growler – have steadily achieved higher mission capable rates. The force has neared or temporarily hit the 80-percent mark a few times in recent months, sources have told USNI News throughout the year. In recent weeks the service has consistently sustained those levels – which equates to about 320 Super Hornets, a number calculated based on the Primary Mission Aircraft Inventory, or those planes assigned to deployable units that would go to combat if called upon, and does not include aircraft that perform training, testing and other missions.

Most recently, the Navy has additionally reached the even tougher target it internally set for itself: 341 ready Super Hornets and 93 ready Growlers, a figure that represents how many jets Naval Aviation would want to surge forward if called upon to fight and win.

“You will see that number up and down from 341. Our primary purpose, now that we got to the 80 percent and 341, is now we’ve got to sustain it,” he said.
“We’ve institutionalized a lot of processes that we’re doing differently than we were before, and now we’re transitioning to how we sustain it. That’s across the board, from how we look at supply, how we work with [Fleet Readiness Centers], how does [organizational] level do their day-to-day functions. So we have some ideas of lessons learned of how we got here and how we need to sustain it.” 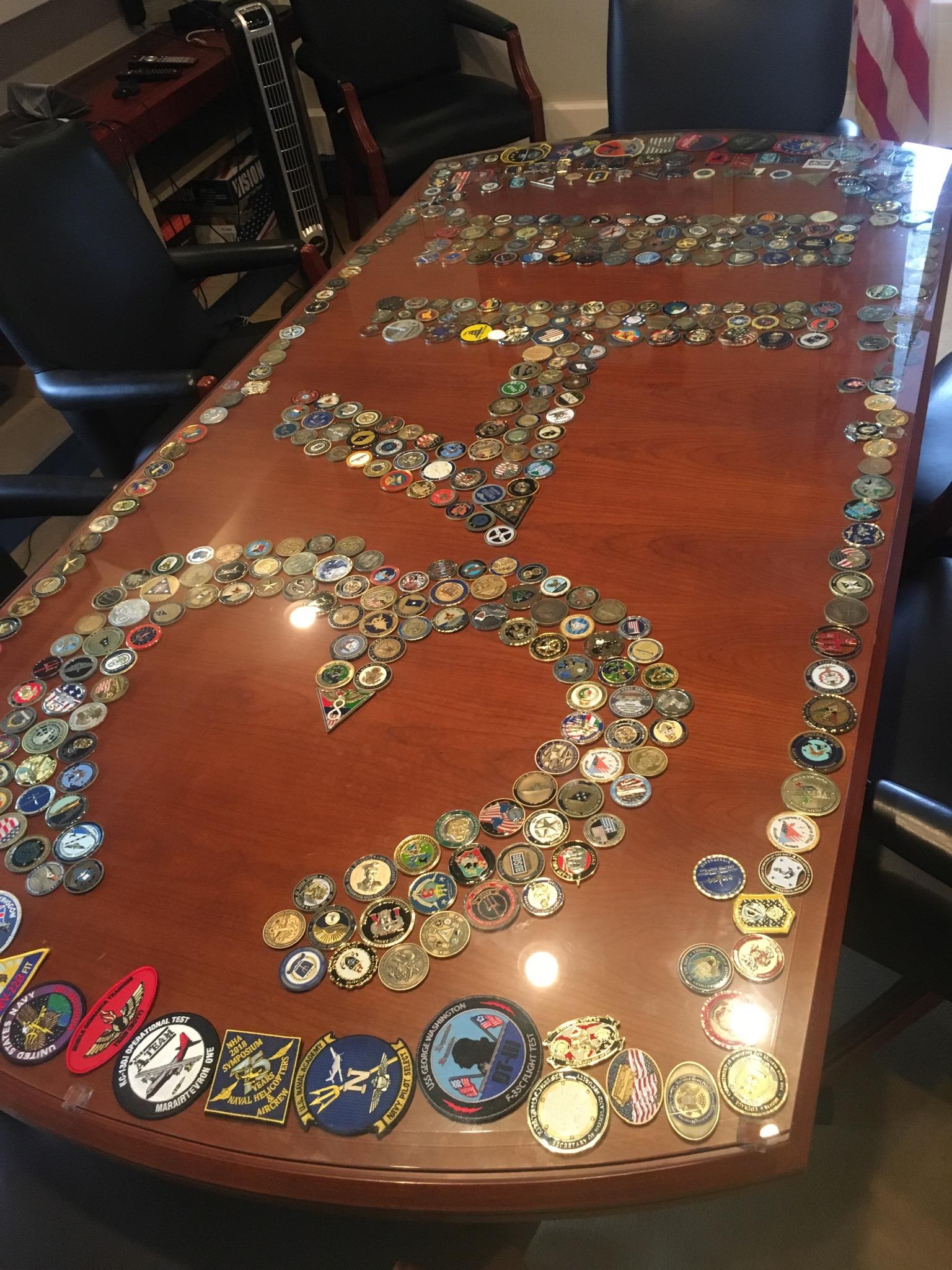 Commander of Naval Air Forces Vice Adm. DeWolfe Miller arranged his coin collection to spell out “341” on his desk in his office at Naval Air Station North Island, as a daily reminder of the readiness goal he and his team are working to reach and sustain. US Navy photo.

Gahagan said some of the success had to do with a concerted effort by the Pentagon and Congress to focus on aviation readiness enablers – spare parts, sufficient engineering support, funding for depots – over the past several budget cycles, and the fruits of those efforts are coming to bear now.

However, he said that much of the success comes from applying best practices from industry and from a new unified focus on up jets as an end goal, rather than the engineering community fighting for resources with the supply community, each hoping to achieve their own internal metrics.

The focus for the entire Naval Aviation Enterprise now is “the aircraft themselves and what was actually keeping those aircraft from not being in an MC (mission capable) status,” Gahagan said.

He noted that each community had its own reforms – reducing scheduled maintenance times at the depots, ensuring the supply chain can deliver parts to the fleet faster – but one of the biggest drivers of change was a Maintenance Operational Center.

The MOC was centralized at Naval Air Force Atlantic (CNAL) headquarters in Norfolk and included representatives from supply, engineering, Fleet Readiness Centers and industry, all working together to make decisions about what individual jets were facing challenges and which could be fixed and returned to MC status most easily.

“That has proven very effective for decision-making, sense of urgency,” Gahagan said.

He also pointed to an effort in earlier this year to better align each squadron with the correct number of aircraft. Some squadrons had more than their allotment, or primary aircraft authorization, and the excess planes were often ones that had been not mission capable for extended amounts of times.

Gahagan said this effort was beneficial for getting more aircraft up as well as providing better training for maintenance sailors.

Going forward, a serious effort will continue on maintaining the readiness levels the naval aviation community has achieved.

“Now we need to sustain it. Now we have an equally challenging goal of sustaining these efforts. A lot of great efforts out there get to their goal and then regress back to the mean; we are definitely not going to do that. We’re sustaining it across the board,” he said.

Though levels fluctuate from day to day – the smaller E-2D community might go up or down a couple jets based on how many are flying, and the larger Super Hornet fleet might fluctuate by 15 or 20 jets – he said the Navy will have to figure out what the lower control limit is, setting up a trip wire in case the service dips below that.

In a Navy statement, Commander of Naval Air Forces (CNAF) Vice Adm. DeWolfe Miller also foot stomped that the Navy wasn’t finished with its goal now that it had reached 80 percent and 341.

“To be clear, there is no finish line to the [Naval Sustainment System-Aviation] effort,” the Air Boss said. “We don’t get to choose when we are called to fight. Sustainment is the key. Continuously improving the reforms implemented by our military, civilian and industry teams will be critical in maintaining our advantage in this age of great power competition.”

Gahagan too praised the Navy-industry team for making the progress they’ve made so far.

“The buy-in for this effort – through the great work from CNAF, CNAL, the narrative all the way down to the deckplate and the squadrons to say why this is important and to get buy-in – has been hugely beneficial,” he said.
“And the workforce did this, the sailors on the flight line did it, in the squadrons, across the board. But that narrative across a whole bunch of agencies, the supply piece, the FRC piece, the engineering piece, all disparate organizations under the NAE, all came together – and the workforce buying into it was really the key that got us to 341.”