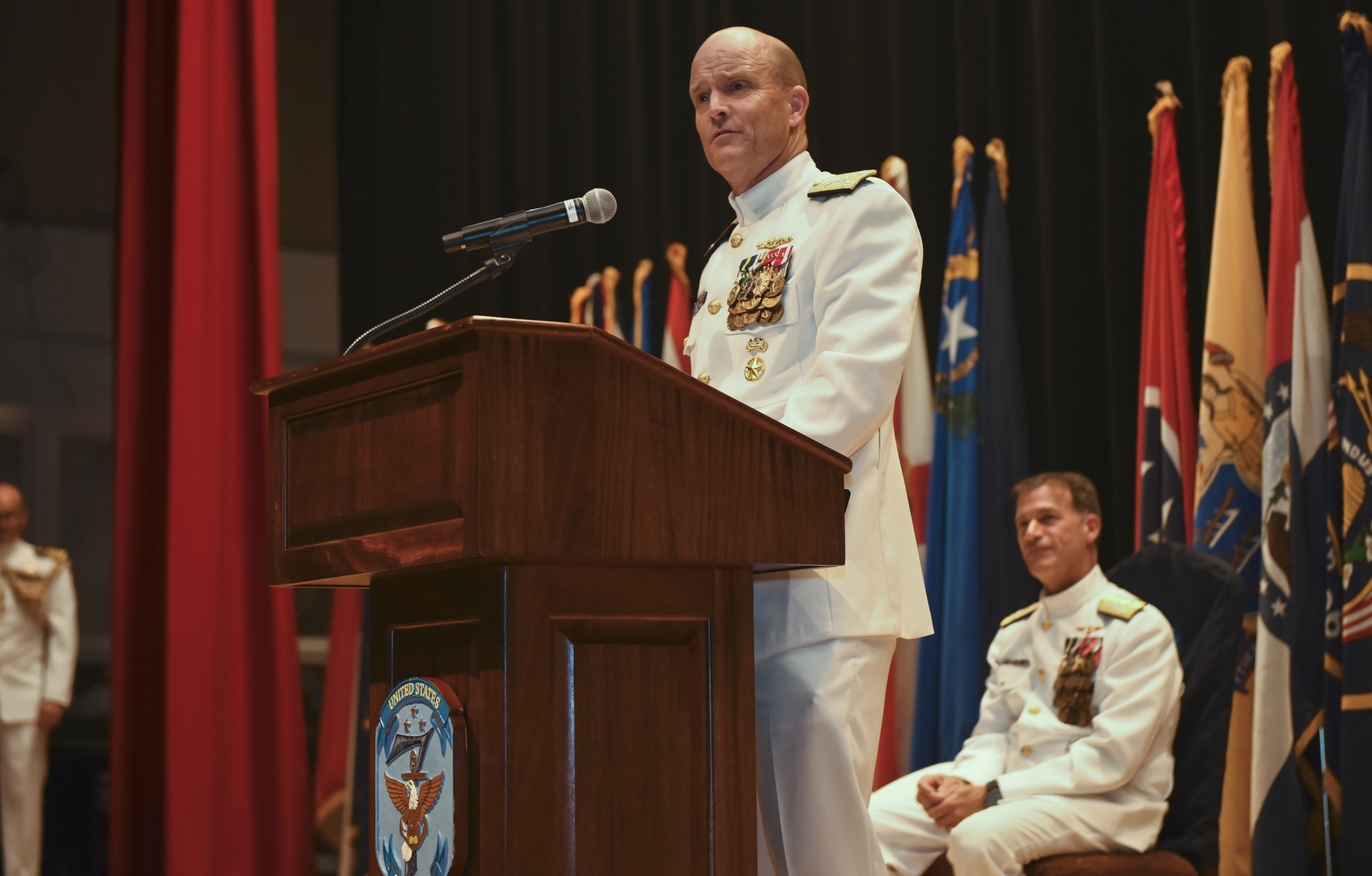 Merz, formerly the deputy chief of naval operations for warfare systems (OPNAV N9), relieved Vice Adm. Phil Sawyer. Sawyer had led 7th Fleet since shortly after 17 sailors died in a pair of fatal collisions in the Western Pacific in 2017.

In his remarks, Merz promised that 7th fleet would be, “the most professional force, the most effective force and also a compassionate force.”

U.S. 7th Fleet is the center of the Navy’s forward-deployed forces in Japan centered around the Ronald Reagan Carrier Strike Group, homeported in Yokosuka.

Sawyer highlighted increased cooperation between 7th Fleet, Australia, Japan and South Korea in his speech, according to a Navy statement.

“Collectively, we designed and executed a comprehensive, first-ever high-end tactical exercise we call Pacific Vanguard,” Sawyer said in a statement. “Hopefully it, and more importantly the fleet commander’s roundtable that we established, are models for our four navies going forward.”

As the operational commander of U.S. naval forces in the Western Pacific, Sawyer was responsible for instituting a wide swath of reforms to how the surface forces in the region operated after the USS Fitzgerald (DDG-62) and USS John McCain (DDG-56) collisions.

“2018 was a rebuilding year and we made many changes,” Sawyer said, according to Stars and Stripes. “It was really hard work, but we entered 2019 fully prepared.”

Sawyer is now heading to Washington to assume the role of deputy chief of naval operations for Operations, Plans, and Strategy (OPNAV N3/N5) on Chief of Naval Operations Adm. Michael Gilday’s staff.

“There is no question 7th Fleet is in a better place today than it was when you started,” U.S. Pacific Fleet commander Adm. John Aquilino said in his remarks.

Merz is a career submariner and a 1986 graduate of the U.S. Naval Academy.

The Thursday announcement was the first official public acknowledgment of Merz’s position as the leader of 7th Fleet. Earlier this year the Navy instituted a new policy of not informing the public of flag officer assignments.

While the position requires Senate confirmation, the Navy would not acknowledge Merz’s new position when asked several times by USNI News this year.

During his farewell speech, Sawyer thanked the 7th Fleet team and its many friends, partners and allies in the region. “Together we accomplished quite a lot,” Sawyer said.

Like Sawyer, Merz has spent most of his career on submarines as an engineer officer. He takes the helm as Commander, 7th Fleet after a stint at the Pentagon as the deputy chief of naval operations for Warfare Systems (OPNAV N9). Sawyer’s follow-on assignment will be as deputy chief of naval operations for Operations, Plans, and Strategy (OPNAV N3/N5) in the Pentagon.

In his speech, Sawyer emphasized his three pillars of command philosophy: partnerships, preparedness, and people. In particular, he highlighted the close partnerships he developed with allied fleet commanders from Australia, Japan and South Korea as critical to handling the multitude of challenges 7th Fleet faces in the Indo-Pacific region, from natural disasters to a rogue and unpredictable North Korea, to revisionist powers trying to reshape the region in their national interests.

“Collectively, we designed and executed a comprehensive, first ever high-end tactical exercise we call Pacific Vanguard,” Sawyer said. “Hopefully it, and more importantly the fleet commanders roundtable that we established, are models for our four navies going forward.”

Adm. John Aquilino, commander of U.S. Pacific Fleet, praised Sawyer’s success in preparedness, noting how he was able to revitalize intermediate advanced training, which he said has generated readiness in the fleet that had been lagging, and singled out his efforts to cultivate important relationships throughout the region.

Summing up Sawyer’s tour, Aquilino said the true test of a naval tour is the condition of the organization at the end of it.

“There is no question Seventh Fleet is in a better place today than it was when you started,” Aquilino said.

For his part, Merz said he was eager to build on the work of his successor and continue to expand the effectiveness of 7th Fleet and maintain peace and stability in the region.

“My longstanding motto is to play hard,” said Merz. “It’s not fancy, it simply means to do what you can with what you have every day to be the most professional force, the most effective force, and also a compassionate force.”