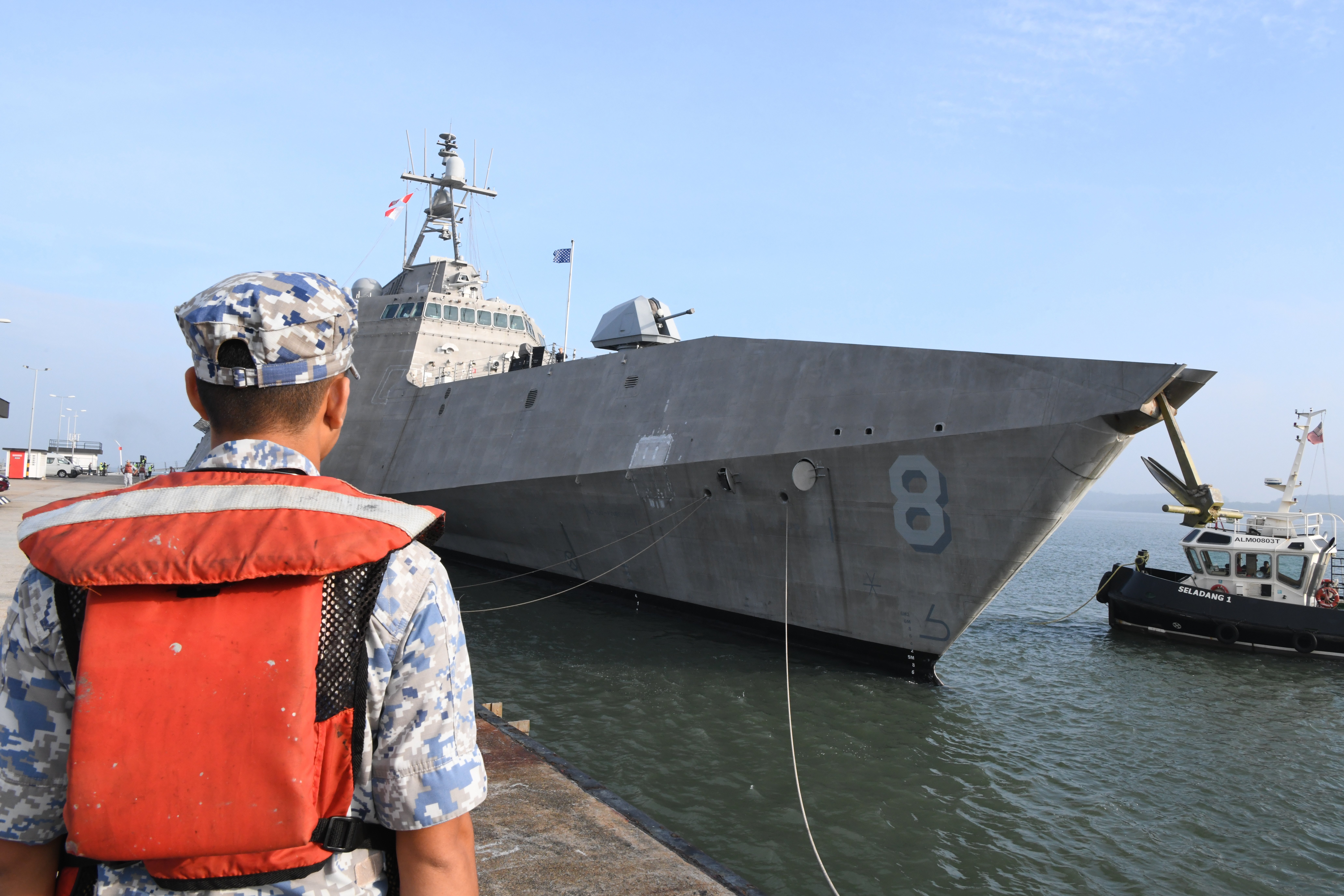 With a shallow draft and a forward-deployed maintenance team, USS Montgomery (LCS-8) is demonstrating how Littoral Combat Ships can extend the Navy’s reach in the Western Pacific, the ship’s commander said on Wednesday.

Independence-variant Montgomery deployed to the region in May and since arriving in the Western Pacific the ship has toured the region showcasing its capabilities, Cmdr. Edward Rosso told reporters. The ship had just returned to Singapore after completing the recent Association of Southeast Asian Nations (ASEAN)-U.S. Exercise called AUMX.

“We’re fortunate enough to arrive and to be able to participate in some historic events. The U.S. Navy, along with our partners and allies, has long known the importance and value of working together and from my perspective that is exactly what Montgomery has done during this deployment,” Russo said. “We began our time in theater with a historic port visit to Davao City in the Philippines. It’s a beautiful port that was perfectly suited to receive our shallow hull Littoral Combat Ship. This was the first visit by a U.S. warship to that location in recent memory.”

Independence LCS, such as Montgomery, has a draft of 15.1-feet, according to the Navy. In comparison, an Arleigh Burke guided-missile destroyer has a draft of 31-feet.

“One of the great things about my ship is the draft. We don’t’ draft a lot so we can go to other ports where the depth is not so deep,” Rosso said. “So, when we went to participate in (Maritime Training Activity) MTA Malaysia, we went to Lumut. That was a very tight port, that other ships bigger ships would not be able to go to.”

The Navy plans to use the LCS in across the world notably the Western Pacific and the Persian Gulf, to the extent the number of LCSs operating at any moment would rival the number of destroyers. The Navy has tweaked the plan, reworking crews organization and the mission packages installed on the LCS. For instance, USS Gabrielle Giffords (LCS-10) which deployed to the region last week, was first back-fit to carry the Naval Strike Missile.

The goal was always to push these ships into areas other platforms could not easily access – precisely what Rosso said his crew accomplished on Montgomery’s first deployment.

“Our unique capabilities allow us to work with a broad range of regional navies and visit certain ports the larger ships with deeper drafts aren’t able to do,” Rosso said. 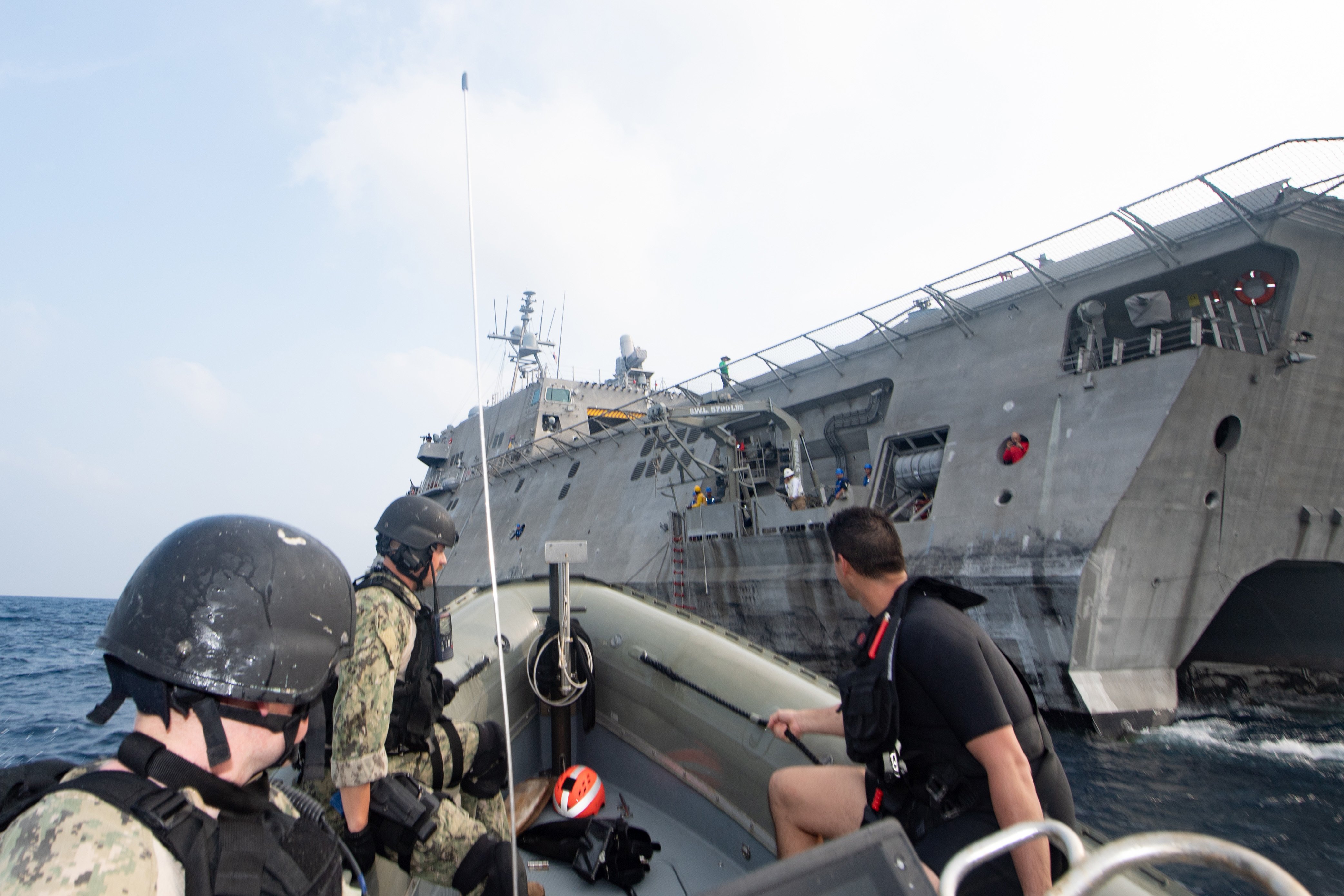 Montgomery’s design is part of the reason Rosso said his ship was able to visit areas not regularly visited by the Navy. A forward-deployed support and maintenance team allows an LCS such as Montgomery to operate away from the U.S successfully.

“We have the maintenance support team here. They built an actual support site here where we have people on-site in Singapore to support and work the maintenance here for us. So we have some folks who are actually assigned and live out here to work on the ship when the ship pulls into Singapore for maintenance.

The ability to perform extensive repairs and complex maintenance on a deployed LCS fleet has been a concern for the Navy since the first LCSs deployed to the Western Pacific. In January 2016, USS Fort Worth (LCS-3), a Freedom-variant LCS, was sidelined in Singapore for nearly half the year following a casualty with the ship’s propulsion system. By April, the Navy determined it was more effective to send Fort Worth back to San Diego for repairs during the summer, even after considering the cross-Pacific transit would take about six weeks and involve several underway replenishments and refueling stops.

The Singapore-based maintenance staff today is a combination of active-duty Navy personnel, civilian employees and contractors working out of Changi Naval Base in Singapore, Rosso said. The team can also meet an LCS in another regional port if a maintenance issue occurs while out on patrol.

For Rosso, that scenario played out when Montgomery pulled into Sattahip, Thailand. An expeditionary maintenance team from Singapore met the ship in Thailand and was able to fix the ship. The Navy plans to use maintenance away teams as a way to keep LCSs on patrol longer.

“There’s expeditionary maintenance that’s scheduled for the ship going forward so that we can continue being a forward presence away from our maintenance hub here in Singapore,” Rosso said.