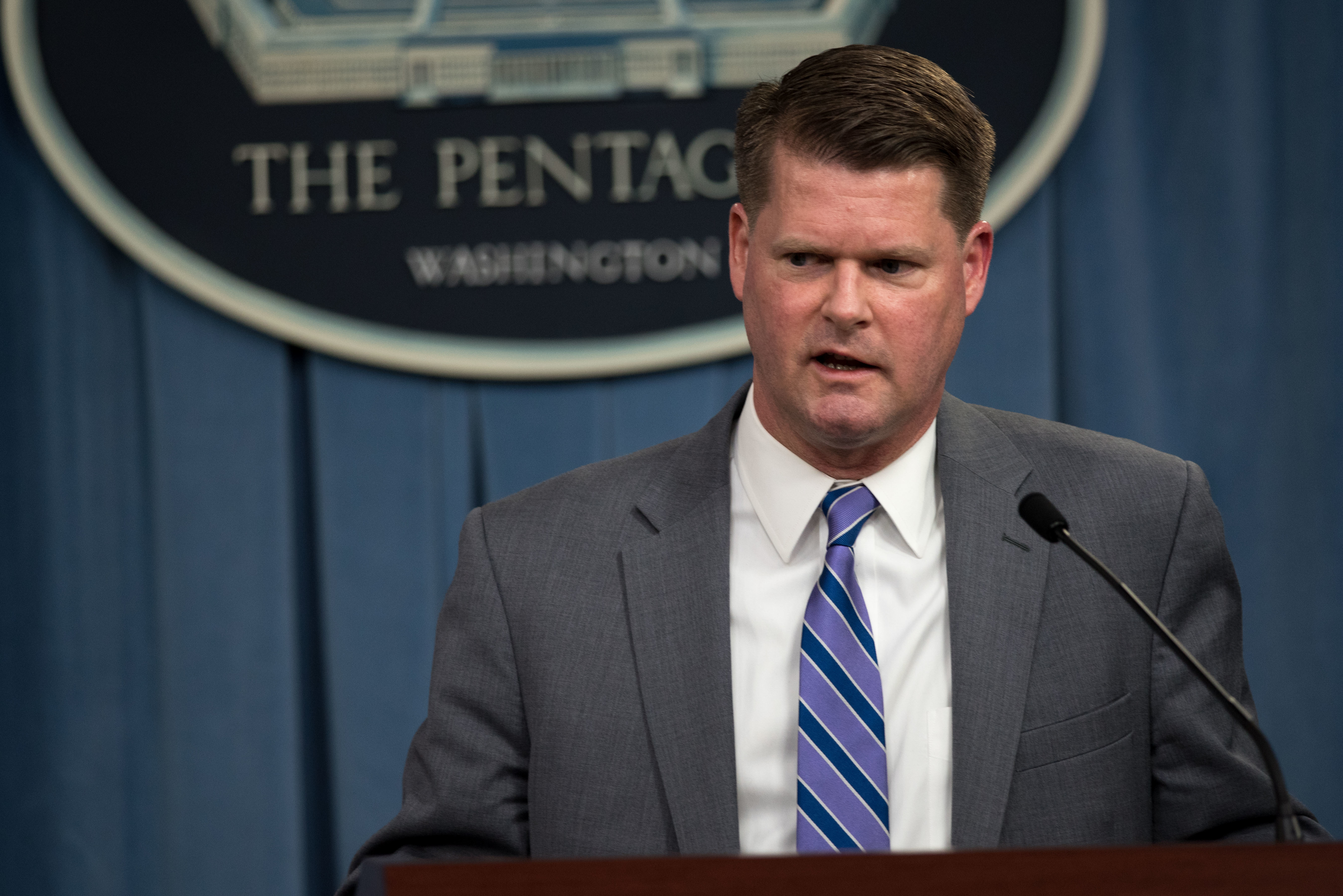 U.S. Assistant Secretary of Defense for Indo-Pacific Security Affairs Randall G. Schriver speaks to reporters on the 2019 Report on Military and Security Developments in China at the Pentagon, Washington, D.C., May 3, 2019. DoD photo.

Japan and South Korea would be “much better off removing obstacles, rather than making it more difficult” to share critical intelligence about ballistic missiles launched from North Korea and possible cyber and space threats they face from Pyongyang or Beijing, the senior Pentagon official charged with that region’s security said Wednesday.

South Korea has said it would pull out of the trilateral General Security of Military Information Agreement with Japan and the United States by Nov. 22, but Randall Schriver, assistant secretary of defense for Indo-Pacific security affairs, said “there is simply too much at stake” to let that agreement lapse.

“The only winners are competitors,” as most recently demonstrated in July when Russia and China launched joint air patrols with strategic bombers over the East China Sea, he said at an event at the Center for Strategic and International Studies in Washington, D.C.

“We will continue to pursue bilateral and trilateral relations where possible.”

The South Korean government’s announcement came in retaliation to Japan removing it from a list of preferred trading partners earlier this summer. In a tit-for-tat response to the trade action, Seoul scratched out Japan from its list of preferred partners.

The trade spat and possible scrapping the intelligence-sharing accord are the latest flashpoints between the two American allies.

Disputes between the two date back to Japan taking control of the Korean peninsula in the early 20th century and were exacerbated by its treatment of Koreans during World War II.

In answer to a question, Schriver said the United States “was not forewarned” by Seoul that it intended to let the agreement lapse.

The short-hand way of looking at the agreement is that it removes the United States as the broker of intelligence between its two allies. He called previous arrangements “cumbersome,” but the endangered pact allows the exchange of critical intelligence to take place “as fast as technology can move information.”

“We have repeatedly made it clear to the [President Moon Jae-in] administration” that it is in its best interest to resolve the trade dispute amicably by looking forward, not backward, Schriver said. He added that top-level American officials, including Defense Secretary Mark Esper and National Security Adviser John Bolton in their most recent stops in the region, made the same point to Tokyo. He carefully ruled out the word “mediator” as describing the United States’ role now and in the future between the two nations.

“This is truly our priority theater,” Shriver added. Japan and South Korea “need to get back to intelligence sharing and meaningful dialogue” to resolve the trade disputes that threaten the agreement “that have now bled over into security issues.”

“Both bear the costs and both bear the responsibility” if the dispute leads to ending the intelligence-sharing agreement. It also covers enforcement of U.N. sanctions against North Korea’s imports of petroleum products, banned manufacturing goods and products and “the full range of maritime issues.” He specifically mentioned anti-submarine patrols and anti-piracy operations by all three nations in the Indian Ocean. 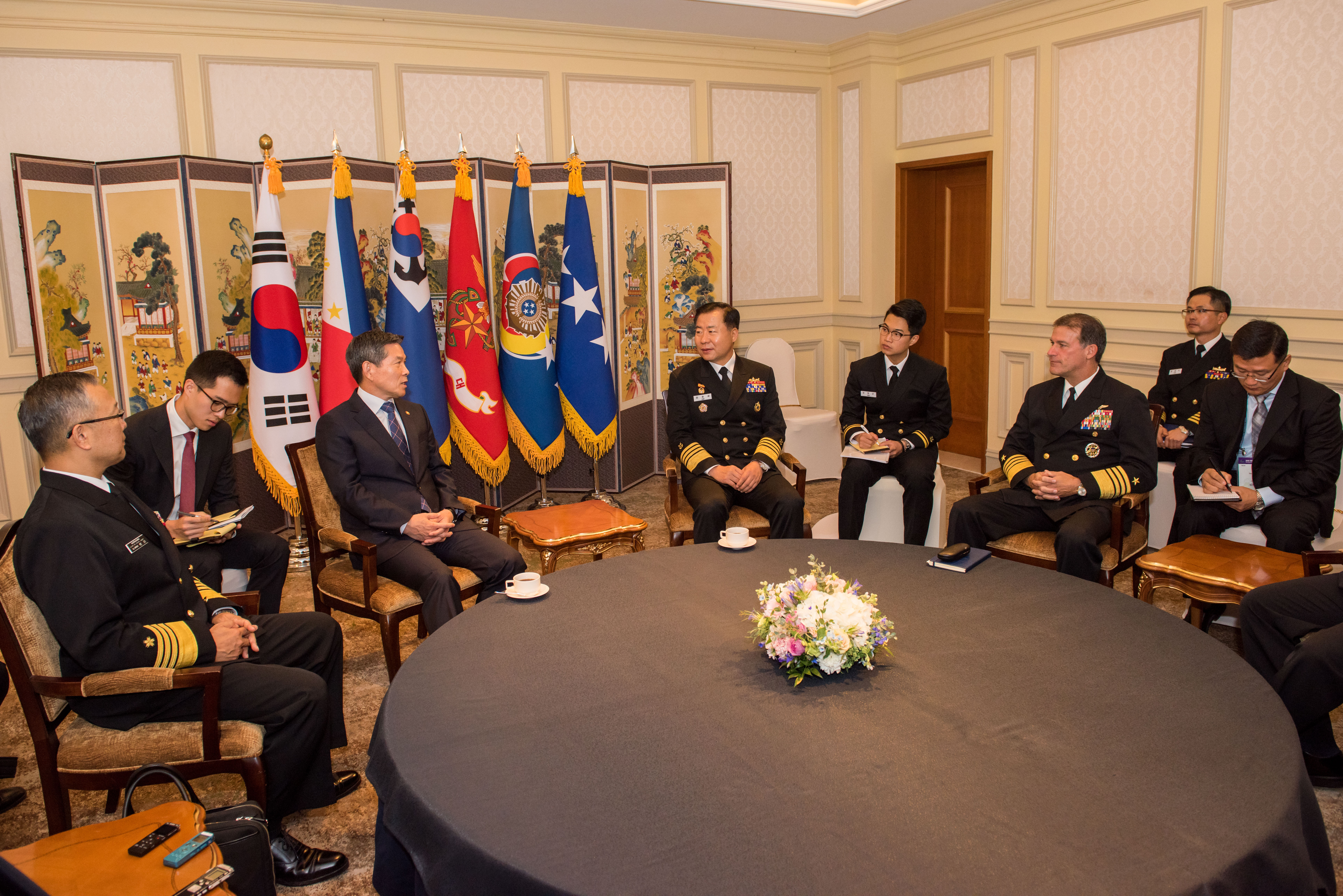 When asked to assess North Korea’s seven sets of short-range missile tests, Schriver said Pyongyang could be looking for political maneuvering space for any future talks with the United States, but the tests could also be seen “as critical steps in modernization” of weapons that pose a direct threat to forces on the peninsula.

In a follow-up question, he reported “no progress on the key issue – denuclearization” – in dealing with North Korea following the Singapore summit between President Donald Trump and Chairman Kim Jong-un.

He said the scaled-back military exercises with South Korea have been able to keep American and ROK forces at a high level of readiness. The exercises include high-level joint simulations of crises to work out details of how a dual command must operate in those circumstances.

The regularly scheduled bilateral exercises were scaled back to provide diplomats with space to discuss Pyongyang’s nuclear weapons and missile programs.

Despite their reduced size and scope, “we feel confident” that the forces are being trained in mission-essential tasks if an attack came from North Korea.

On North Korea returning remains of service members killed in the Korean War, Schriver said, “our belief is they hold more,” but so far there has been no more movement in joint discovery than the handover of 55 boxes of remains a year ago.

The return of remains was also part of the agreement between the United States and North Korea reached in Singapore.

“Arguably our best partner has been Vietnam” in joint discovery operations, he said. The United States “certainly would” return to North Korea to find and bring back additional remains of service members through joint discovery work there, much like it does with the Vietnamese, he added.