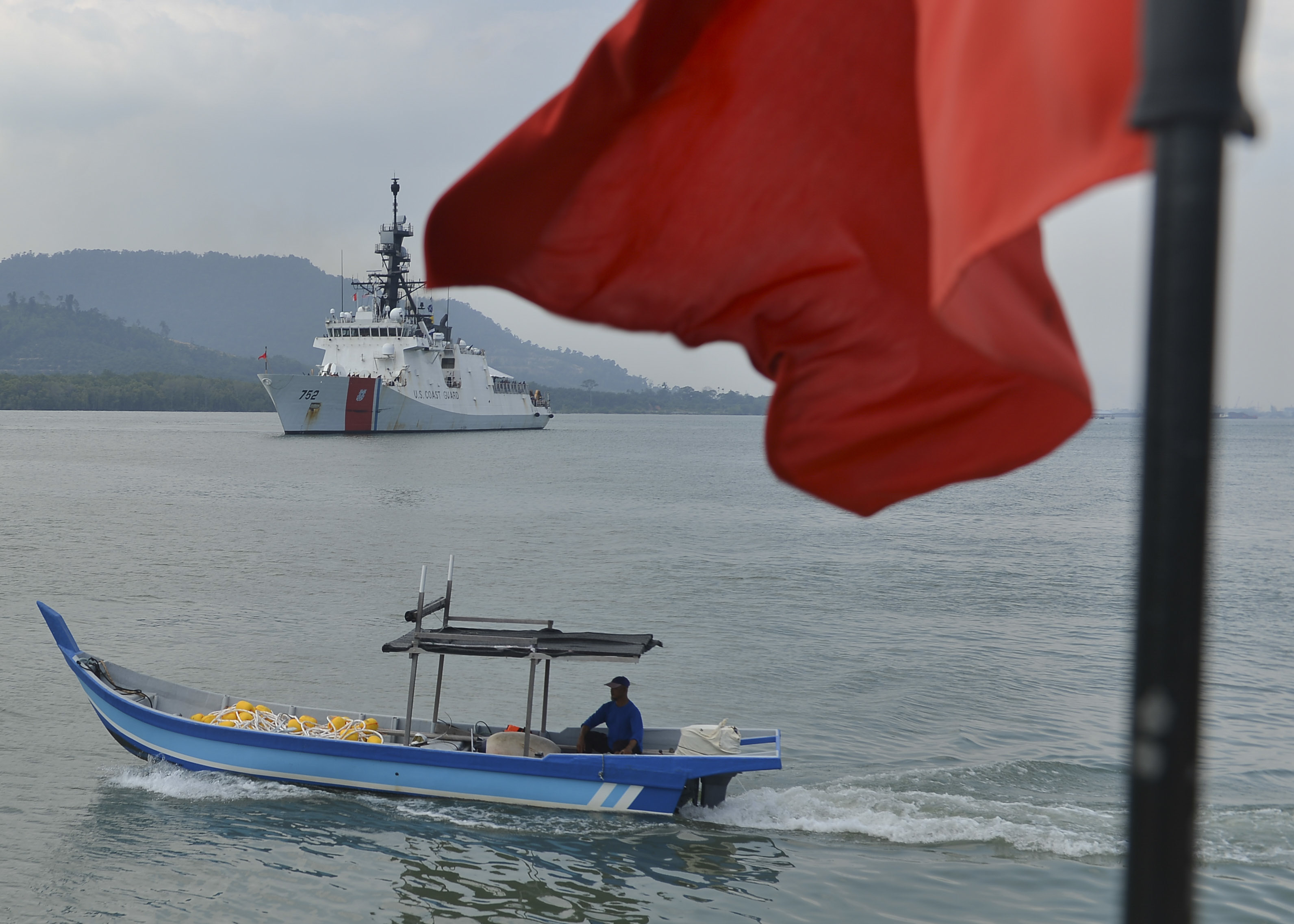 “That is very much an ongoing conversation right now, at this point, Stratton will return in late fall to Alameda, Calif. I do expect we will have some level of major U.S coast guard cutter deployment to some part of the region but that is very much an ongoing conversation as to how long, where, the [operational] relationship with Pacific Fleet and 7th Fleet,” she said.

The conversation comes as the Coast Guard and the Navy are exercising with Malaysian forces as part of Maritime Training Activity (MTA) Malaysia 2019. In addition to Stratton, the Navy has sent Littoral Combat Ship USS Montgomery (LCS-8), salvage ship USNS Salvor (ARS-52), expeditionary fast transport ship USNS Millinocket (T-EPF-3), Mobile Dive and Salvage Unit 1, an MH-60S Seahawk helicopter and an MH-65 Dolphin helicopter. They will exercise with the Royal Malaysian Navy (RMN) and the Malaysian Maritime Enforcement Agency (MMEA). Following the exercise, Stratton will head to India to conduct port visits and engagements and then move on to the Pacific islands.

Fagan added that the Coast Guard was now also carrying out Operation Aiga in the Pacific Islands. The operation is a 30-day deployment of a 225-foot Juniper-class buoy tender and the Fast Response Cutter USCGC Joseph Gerczak (WPC-1126) to partner with Pacific island nations. Both the ships have been at Pago Pago, American Samoa and are currently conducting activities in the vicinity.

“We’re doing that as a proof of concept this summer with the intention of having a similar deployment for a lengthier time period next summer. Again that is all in the planning and discussion phases as to how long, which partner nations and where,” she said.

The Coast Guard has also discussed on providing Military Training Assistance and Law Enforcement training teams, “I’m hopeful that that conversation will move in a productive way for our partners in the region,” she said.

The simultaneous commissioning of two National Security Cutters in Honolulu next week, the USCGC Kimball (WMSL-756) and USCGC Midgett (WMSL-757), the Coast Guard will have additional capacity to bring to the Pacific.

“These have been incredible ships and we’re fortunate we get congressional support for the ships, they have been absolutely critical to our counter-narcotics efforts in the Eastern Pacific and responsible for some of the record-breaking interdictions we had over the past couple of months,” she said.

The main challenge for the Coast Guard in the Asia-Pacific is to ensure that its activities and actions achieve the best effect, “The challenge for us is that many of the Pacific Island nations, threats that they face, are the type of things that we as a Coast Guard are postured to address, whether it’s law enforcement, search and rescue, Illegal, unregulated and unreported fishing, and we view ourselves as the world’s best Coast Guard and we have many friends and partners in the region who we work alongside to continue that engagement, the challenge is there’s just not a lot of us to go around so it’s making sure the capacity that we do have to dedicate to the region are applied for best effect and we’ll continue to do that as a Pacific nation, it’s too critical to not be engaged where and how we can and that gets balanced against the totality of the risks that the Commandant balances as the head of the Coast Guard.”

“We’re fielding the new assets, they bring with them increased capability and we are committed to applying that capability for best effect against the threats that are posed against the U.S, threats in the Pacific and we’ll continue to do that and look at how those ships can be employed to ensure that we’re being good stewards of the resources that the American public has trusted with us and provide for national security and safety,” she said.