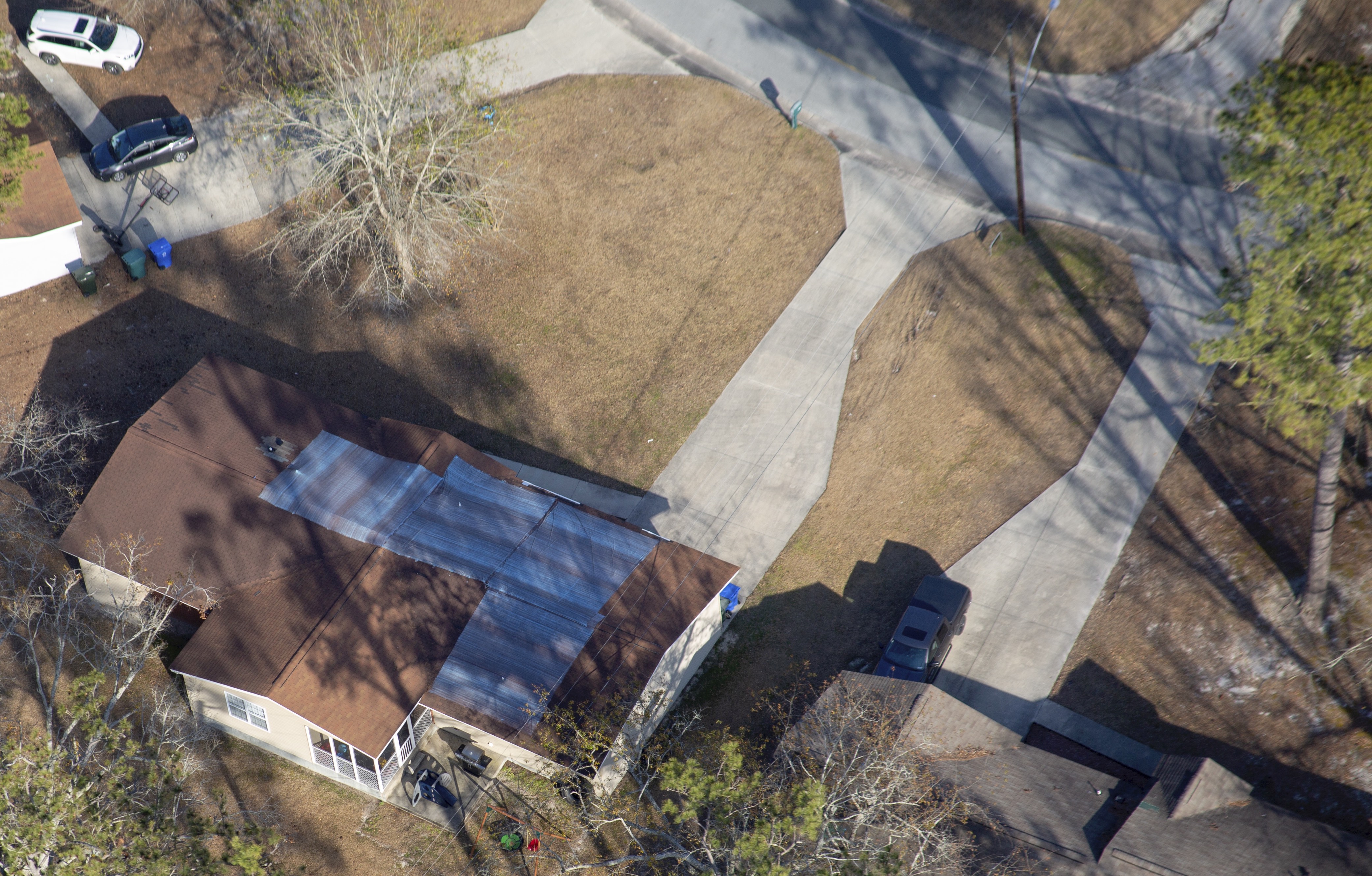 Blue tarps line the roof of a home in Paradise Point on Marine Corps Base Camp Lejeune, N.C. on Feb. 1, 2019. US Marine Corps Photo

After Hurricane Florence dumped more than two feet of rain on Camp Lejune, N.C., last year contractors from across the East Coast came to repair damaged buildings and infrastructure on the Marine Corps base. However as the work has gone on, companies contracted to do the housing repair work have gone months without pay.

One contractor, Tyler Construction Group was forced to pull its crews off the job at Camp Lejeune, N.C. after the amount it was owed topped $1 million. The Columbia, S.C.-based family-run firm hadn’t been paid in more than three months, Charles Tyler, president of Tyler Construction Group, recently told USNI News. His crews were hired to do general repair work and had a large duct cleaning crew on site.

“We have a contract to get paid,” Tyler said. “We’re a small business. We can’t carry $1 million.”

The reason payments stopped, Tyler said, was the housing management company told him funding for hurricane-related repairs was entirely spent by the start of summer. Additional funds would be available when Fiscal Year 2020 started on Oct. 1. Under this scenario, contractors were looking at going nearly six months without being paid for repair work.

Atlantic Marine Corps Communities (AMCC) manages the on-base housing communities at Camp Lejeune and Marine Corps Air Station New River. When Hurricane Florence made landfall on the North Carolina coast last September, the storm dumped 25.28 inches of rain in Jacksonville, N.C., home to Camp Lejeune. AMCC reported 70 percent of the 6,182 base housing units it manages in the region were damaged from the hurricane.

“To date, more than 90 percent of our homes have been restored thanks to the dedicated efforts of many local subcontractors coming to the aid of our military members and families,” Ron Johnson, the project manager for AMCC said in a statement provided to USNI News. “We continue the work we began last year to restore our storm-damaged homes at AMCC.”

AMCC officials did not dispute Tyler’s account when asked by USNI News about contractors not being paid for hurricane-related repair work at Camp Lejeune and New River. After first being contacted by USNI News, the company said it had received military approval to access funds from a special Navy-controlled contingency account to cover the shortfalls, Johnson said in a statement to USNI News.

The Navy has approval authority over the use of the funds and AMCC was required to justify the need for accessing this money.

“This approval has a defined process that includes the expected levels of due-diligence and high-level review for matters of this importance. AMCC and our Navy partners look forward to continuing our commitment to the restoration process going forward,” Johnson said in a statement to USNI News.

The funding Johnson referred to is a recapitalization account for the base housing project they manage. Funds withdrawn from this account by AMCC require Naval Facilities Engineering Command and Marine Corps Installations Command approval. Both commands are considered partners, Nat Fahy, a spokesman for Marine Corps Installations East told USNI News.

After USNI News contacted AMCC, Tyler confirmed he’d been told the company would soon be making payment to contractors.

Sen. Thom Tillis (R-N.C.) plans to visit Camp Lejeune during the congressional summer break and is likely to ask why there was a delay in accessing the reserve funding. Tillis, a member of the Senate Armed Services Committee, discussed the ongoing hurricane-related repairs at Camp Lejeune and New River last week during the confirmation hearing of Vice Adm. Michael Gilday. Calling the repairs a “priority,” Tillis asked Gilday to commit to helping reduce the backlog.

“Senator Tillis is aware of this issue and our office has been looking into it. Senator Tillis and his staff will be visiting Camp Lejeune soon to learn more about the cause of the payment issue,” said a statement from his staff when contacted by USNI News.