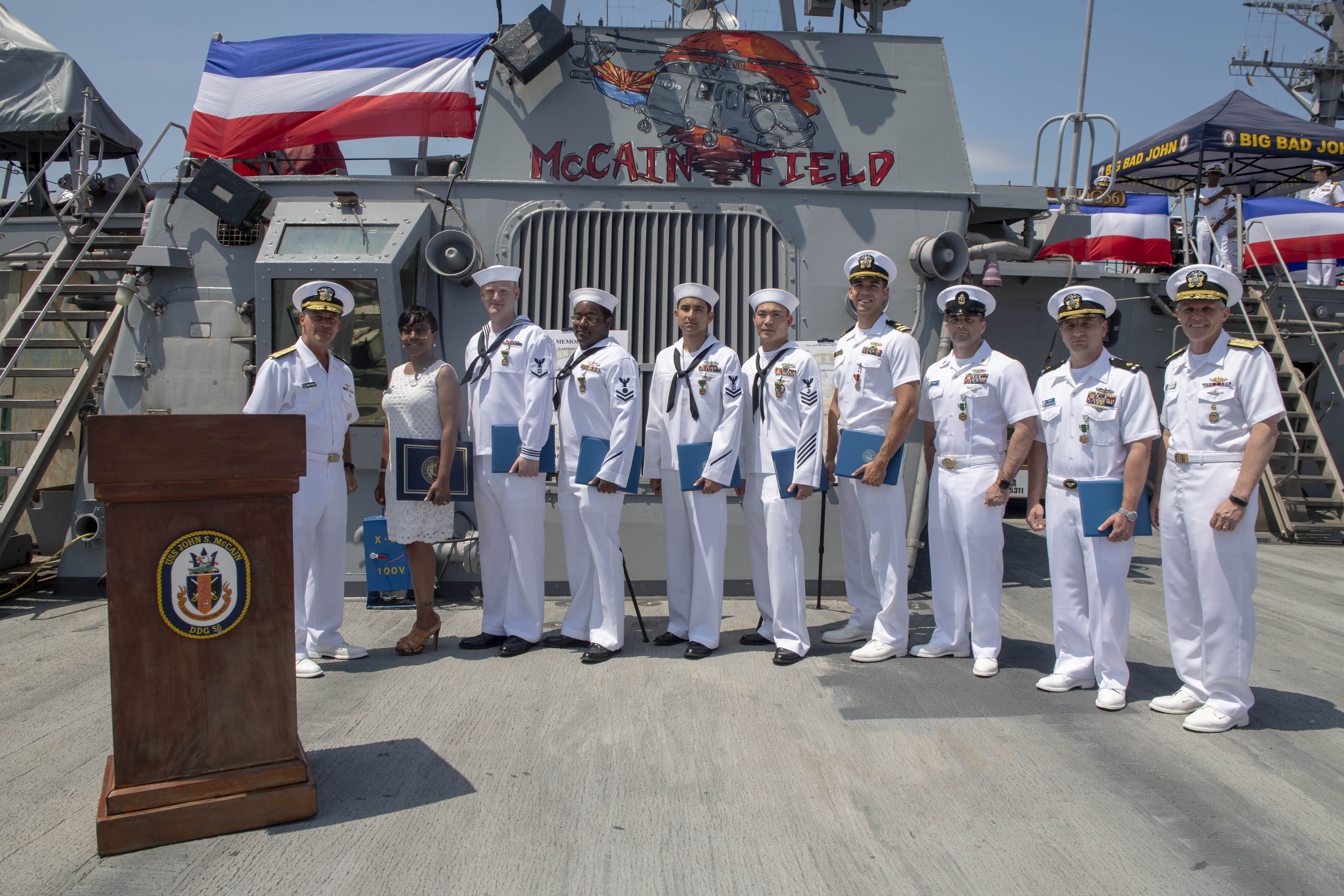 The Navy honored 50 sailors today for their efforts to save lives and save the ship after USS John S. McCain (DDG-56) collided with a merchant ship two years ago.

Ten sailors died in the Aug. 21, 2017, collision near the Strait of Malacca. Navy leadership deemed that the 50 sailors who are being honored for their bravery helped prevent further loss of life or damage to the ship.

“The crew fought back against progressive flooding across numerous spaces for hours on end. Facing constant peril from flooding, electrocution, structural damage and noxious fumes, these sailors prevented further loss of life and ultimately saved the ship,” according to a Navy release.

Seven of the sailors were present during a ceremony today aboard McCain in Yokosuka, Japan.

“To commemorate on this ship what these men and women did is both notable and fitting, because the memory of their actions represent the toughness and pride of our Navy,” Adm. John Aquilino, U.S. Pacific Fleet commander, said during the ceremony, according to the news release.
“It also helps remind the next generation of sailors the moral character, personal sacrifice, and selfless commitment required to not give up the ship.”

“This morning you will hear about a crew that, in the midst of chaos and calamity, displayed exceptional initiative, technical competence, teamwork, grit, determination, and an unconquerable spirit,” Cmdr. Ryan Easterday, McCain commanding officer, said during the ceremony.
“Today is about publicly sharing the untold stories of heroism from the collision—the second, more positive half of a painful chapter in the ship’s history.”

According to a Navy instruction, the Navy and Marine Corps Medal – the highest medal awarded for heroism in non-combat situations – is “awarded to individuals who, while serving in any capacity with the U.S. Navy or the U.S. Marine Corps, distinguish themselves by heroism not involving actual conflict with the enemy. For acts of lifesaving, or attempted lifesaving, it is required that the action be performed at the risk of one’s own life.”

The Navy instruction adds that the Navy and Marine Corps Commendation medal is “awarded to individuals (including foreign military personnel) who, while serving in any capacity with the U.S. Navy or Marine Corps, distinguish themselves on or after 7 December 1941, by heroic or meritorious achievement or service. To merit this award, the acts or services must be accomplished or performed in a manner above that normally expected, and sufficient to distinguish the individual above those performing similar services.”

For the Navy Achievement Medal, “the award may be authorized for meritorious service or achievement in a combat or non-combat situation, based on sustained performance or specific achievement of a superlative nature.” 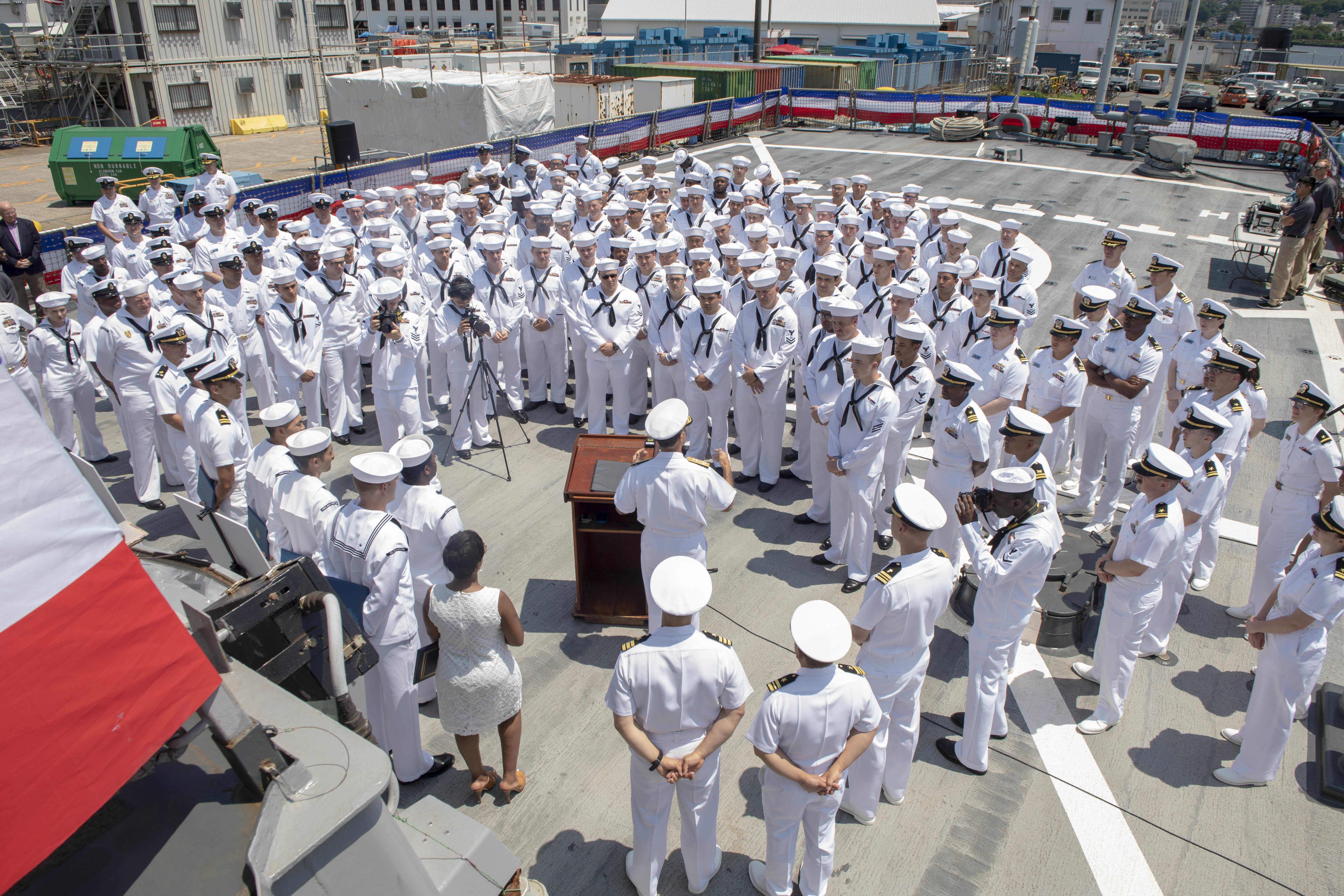 Aquilino and U.S. 7th Fleet Commander Vice Adm. Phil Sawyer awarded seven sailors their medals in person at the ceremony. Sawyer conducted a similar ceremony in October 2017, honoring 36 sailors from USS Fitzgerald (DDG-62) for bravery and heroism when that ship had its own collision with a merchant ship just two months before the McCain collision.

The full list of McCain sailors who were honored today is: