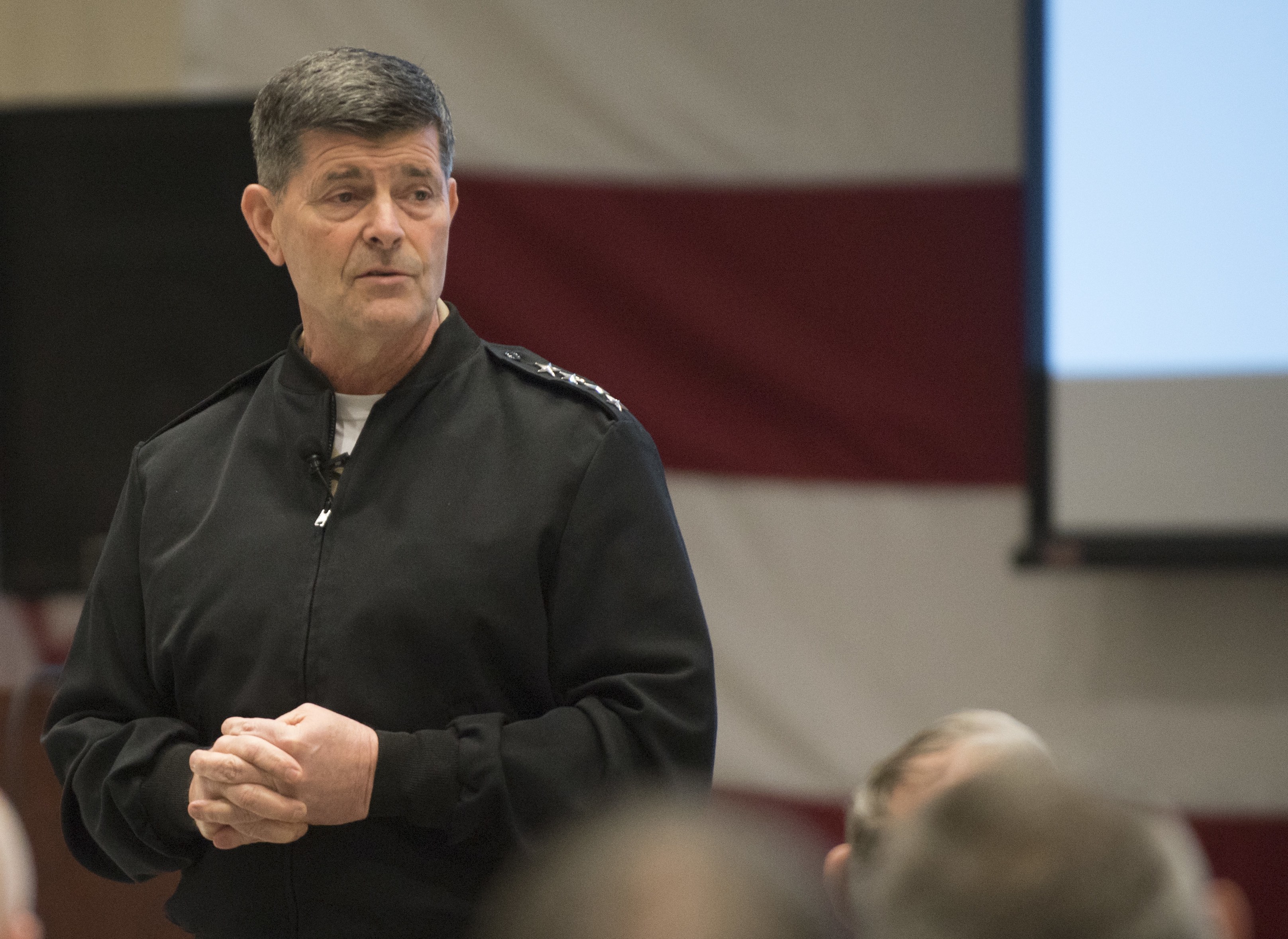 Vice Chief of Naval Operations Adm. Bill Moran speaks to command master chiefs from around the Navy at the 2019 Leadership Mess Symposium on March 27, 2019. US Navy Photo

The Navy has just weeks to find a new nominee to lead the service, as the Senate has a long list of defense nominees to consider – including the top two positions in the Pentagon – and a five-week recess coming up in early August.

Before his abrupt retirement announcement on Sunday, Adm. Bill Moran was slated to take the helm of the service in a ceremony at the U.S. Naval Academy on Aug. 1, after being confirmed for the job in May.

In mid-September, Chief of Naval Operations Adm. John Richardson is required to give up his leadership of the service as outlined in U.S. law.

But in addition to the law requiring the replacement to be found and confirmed before that Sept. 17 deadline, the Senate faces scheduling challenges of their own. The Senate Armed Services Committee and then the full Senate must review and confirm nominations for the secretary of defense, deputy secretary of defense and the chairman of the joint chiefs of staff. The Senate and the White House are also facing several open civilian positions in the Department of Defense that have yet to be filled.

The timeline is further compressed, as the Senate will be in recess from Aug. 5 to Sept. 6 – leaving less than 30 working days until Richardson’s mandatory retirement date.

A statement from Secretary of the Navy Richard V. Spencer’s office said on Monday the service was moving quickly to select a new CNO nominee.

“All three- and four-star admirals are eligible to be recommended for service as the CNO. The Secretary of the Navy will make his recommendation based on who is the best and most fully qualified officer for the position,” read the statement. “[Spencer] is committed to quickly recommending a new CNO for nomination, and he will move to that decision urgently but deliberately.”

No clear front runner has emerged as the next CNO, speaking to the abruptness of Moran’s retirement.

On Sunday, Moran announced that he was stepping aside from the CNO job and electing to retire due to “an open investigation into the nature of some of my personal email correspondence over the past couple of years and for continuing to maintain a professional relationship with a former staff officer, now retired, who had while in uniform been investigated and held accountable over allegations of inappropriate behavior.”

That officer, Richardson’s former spokesman Cmdr. Chris Servello, had been investigated by the service over multiple complaints of misconduct from multiple women during and after a 2016 holiday party. Investigators found the incidents did not rise to the “level of criminal sexual harassment” but that the PAO “consistently failed to demonstrate the maturity or judgment that would be expected of an officer in his position,” according to a 2018 Pentagon Inspector General investigation.

In a statement to flag officers and senior Navy civilians obtained by USNI News, Richardson said, “Adm. Moran, as VCNO, had maintained an off-the-record collaboration on high-level official Navy business with an officer who had previously been held accountable for inappropriate behavior towards junior female officers. Adm. Moran recognized that the nature of this collaboration made it untenable for him to serve as the CNO, which is why he requested to retire.”

Servello worked for Richardson for eight months after the December 2016 party before being removed from the spokesman position. The delay in removal prompted a 2018 inspector general investigation into Richardson’s handling of the Servello case. The IG found that [Richardson] “did not take sufficient action to ensure that his decision was implemented in a timely manner.”

Servello was reassigned to a role at the Defense Media Activity and retired from the Navy earlier this year. Richardson apologized publically before a hearing of the Senate Armed Services Committee in April 2018.

“I’ve become acutely aware that that may have sent a bad message, particularly to the survivors of the behaviors,” Richardson told the panel.
“If I was going to do it again, I would have moved faster.”

The ongoing relationship between Moran and Servello past his removal from the CNO spokesman job was brought to light following a Freedom of Information Act request earlier this year from USA Today. The paper requested emails between the two, the paper reported on Sunday. USNI News confirmed with several defense officials that the Sunday report was accurate.

USNI News has not reviewed the emails; however, sources who are familiar with the contents said that, despite discussion of what Richardson said in the message was “high-level official Navy business,” there was nothing inherently unethical nor unprofessional in the contents of the communications.

On Sunday, Secretary of the Navy Richard V. Spencer described the relationship as “professional.”

Rather, the concern from senior Navy leaders – including Richardson and Spencer – was the ongoing relationship with Servello as an unofficial advisor to Moran.

The volume of communication between the pair prompted the Navy Inspector General to open a case that was passed on to the Department of Defense IG office and is currently under investigation.

Based on the preliminary evidence, Spencer made the decision to withdraw his support from Moran’s nomination to serve as CNO late last week and prompted Moran’s request to retire, sources told USNI News

“This is an extremely difficult situation, but importantly, this matter strongly reinforces the importance of trust, and the high standards of behavior needed to secure that trust. The American people expect this from us,” Richardson said. “We must expect and enforce this standard for ourselves.”

Requirements for Chief of Naval Operations

The president appoints individuals to become Chief of Naval Operations with the “advice and consent of the Senate,” according to 10 U.S. Code 5033. Qualifications for becoming CNO are somewhat vague, stating in paragraph 2, “The President may appoint an officer as the Chief of Naval Operations only if – (A) the officer has had significant experience in joint duty assignments; and (B) such experience includes at least one full tour in a joint duty assignment (as defined in section 664(f) of this title) as a flag officer.”

The position of CNO was first created 100 years ago, by an act of Congress, as Navy leadership and President Woodrow Wilson were concerned about the Navy’s preparedness to fight in what was already a world war raging in Europe, according to the U.S. Naval History and Heritage Command.

Of the 32 admirals appointed CNO, two did not graduate from the U.S. Naval Academy: Adm. Jeremy Boorda attended the University of Rhode Island, and Adm. Vernon Clark attended Evangel College in Springfield, Mo.

The Navy currently has eight four-star admirals, though two are retiring:

Adm. John Richardson, USNA ’82, is the current CNO but by law must retire by Sept. 17, four years after he became CNO.

Adm. William Moran, USNA ’81, was confirmed to become CNO, but turned in a letter of resignation earlier this week.

The following is the complete July 8, 2019 statement from Secretary of the Navy Richard V. Spencer’s office.