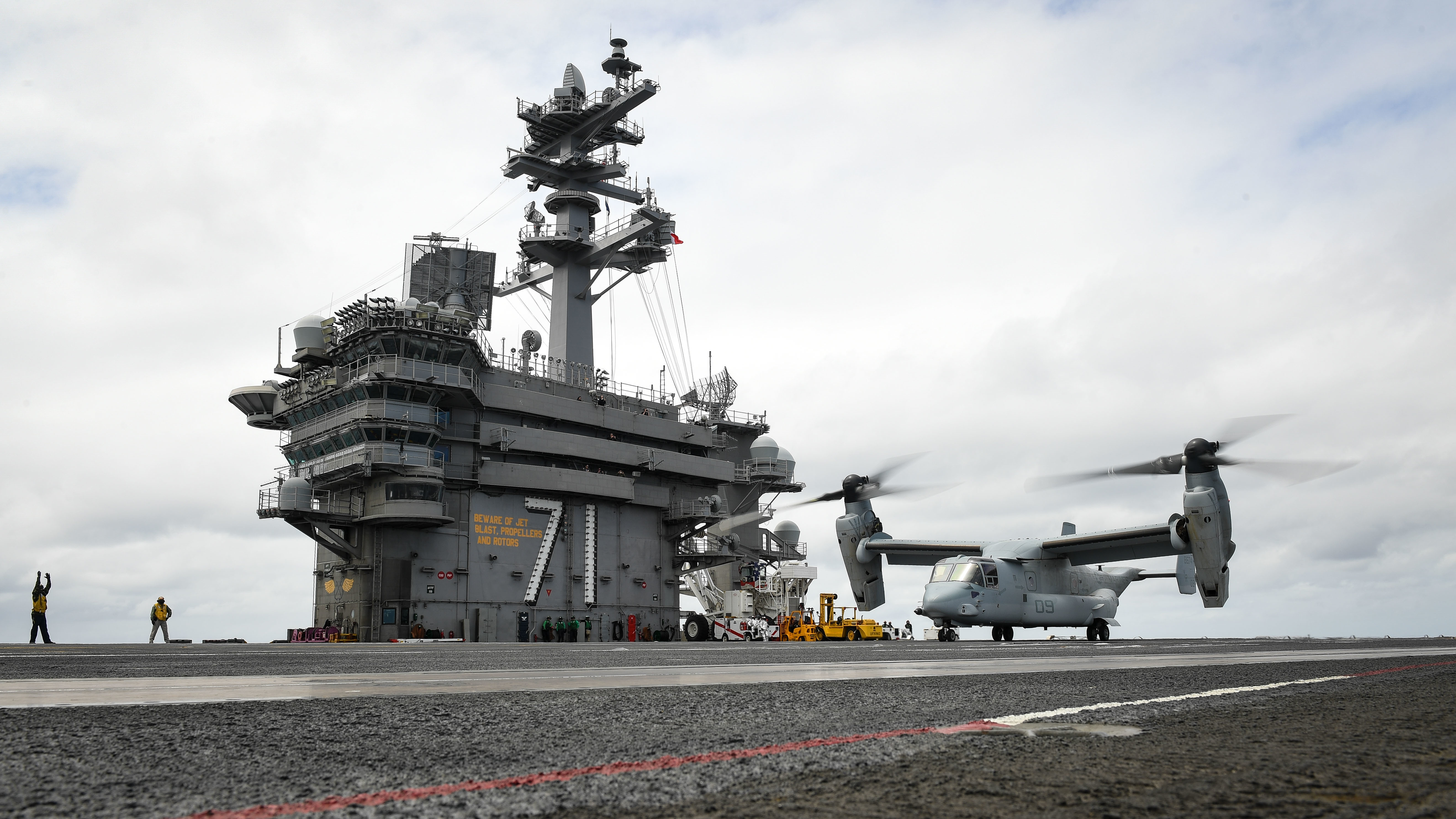 The Navy is a year away from receiving its first deployable CMV-22 Osprey, the carrier onboard delivery aircraft of the future, but pilots, aircrewmen and maintainers are already getting familiar with operating tiltrotor aircraft on aircraft carriers.

Sailors from “the Titans” of Fleet Logistics Multi-Mission Squadron (VRM) 30 are training with Marine Corps MV-22B crews and using Marine Corps-owned Ospreys to earn qualifications and understand how the aircraft handles.

“The most eye-opening thing for me was flying at night without goggles and flying in formation and landing in the middle of a forest clearing,” Cmdr. Trevor Hermann, commanding officer of VRM 30, told USNI News in a telephone interview.
“We don’t do this in a Greyhound.”

The Navy stood-up the Naval Air Station North Island, Calif.-based VRM 30 in December. The squadron’s pilots, aircrewmen and maintainers are training with three Marine aviation units to be ready for when the Navy’s first deployable Osprey arrives a year from now, Hermann said. The Navy expects delivery of a training Osprey in early Fiscal Year 2020.

Last June, the Navy bought its first Ospreys, part of a $4.2 billion contract the Pentagon signed with the aircraft’s builder Bell-Boeing. The Navy is getting 39 of the 58 Ospreys included in the contract, with the rest going to the Marine Corps., the U.S. Air Force and the government of Japan.

By using Marine Corps aircraft, Hermann said his squadron is getting a jump on the training they need to be ready to fly missions to and from the carrier. In October the Navy announced it was accelerating the transition to using Ospreys as the fleet’s COD to replace the legacy C-2A Greyhound.

“We’re targeting the first quarter of ‘21 for when we’re going to be certified safe to operate where we can start flying our own aircraft and operate as a squadron,” Hermann said.

The CMV-22, when compared to the C-2A, has an increased range, offers quicker cargo loading and unloading, has enhanced beyond-line-of-sight communications and can operate at night. The Navy has previously stated it plans to retire its last Greyhound squadron in 2024.

Recently, Hermann was the first of the Navy’s future Osprey pilots to land the tiltrotor aircraft aboard an aircraft carrier, USS Theodore Roosevelt (CVN-71) while it operated in the Pacific.

At first, the process of approaching the aircraft carrier in an Osprey is similar to what occurs in a Greyhound, until it’s time to transition to hover mode, Hermann said. The carrier is continuously moving and wind over the deck travels at 30 knots, he said. At the same time, the Osprey pilot has to move both forward and down into a confined space.

A lot is going on when orchestrating a landing, Hermann said. But when it comes to handling the Osprey, “It’s nice and stable and quite easy to land, to be honest.”

The Osprey’s takeoff is also very different from the Greyhound, which uses a catapult launch. Hermann said the Osprey gets a big boost from all the wind passing over the flight deck.

“With all that wind coming out overhead the aircraft, it leaps off the deck,” Hermann said. “I think it probably rolled five feet. Typically, you’d roll, maybe like 100 a couple 100 feet, depending on the weight you’re at. It pretty much leapt off the deck.”