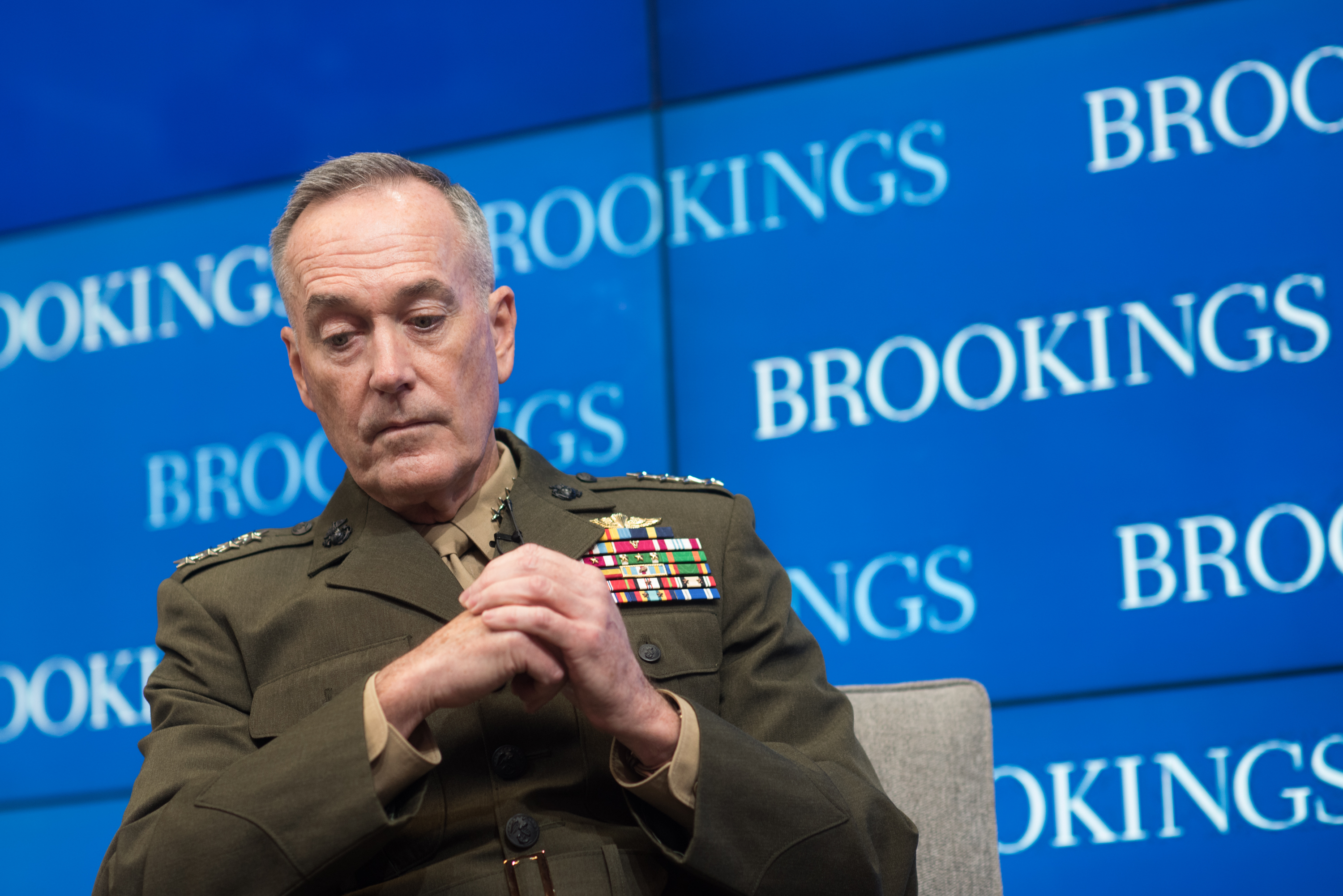 WASHINGTON, D.C. — The Abraham Lincoln carrier strike group, B-52 bombers and sophisticated air defense systems were rushed to the Middle East in early May because intelligence suggested an Iranian-led “campaign plan” taking shape to disrupt the region, the chairman of the Joint Chiefs of staff said Wednesday.

Activities from Yemen to the Persian Gulf to Iraq were “more widespread” and linked than the threats that happened in the past, Marine Gen. Joseph Dunford said during an appearance at the Brookings Institution in Washington. Dunford discussed several military threats facing the nation, including those posed by Beijing, Moscow and Pyongyang.

“Number one, we wanted the Iranians to know that if they did anything, it would be attributed to them,” he said. “We sent a message to Iran” with those immediate deployments, and the sending of follow-up forces shortly after.

After the initial response, the Pentagon announced 1,500 additional service members heading to the Middle East.

The United States also answered “the question of the will and ability of the U.S. to respond” to this level of Iranian-sponsored activity across the Middle East, Dunford said. “This is designed to protect our people, much like the previous force elements we sent in were designed to enhance our deterrence.”

Even with the first response to the intelligence reports and follow-up forces, the region is still threatened by Iran or Iranian-backed forces, Dunford said. A number of tankers were damaged by Iranian mines in the Gulf of Oman, the Saudi Arabian forces shot down an armed drone flown from Yemen near an airport and rocket attacks were launched near the American embassy in Iraq.

“Multiple threat streams … were coming together in Yemen, in the Gulf and Iraq,” Dunford said.

Washington’s response was not intended to be a provocation, he said. Rather, the steps taken were meant to deter coordinated attacks against the United States and allies and partners in the region.

When asked whether the United States is trying to engage in a military-to-military relationship as it does with Russia and China to build confidence and avoid crises, Dunford said there is no framework to base such an engagement. He also doesn’t have a similarly ranked counterpart in Iran.

When asked about Beijing’s apparent slowdown in reclaiming coral reefs and turning them into militarized artificial islands, Dunford said one reason for the construction hiatus might be China “achieved operational capability” with their reclamation projects with no immediate needs to do more.

“Clearly, [the Chinese] have walked away from that commitment” to President Barak Obama not to militarize these manmade islands. He noted they have built 10,000-foot runways, establishing air defense systems, and constructed port facilities for military vessels.

“The South China Sea is not a pile of rocks,” Dunford said. The region that should have territorial disputes settled by negotiations and where freedom of navigation in international waters should be assured under international law.

Accepting bars on freedom of transit in those waters, he said, would mean “we’ve just set a new [lower] standard] of what is acceptable.” The nation ignores international law by not challenging those actions first diplomatically and economically.

Nearing the end of his term, Dunford said, “it was newsworthy” in 2015 during his confirmation hearing that he named Russia as the number one threat facing the nation. “It’s not newsworthy now.”

Responding to questions about NATO, European defense and Russian bullying, Dunford said, “as an alliance, [NATO] is stronger than it was four years ago.”

He added the United States has steadily increased its military aid to Europe — up to $8 billion from $4 billion three years ago. The increase at first reassured NATO allies of American commitment and now deters the Kremlin from further aggression.

Standing up U.S. 2nd Fleet is integral to reassuring allies and securing the Atlantic between North America and Europe, he said.

At the same time, NATO for the first time developed metrics to measure readiness and effectiveness of the forces in the alliance and set timetable goals for the deployment of ground, air and sea forces to respond to crises. The alliance also “completed for the first military strategy written in decades.”

Moscow’s reasoning justifies its modernization of forces and use of force by wanting “to be the pre-eminent power in Eurasia,” Dunford said. Since 2015, Moscow seized Crimea from Ukraine through a rigged referendum following Russian occupation, has openly backed separatists trying to split the eastern region of Ukraine from Kiev, become heavily involved in Syria and modernized its nuclear and conventional forces. “You can’t have any other conclusion,” Dunford said.

As for President Vladimir Putin’s actions, he added Russian leaders historically, as in other autocratic nations, have undertaken foreign adventures to rally political support for themselves while distracting the public from domestic economic and social problems.

Switching to talk about the Korean peninsula, Dunford said the lack of any new talks scheduled between President Donald Trump and North Korean leader Kim Jong-un has not changed the U.S. commitment to “readiness to fight tonight” even with the cancellation of large-scale military exercises.

The U.S. and South Korean militaries have continued combined forces training at the battalion and squadron level, following agreed-upon “mission essential task” work that would be essential to react to North Korean aggression.

“There has been no change” in that level of training, Dunford said. “I am very confident today we have not compromised readiness.”

Looking at the readiness of American forces overall and the expected budgets next year and into the near future, Dunford said, “beginning in 2017 [the budgets have] made a quantitative impact on readiness” and “unit readiness is significantly better.”

Increased spending improved training and also launched investments into keeping “our competitive advantage” in high-technology weapons and systems, he said. That edge was “eroding” compared to Russia and China continued investments in areas such as electronic warfare, cyber and artificial intelligence.

Those investments in the U.S. military, Dunford said, “have to continue for several more years.”

The military does have some hard choices to make with how it spends money, he said. The Air Force plans to add manpower and the Navy’s is increasing its fleet size and adding more sailors to crew these new ships. Both situations force the services to make a capacity versus capability decision. Dunford said he would opt for choosing a capability that is sustainable. “I’ve seen us get this wrong twice” in my career, he said.