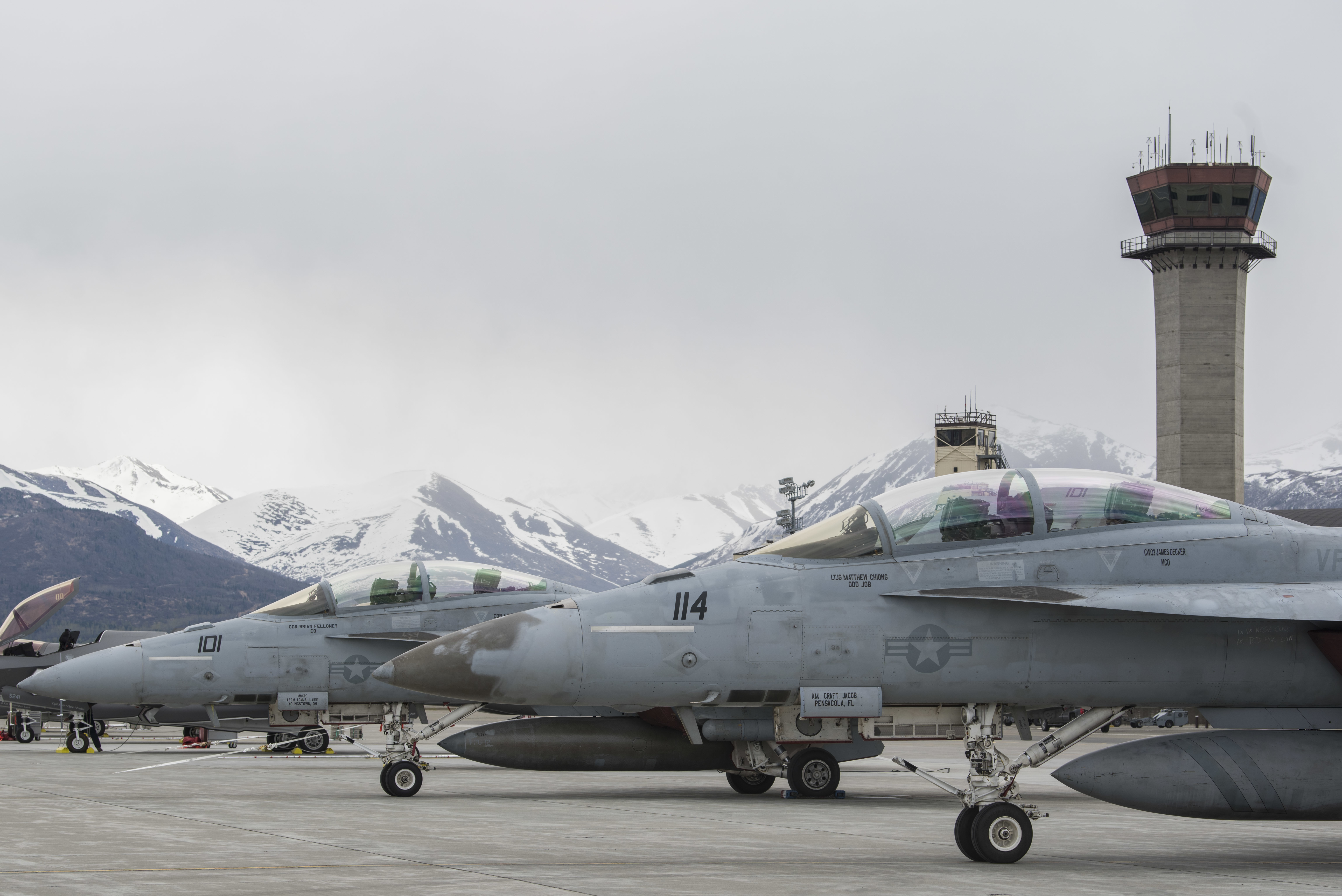 An aircraft carrier is in Alaska for Exercise Northern Edge for the first time in a decade, as the service continues to prioritize re-learning how to operate in the Arctic.

Rear Adm. Dan Dwyer, who commands the Theodore Roosevelt Carrier Strike Group, told USNI News in a phone call from aboard the carrier that “this is one of the premier exercises for the INDO-PACIFIC commanders. … Northern Edge is designed to sharpen all of our skills, tactical combat operating skills; improve our ability to command and control forces, establish those command relationships; develop our communication networks; with an overall goal of increasing interoperability within the joint force, particularly in the INDO-PACOM region.”

He said the exercise covers command and control over both land and maritime domains, and so “all participants, whether it’s the air wing or the destroyers, are integral to that mission set and each all plug into the higher command and control piece” to share information and work together under a single joint force commander.

Dwyer said his crew was excited to begin the joint event, which would pair the carrier air wing’s F/A-18E/F Super Hornets, EA-18G Growlers and E-2 Hawkeyes with ground-based Navy P-8A Poseidon maritime surveillance aircraft, Marine Corps F-35B Joint Strike Fighters and KC-130 cargo and refueling aircraft, and Air Force jets such as the F-22 and F-15. Any time that many types of aircraft come together to work in a range of mission areas “is incredibly valuable, especially as we talk about exercising at the highest potential of a joint force. So to come together with all those platforms will increase our readiness and our lethality across the board.” 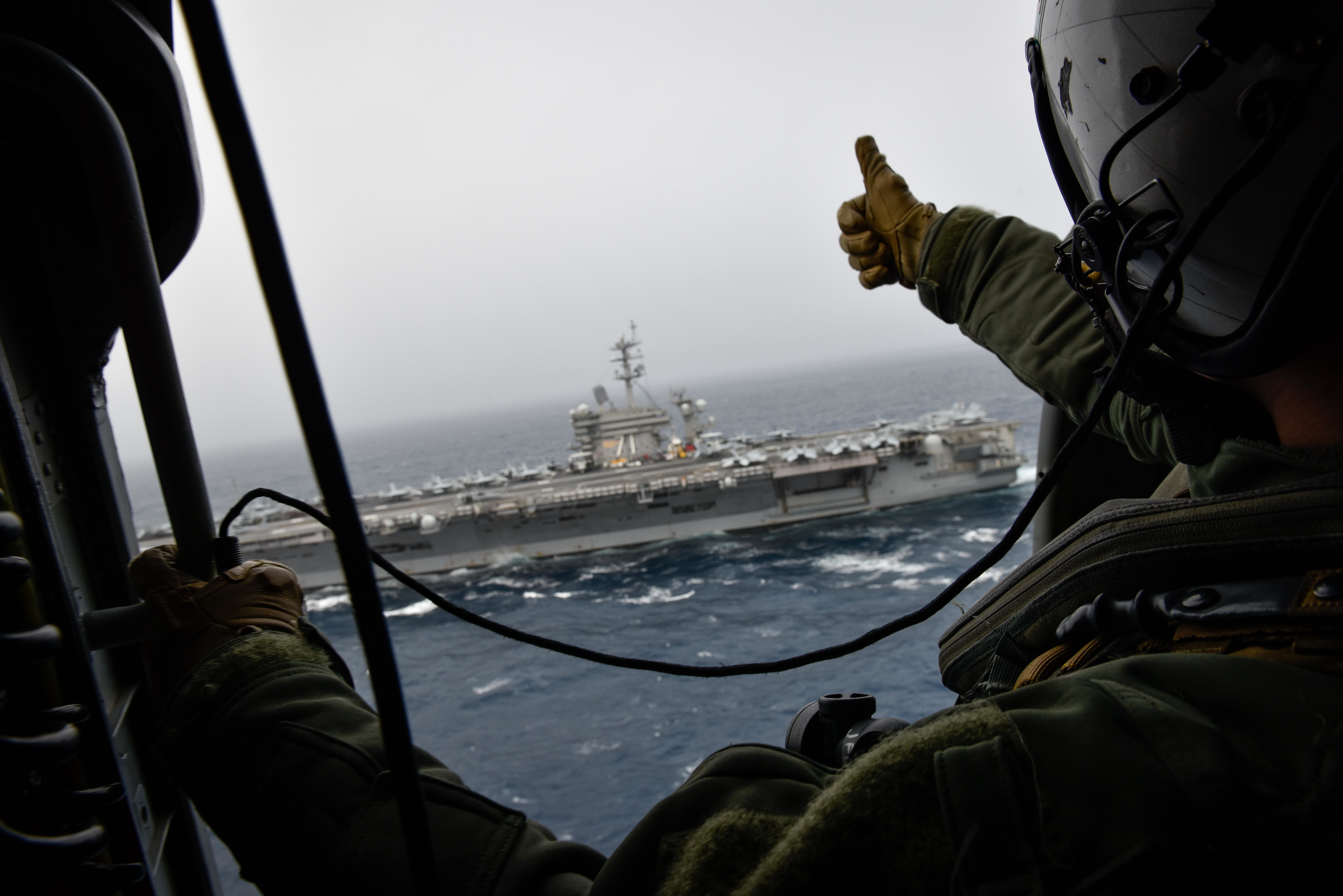 This opportunity is especially valuable to the Navy as it seeks to relearn old lessons about operating in the high latitudes. Last year’s Harry S. Truman Carrier Strike Group deployment included a jaunt north of the Arctic Circle and in frigid Norwegian waters before and during the NATO exercise Trident Juncture 2018.

Dwyer said he couldn’t speak to the Truman CSG experience, but he said the Navy has operated in the Alaskan Gulf area for 30 years and had many after-action reports for the strike group team to pore over ahead of the exercise.

“As Navy Secretary Richard Spencer told Congress recently, the Navy is deepening our commitment to Arctic security and operations in Alaska,” the admiral said.
“The Alaskan (operating area) is critical to the INDO-PACOM region. The expansive training areas offered here in Alaska provide us with an excellent environment to fully engage and conduct integrated, large-scale joint training exercises unmatched anywhere else in the United States, I must say. The Arctic ice cap is as small as we’ve seen in our lifetime, and this gives rise to increasing trade routes and sea lanes that are open more times of the year, so it’s incredibly important that we as an Arctic nation continue to operate in this area to protect this vital area to our national defense.”

“I think we all watch the news and realize for the first time in forty years the global order is being challenged by a very serious, very serious threat,” he said.
“And there’s an old adage: the more you sweat in peace, the less you bleed in wartime. And to translate that directly, the more we’re ready as a joint force, ready to respond to a crisis, the less likely our resolve will be tested.”

Heires said he believed the high-end exercise, which challenges the joint force to come together in an austere environment and face a complex threat, “will translate to our adversaries knowing that we’re ready to respond to a crisis.”