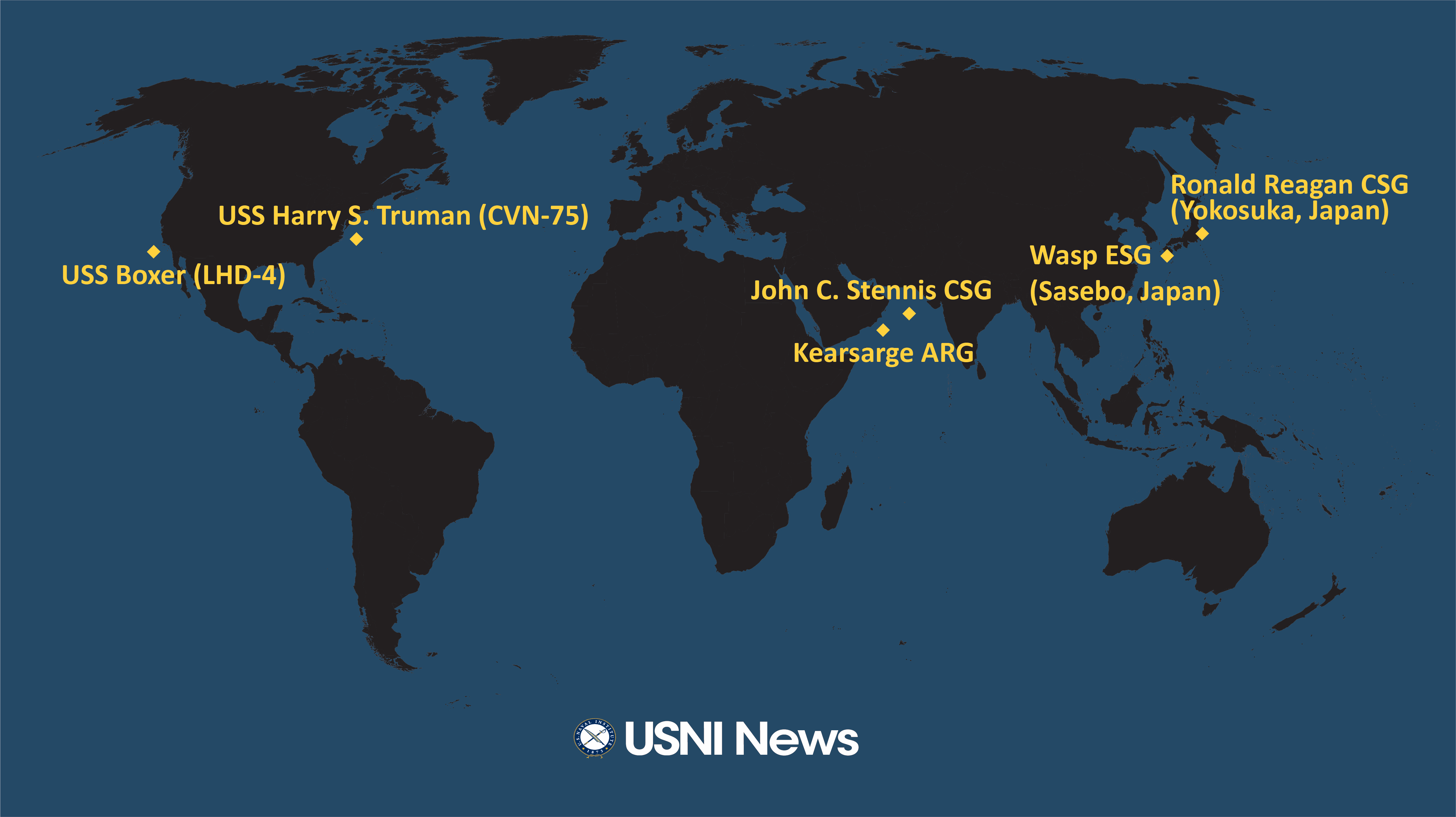 These are the approximate positions of the U.S. Navy’s deployed carrier strike groups and amphibious ready groups throughout the world as of March 18, 2019, based on Navy and public data. In cases where a CSG or ARG is conducting disaggregated operations, the chart reflects the location of the capital ship. 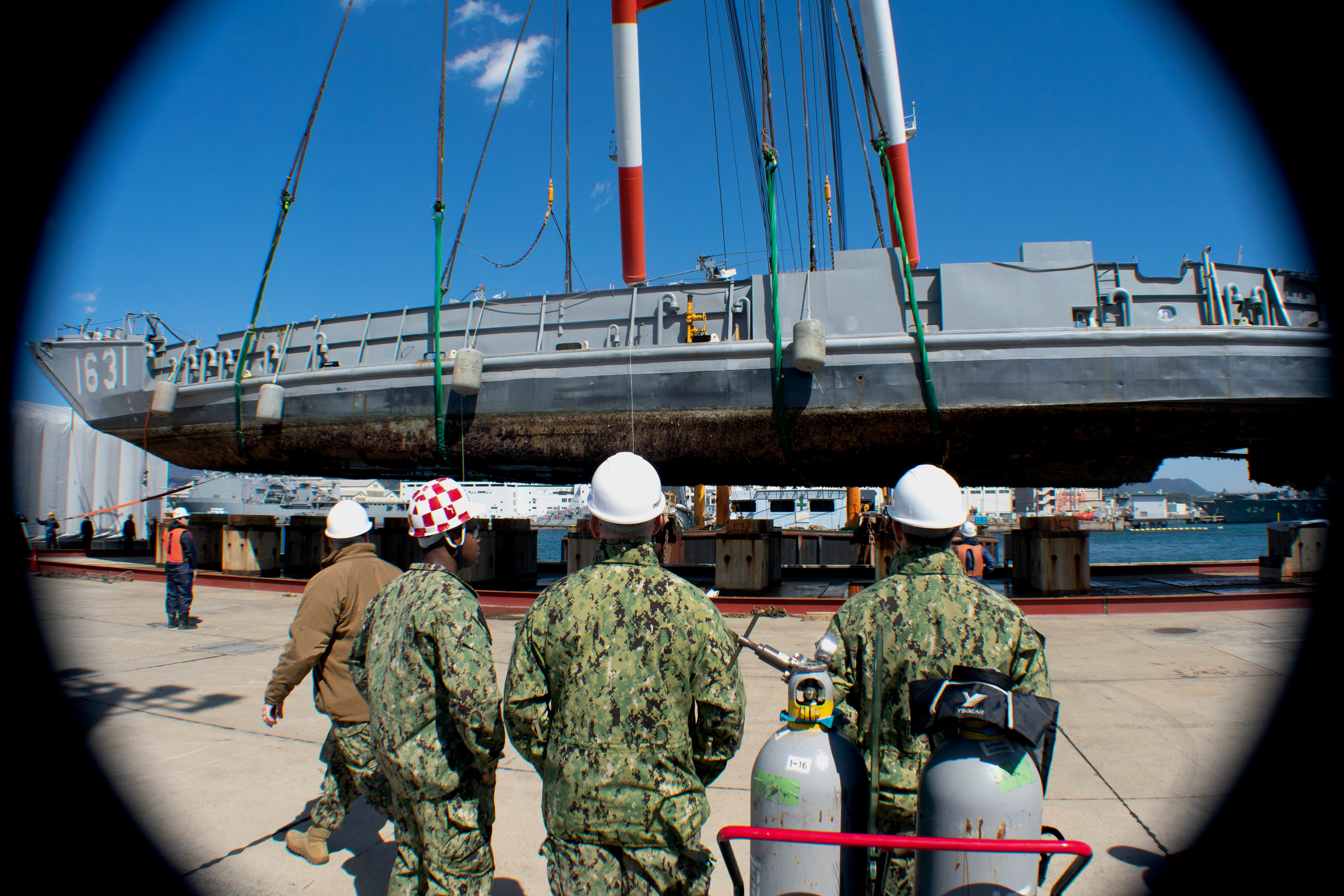 Sailors assigned to Naval Beach Unit (NBU) 7 observe the landing of Landing Craft, Utility (LCU) 1631 onto the blocks during docking at India Pier. NBU 7 serves as the training and readiness command for LCUs, landing craft, air cushions (LCACs), and beach party teams forward-deployed in Japan on March 13, 2019. US Navy Photo

The Ronald Reagan Carrier Strike Group (CSG) is in its homeport in Yokosuka, Japan. USS Wasp (LHD-1) is in its homeport in Sasebo, Japan. Later this year, Wasp will relocate to Norfolk, Va., and USS America (LHA-6) will serve as the new flagship of the Forward Deployed Naval Forces Japan (FDNF-J) amphibious fleet. 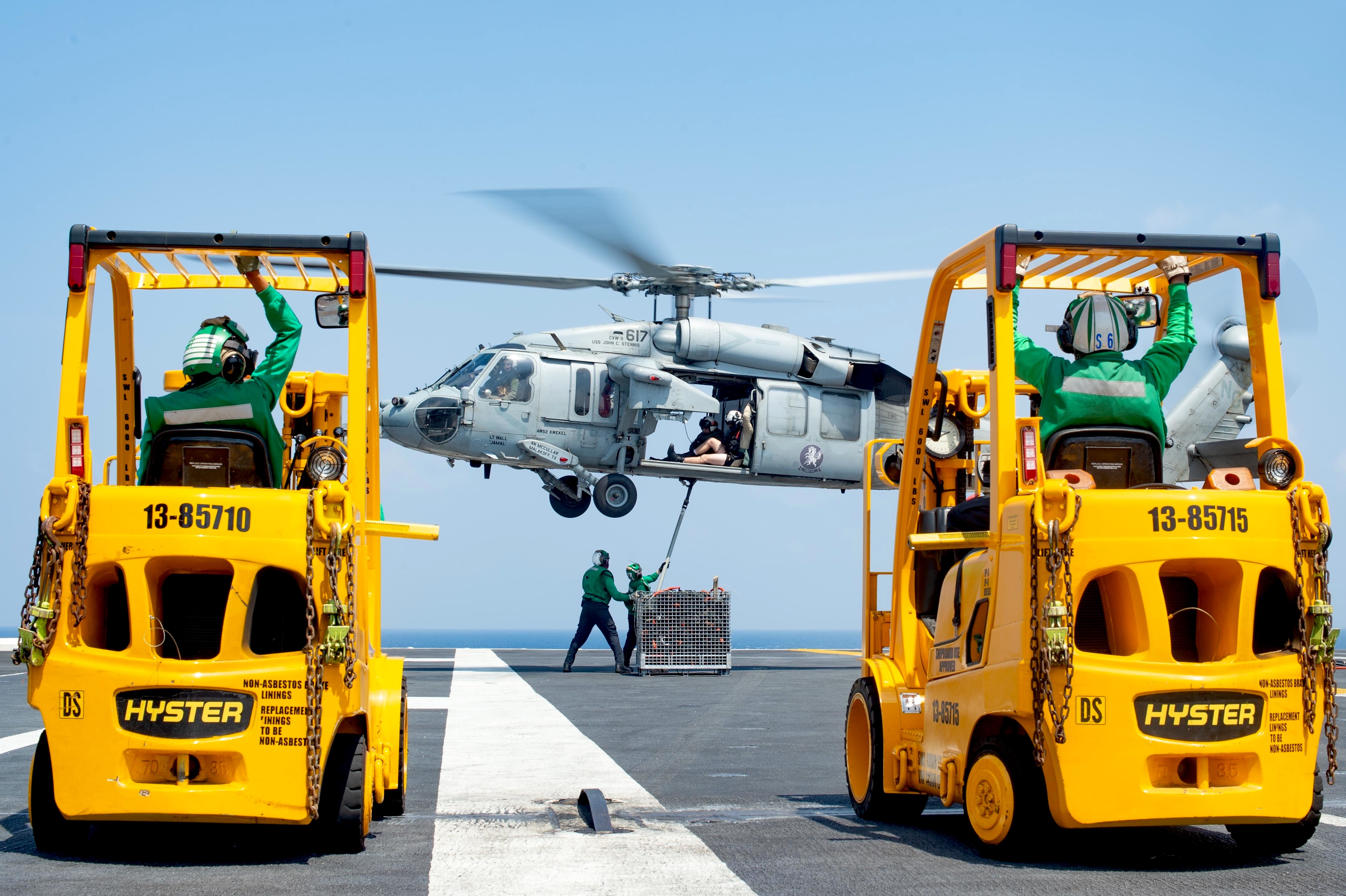 Sailors attach cargo to an MH-60S Knighthawk helicopter assigned to Helicopter Sea Combat Squadron (HSC) 14 during a vertical replenishment on the flight deck of the aircraft carrier USS John C. Stennis (CVN 74) in the Indian Ocean on March 12, 2019. US Navy Photo

The John C. Stennis Carrier Strike Group is in U.S. 5th Fleet and operating in the Arabian Sea. USS John C. Stennis (CVN-74) departed Bremerton, Wash., on Oct. 15 for the deployment that will end at the carrier’s new homeport at Naval Station Norfolk, Va. The homeport change comes ahead of the carrier’s mid-life refueling and complex overhaul in Newport News, Va. 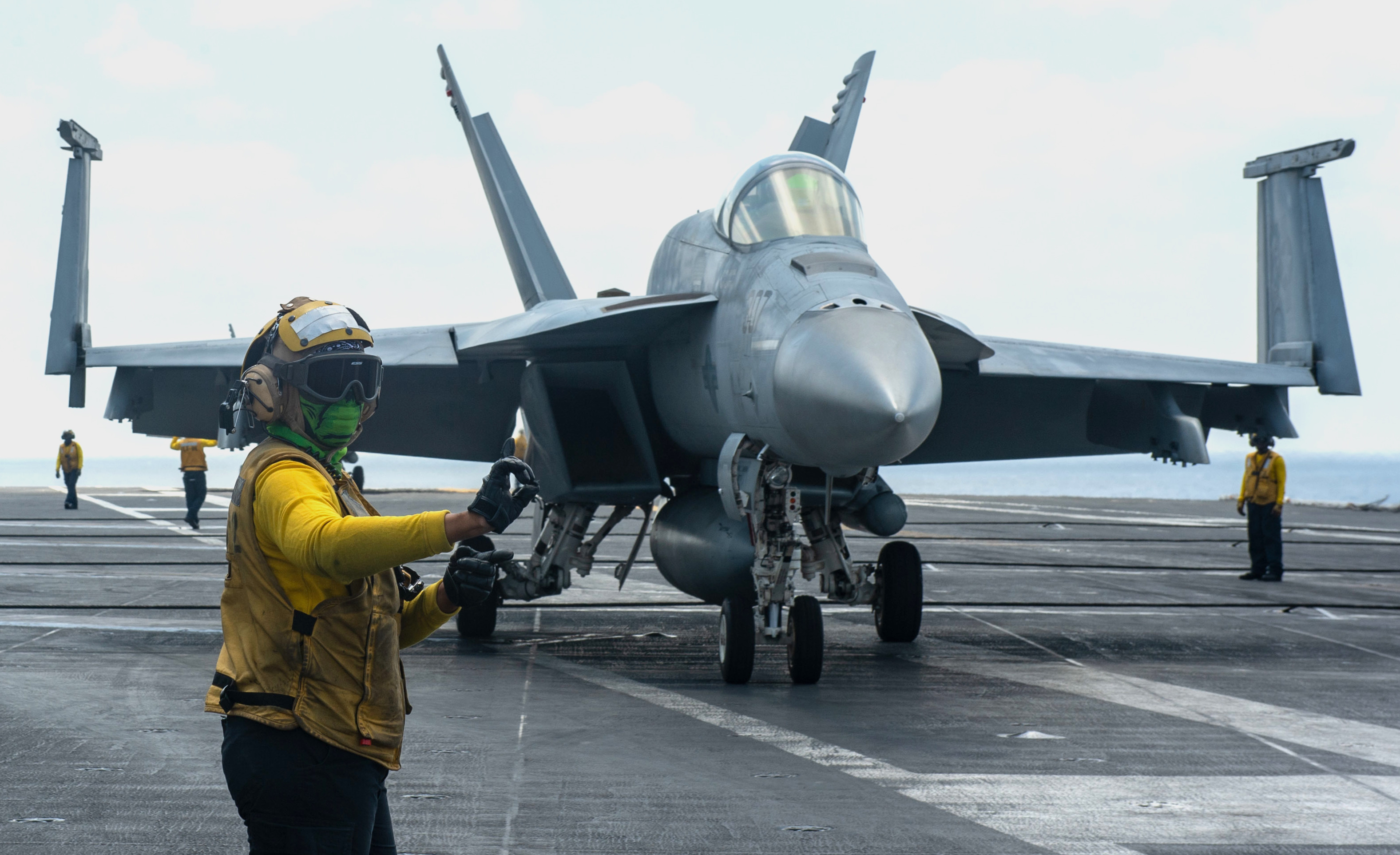 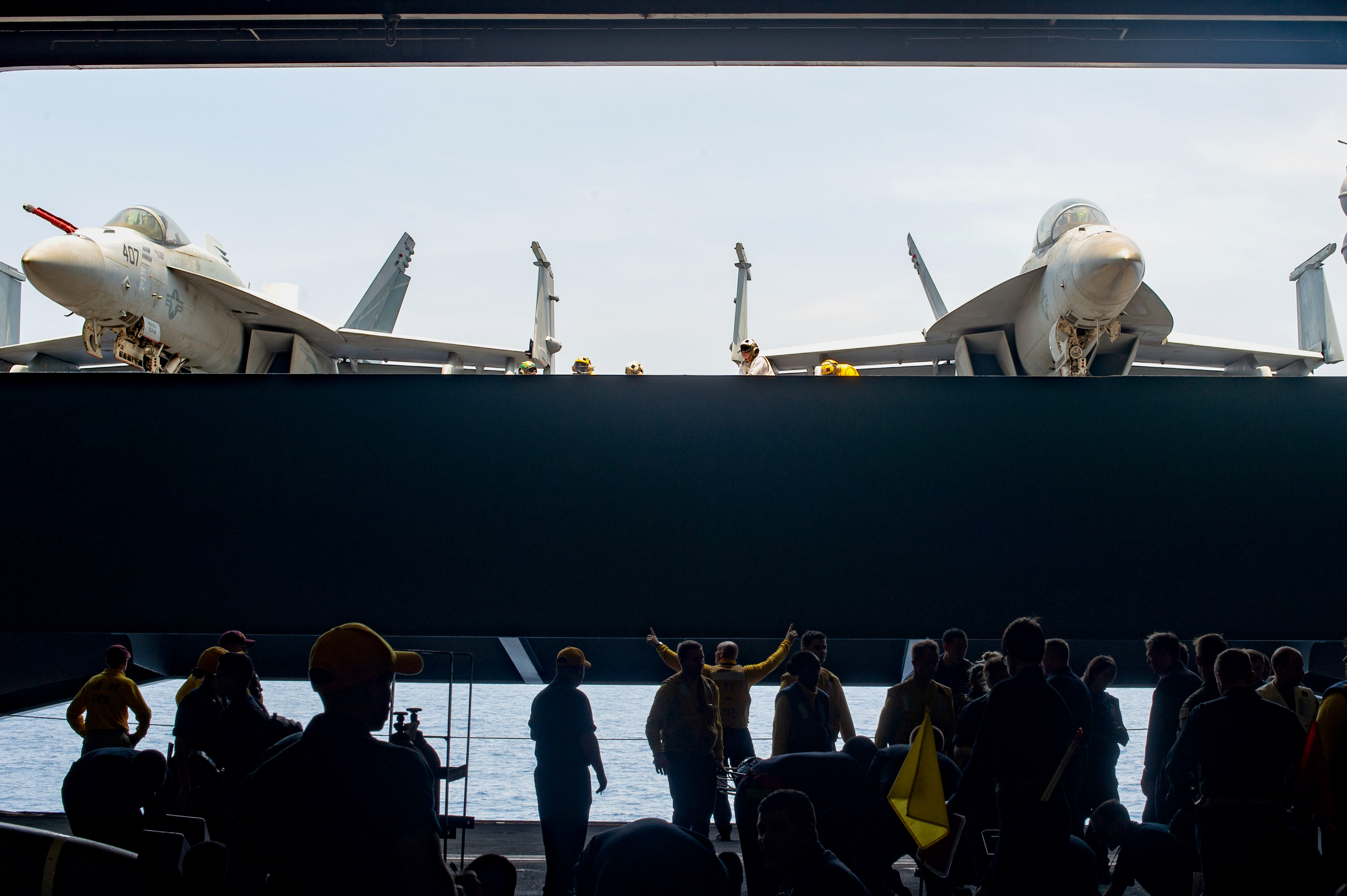 Sailors observe an aircraft elevator rise in the hangar bay during a mass casualty drill aboard the aircraft carrier USS John C. Stennis (CVN-74) in the Indian Ocean on March 12, 2019. US Navy Photo

CVW 9, based at Naval Air Station Lemoore, Calif., is embarked aboard Stennis and includes a total of nine squadrons and detachments: 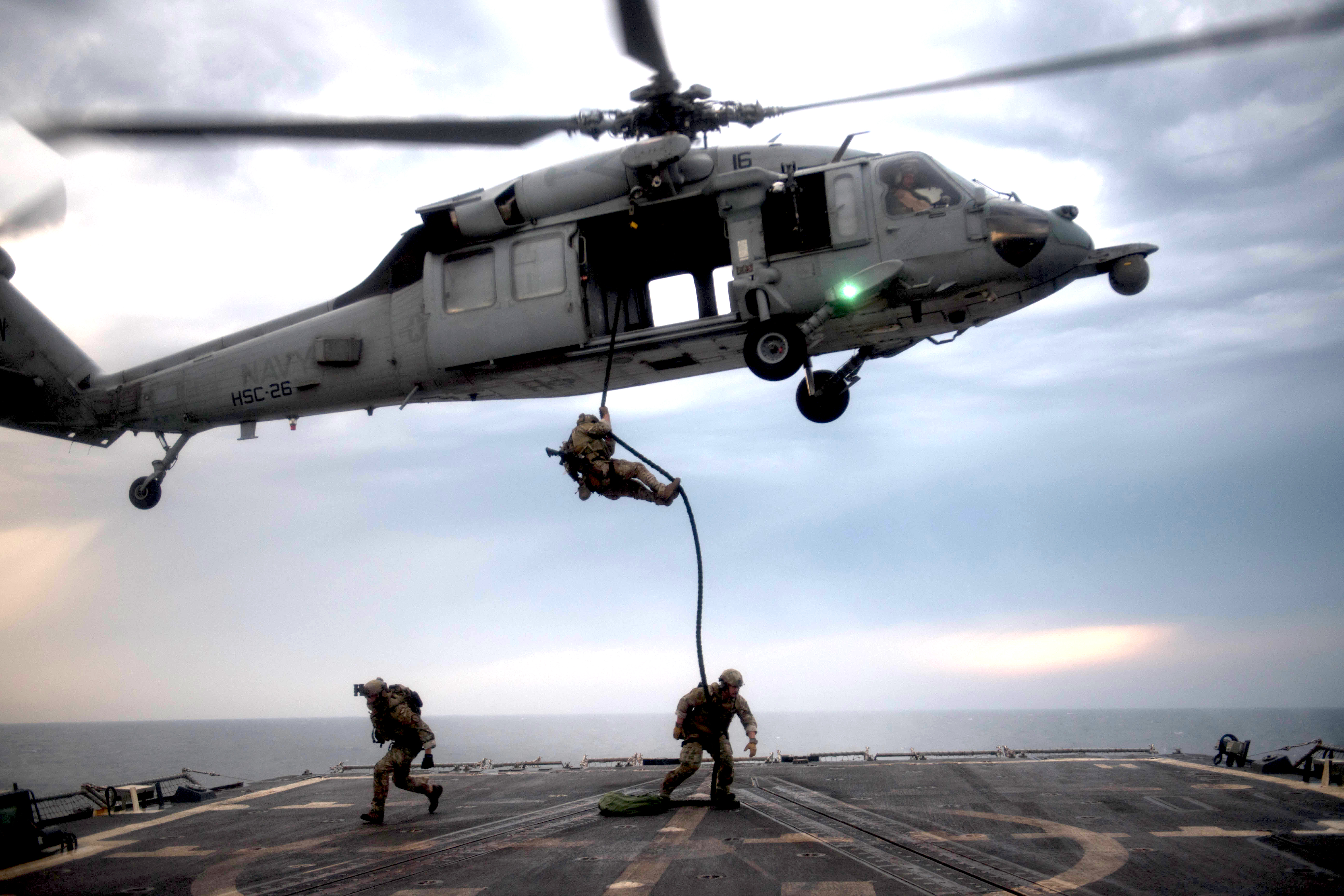 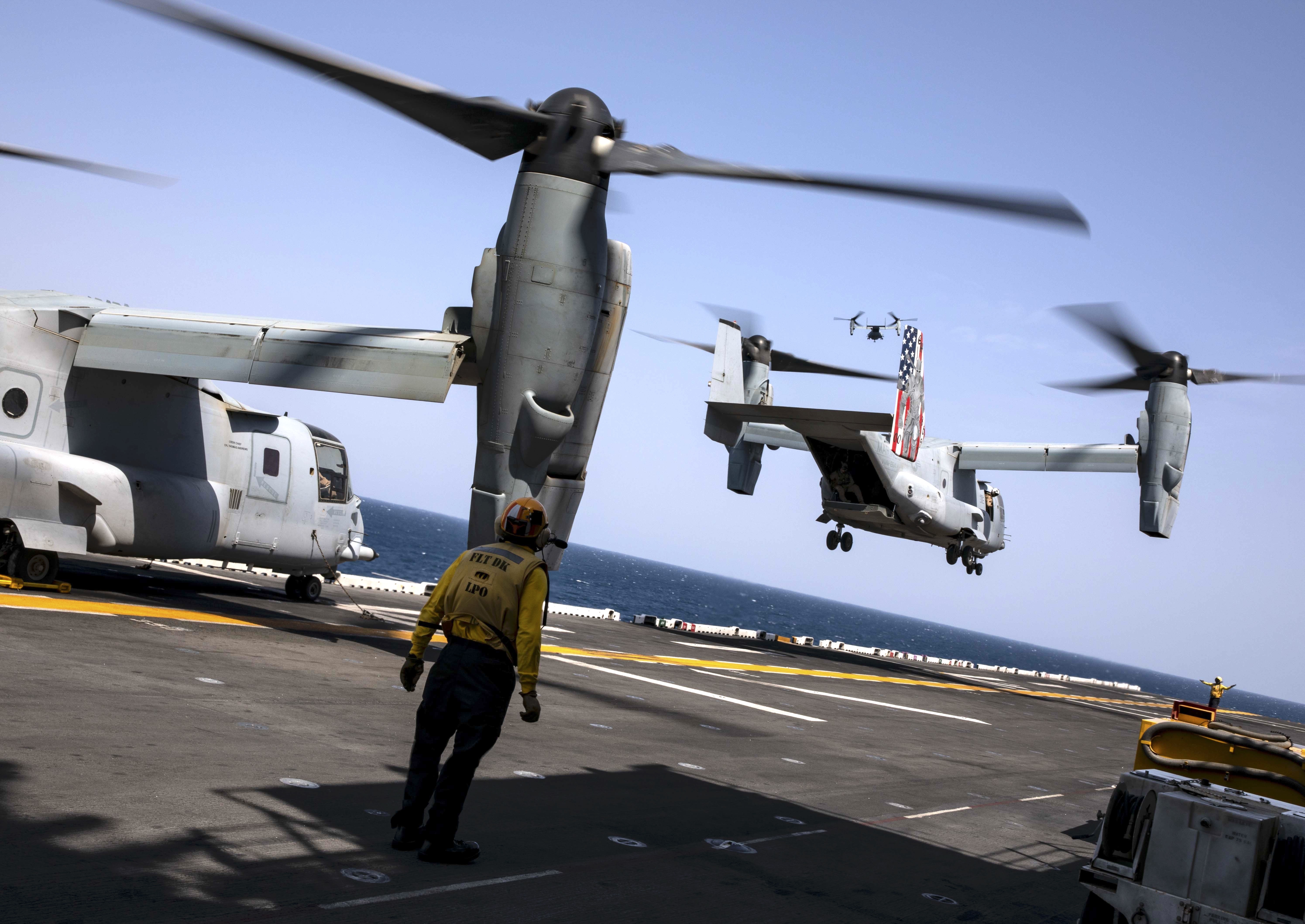 Twenty-two Ospreys with the 22nd Marine Expeditionary Unit take off from the flight deck of the Wasp-class amphibious assault ship USS Kearsarge (LHD-3) during training in the Gulf of Oman on March 13, 2019. US Navy Photo

The ARG is led by Wasp-class amphibious assault ship Kearsarge and includes amphibious transport dock USS Arlington (LPD-24) and dock landing ship USS Fort McHenry (LSD-43), according to the Navy. The more than 4,500 sailors and Marines left the East Coast on Dec. 17. The deployment will likely include operations in Europe and the Middle East. 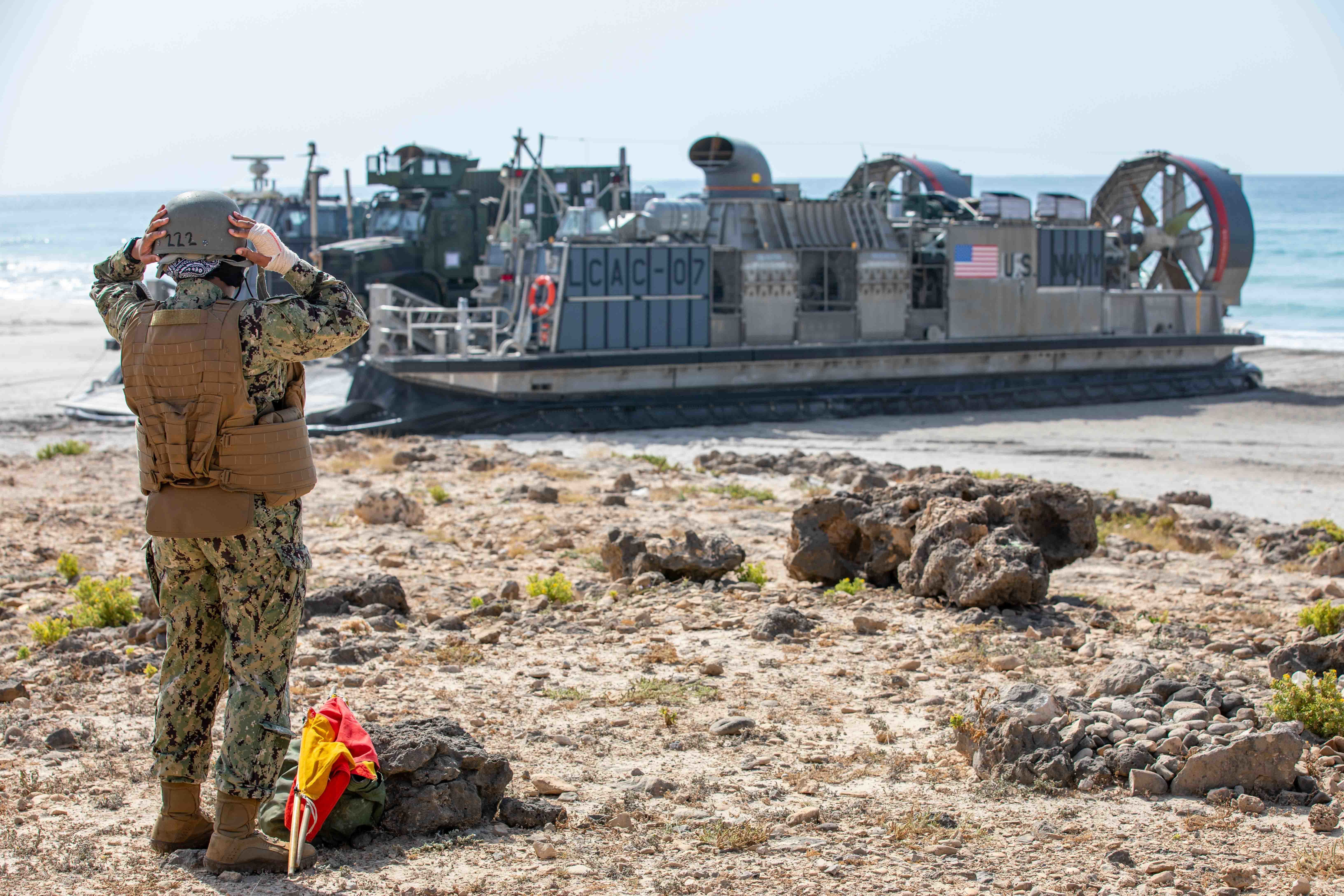 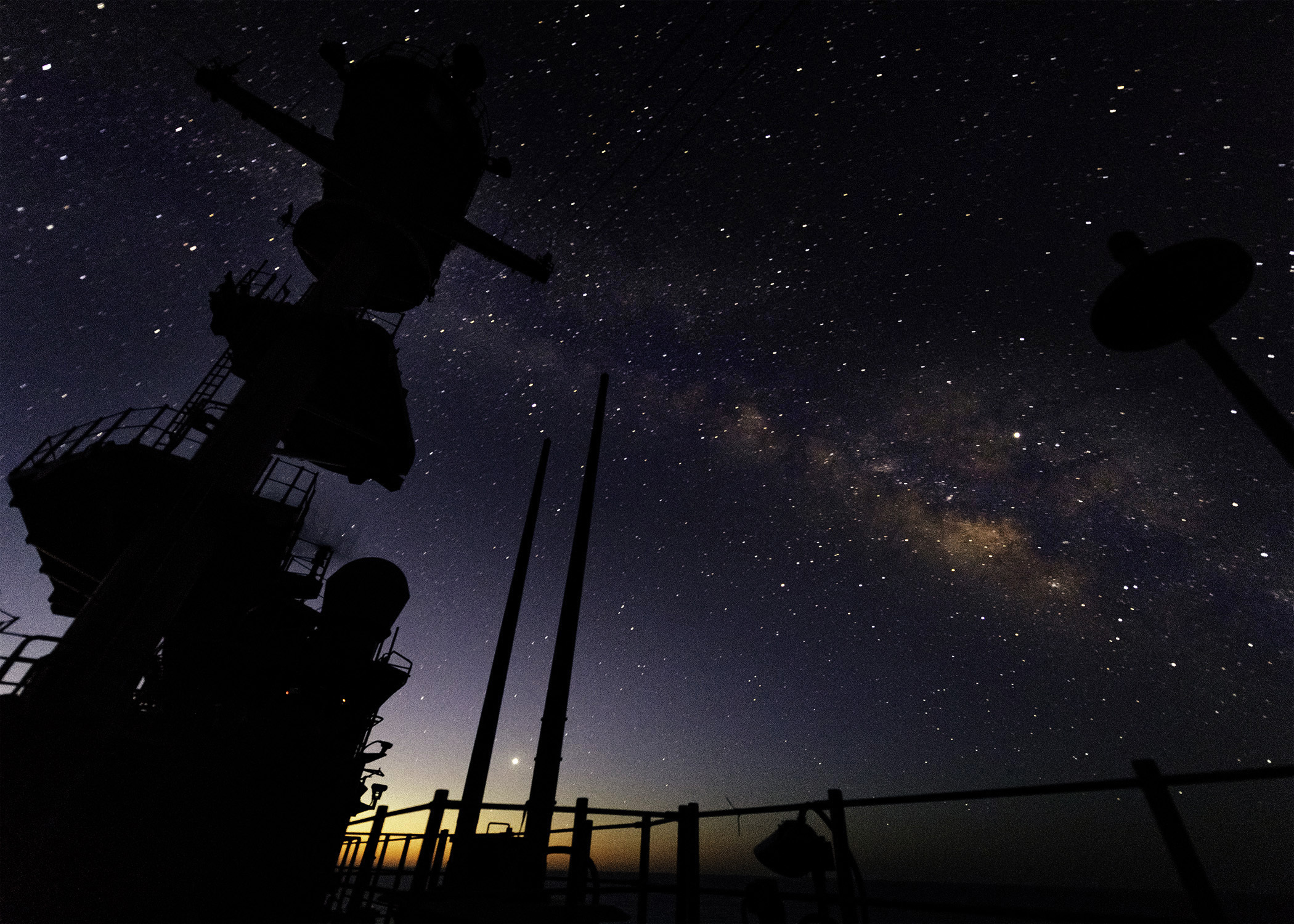 USS Boxer (LHD-4), with elements of the 11th Marine Expeditionary Unit (MEU) embarked, is underway for training in the Southern California Operating Areas. 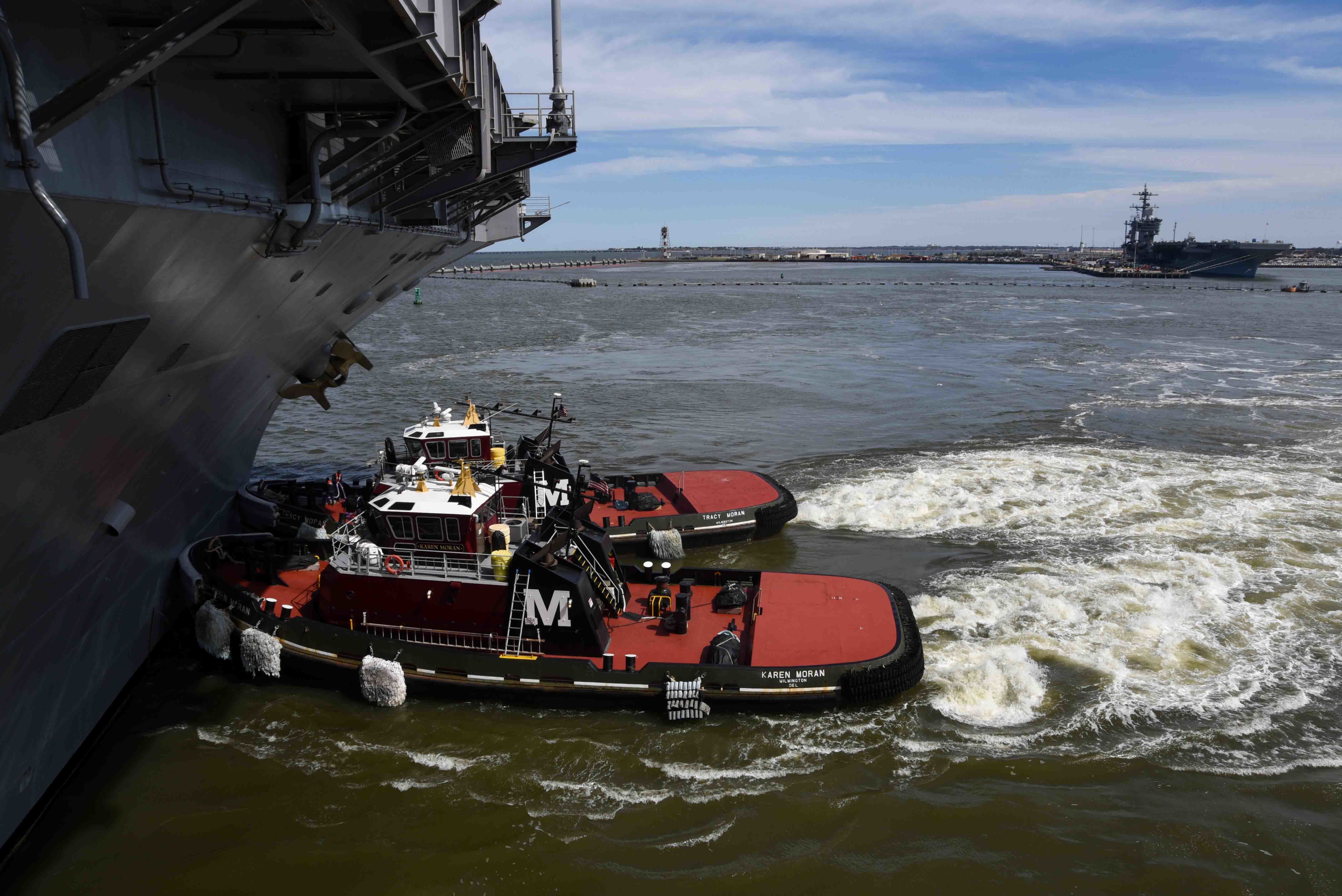 After completing a three-month maintenance period, the aircraft carrier USS Harry S Truman (CVN-75) got underway from Norfolk, VA on March 16. The ship is underway in the Virginia Capes Operating Areas conducting trials and training.