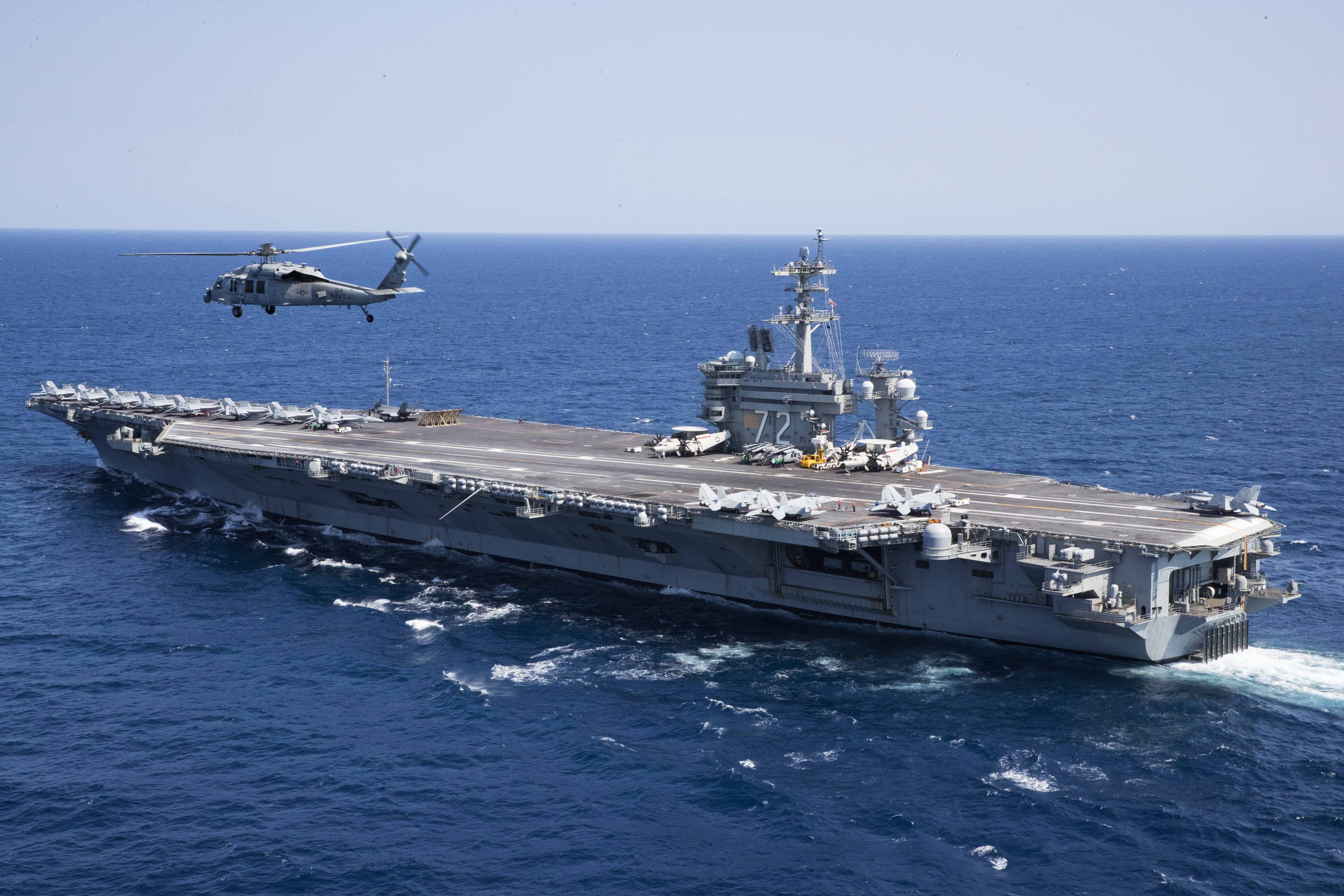 An MH-60S Sea Hawk helicopter from the Dusty Dogs of Helicopter Sea Combat Squadron (HSC) 7 prepares to land on the flight deck of the Nimitz-class aircraft carrier USS Abraham Lincoln (CVN 72) on Aug. 30, 2018. US Navy photo.

ABOARD USS ABRAHAM LINCOLN, IN THE VIRGINIA CAPES OPERATING AREA – U.S. 2nd Fleet is getting its first crack at tactical command of forces in its newly established operating area, with the newest numbered fleet overseeing the ongoing training and springtime deployment of the Abraham Lincoln Carrier Strike Group.

2nd Fleet Commander Vice Adm. Andrew Lewis and his staff are still in the process of standing up the new command, which was officially reestablished in August. But even as the standup continues, Lewis is using the Lincoln Strike Group’s current Composite Training Unit Exercise (COMPTUEX) as a first chance to start to integrate in with the trainers – specifically Carrier Strike Group 4 – and the trainees and practice what it will be like to exert tactical control over forces at sea in the 2nd Fleet area of responsibility.

Once COMPTUEX ends, Lewis will recommend to U.S. Fleet Forces Command if the Lincoln Strike Group is or is not ready for a high-end global deployment.

“I can tell you that one of the big reasons that, from a force-generation standpoint, that 2nd Fleet was reestablished was to have that numbered fleet look at” a ship’s preparedness for deployment, Lewis told reporters at Chambers Field at Naval Station Norfolk, Va.
“I’m not obligated to make anybody feel good. If I don’t think they’re meeting the mark to deploy anywhere on the globe, then I’m going to tell [Fleet Forces commander Adm. Chris] Grady that. And it’s my responsibility, and I think that’s a good check to have in place.”

Lewis said that, under the role outlined for 2nd Fleet, he’ll have tactical control of ships from the time they hit integrated training until the time they go into maintenance. Along the way he may pass control on to other fleet commanders – U.S. 6th Fleet in Europe, for example, or U.S. 5th Fleet in the Middle East – but his ability to control forces leading up to deployment and partially during deployment will put him on par with how U.S. 3rd Fleet manages the waterfront in San Diego.

“My area of interest or area of operations is in the Atlantic writ large. [6th Fleet Commander Vice Adm. Lisa Franchetti’s] is the Mediterranean, Black Sea, down in the Gulf of Guinea, and also in the Atlantic as well,” he said, noting there was no formal seam between his AOR and 6th Fleet’s.
“So if you consider Adm. [James] Foggo, as Commander of Naval Forces Europe he has two maneuver arms in the Atlantic that he can employ: 6th Fleet and 2nd Fleet. … Similarly, Adm. Grady as [commander of naval forces] under Northern Command has two maneuver arms … in the maritime homeland defense standpoint: 2nd Fleet on the East Coast and 3rd Fleet on the West Coast.”

And U.S. Pacific Fleet has two maneuver arms as well, he said, noting the forward-based U.S. 7th Fleet and the San Diego-based 3rd Fleet that sometimes controls strike groups or surface action groups on deployment to the Western Pacific.

The fact that all these major naval commanders will have two maneuver arms will allow the Navy to be more agile at the service level, Lewis said, allowing the Navy to decide who should be commanding and controlling ship groups based on their location and mission, instead of ceding that decision to the Joint Staff level.

“One thing that has changed over the last 15, 20 years is that we used to do workups, get ready to deploy, do our COMPTUEX, and then we’d deploy somewhere and go park in a little area. That’s not how we used to operate – when I was a youngster we were operating all the time off the East Coast and then sometimes you would be operating far away – but you were always moving and always doing different things. We had kind of gone away from that mindset, and so we are shifting back to operating like that,” he said, which requires more options for naval commanders and fewer formal seams to trip up the passing of command from one numbered fleet commander to another.

Though the standup of this new numbered fleet has the potential to be complicated, Lewis said he hopes those operating under him will just focus on their mission at hand. Rather than complicating the chain of command, he said he hopes to serve as “an intermediary between them and the four-star. Which I can do, and because of my approved missions, functions and tasks I can do in a way where I can help them, add value but not add a layer of bureaucracy.”

Rear Adm. John Wade, the commander of the Abraham Lincoln Carrier Strike Group and the first to deal with Lewis as a numbered fleet commander, said he hasn’t had to do his job differently in any way as a result of operating under 2nd Fleet and that COMPTUEX has served as “really just an opportunity to train to the environment that we will see on the deployment.”

“2nd Fleet really reflects our commitment for peace and security in the Atlantic, and so as they grow in capacity and increase their capabilities, their role is increasing in these exercises but also in real-world operations,” Wade told reporters aboard USS Abraham Lincoln (CVN-72).
“So they are part of this exercise, they are part of my chain of command as we execute this training, and I’m excited about working with Adm. Lewis and his team but also gaining the benefit of operating under a three-star fleet commander as we conduct our operations.”