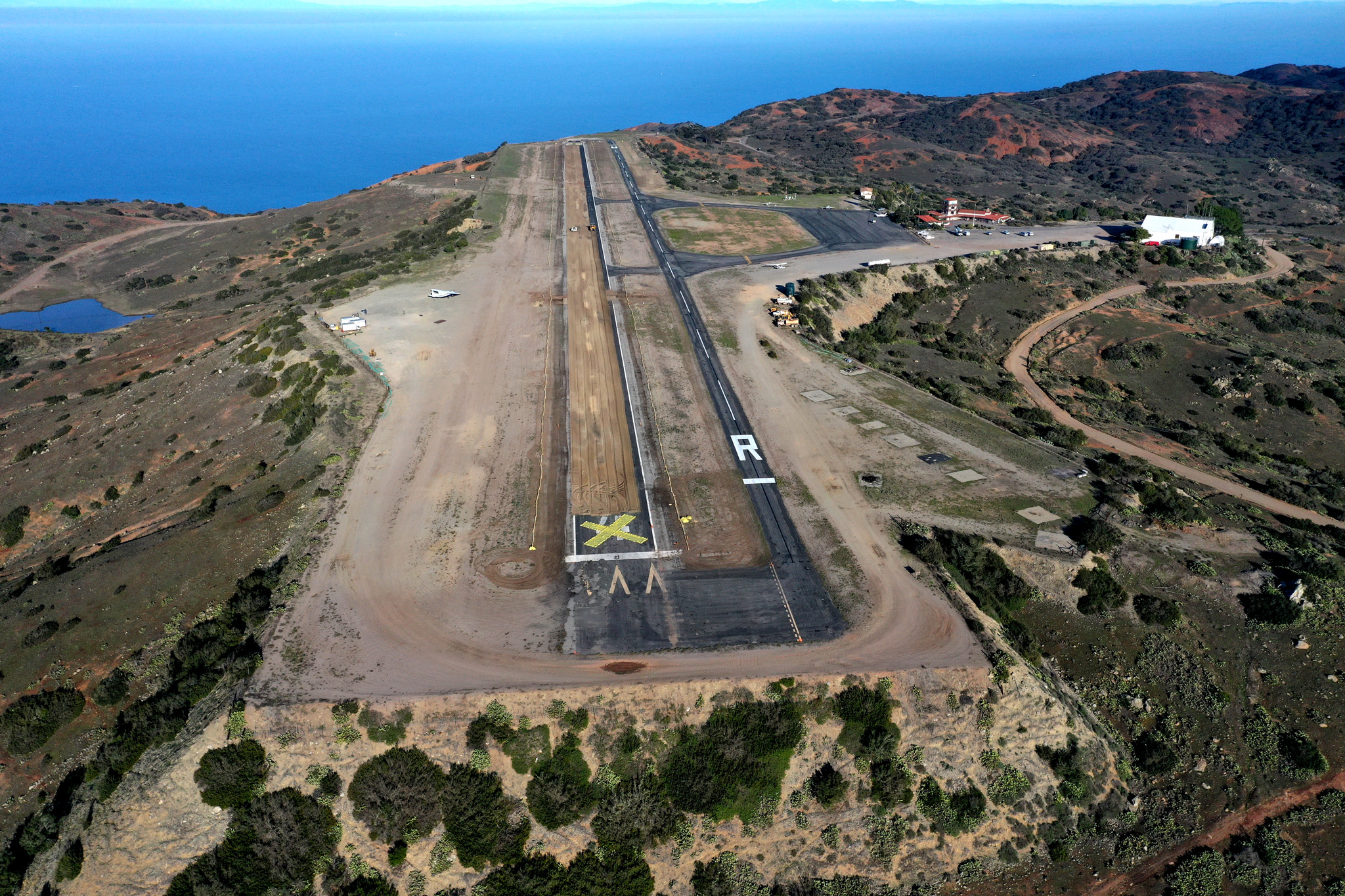 Catalina Runway 4/22, with the runway mostly cleared of the old asphalt. The existing taxiway (right) will be used as the temporary runway for limited flights until mid-April, when the new concrete runway built by Marines is expected to receive its first flight. Runway Photo by Glen Gustafson, courtesy of the Catalina Island Conservancy

This post has been updated to clarify comments from Cynthia Fogg on the role of the Navy’s Seabees in the process of rebuilding the runway.

Starting this month, members of Marine Wing Support Squadron 373 will rotate to the island in groups from Miramar Marine Corps Air Station, Calif., to redo the runway through the Defense Department’s “Innovative Readiness Training” program, officials said. The old, asphalt runway on the island some 50 miles west of Camp Pendleton has been in “fair” condition, with “potholes and loose pavement fragments,” according to the aviation enthusiast website AirNav.

While MWSS-373 Marines can patch up damaged runways – like they did during a recent deployment to Iraq – the airport project on Catalina will test their skills on a whole new level.

“This is a very large, very deliberate project,” Lt. Col. James Bauch, the squadron’s commander, told USNI News. “The work that we did in Iraq was more patches to pieces of runway,” with largest sections covering 20-feet by 20-feet. Marines used quick-setting concrete mix mixed by hand in buckets to repair the holes and cracks, Bauch said.

But bucket brigades won’t work on Catalina. The 3,000-foot-long by 75-foot-wide runway will require enough high-quality concrete to cover an area more than five acres in size and four inches deep. Instead of handling heavy bags of quick-setting powder, Marines will work with concrete from trucks hauling loads from one of the island’s concrete plants.

So the Catalina project is far larger in scope than rapid runway repair work Marines typically do and more akin to larger-scale runway repair and airfield construction done by Seabees and “RED HORSE” heavy-construction squadrons with the Air Force and Air National Guard. “This is definitely on the other end of the spectrum from what we traditionally have trained for,” Bauch said.

To prepare for the project, Marines built two concrete pads in training areas at East Miramar, including a small project at the San Diego County Sheriff’s Department pistol range. Several Seabees with Naval Construction Group 1 and Naval Mobile Construction Battalion 25 from Port Hueneme helped Marines learn the ins-and-outs of working with concrete and rebar, he said. About 120 Marines and some Seabees will work on the project at any given time.

Starting by mid-January, Marines will start pouring concrete, work that will stretch three months. “Once the concrete starts coming in, I think, we’ll be off to the races,” said Bauch. By rotating groups of Marines to Catalina, “we maximize the experience and really take advantage of this opportunity to create a really broad group of Marines who have significant expertise in concrete.”

The Catalina Island Conservancy, which owns the airport, tapped IRT in early 2017 to help rebuild the nearly 80-year-old runway. Officials didn’t expect to work with Marines.

“We actually were thinking about the Seabees, because we had heard the Seabees do this type of work,” said Cynthia Fogg, the Conservancy’s government liaison and assistant to the president and board. Referrals took them to Port Hueneme, home to West Coast Seabees, and Camp Pendleton, home of I Marine Expeditionary Force. I MEF and the 3rd Marine Aircraft Wing assigned the Catalina project to MWSS-373 to rebuild the runway, along with input from Naval Construction Group 1, 1st Naval Construction Regiment and Navy Mobile Construction Battalion 25, Fogg said.

The Conservancy is spending about $4 million for the project that’s valued at $5 million, factoring in the Marines’ labor, said Tony Budrovich, president and CEO of the Catalina Island Conservancy. Budrovich praised the public-private partnership. “It’s amazing how strategically valuable building an airport was for the Marines, and how strategically valuable replacing an airport runway was for us,” he said. The airport sees about 7,500 landings annually.

The airport’s smaller taxiway remains open for limited flights until the new runway reopens sometime in April. In mid-December, a local contractor ripped up the runway, pulverizing the asphalt so Marines can compact it as the base for the new concrete once they arrive on island.

Catalina, said Bauch, is “the most unusual place that we’ve gone to.”

A century ago, Chicago chewing gum magnate William Wrigley, Jr., and his family owned Santa Catalina Island Co. and were the island’s major landowners. The island for several years hosted the Chicago Cubs’ spring-training. The airport was built in 1941, and the military used the island for training during World War II. “A lot of the roads, the infrastructure, was built by the Army Corps back in the ’40s,” Bauch said. In 1972, the Wrigleys helped create the Catalina Island Conservancy, a private land trust owning 90 percent of the island. The Conservancy controls most activity on the island, which has about 4,000 full-time residents. 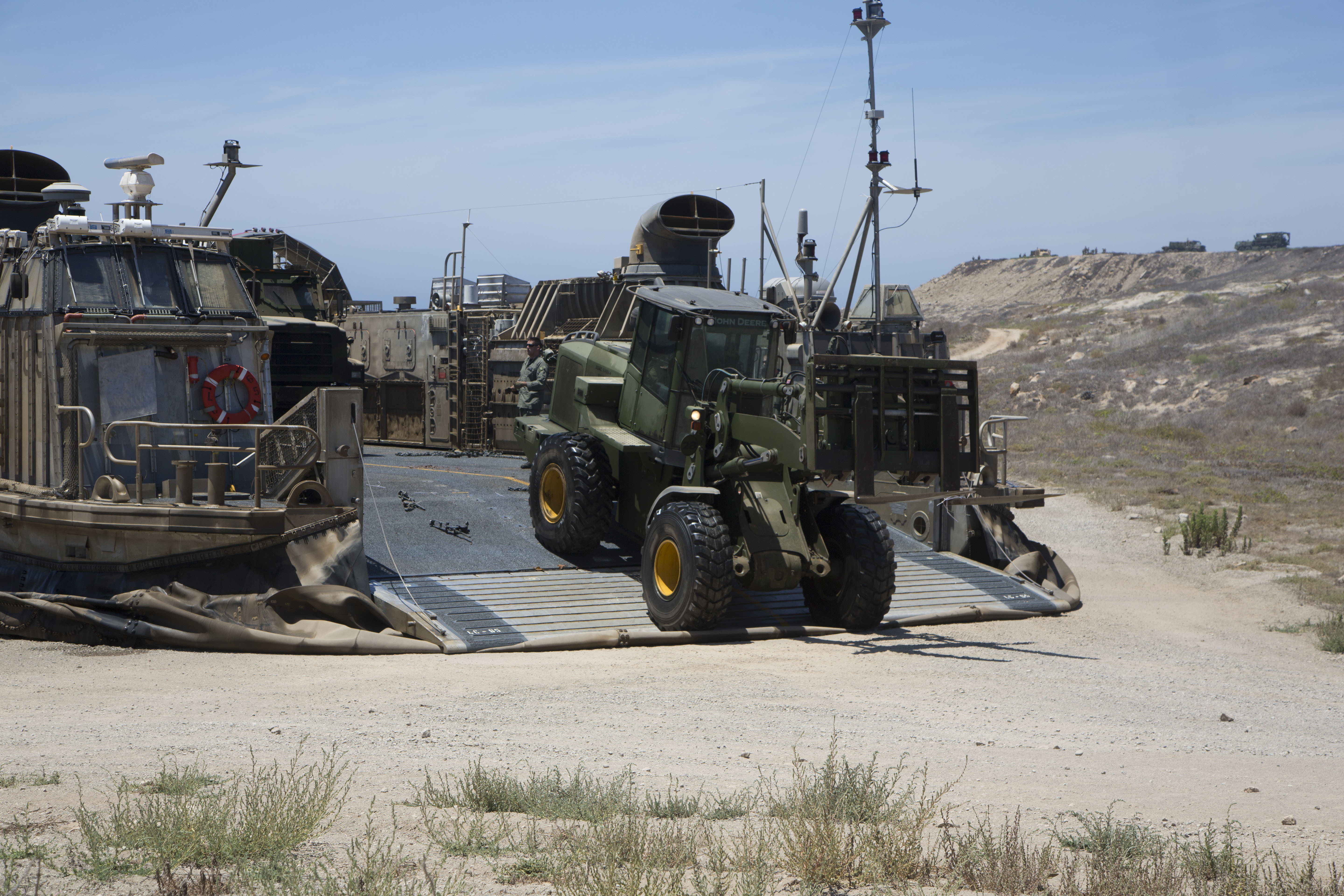 The privately run Catalina Airport, nicknamed “Airport-in-the-Sky,” is unusual for its location. It sits at 1,602 feet elevation, at the edge of a cliff. Its Runway 4/22 has a hump in the middle to help slow the speed of Wrigley’s DC-3 airplanes. Novice pilots find landing there akin to setting down “on an aircraft carrier that is 1,602′ in the air,” warns the airport’s website.

Ferries and boats, along with ships and barges, move most people, food, equipment, supplies and mail to the island, so a quick trip for last-minute supplies doesn’t happen. “There’s no Home Depot on our island,” Budrovich said, “so you’ve got to learn how to do a project like you’re in the middle of a foreign country.”

The airport’s location and island’s rugged terrain challenged MWSS-373 as it drafted up a plan to get equipment to the island. Capt. Christopher Flood, a logistics officer, weighed the options: Contracted barges or Navy shipping using air-cushioned landing crafts (LCACs). The barge option was chosen, as it required fewer environmental hurdles and is how the Conservancy moves heavy freight, he said. Another challenge came in moving heavy construction equipment along winding, narrow roads from the offload spot at Two Harbors, a tiny town at the island’s neck.

Three barges loaded up the squadron’s equipment and supplies in San Pedro, Calif. Several days before Christmas, Marines finished the offload at Cat Harbor and transported the gear 13 miles to the airport. The equipment included graders, compactors, scrapers, 7-ton transport trucks and 84 pallets of meals-ready-to-eat and unitized group rations. The squadron will set up an expeditionary camp at the airport, with large BASE-X tents and a field mess and medical section. The Conservancy is providing an empty hangar and trailers for the Marines to use for maintenance and support. Marines will buy perishable foods locally and tap into the local water supply.

With the first phase completed before Christmas, Marines will arrive by helicopters and start work in early January, Flood said. They’ll do final land surveys, check the grade and compact the ground, and they’ll work in phases to build the forms, lay the rebar and pour the concrete that will daily by trucks. It’ll take 30 days for the concrete to cure.

Once the runway work is done, the Marines will begin pre-deployment training in April, ahead of a scheduled squadron deployment later this year. “Looking at the world we are in, it’s hard to say what we’ll have to go and do,” Bauch said, noting military operations from hurricane disaster relief to Iraq operations that Marines have been called on to do. “You’ll never know who’s going to be standing on a concrete runway that has to be fixed,” he said. “RED HORSE might not be around. Seabees might not be around. The Marines are going to have to rise to the occasion.”

“Our general says, fix-fight-fly,” he added. “We can’t have an excuse not to be able to do that if we had a training opportunity to be able to ensure that and make it happen.”