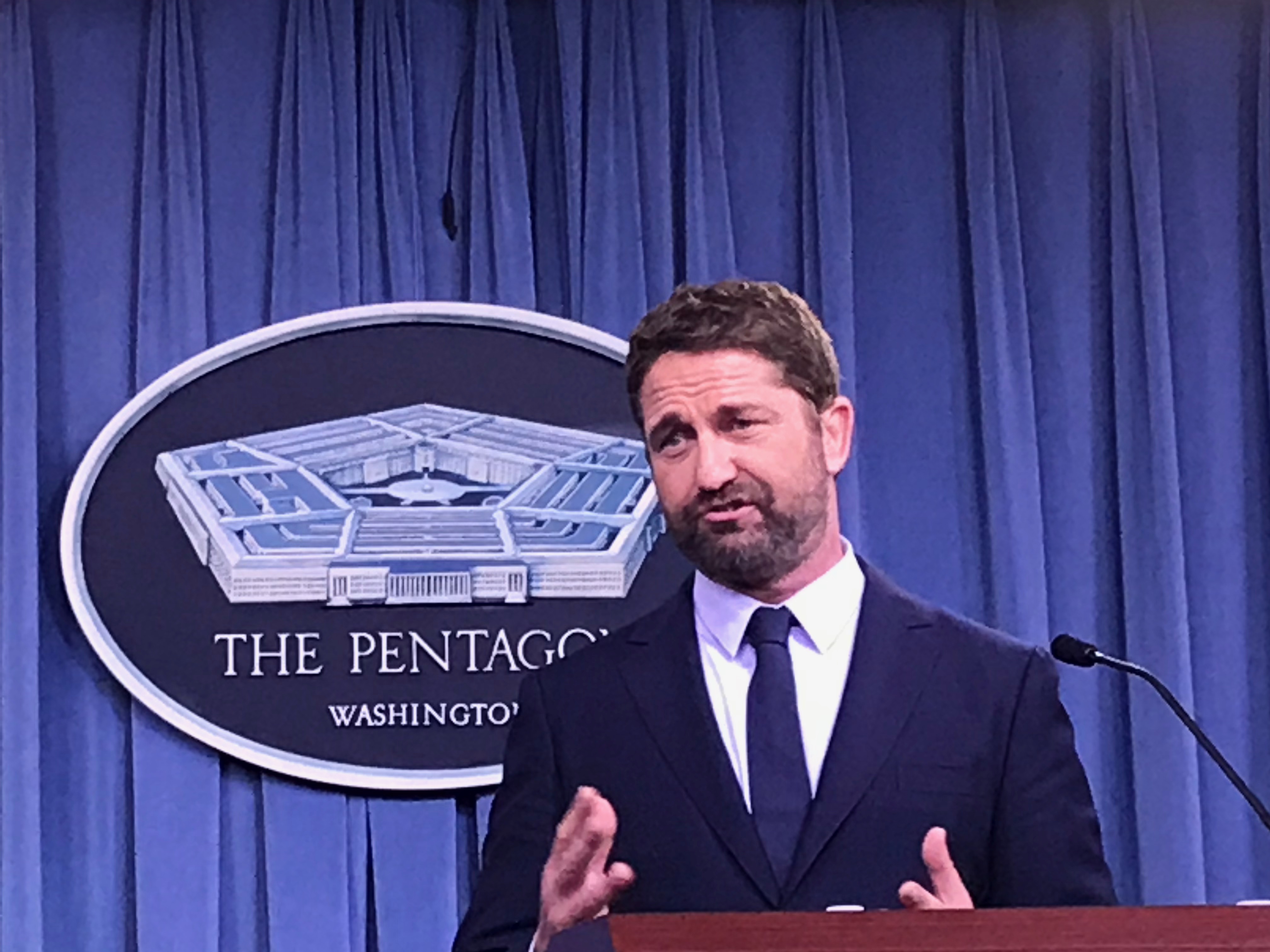 THE PENTAGON — The Navy hopes recruiting gets a boost from the story of an attack boat captain and crew staving-off apocalyptic disaster in Hunter Killer while the movie’s star, Gerard Butler, says his goal is breathing new life into the submarine movie genre.

For a filmmaker, a submarine provides a terrific backdrop for filming conflict than the isolated confines of a submarine, Butler told the Pentagon press corps during a Monday media briefing. Butler also is one of the film’s producers.

“A lot of my favorite movies before this movie were submarine movies,” Butler said. “I feel like there’s no better place in our universes to put high stakes, ultra-suspenseful drama in a small room a 1,000-feet under the ocean with all the risks adherent to that.”

Butler has long been a fan of such films as Run Silent, Run Deep, The Enemy Below and The Hunt for Red October. The German-made Das Boot is “probably my one of my favorite movies of all-time,” Butler said.

“You’re grabbing the edge of your seat the whole time, and you’re so with these warriors as they make these decisions and face some of their darkest moments they will, and they have to dig deep and really call on their brawn, and so we felt we could do that with this movie,” Butler said. “You can have fun with the gadgetry, the weapons systems, the platforms, but at the end of the day, it’s about the people operating them and how they have to think creatively and innovatively and courageously, and how they have to hold onto that kind of bedrock of steadiness and honor in the most incredibly tense dangerous situations.”

What Butler described as being a compelling story arc for a movie is often echoed by Navy officials pitching the careers in the service.

The hope is showing off the silent service won’t just attract young men and women to serve in the submarine community, but also encourage young people to learn more about the Navy, Vice Adm. Fritz Roegge, the former commander of U.S. submarine forces in the Pacific, said on Monday. Roegge is currently the president of the National Defense University.

“We’re competing for talent, and in this dynamic economy it’s more important than ever that we find ways to inspire the next generation of warfighters to consider serving in the Navy,” Roegge said. “Movies are proven to be good venues to reach Americans who would otherwise not have exposure to our great Navy.” 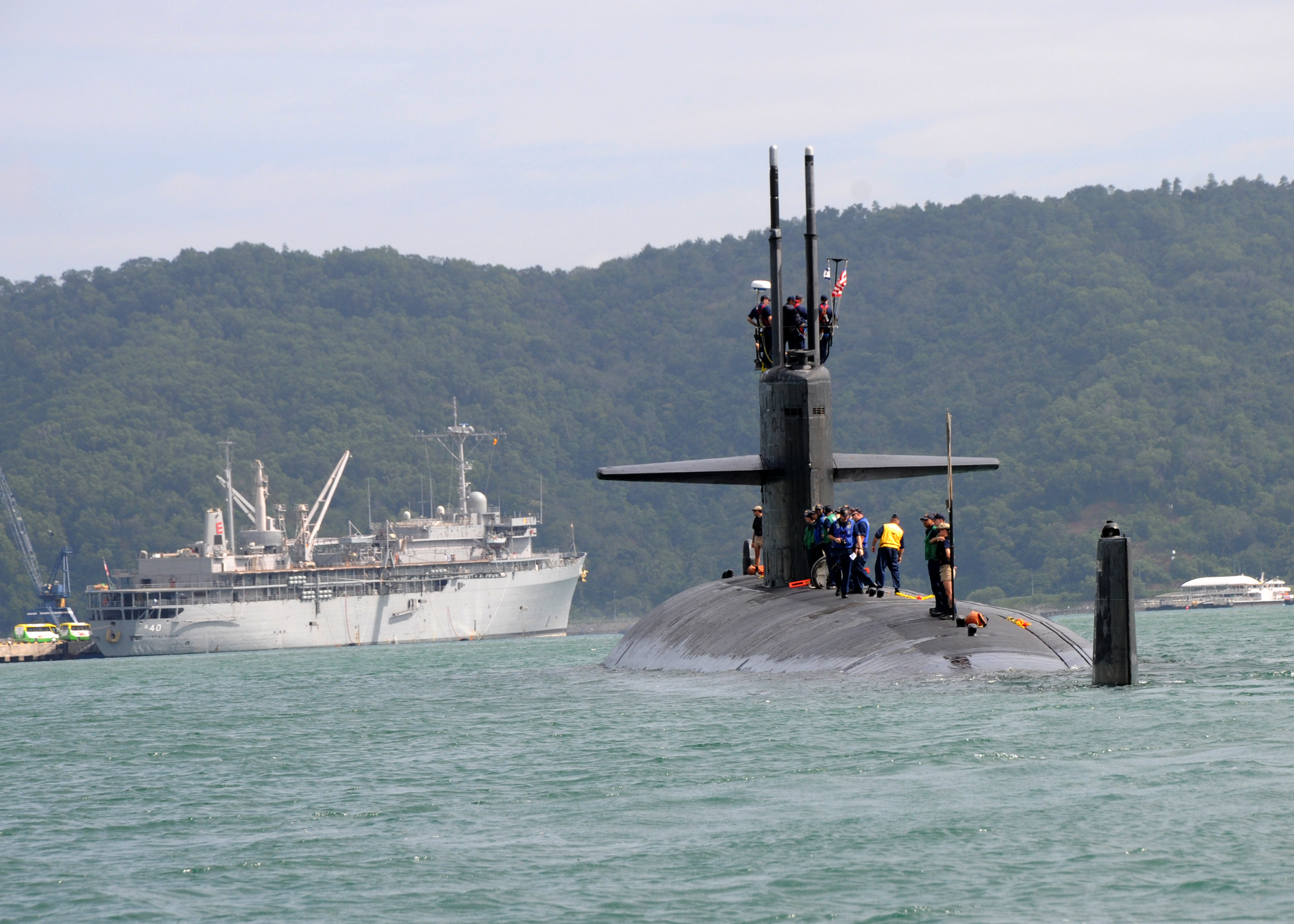 While in the Pacific, Roegge hosted Butler in Hawaii, offering his staff to provide technical assistance and guidance. The Navy agreed to work with Butler’s crew, at no cost to the taxpayers, to show “who we are, what we do and why it matters,” Roegge said.

On land, Butler insisted on immersing himself in any training exercises available. One example he cited was working in what’s called the wet trainer, where a series of pipes filled with cold water is designed to burst. Sailors are supposed to solve the leaks before water fills the space.

“When I stepped in, I thought this is a bad idea,” Butler said. “I still think it was.”

“Once we were submerged, we were down for three days,” Butler said. “We drilled all sequences we would do in the movie.”

In some instances, the experience of being on the submarine changed how the filming, Butler said. During the first deep-dive, he mentioned how while standing, everyone reflexively leaned back, further and further as the submarine descended. Butler decided for filming to use a hydraulic system to raise, lower and shift side-to-side the entire 17-ton submarine bridge set to mimic what occurs as a sub moves through the water.

“The set would move, so we didn’t have to do the ‘Star Trek’ thing,” Butler said, mimicking how actors on the original 1960s television series would tilt their bodies to imply side-to-side or up-and-down motion.

When asked about what he learned from the experience of acting and producing the film, which he’d been working on since first reading the script in 2011, Butler described a sense of awe over how the submarine community operates.

“When you’re actually on a sub, you realize the dangers because you’re there, and you’re 1,000 feet underwater, and you go OK, what are different ways things can go wrong,” Butler said. “And once you climb into the reality of that, it’s actually quite scary, and you have all the greater appreciation of what these people do every day, unsung and unseen.”