The following is the Aug. 6, 2018 Congressional Research Service Report, Iran’s Threats, the Strait of Hormuz, and Oil Markets: In Brief.

The exchanges of threats between members of the governments of Iran and the United States, including the presidents of both countries, have again raised the specter of an interruption of shipping through the Strait of Hormuz (the Strait), a key waterway for the transit of oil and natural gas to world markets. In the first half of 2018, approximately 18 million barrels per day (bpd) of crude oil and condensate, almost 4 million bpd of petroleum products, and over 300 million cubic meters per day in liquefied natural gas (LNG) exited the Strait. Iran accounted for about 10% of oil and 0% of the natural gas through the Strait. In a speech on July 22, Iranian President Rouhani stated, “We are the…guarantor of security of the waterway of the region throughout the history. Don’t play with the lion’s tail; you will regret it.” 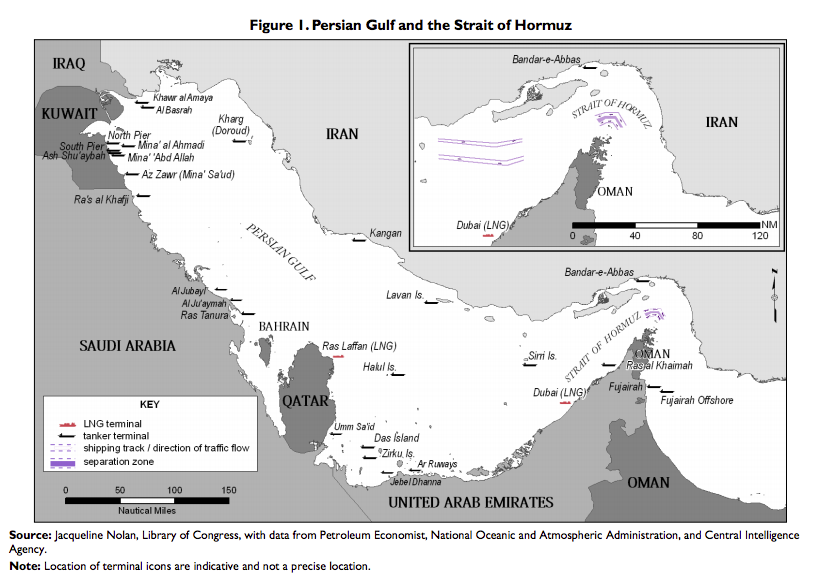 (Western reporting took the reference to the waterway to mean the Strait of Hormuz, which is the narrow waterway that forms the entrance to the Persian Gulf from the Gulf of Oman and ultimately the Arabian Sea. See Figure 1). To which President Trump tweeted, “NEVER, EVER, THREATEN THE UNITED STATES AGAIN OR YOU WILL SUFFER CONSEQUENCES THE LIKES OF WHICH FEW THROUGHOUT HISTORY HAVE EVER SUFFERED BEFORE…” Earlier, on July 3, President Rouhani stated, “The Americans have claimed they want to completely stop Iran’s oil exports. They don’t understand the meaning of this statement, because it has no meaning for Iranian oil not to be exported, while the region’s oil is exported.”

With the U.S. withdrawal from the Joint Comprehensive Plan of Action (JCPOA) on May 8, 2018, there may be increased potential for Congress to consider legislation regarding sanctions on Iran. A number of bills, mostly prior to the May 8 withdrawal, have been introduced in the 115th Congress targeting aspects of Iran’s leadership, military, and economy.