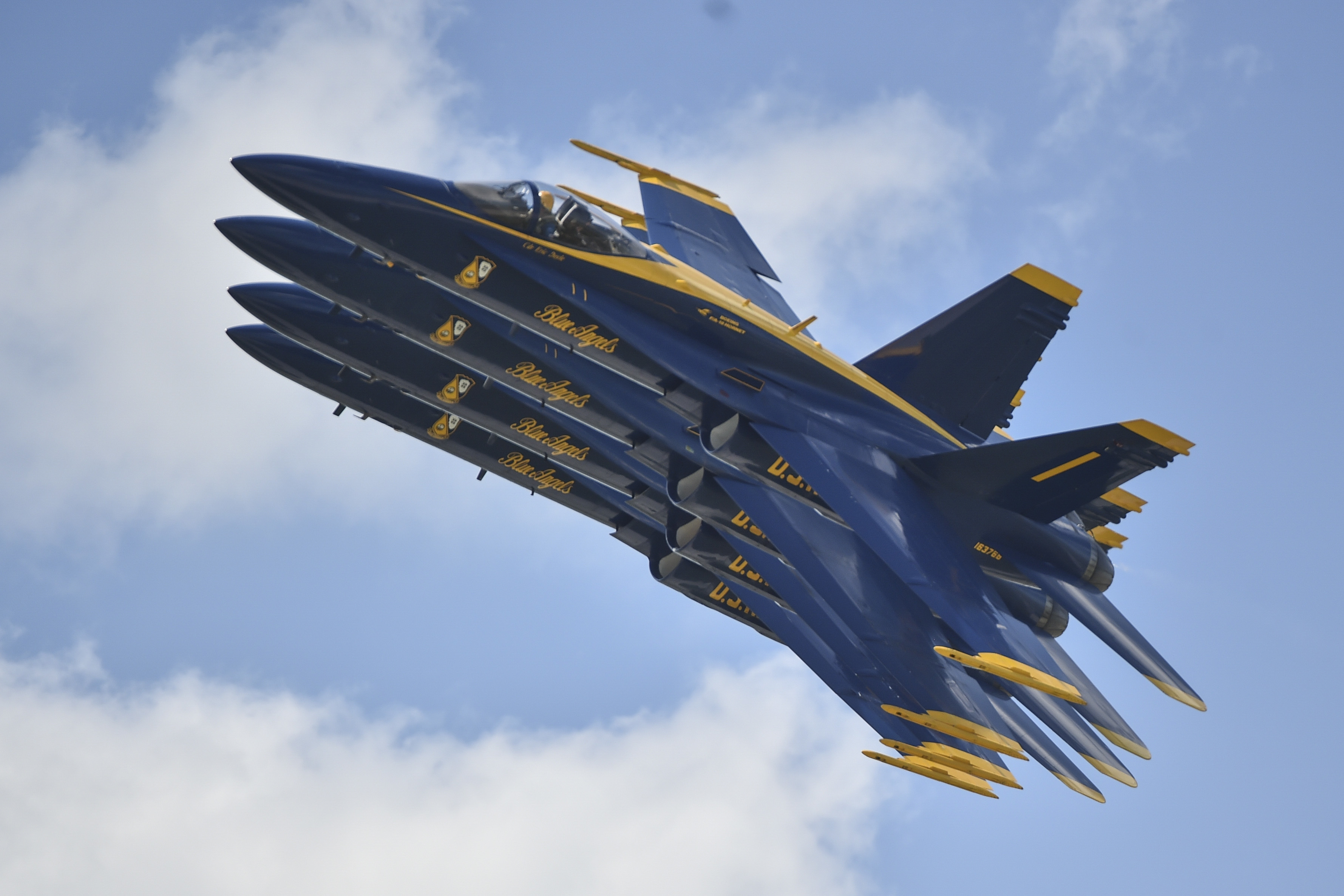 The US Navy flight demonstration squadron, the Blue Angels, perform during the Vectren Dayton Air Show in Dayton, Ohio on June 23, 2018. US Navy Photo

The work will convert the operational Super Hornets with the equipment and tweaks required for aircraft to be used by the demonstration team.

Among the differences between the fighters flown by the Blue Angels and those deployed to the fleet are Blue Angels F/A-18s have their nose cannons removed and replaced with smoke-oil tanks. Old paint is stripped off and the fighters are painted in the distinct blue and gold livery. A civilian instrumentation landing system is put in each plane and each cockpit has a spring installed on the stick to maintain a constant seven pounds of forward pressure to enable improved formation and inverted flying.

“Otherwise, the aircraft that the squadron flies are the same as those in the fleet,” according to the Blue Angels fact sheet. “Each Blue Angel aircraft is capable of being returned to combat duty aboard an aircraft carrier within 72 hours.”

The upgrades needed to turn a ready-for-combat duty Super Hornet into an elite flight demonstration aircraft, though, are not so simple as plugging in some extra components, USNI News understands.

F/A-18 E/F versions do not have a lot of extra space, so finding a place for the smoke system has proved to be a daunting task. The legacy smoke system didn’t quite fit into a Super Hornet nose. In 2016, under a $12 million engineering and design contract, Navy and Boeing engineers started working on solving this issue and others related to reconfiguring the cockpit and installing inverted flight systems, according to Boeing.

The Blue Angels’ Super Hornets will be retrofitted at Boeing’s St. Louis facility and is expected to be completed by December 2021, according to the Department of Defense contract announcement.

This will be the 11th airframe change for the demonstration team since its founding in 1946. The team transitioned to the F/A-18A/B model on the Blue Angel’s 40th anniversary in 1986 from the Douglas A-4F Skyhawk II.

The following is the full Department of Defense contract announcement:

The Boeing Co., St. Louis, Missouri, is being awarded $17,002,107 for firm-fixed-price delivery order N0001918F2654 against a previously issued basic ordering agreement (N00019-16-G-0001). This order is for the retrofit documentation and kits to convert nine F/A-18E and two F/A-18F aircraft into a Blue Angel configuration in accordance with engineering change proposal 6480. Work will be performed in St. Louis, Missouri, and is expected to be completed in December 2021. Fiscal 2018 aircraft procurement (Navy) funds in the amount of $17,002,107 will be obligated at time of award, none of which will expire at the end of the current fiscal year. The Naval Air Systems Command, Patuxent River, Maryland, is the contracting activity.