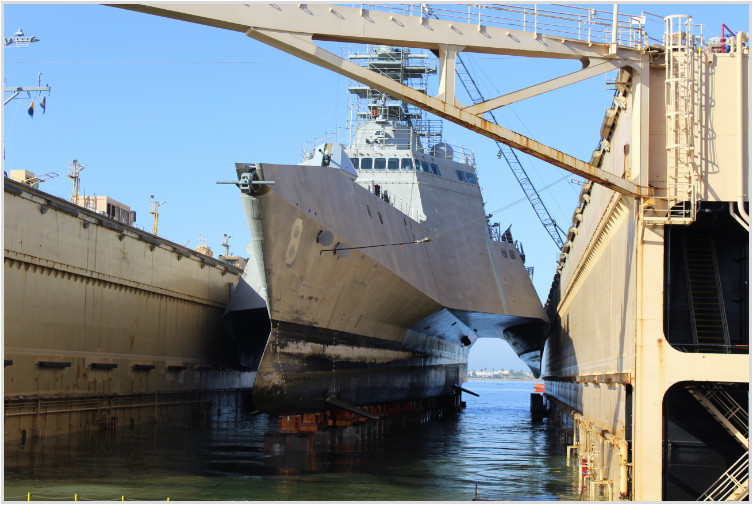 WASHINGTON, D.C. — The Navy may not continue to put its Independence-variant Littoral Combat Ships into the drydock every time they go into planned maintenance, as one way of dealing with a looming shortfall in drydock availability and private sector maintenance capacity.

Vice Adm. Tom Moore, commander of Naval Sea Systems Command, told USNI News that the LCS-2 hulls have to be drydocked for all planned maintenance events, partly due to a requirement to inspect the condition of the hull each time. Most of the Navy’s ships are made of steel, so with the Independence-variants being made of aluminum, the Navy decided early on to gather data through hull inspections at each planned maintenance event.

“Part of the drydocking piece was to do an underwater hull inspection,” Moore said.
“So we’re looking at, hey, are there other ways we can go do that inspection? So I think that’s viable, and if we can do that that’s great because not having it docked every time would be good. So we’re coming through the technical piece, we haven’t finished it yet but my goal is to try to get us to a point where we could figure out how to do the inspections without having to put the ship in the drydock.”

Rear Adm. Lorin Selby, NAVSEA’s chief engineer and deputy commander for ship design, integration and naval engineering, told USNI News during the same conversation that NAVSEA would evaluate an Independence-variant ship this fall to see how much the condition of its hull had changed over time, and “pending those results we may be able to actually, we think, possibly double the interval on the drydock, which would give us a lot more flexibility.”

The admirals didn’t have the exact maintenance schedule but said they believed the drydocking requirement could go from once every three years to once every five to six years, if the engineering study this fall supported only using the drydock every other maintenance availability.

Moore, speaking at the American Society of Naval Engineers’ annual Technology, Systems and Ships conference, said it’s clear the Navy will begin to need more drydocking availability than the private sector can offer, and that deficit in availability will become unmanageable in the next three to five years if companies don’t begin to make an investment now. Reducing the LCS requirement for drydocks wouldn’t be a total solution but would certainly go a long way in reducing demand on West Coast yards, since all the Independent-variant ships are stationed in San Diego.

Exacerbating the drydock shortage is the fact that most Navy surface combatants and amphibious ships undergoing maintenance in the private sector come out of the availability later than planned – since 2011, ships averaged about 60 days late, the admiral said. If those ships came out in a timely manner, new ships could come in and rotate through faster.

“The private sector today, they don’t have the capacity to do the work we need,” Moore said in his speech.
“By our account, we’ve got about 15,750 workers in the private sector nation-wide; that’s about 75 percent basically of where we are from a workload perspective today, and it results in us delivering most of our surface ships late.”

Moore said many of the yards aren’t growing their workforce because the Navy’s operations and maintenance budget can be so unpredictable. Bringing in more employees would meet the Navy’s stated need but also represents a large, long-term cost for the company if the Navy doesn’t follow through and fund all of the maintenance availabilities it says it needs.

“They’re doing the math and saying, hey, if there’s no long-term predictability in the work, it’s probably better for me for my bottom line to perhaps deliver a little bit late but not over-hire. And so it’s incumbent upon us on the Navy side to send a very clear signal that there’s stable, predictable work coming and tell industry, hey, I need you to hire,” Moore said.

While the situation today is bad, it is only bound to get worse, Moore said. The Navy has 284 ships today and plans to grow to 355. Of those 71 additional ships, only nine are submarines and aircraft carriers that would be maintained at the public naval shipyards, Moore said; the rest would rely on the private sector for maintenance.

“We may not be challenged to get to 355 from a pure numbers standpoint; we’re going to be challenged in having 355 ships that we can go out and use and give to the combatant commanders to do the missions around the world we need to do,” he added.

Moore told the audience that “this is my number-one focus area now as COMNAVSEA. I probably spent more time on public shipyards in the first two years, but I think we’re on a better path there. … But the private sector is really where the biggest challenges are going to be in the next three to five years, in my opinion.”

On the public naval shipyard side, Moore said the Navy isn’t out of the woods yet but is seeing an “improving trend.” Hiring is on track to support reaching a higher workforce goal by 2019 or 2020, and a shipyard optimization plan has gone to Congress to outline a 20-year, $21-billion modernization and optimization effort. Included would be funding to replace aging drydocks with ones that can accommodate the longer Block V Virginia-class attack submarines and the higher power requirements of the Ford-class aircraft carriers; recapitalization of tooling and equipment, which the Navy only does every 20 to 25 years instead of every 10 years like private industry; and create a more efficient layout of shops, offices and other buildings at the four naval shipyards, some of which were originally designed to build new ships instead of repair nuclear-powered ones.

Moore said about two-thirds of the overall bill will go to layout redesigns.

“We found when we did some recent studies that at Norfolk Naval Shipyard we actually walk, the workforce walks the circumference of the Earth every single day getting back and forth between the shops and the ships,” Moore said.
“And so you can imagine that’s wasted time, and we think it’s wasted to the tune of at least 6 percent right off the bat – 6 percent of your labor hours are going to just transit.”