The joint statement says, “President Trump committed to provide security guarantees to the DPRK (Democratic People’s Republic of Korea, or North Korea), and Chairman Kim Jong Un reaffirmed his firm and unwavering commitment to complete denuclearization of the Korean Peninsula.”

The language is aspirational but doesn’t spell out anything concrete, Sue Mi Terry, senior fellow and Korea Chair at the Center for Strategic and International Studies, said in a Tuesday call with reporters.

“I don’t even think there’s an agreed-upon definition,” Terry said. “I’m still seeing ‘denuclearization of the Korean Peninsula’ [in the statement] versus North Korea unilaterally dismantling their nuclear-weapons program.”

Denuclearization has different definitions for the U.S. and North Korea, analysts say. Understanding the differences between the relatively narrow U.S. definition and the much broader North Korean definition will be vital if a lasting agreement is reached.

“Pyongyang defines denuclearization as global arms control and, as a self-professed member of the nuclear club, it will reduce to zero nuclear weapons when the rest of the world does,” Bruce Klingner, primary North Korea analyst with the Heritage Foundation, told USNI News in a statement.
“This has been a long-standing position well known to Korea watchers but which the White House didn’t understand when Kim Jong Un conveyed in March when he expressed willingness to discuss denuclearization. When a senior North Korean official reiterated it publicly in May, the White House was surprised and interpreted it as a broken promise.”

Also, while South Korea does not have a nuclear program, the North Korean government has long considered denuclearization to include banning nuclear weapons and their delivery systems from even visiting the peninsula, Frank Aum, senior expert on North Korea at the U.S. Institute of Peace, told USNI News on Wednesday.

“We believe this means not just our weapons, but nuclear-powered aircraft carriers, submarines and bombers,” Aum said.

What’s unclear is if under Pyongyang’s idea of denuclearization would tolerate U.S. nuclear-powered ships or submarines even transiting South Korean territorial waters, Aum said. These details would have to be ironed in the future negotiations hinted at in the joint statement.

“I think the U.S., North Korea, China and South Korea would have to come to some sort of agreement,” Aum said.

The wide differences in what denuclearization means have to be ironed out, especially considering the poor track record the U.S. has with past agreements with North Korea, Klinger said.

“Because the U.S. and North Korea have such different interpretations, and given the failure of eight previous agreements with Pyongyang, it shows the necessity of having clearly delineated text and rigorous verification protocols. Both of those components were included in arms control treaties with the Soviet Union and Warsaw Pact but in none of the agreements with North Korea,” Klinger said. 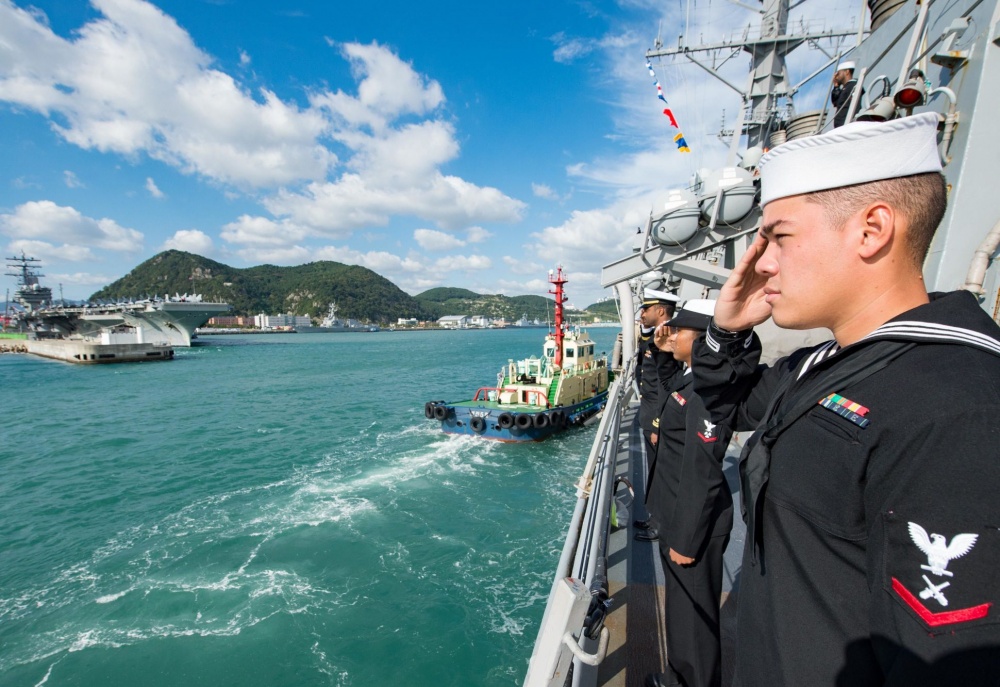 The U.S. Navy’s standard response to inquiries about whether nuclear weapons are aboard surface ships or submarines is to neither confirm nor deny their presence, Tom Callender, the primary naval analyst with the Heritage Foundation, told USNI News in a statement. But Callender doesn’t think the Navy should change its operations in the region.

In the past, instead of declaring whether Navy ships carried nuclear weapons, the Navy has simply stopped visiting countries with nuclear restrictions. In 1984, when New Zealand adopted anti-nuclear legislation banning nuclear-armed or nuclear-powered vessels from visiting the island nation, the Navy stopped scheduling port visits altogether. More than three decades passed before the Navy again considered sending non-nuclear ships to the South Pacific ally.

“Even if North Korea denuclearizes and a formal peace agreement is signed, the U.S. Navy should still continue to conduct port visits to the Korean peninsula and conduct naval exercises in the surrounding waters [the Yellow Sea and the Sea of Japan],” Callendar said.
“This would be primarily to message China of U.S. intentions to maintain our forward presence in the area as well as reassure our regional allies. Exercises and U.S. Navy deployments to the Sea of Japan also send a message to Russia with its Pacific Fleet headquarters in Vladivostok.”

A Win for China

Already, just talking about curtailing U.S. Navy operations in the region is a win for China, which so far has secured concessions from the U.S. without even directly asking, Abraham Denmark, director of the Wilson Center’s Asia, said during a media conference call.

The whole process “was fairly cost-free for China,” and it started with North Korean leader Kim Jong Un’s visit to Beijing, Denmark said. It shows China’s “expanding influence … at a time when its power is increasing and the United States’ is decreasing” in Asia and the Pacific.

“It’s a real heartwarming development for Moscow and Beijing, which have wanted to weaken American influence in Asia and globally by having our alliances unravel. And the president of the U.S. seems to be pulling the string to do that. So pretty stunning,” said Michael Green, senior vice president for Asia and Japan Chair with the Center for Strategic and International Studies, said during a media conference call.

The next few weeks will likely provide some clarity as to the military’s future activities in Korea, the analysts said. The U.S. should know pretty quickly, within weeks, whether the North is serious about continuing the denuclearization process, Aum told USNI News. The signal will be if high-level meetings occur between the U.S. and North Korea officials.

As to what the United States received from the summit, the answer is still murky, Robert Daly, director of the Kissinger Institute on China at the Woodrow Wilson Center, said during a media conference call. Later talks will have to establish mileposts and goal posts to denuclearize North Korea and ensure verification.

But Pyongyang has a history of saying one thing and doing the opposite, Daly said: for example, saying it was ending its nuclear weapons program in the 1990s but meanwhile continuing to enrich uranium for nuclear weapons at underground facilities not visible to satellite inspection or agents’ visits.

Either Trump or Pentagon officials will likely start walking back some of the comments made regarding troop levels, joint exercises, bomber flights and other types of military activities the North Koreans have and Chinese have wanted to be curtailed, Green said.

“As far as the joint statement goes, I guess this was sort of the medium outcome,” Terry, the Korea chair at CSIS, said.
“But it’s not obviously optimal, because we didn’t get… anything concrete out of North Korea.”