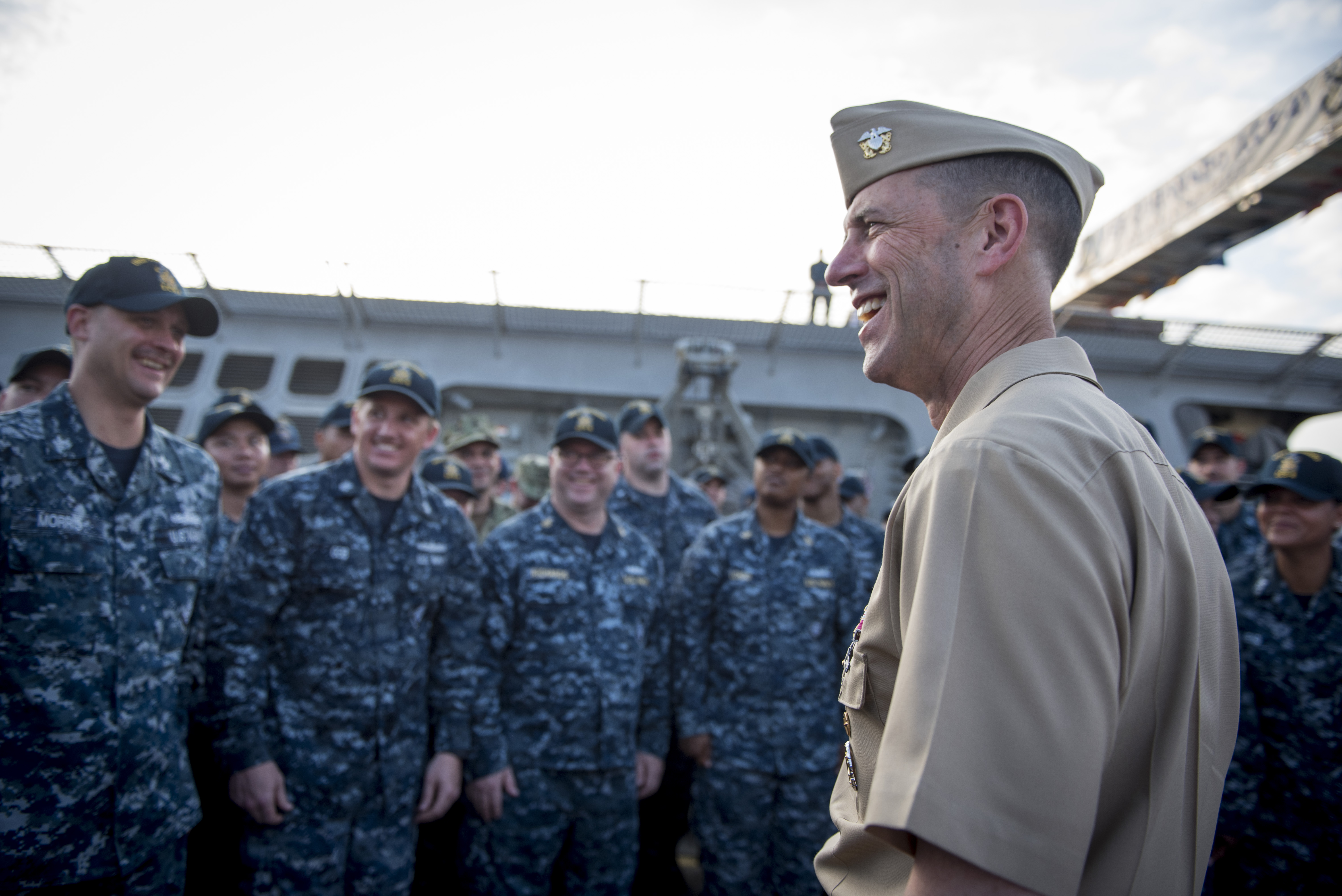 Chief of Naval Operations Adm. John Richardson holds an all-hands call aboard the littoral combat ship USS Coronado (LCS 4) on May 16, 2017. The ship is moored in Changi, Singapore, in preparation for the International Maritime Defense Exhibition. US Navy photo.

CAPITOL HILL — The Navy anticipates returning to a ready state by 2022, top leadership said today, after being gutted by nearly a decade of continuing resolutions and budget caps.

Chief of Naval Operations Adm. John Richardson told the Senate Armed Services Committee today that, after years of budget instability drained Navy readiness, improvements in the Fiscal Year 2017 supplemental budget and the 2018 budget that was recently approved are putting the Navy on the right path to recover.

“It took some time, a decade, to get into this. We anticipate getting out in about half the time. So I look to the early 2020s – ‘21 and ’22 – to start getting back to that level of readiness,” Richardson told the committee.

The CNO told USNI News after the hearing that different types of readiness – ships, aircraft, people, maintenance capacity and more – all had their own readiness recovery timelines but that they mostly spanned from 2021 to 2023 in terms of returning to a pre-sequestration readiness level.

“The big question when you talk about readiness is, ready for what? And so it’s ready to meet our obligations for response force around the globe, and then ready to meet our obligations in response to any contingency that might arise, and do so in a sustainable way that’s not eating our seed corn for future generations,” he said when asked what that level of readiness looked like.
“What we’re hoping to do is get this done inside the (five-year Future Years Defense Program).”

Navy Secretary Richard V. Spencer, who told the committee during the hearing that the FY 2019 budget request funds military construction and investments in shore facilities at about 80-percent of the need – which is much higher than recent budgets have done – told the senators that, in terms of regaining infrastructure readiness, “you’re probably looking at the same for readiness with the fleet, which is in the early ‘20s.”

Spencer told USNI News afterward that he considered an appropriate readiness level to be one where “we have the depth to surge” based on world events and threats, without putting at risk future regularly scheduled deployments of strike groups, ships and units. 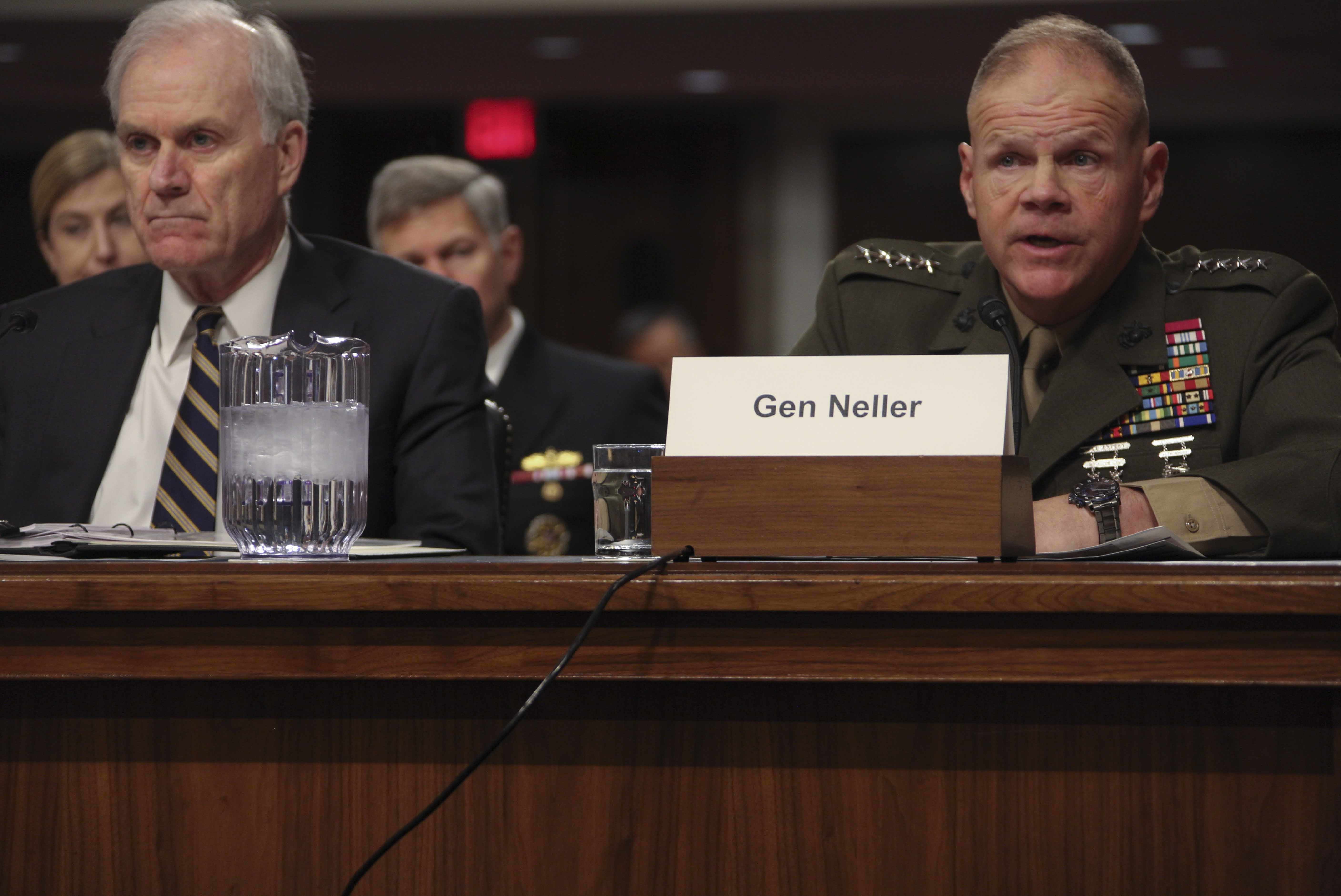 The Honorable Richard V. Spencer, Secretary of the Navy, left, and Commandant of the Marine Corps Gen. Robert B. Neller speak to the Senate Armed Services Committee on April 19, 2018. Neller, Spencer, and Chief of Naval Operations Adm. John M. Richardson discussed the current health and future plans of the Department of the Navy. US Marine Corps photo.

Commandant of the Marine Corps Gen. Robert Neller spoke about readiness a bit differently, with a keen eye on the role modernization plays in today’s readiness and tomorrow’s.

“Obviously we want to go as fast as we can. The aviation piece is going to take the longest. But I think more important, you’ve got readiness of the force as it exists now, but more importantly is, what do you want that force to look like in four or five years? And then we’ve got to meet today’s requirements,” Neller said to USNI News after the hearing.
“So that’s kind of the three-legged stool we’re sitting on: hey, we’ve got to meet today’s requirements; we’ve got to regain our readiness in the force we have now to get ready for what’s coming tomorrow; and then we’ve got to modernize the force for what we think might happen in five, six, ten years. Really that’s where I think our minds are: where we’re going to be in five, six, ten years. So I think if we continue to get sustained, consistent funding, I think the readiness of the force as it exists today, as we buy new and get better parts support, it’ll go faster. If we don’t, it won’t.”

Neller told the committee during the hearing that, as the Marine aviation community in particular looks to become more ready, “there are a number of things that we’re trying to do, the most important of which is buy new aircraft.”
“But there will be a legacy fleet, you’re always in a legacy fleet whether it’s ground equipment or air equipment. So first, buy new. Second, we funded readiness in this budget at a much much higher level than we ever have before, so we have money for parts and spares.”

Neller noted to the committee that the FY 2019 budget request also increases the flight hour program, or the number of hours each pilot can fly in training at home – though those flight hours can only take place if the Marines also buy sufficient spare parts and other enablers to keep planes ready to be flown.

Speaking about recent Marine aviation mishaps – including a fatal CH-53E crash in California and two non-fatal crashes on the first day of an exercise in Djibouti – Neller told lawmakers, “part of our recent readiness issues, and some of the things that have happened, we’ve got a whole, like five or six years of pilots who were, it used to be if they were a senior captain or a major they were at like 1,500 to 2,000 hours. Now they’ve got under a thousand because they haven’t been flying enough. And so we’re trying to remedy that. Just like CNO said, it didn’t happen overnight to get to this point, it’s not going to get fixed overnight. So steady, consistent funding is what’s going to allow suppliers out there to get us parts, because they’re going to believe the governments going to be there, that they can keep their workforce, they can order the stuff that they need to build the parts, and then we can get it faster and get more airplanes and other equipment ready.”

The Marine Corps and Navy have in the past couple budget requests put a renewed focus on spare parts and logistics to increase aviation readiness, and some progress has been made in the number of flight hours pilots are seeing, though a high percentage of pilots are still receiving many hours a month fewer than they should be flying. Though spare parts cannot be manufactured and delivered any faster, Spencer said the Navy is looking at some other ways to boost aircraft readiness and availability for pilots.

Explaining the Depot Readiness Initiative pilot program, the secretary said, “what we were finding out was, in the case of a legacy plane, it goes up into depot, it’s a thousand man-hours to take it apart and do the depot level maintenance – well back at the squadron the calendar maintenance clock was still running, so now the plane comes back to the squadron and you’ve got to spend another 500 hours taking things apart and putting things back on to make sure that it’s brought up to certification. Why not do that up at the depot-level maintenance?”

Spencer said one hurdle had been that depot-level maintenance and squadron-level maintenance were funded from different pots of money, but he said the pilot program is helping the Navy work through any barriers so that planes can come back from the depots ready to be put to use by pilots eager for more flight hours.