Marine Corps and Vietnam veteran R. Lee Ermey, whose Hollywood career was cemented in his acclaimed portrayal of a hard-core, ranting senior drill instructor in the movie Full Metal Jacket, died on Sunday morning. He was 74.

Ermey’s passing was announced by his long-time manager, Bill Rogin, in posting late Sunday afternoon on Ermey’s Twitter handle, @RLeeErmey. The veteran actor’s death, attributed to complications from pneumonia, was unexpected and prompted remembrances from Marines and fans nationwide.

It is with deep sadness that I regret to inform you all that R. Lee Ermey (“The Gunny”) passed away this morning from complications of pneumonia. He will be greatly missed by all of us.

Rogin posted a statement on Ermey’s Facebook page, which by late night garnered more than 70,000 comments and was shared by more than 578,000 people:

“It is a terrible loss that nobody was prepared for. He has meant so much to so many people. And, it is extremely difficult to truly quantify all of the great things this man has selflessly done for, and on behalf of, our many men and women in uniform. He has also contributed many iconic and indelible characters on film that will live on forever. Gunnery Sergeant Hartman of Full Metal Jacket fame was a hard and principled man. The real R. Lee Ermey was a family man, and a kind and gentle soul. He was generous to everyone around him. And, he especially cared deeply for others in need,” read the statement.
“There is a quote made famous in Full Metal Jacket. It’s actually the Riflemen’s Creed. ‘This is my rifle. There are many like it, but this one is mine.’ There are many Gunny’s, but this one was OURS. And, we will honor his memory with hope and kindness. Please support your men and women in uniform. That’s what he wanted most of all. Semper Fi, Gunny. Godspeed.”

Tributes and remembrances came quickly across online social media websites for the actor whose role as Gunnery Sgt. Hartman in Full Metal Jacket earned him a Golden Globe nomination for best supporting actor and solidified his role as a model Marine disciplinarian and staff non-commissioned officer.

Thank you for hour contribution in helping @RLeeErmey become the outstanding person he was. Hard working. Disciplined. Focused. Never complaining.

There’s no doubt his Marine Corp training benefited him with his second career as an actor. #SemperFidelis https://t.co/NKVBdie4sl

Ermey initially was to serve as a military technical adviser for the film but ended up auditioning for the role as Gunny Hartman, according to IMDb, the Internet Movie Database. The role came naturally to Ermey, who served as a DI during his Marine Corps career, which stretched from 1961 to 1972, and he later stepped into the world of acting. He had left the service as a staff sergeant but received an honorary promotion to gunnery sergeant by then-commandant, Gen. James L. Jones, in 2002.

The Vietnam War was still a national wound when the Stanley Kubrick-directed and produced film debuted in 1987 to critical acclaim, earning an Academy Award nomination for best adapted screenplay. But for two generations, and countless recruit training platoons, Full Metal Jacket served as the de facto imagination of what boot camp is like, with biting insults and demeaning yet well-meaning treatment meant to strip one’s personality before relentless drills and physical training honed them into fighting Marines. 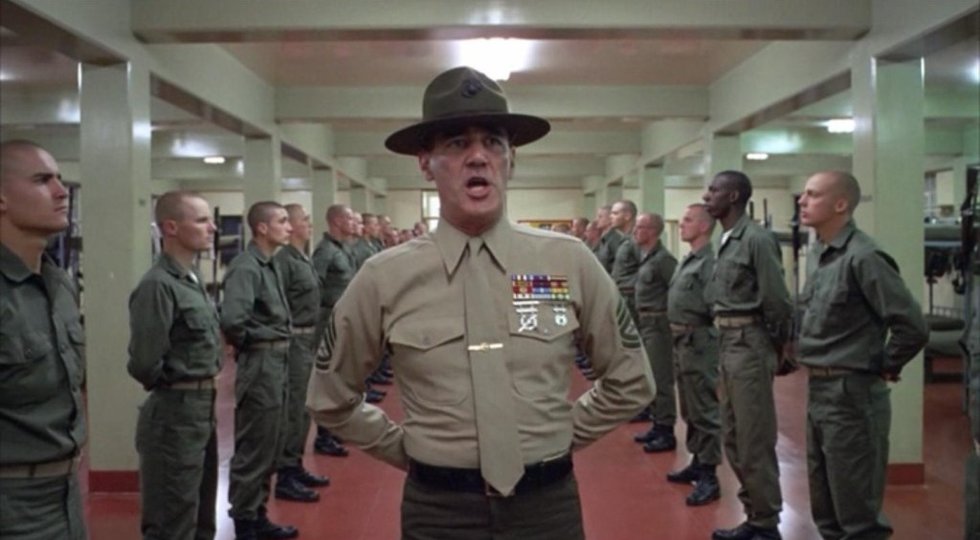 While Full Metal Jacket provided a Hollywood take on Marine Corps recruit training at Parris Island, S.C., and the Vietnam combat experience of 1968, the movie has had an untold, indelible effect on the Marine psyche ever since its release. Anyone who endured even a minute of recruit training or flirted with the thought of becoming a recruit is sure to have watched the film and can recall Gunny Hartman’s spit-spewing tirades.

Ermey’s Hollywood career, rooted strongly in his portrayal of a drill instructor in the movie Full Metal Jacket, earned him lifelong accolades and the Marine Corps’ honorary bestowal of the rank of gunnery sergeant. His Hollywood career was peppered by acting roles in film and on television, as well as voice roles and commercials. In recent years, he hosted the show “Lock N’ Load with R. Lee Ermey” on the History Channel and, until his death, “Gunny Time” on the Outdoor Channel.

Ermey’s survivors include his wife, Marianila, and six children, according to an obituary in The New York Times.