WASHINGTON, D.C. — The Navy intends to support a near-term increase in ship inventory and deployed forces by forward-deploying some ships with rotational crews, tackling often-overlooked manpower costs and reestablishing the readiness squadron concept. However, many questions still remain about the feasibility of the buildup in force structure and operations at sea.

The service announced in budget documents released this week that it intends to reach a fleet of 326 ships, with an average of 131 deployed at any given time on average, by Fiscal Year 2023 – up from 280 ships total and 100 deployed today.

Asked on Monday how the Navy would support a 31-ship increase in deployed forces with just a 46-ship increase in the total battle force inventory, Navy spokesman Lt. Seth Clarke told USNI News today that “the FY23 deployed ship count is a projection of the cumulative number of ships that have a deployment in FY23 based solely on ship schedules. It has not undergone the global force management process.”

Still, these figures from the Navy’s budget briefing material and the new 30-year shipbuilding plan are among the first details released about how the service’s buildup to a 355-ship fleet will begin to take shape. That 2023 timeframe will be an early test of the Navy’s ability to support a larger and more active fleet, with the required manpower, training, maintenance, spare parts and more to support these ships. 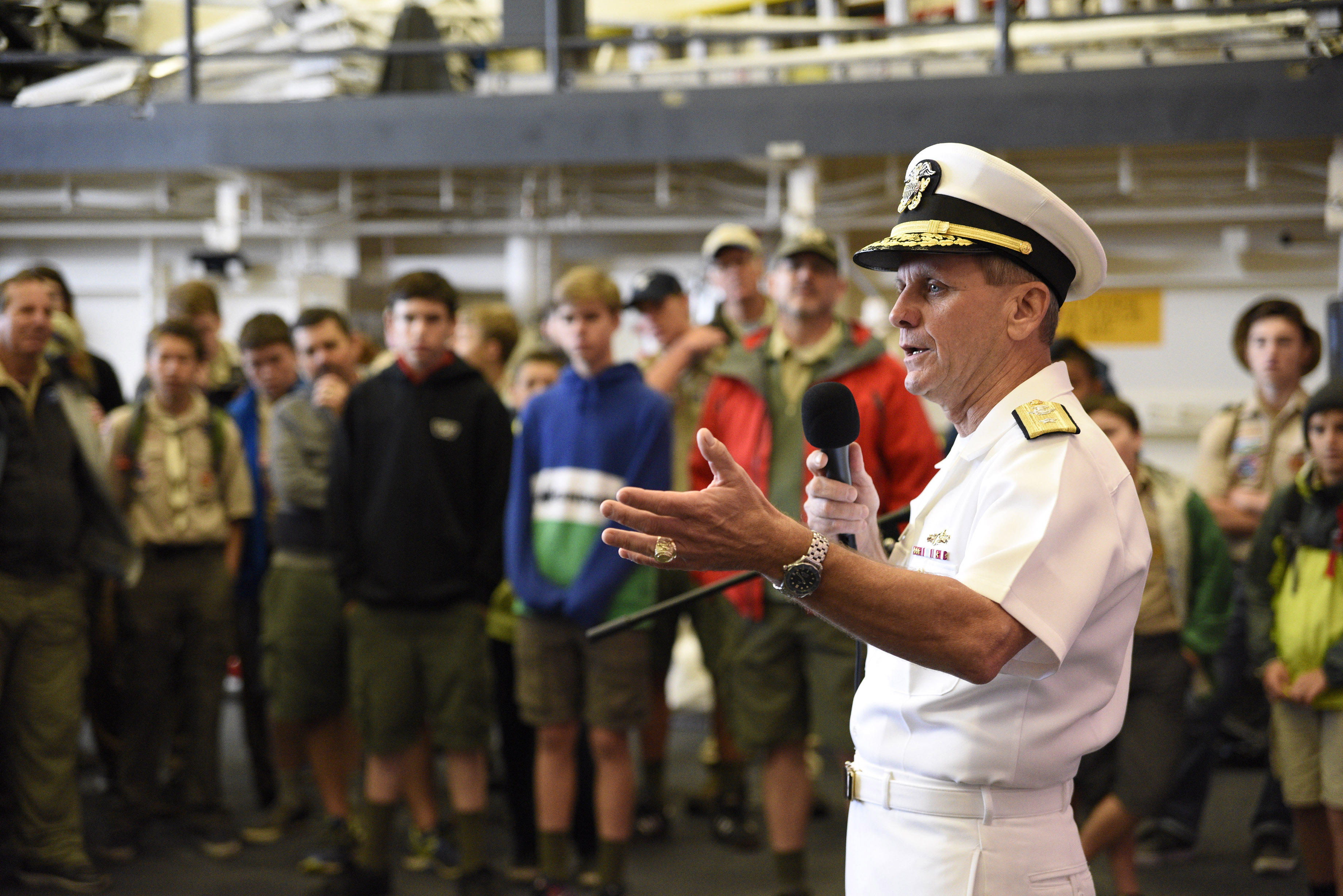 First, he said, more of those ships will be Littoral Combat Ships, which the Navy intends to keep forward deployed for about a year and a half at a time, with two crews rotating in and out of theater using a blue/gold crew model. That setup creates higher operational availability than a traditional continental U.S.-based single-crew deployment model – though Center for Strategic and Budgetary Assessments senior fellow and retired Navy commander Bryan Clark noted at the event that the forward deployed and forward stationed models still don’t create enough added operational availability to account for 31 more ships at sea.

Clark noted that traditional deployment models create operational availability of about 20 or 25 percent and forward-deployed ships create about 50-percent availability. “If you look at the numbers, we’re only adding in that timeframe about nine to 10 of these forward-deployed or forward-stationed ships, so you’re still not generating the kind of readiness that would automatically result in 40 ships giving you 30 more forward-deployed,” he said.

Second, Brown said, the Navy is reducing risk by actually buying all the manpower it needs.

“We have never bought the total ownership cost of manpower. If you look at the number of gaps that are at sea right now [on ships, submarines and aviation squadrons], that’s about 7,000 fill gaps at sea. If you look at the individuals that account for TPPH, that’s transients, prisoners, personnel on hold, limited duties and pregnancies, guess what that number is? It’s about 7,000, because we never bought those billets, because when we get under budgetary constraints, where’s the biggest account that you can go get money?” said Brown, who most recently worked as the commander of Navy Personnel Command and deputy chief of naval personnel.
“This [Chief of Naval Personnel], [Vice Adm.] Bob Burke, has done an incredible job; the OPNAV staff has done an incredible job; [Chief of Naval Operations Adm. John] Richardson and N8 have completely supported in ’18 and ’19 buying the total ownership cost. If you look in the surface community, we’re buying 98 percent of the billets authorized. That, in conjunction with buying the total ownership cost, is going to buy down that risk in the out years.”

Still, as all the panelists agreed – including retired Vice Adm. Phillip Balisle, a former Naval Sea Systems Command commander who penned the 2010 Fleet Review Panel to address surface ship readiness issues at the time – the seven sections of the “circle of readiness” cannot be addressed individually but must be looked at together. Those include material readiness of ships, manpower and manning, training, financials, organization, command and culture.

“I would suggest that, while the circle of readiness applied very much in 2010, it applies just as much today. As the solutions are determined for how we’re going to go ahead and fix some of the problems the fleet’s addressing today, they’re going to need to figure out how those [seven sections] relate,” Balisle said at the panel event.
“And what makes it so difficult, if you look at those spokes, those different areas: most of them are under the control of a unique and different person, and none of those people ever come together really under a centralized command group who has real cognizance and knowledge of what’s going on in each of those spokes. So you have very well intended people making good decisions about one of the spokes and not realizing what they’re doing to the others. This is made more critical in times of difficult budgets. … When the money is not there and you have to make tradeoffs, and then you don’t have these coordinations between the different areas, you are asking for some serious, serious trouble.” 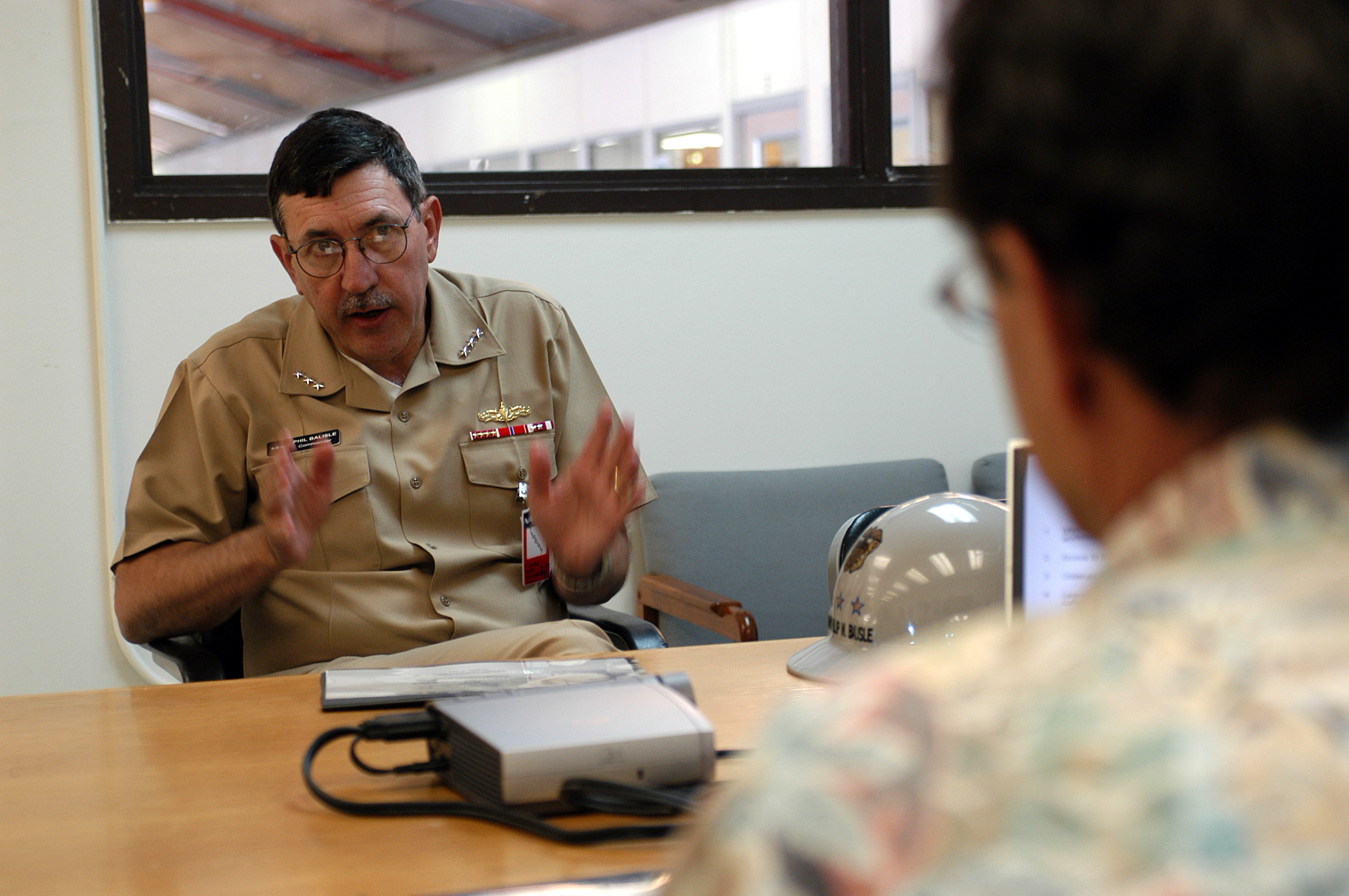 Brown said the Navy was trying to avoid that exact problem by standing up a Readiness Reform Oversight Council (RROC) to consider and implement the recommendations of both recent reviews on the status of the Navy: a fleet-led Comprehensive Review and a Navy secretary-ordered Strategic Readiness Review.

In fact, the oversight group is considering one of Balisle’s recommendations from eight years ago that would promote some of that cross-community dialogue aimed at increasing readiness without compromising any particular sub-component of readiness. Balisle spoke strongly in favor of the return of the Readiness Squadron to keep an eye on ships as they move through the force generation process, and Brown said that “it is absolutely on the table, and it’s one of my priorities.”

In fact, Brown said, the Naval Surface Group Western Pacific – which the CR advocated standing up but the SRR argues against – is being renamed as Surface Readiness Squadron 25, a throwback to the old construct that was abandoned in the 1990s that Balisle’s 2010 report called “a clear line of accountability for the material readiness of the ships.”

“The real key to this is the C2 (command and control); to have the readiness squadron and not have the right C2 you won’t get the entire bang for the buck,” Brown said, noting the topic was still being discussed within the oversight council.

Balisle said at the event that, for all the many recommendations the Navy chose to accept and try to implement in 2010, “one they chose not to do in 2010 was to reestablish the READRONs. And I firmly believe that in 2010 it was the single most significant change we needed to make, and in my humble opinion, caveated by the fact I’m not out there (in the fleet today), I believe it’s just as applicable today as an enduring principle.”

“Deployment schedules are very unpredictable, and yeah we’re getting some more ships in the future maybe, but we’re living with what we’ve got, and the strain on the force and the responsiveness has got to be even greater as world events continue to be very challenging,” the retired admiral said.
“So if you take squadrons and groups and you try to have them deal with the day-to-day training and material readiness and personnel, manning of the force, it’s almost impossible because they’ve got a full plate dealing with very significant operational environments, and they’re not physically present, which is what the READRONs did. … They can do things like see trends as they develop, they can manage personnel augments because they know the people involved and their qualifications and what they do. They can look at how certifications are being done and they can certify everything from admin to navigation to combat systems and the whole spectrum – and they’re right there on the ship, day in and day out. I believe that continuity of presence, that continuity of consistent interaction with the ship and enforcement of the standards that are set is indispensable.”

In addition to listing actions the Navy could take to continue addressing its readiness, Balisle noted another group that could remove some barriers to readiness: Congress.

“Congress has a job too, that job is to fund and maintain the Navy, and to be able to give it the resources it needs,” he said.
“The damage that has been done – if you understand material readiness, you understand contracting and what you have to do, if you understand what a steady money stream really means to your ability to do this mission – you will quickly come to the conclusion that the damage that has been done by the United States Congress in the recent decade to our military services is grossly, grossly extreme.

Without predictable and on-time funding, he said, “we will never be able to get ahead of this problem no matter what the United States Navy does.”