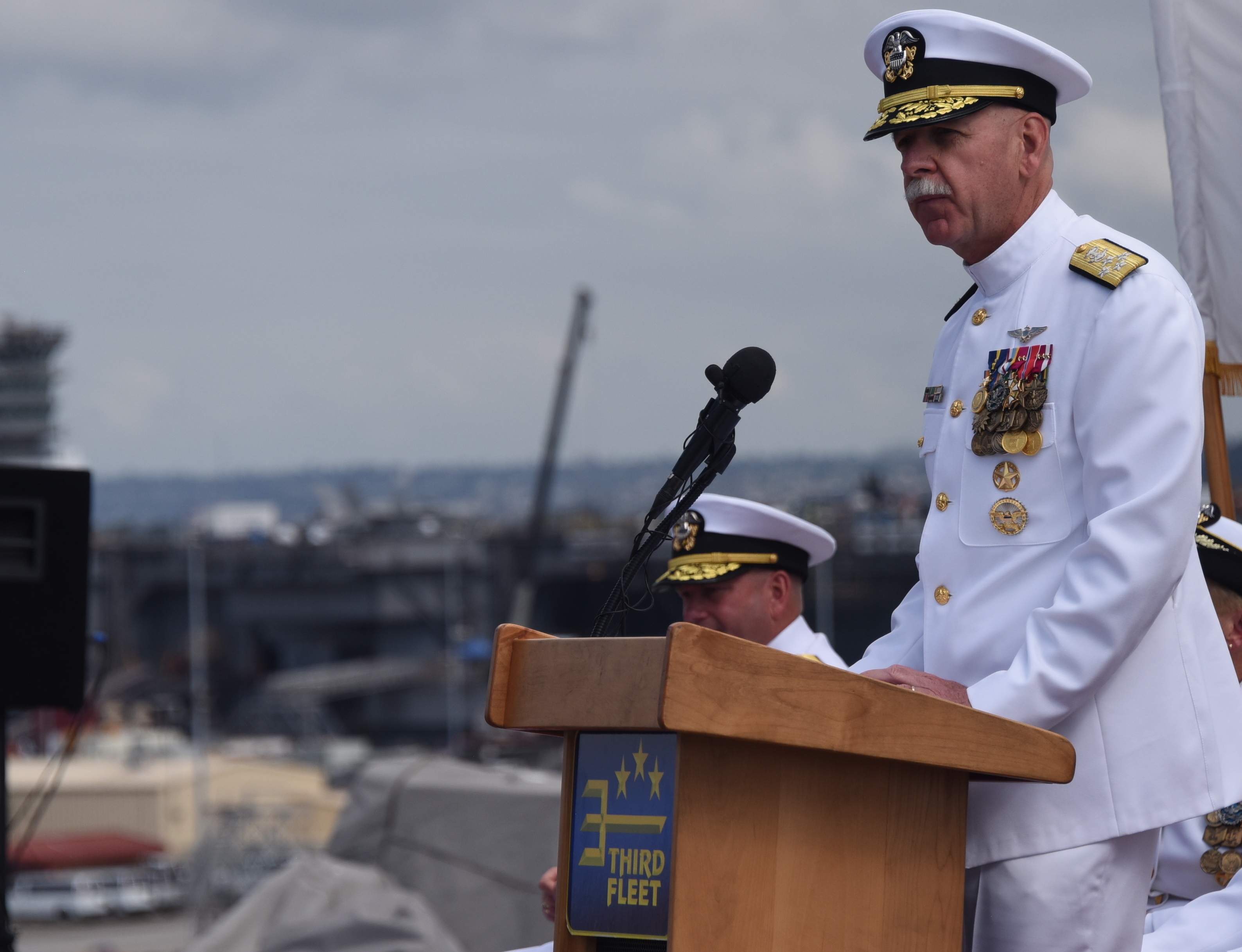 SAN DIEGO, Calif. — The commander of U.S. Pacific Fleet pushed back against recent discussions that he shouldn’t both prepare and operate ready forces and that force-generation should be concentrated at U.S. Fleet Forces Command on the East Coast.

Adm. Scott Swift also denied the Pacific Fleet was training its forces to a different standard than East Coast ships and warned that concentrating force-generation responsibilities on one coast would be counterproductive in today’s competitive maritime environment.

In the aftermath of two fatal surface navy collisions and two other major mishaps in the Pacific last year, a Comprehensive Review and a Strategic Readiness Review looked at various contributing factors, including command and control structures within the fleet. Lawmakers on the House Armed Services Committee have taken a particular interest in the topic, with several members suggesting they’d like to create a system where U.S. 2nd Fleet is reestablished to serve as a force-generator on the East Coast that parallels U.S. 3rd Fleet on the West Coast, and U.S. Fleet Forces Command takes over as the lead developer of policy and standards for the Navy’s man, train and equip functions.

Swift told USNI News today that the two reviews recommended two different command and control models – the CR suggested a Naval Surface Group Western Pacific be inserted into the current organization to oversee training and certification of deploying forward-deployed forces in the Pacific, whereas the SRR recommended making Fleet Forces the “single-source provider” of readiness generation – and warned that “we need to be careful” about concentrating the authority to train, certify and deploy ready forces under a single command.

“I’ll use Amazon as an example – why is Amazon going down the path of multiple headquarters? If centralization is the key to business excellence, why is Amazon going in a different direction?” he told USNI News after giving a speech at the WEST 2018 conference, co-hosted by the U.S. Naval Institute and AFCEA.
“This idea of centralization is what our peer competitors expect us to do; they saw us do it in Iraq, they saw us do it in Afghanistan, that’s their expectation. So if we’re going to take an asymmetric approach to warfare, why would we take a symmetrical approach to what we’re doing in command and control?”

As for the concern that having two readiness providers creates two readiness standards, Swift said bluntly: “we do not have multiple standards. We train the fleet to the same standard.”

“The last five carrier strike groups that deployed, we built that readiness. PACFLEET did, they all deployed off the West Coast. And they’re performing magnificently in Syria, Iraq, all those other places. So there’s not a double standard,” the admiral said.
“Our ability to achieve that standard in [Forward Deployed Naval Forces- Japan] is challenged, we can’t meet the same standard that our West Coast deployed units meet or what our East Coast deployed units meet. … We don’t have the ranges in Japan that we do on the West Coast. There’s also a difference between the West Coast ranges and the East Coast ranges, so I’m not about to criticize the model that [Fleet Forces Command] has because their environment is different.”

More broadly, Swift said he was pleased with how PACFLEET has handled its responsibilities: by overseeing readiness being both produced and consumed by both U.S. 3rd Fleet and U.S. 7th Fleet, he said he has been able to find efficiencies, such as the 3rd Fleet Forward deployment model.

“When I traveled around the theater after I took over as Pacific Fleet, when I would talk to people about the power of the Pacific Fleet, what was reflected back to me was the power of 7th Fleet. 3rd Fleet was force generation and all that other stuff,” Swift said of the common assumption about the roles of 7th Fleet and 3rd Fleet. But today, under the 3rd Fleet Forward model, where strike groups deploy from San Diego and remain under 3rd Fleet command and control the whole deployment, instead of moving to 7th Fleet command and control after crossing the international dateline, the “Vinson [Carrier Strike Group] is out prowling around in the Pacific right now, the leading edge of U.S. national interests, being commander by Adm. Alexander here in the 3rd Fleet headquarters.”

With so many potential conflicts lurking in his area of operations, “in my world, how am I going to fight a major warfight with the resources that I have right now?” Swift said is his primary focus.
“That’s my responsibility. That’s where the focus is, and that’s why we’re doing 3rd Fleet Forward, so we have more availability of ships to act as a deterrent to be where it matters when it matters with what matters.”

During his lunchtime speech, Swift told the crowd at WEST that being a producer and consumer of readiness has given him a unique perspective on matters of funding both sides of the equation. Mentioning the carrier strike group’s force generation model, the Optimized Fleet Response Plan, and its creator, former Fleet Forces commander Adm. Bill Gortney, Swift said “when Adm. Gortney talked about OFRP, he said the relevancy of OFRP is going to be based on whether it’s funded or not. So it’s a great process, it’s a great readiness tool, but we have to resource it. And then we have to resource operations based on the amount of readiness we’re able to generate. So we may have to do less – the Navy is a can-do organization, we’re getting underway, we’ve got a mission. Well, wait a minute, we need to take a look at our readiness to get underway.”