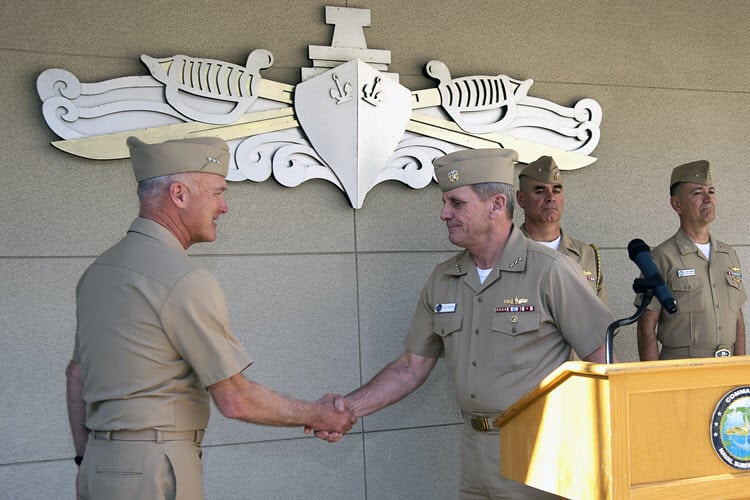 “It has been an honor to serve with you,” Rowden said in a statement.
“I am proud of all of you and all you do to keep our nation free.”

Brown takes command of SURFOR after having been the commander of Navy Personnel Command (NPC) and the deputy chief of naval personnel. A 1985 graduate of the U.S. Naval Academy, Brown earned a Bachelor of Science in Mathematics. He also holds a Master of Science in Operations Research, from the Naval Post Graduate School, and a Master of Arts in National Security and Strategic Studies from the Naval War College. Brown is a native of Lowell, Mass.

Rowden had announced his retirement in September, following a preliminary investigation into the Aug. 21 collision between USS John S. McCain (DDG-56) and a chemical tanker near Singapore. McCain’s collision occurred two months after a June 18 collision between USS Fitzgerald (DDG-62) and a cargo ship near Japan. A total of 17 sailors died in the collisions and both ships were heavily damaged.

The quiet change of command was an abrupt change from what had been planned, a full retirement and change of command ceremony scheduled for February 2. Rowden’s earlier-than-expected retirement was a direct result of findings from an independent study, conducted by the head of Naval Reactors Adm. James F. Caldwell, of the factors leading up the pair deadly collisions.

Caldwell reported his findings to Chief of Naval Operations Adm. John Richardson and other Navy leaders over the weekend, and included unspecified disciplinary actions for Rowden, resulting in the early turnover, several sources previously confirmed to USNI News.

Rowden is the second senior flag officer to turnover command as a direct result of the summer collisions. In August, Vice Adm. Joseph Aucoin was quickly relieved as commander of U.S. 7th Fleet the day after McCain’s collision, and just a couple of weeks before his scheduled retirement ceremony.

A week ago, speaking at the annual Surface Navy Association’’s 2018 annual symposium, Rowden sounded melancholy when reflecting on his naval experiences since graduating from the Naval Academy in 1982.

The shrinking fleet size, from nearly 600 ships in the 1980s to the 275 ships today was the first change he mentioned. The Navy’s can-do attitude, while overall a good thing, needs to be tempered with some hard questions, he added. Saying a mission can be accomplished is only part of the conversation, Rowden said.