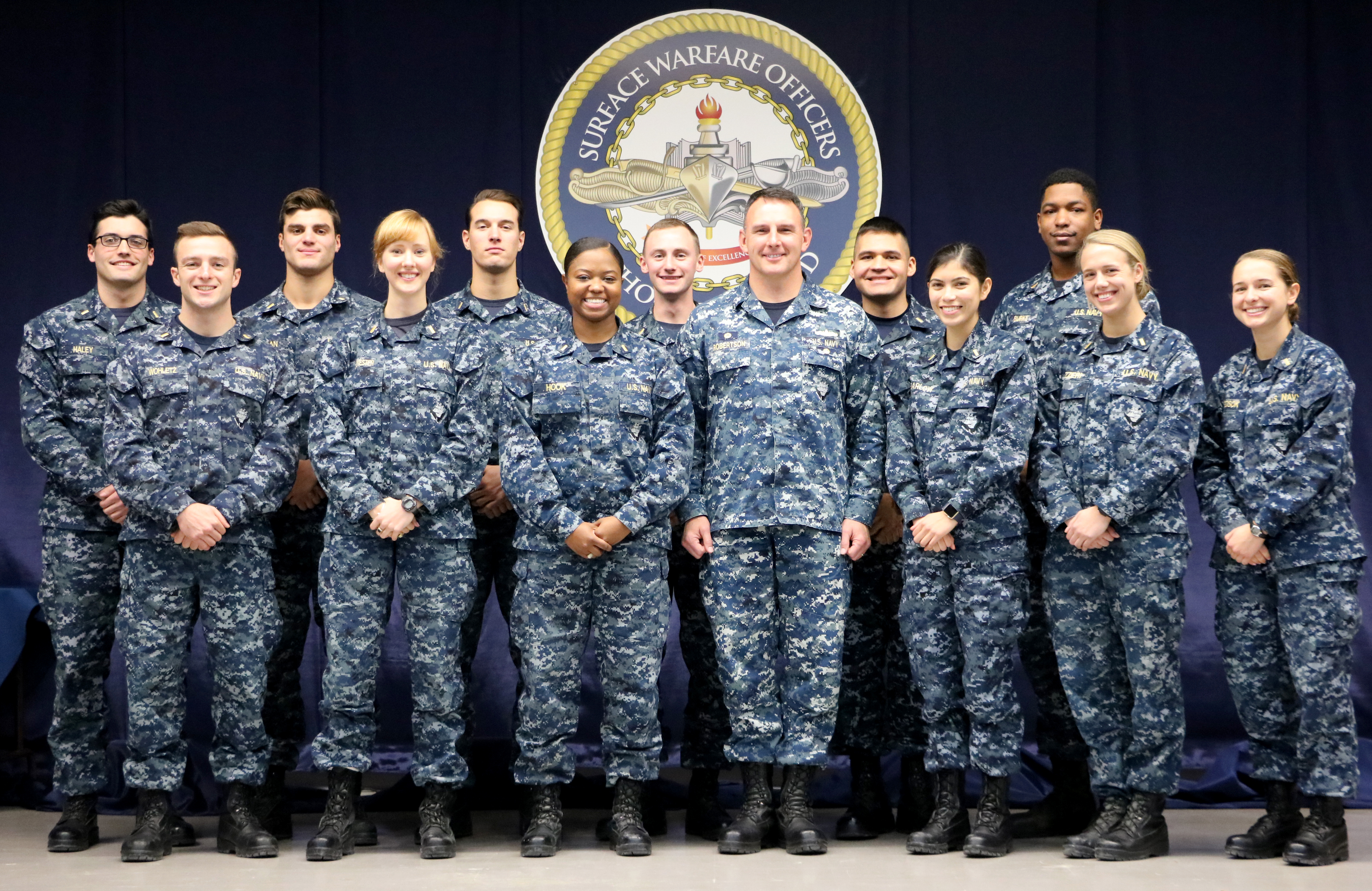 Capt. Scott Robertson, commander of Surface Warfare Officers School (SWOS), poses with the first 12 ensigns to complete the first pilot Junior Officer of the Deck (JOOD) Course. The initial pilot course was designed to build upon the foundational shiphandling skills students learned at the basic Division Officer Course, placing the junior officers in realistic navigation environments they could expect to find themselves in at sea. US Navy photo.

Twelve ensigns completed a pilot Junior Officer of the Deck (JOOD) Course launched in the aftermath of several high-profile surface navy collisions this year and a Comprehensive Review that highlighted the need for additional navigation training.

The ensigns completed this new three-week course on Dec. 15 at Surface Warfare Officer Schools (SWOS) Command in Newport, Rhode Island. The course followed their Basic Division Officer Course, where students learned basic shiphandling skills, and allowed the ensigns to practice those fundamentals as part of a watch team in the SWOS shiphandling simulators before reporting to their first ship.

In the second and third weeks of the course, the students spent two hours in a classroom going over case studies – including the fatal USS Fitzgerald (DDG-62) and USS John S. McCain (DDG-56) collisions this year – and then spending six hours in simulators in navigation environments they could potentially see in their first deployments.

The classroom portion of the JOOD course covered extremis extraction scenarios, weather, tides and currents, navigation aids, rules of the road, the importance of using the Automatic Identification System, the six principles of bridge watchstanding and other basics, Perkins said.

“The classroom portions were further enhanced through 50 hours of hands-on training in the shiphandling simulators. The course progressively moved students from simple ship evolutions to more complex and stressful maritime scenarios through an extended series of ‘reps and sets’ in the simulators,” he said.
“The ensigns started with instructor-led special evolutions focused on individual conning skills, then transitioned to contact management scenarios in benign conditions with student-led bridge teams. As the officers developed proficiency and confidence, more complex scenarios were introduced – including restricted waters transits, heavy traffic density in reduced visibility, and close quarters collision avoidance.”

“I really appreciated the difficult scenarios,” Ensign Liesl Sylvester, who is reporting to USS Wayne E. Meyer (DDG 108), said in a Navy news release.
“Having the opportunity to practice getting out of difficult situations in the simulators after the classroom discussion was one of the best parts of the course.”

The 12 ensigns who participated in the pilot course were selected to represent a diverse group of new officers, Perkins said. The group of ensigns included those who had recently completed their Basic Division Officer Course in both San Diego and in Norfolk, and those who were commissioned through the U.S. Naval Academy, Reserve Officer Training Corps (ROTC) and Officer Candidate School (OCS). This diversity of background was meant to help identify if one group was more or less prepared for the course and the challenges they would face during this more advanced shiphandling training.

The three-week JOOD course is expected to evolve based on student and fleet feedback in early 2018. By mid-2018 it should become a four-week course, and by late 2018 it will be taught in San Diego and Norfolk instead of in Rhode Island. Eventually it will become a six-week course that also includes International Convention on Standards of Training, Certification and Watchkeeping (STCW); Automatic Radar Plotting Aids (ARPA); and Electronic Chart Display and Information System (ECDIS) courses of instruction, according to the news release.

“I am very pleased with the outcome of the JOOD Pilot Course. Over the last three weeks, we immersed these twelve ensigns in our shiphandling simulators – gradually taking them from basic to more complex contact management scenarios. We saw an increase in not only ship driving proficiency, but also in the officers’ confidence as they developed the individual and team skills to deal with more challenging scenarios,” Capt. Scott Robertson, commanding officer of SWOS, said in the news release.
“While our work here at SWOS is far from done, I’m very optimistic with the results of the JOOD Pilot. There are certainly things we need to work on to make the final version of this course even more effective. We will follow these 12 ensigns in the Fleet and look for feedback from their commanding officers about their performance on the bridge compared to their contemporaries who did not have the benefit of this new training.”

Perkins said SWOS is now working with fleet concentration areas to identify what local facilities and simulators are available to teach the course in the second half of 2018.

U.S. Fleet Forces Command commander Adm. Phil Davidson, who led the comprehensive review of surface force readiness after the Fitzgerald and McCain crashes, said at an all-hands call in Norfolk last month that his team found sailors were deficient in two key fundamental areas: “the actual application of the rules of the road, COLREGS, what to do, when to do it; both in planning, preparing and executing in the heat of the moment,” and in team cohesion. The JOOD course’s structure could help address both, since it focuses on fundamental operations in a watch team environment in the simulators.

Davidson said at the all-hands call that he wanted more – and more rigorous – formal training and assessments at each step along a surface warfare officer’s career progression, and that the Navy would likely make an investment in additional simulators at SWOS and at the waterfront.