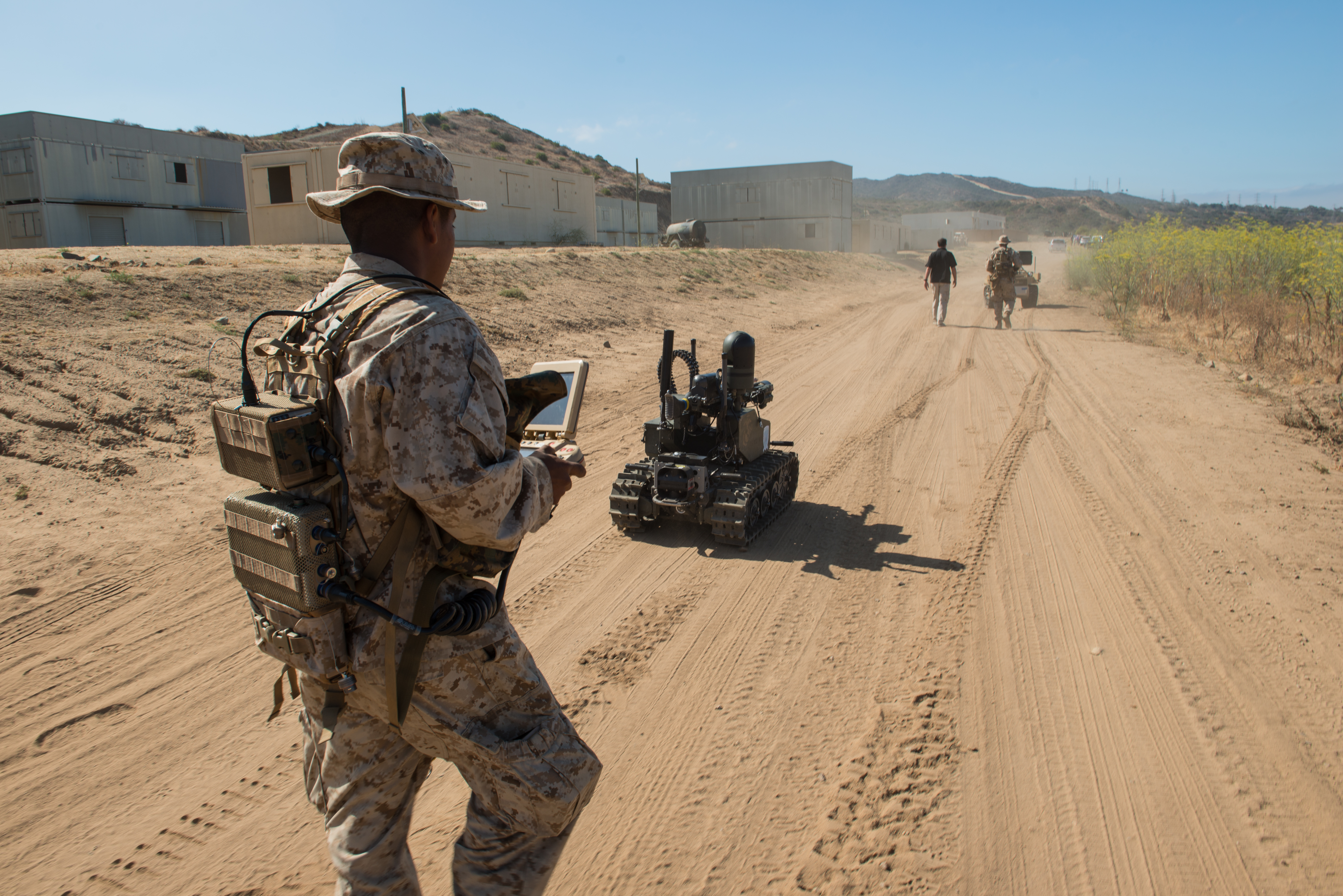 The Marine Corps Warfighting Lab has created a Non-Commissioned Officer Fellowship to bring young enlisted Marines into the lab and leverage their tech-savvy and adaptive approaches to warfare to shape future experiments.

MCWL has 16 NCOs in the fellowship today to support an upcoming Urban Technology Demonstration and intends to bring in as many as 20 more in the next cohort. This fellowship is meant to tap the knowledge and creativity of the enlisted Marines, as well as ensure that, if the future brings a distributed small-unit fight as is predicted, the small unit leaders are the ones shaping how to win that fight.

“What we keep finding is, in so many ways, our younger generation of Marines is already out ahead of us, whether it’s technology or it’s concepts. And we found ourselves accidentally – because you can’t avoid a good idea – harnessing their ideas and trying to bring them to fruition here,” Lt. Col. Dan Schmitt, field testing branch head at MCWL, told USNI News in a Dec. 6 interview.
“They might be a rifleman in the third squad, but they’re into racing drones, and the next thing you know you have a world-class racing drone concept that can be fully developed just by incorporating the bottom-up feedback. So it’s a bit of a merging of generations in a way that we’re not really used to. Our young Marines, not only are they steeped in the traditions and the history of the service but they’re also bringing the quick-changing adaptive modern world into it, and we’re formalizing the harnessing of that.”

So far, Schmitt said, the results have been impressive.

“You get a guy with a great technical idea in electronic warfare but he’s not educated in it, and you put him with the labs where the scientists are, and you put your chocolate and peanut butter together and it’s much better than each one of them alone. Once we started seeing that, we starting using couch change to pay for it, and we scraped up that change, paid for those first few … and got some immediate successes out of it, which gave us more confidence as an institution to say this is really harnessing these guys’ ideas,” he said.
“We don’t know where it’s going to take us, but we know it’s going to be good.”

Capt. Eric McCrery, a project officer at MCWL, said the first couple NCO fellows were found more informally, but their six-month stints at the lab were so successful MCWL was able to make the argument for a formal and funded fellowship.

“The first one was two summers ago, so July/August of 2016 we came across a sergeant who was very savvy with information operations, very good at creating very compelling videos that we applied in tactical situations to replicate kind of what some of our adversaries are using today on social media. So we found him and basically brought him to the lab to work for us,” McCrery said.
“Since then we had two more NCOs through the winter and spring time: one specialized in additive manufacturing, creating small UAS (unmanned aerial systems) or drones, and then one is kind of a cyber guru. So all three of those were very ad hoc-ish, we just coordinated with those commands and brought them in and the lab paid for them. However, within the last couple of months we actually professionalized the fellowship with the Office of Naval Research and basically we will be sending a MARADMIN, which is just an official memo to the rest of the Marine Corps, for NCOs to apply, and then when we select those individuals – up to 20 within a six-month timeframe – they will come to the lab and through the Warfighting Lab and ONR we will help them with whatever projects they want to work on. Anything from autonomous systems to weapons systems to UAS, big data, really anything that’s tactically applicable to the Marine Corps.”

Schmitt said the current 16 fellows were selected based on the topics they were passionate about and also their relevance to a future urban fight, to support the Urban Technology Demonstration planned for the spring at Marine Corps Base Camp Pendleton, Calif. The next cohorts will be selected with a particular emphasis on two areas: integrating artificial intelligence, machine learning, and manned/unmanned teaming in support of distributed logistics; and leveraging the information environment at the tactical edge. Those not selected for the fellowship can also contribute ideas online via chatrooms and forums, he said.

Beyond simply bringing good ideas in to support Marine Corps experiments, acquisition and tactics, Schmitt said the creativity of these Marines has actually proven to be predictive of how a non-state adversary may approach building weapons to use against the United States, through commercial products bought online. 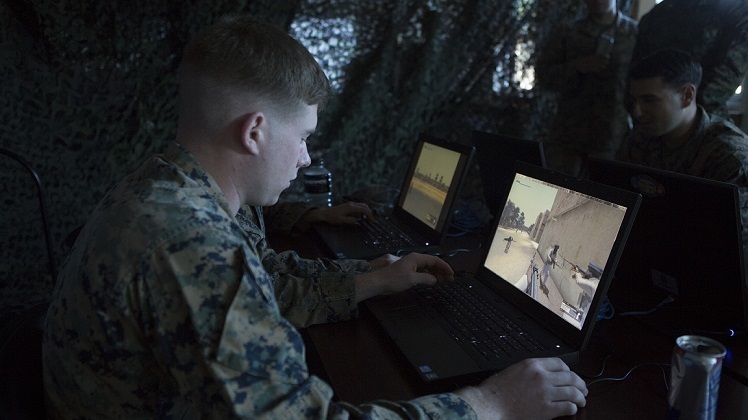 When the current fellows arrived at the lab, Schmitt said they were instructed to build an army of weaponized systems with off-the-shelf materials.

“In many cases provided an 80-percent solution to some of our capability gaps right now, and they were able to employ it in live-force experimentation. And in many regards it was an asymmetric capability because they were able to get a lesser solution but they could get it now, which is sometimes better than the full solution getting there later,” Schmitt said.
“We learned a lot of lessons about how we can incorporate off-the-shelf or emerging technologies into our normal programmatics for end items. We now have an ISO container full of things – drones and cords and cables and screens – that they were able to put together, but the real lesson is, what did the material or tangible items teach us about how we think?”

“If you take American Marines and you give them a credit card and Amazon, they will be more creative and more comprehensive in building an off-the-shelf system of weapons or weaponized systems than our adversaries will, because they grew up in a world where they were already connected and federated, they come up with foundational education already, which the rest of the world can’t necessarily enjoy. So what we found was that what our Marines do when given that freedom and that creative license, what they do is they predict what our enemies might do in the future,” Schmitt continued.
“We can predict what the enemy’s natural adaptation pattern would look like, and we also believe we have an asymmetric advantage by exploiting the competence of the individual Marine.”

Master Gunnery Sgt. Brian Lahr, the senior enlisted advisor at MCWL, said in the interview that “the biggest thing about this program is it gives enlisted Marines a voice, because a lot of times in your station, whether it be Camp Lejeune, Camp Pendleton, Okinawa, you feel like, if only someone would listen to me. So this is a golden opportunity for a young Marine, whether it be a private first class to a sergeant or whatever rank it might be, to actually make changes throughout the whole Marine Corps. So it’s a golden opportunity to get a Marine’s ideas out, and hopefully we can implement them in the future.”

Lahr and McCrery both noted that MCWL and the Marine Corps are planning for a future fighting environment where Marines will operate in small teams distributed across a wide area. A sergeant could very well be the most senior Marine in a fight, so MCWL wants to not only set up that sergeant for success but also incorporate his natural creativity and technical knowledge in shaping how he would win that fight.

“A lot of people here think the future of warfighting, the nature of that is going to be much more decentralized, which means we need to empower at the lowest,” McCrery said.

“Echo what Capt. McCrery said: definitely in the future it’s going to be more of NCO small wars, we think, compared to major World War II (battles) or something of that nature,” Lahr said, “so we’ve got to definitely reach into our young Marines because they will be operating alone and unafraid, so we need to get them the tools that will make them successful.”