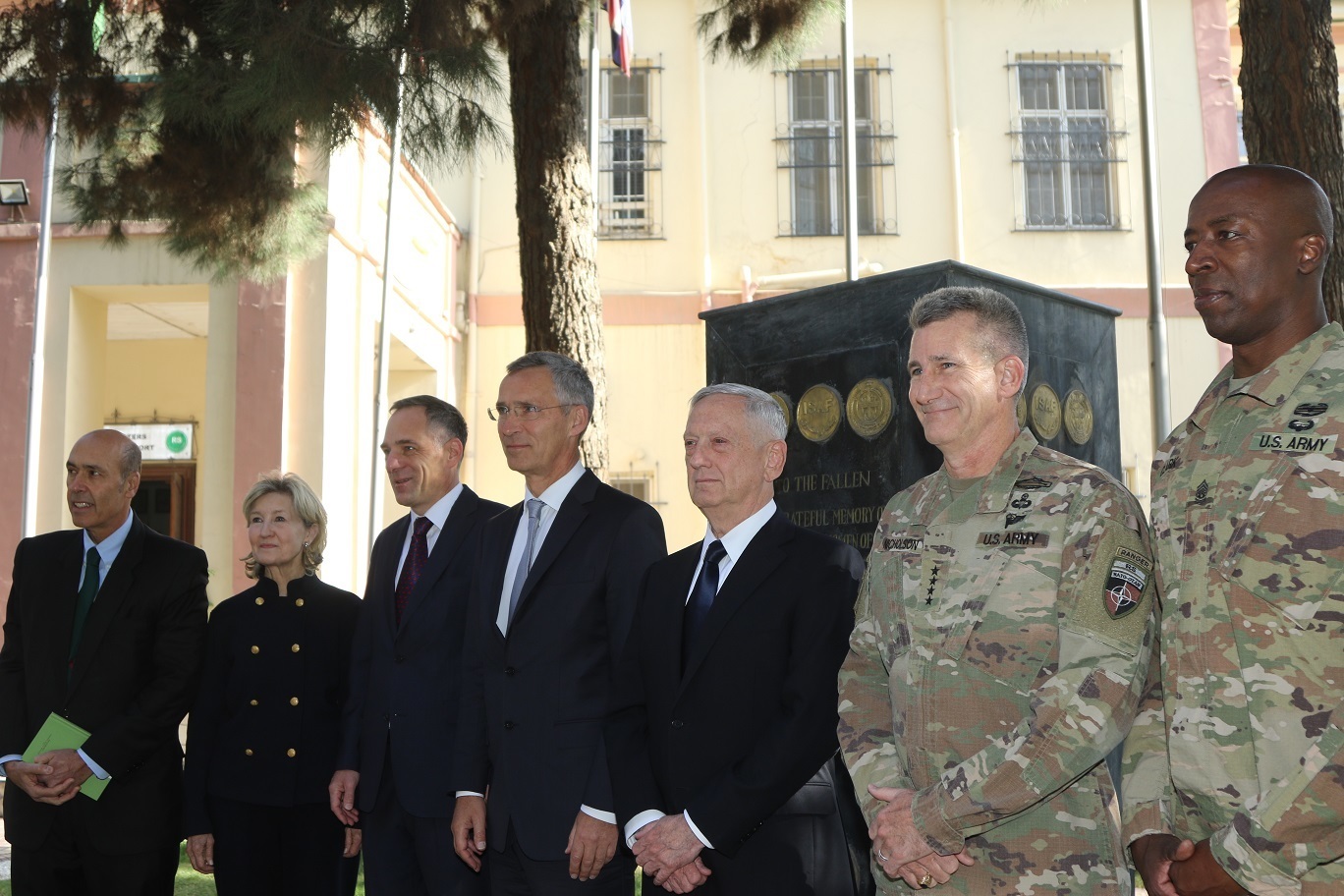 NATO Secretary General Jens Stoltenberg visited Afghanistan with the US Secretary of Defense James Mattis. The two met with President Ashraf Ghani and Chief Executive Abdullah Abdullah and other high-level officials. Discussions focused on the NATO-Afghanistan partnership, including the ongoing NATO-led Resolute Support Mission in support of the Afghan National Defense and Security Forces. DOD photo.

The defense secretary and chairman of the Joint Chiefs of Staff told a Senate committee today that the war in Afghanistan is not yet near a point of resolution but that there are “clear and achievable” goals in the near-term.

Speaking at a Senate Armed Services Committee hearing, Joint Chiefs chairman Marine Gen. Joseph Dunford said that a victory after 16 years of war in Afghanistan would be “convincing the Taliban they cannot win on the battlefield; we can do that.” However, he said when asked, “we are not at the point where we can bring a successful resolution to this war.”

Dunford outlined the Trump Administration’s “conditions-based strategy” for Afghanistan, saying that there was no set time for the U.S. and partner nations to reduce their support for the government of President Ashraf Ghani. In the past, he said, the Taliban used the announced timeline as propaganda, saying the Americans would be leaving for good and the Taliban would resume control. Dunford said this led to “hedging behavior” by Afghans and regional partners, who wanted to support government in Kabul but weren’t sure what would happen when U.S. forces pulled out.

Dunford added that, in addition to not announcing timelines, the U.S. military would not repeat its previous mistake of drawing down troop levels “too far and too fast.”

He added the United States and allies are regarded by the Afghan people as “anything but an invading force” and that opinion polls show both their rejection of the Taliban’s objectives and strong support for their security forces.

Defense Secretary James Mattis noted progress within the Afghan military and government, saying “there has been a wholesale swap-out” of officials who have been judged incompetent or corrupt in the Afghan administration. Those in place now are “not colored by the old way of doing business,” which was marked by reports of bribery, theft and “ghost troops.”

He said that, as part of the new military strategy, all six regional Afghan Army corps are engaged in offensive operations against the Taliban and its ally, the Haqqani Network. Those army units are being backed by an increased number of NATO air strikes. The rules of engagement covering air operations also have been expanded under the new strategy.

Between the change in air operations and an increase in U.S. advisors helping Afghan combat units, the Afghan security force blunted the Taliban’s spring and summer offensive and has seen a decrease in casualties.

Mattis said in his opening statement, “war is principally a matter of will, and the international community is making clear that it will stand alongside the Afghans’ commitment to this fight.”

Other promising developments are on the horizon. Dunford said the expansion of air operations with Afghan helicopter and fixed-wing crews and special forces in the Afghan army; the expansion counterterrorism efforts not only by the U.S. but from China, Russia, India and Pakistan; and the Afghan government’s new crackdown on corruption were “objectives that are clear and achievable.”

Describing the pressure the United States will be putting on Pakistan to stop providing safe havens for terrorist organizations, Mattis said the idea is to put Islamabad in a position where “it can see where their interests converge with the international community’s.”

He acknowledged that Pakistan has suffered high casualties battling terrorists inside its borders, and the government has indicated a willingness to cooperate with others in eliminating these sanctuaries used to attack Afghanistan and India.

Mattis added that despite any positive cooperation with the Pakistani government, “ISI [Pakistani intelligence services] appears to run its own foreign policy.”

Mattis said the United States’ approach to safe havens in Pakistan and elsewhere, such as ungoverned areas in Syria and North Africa, is to work “by, with and through our allies. There’s a way for us to lead … without putting the full burden on the American taxpayer.”

Chairman John McCain, (R-Ariz.), said it was “unacceptable” that “this committee and the Congress more broadly still does not know many of the crucial details of this [new] strategy” after 16 years of combat with more than 2,000 casualties. “In short, at present, it remains unclear why we should be confident that this new strategy could turn the tide in Afghanistan” from stalemate, he said.

When he asked committee members to raise their hand if they had been briefed on the strategy, no one did.

Pressed by other senators to go into more detail about the strategy, Mattis said he would not do that in a public hearing but was willing to meet with committee members privately or with the committee in closed session to discuss it.

Mattis did say the strategy would send about 3,000 additional trainers and advisors, as well as some aviation maintainers into Afghanistan, and that President Donald Trump “is open to me coming back in” to discuss troop levels and other support as needed.

Dunford put the cost of operations in Afghanistan this year at $12.5 billion, about $5 billion of which would pay for Afghan security forces. Allies are contributing $1.1 billion to the support of the security forces.