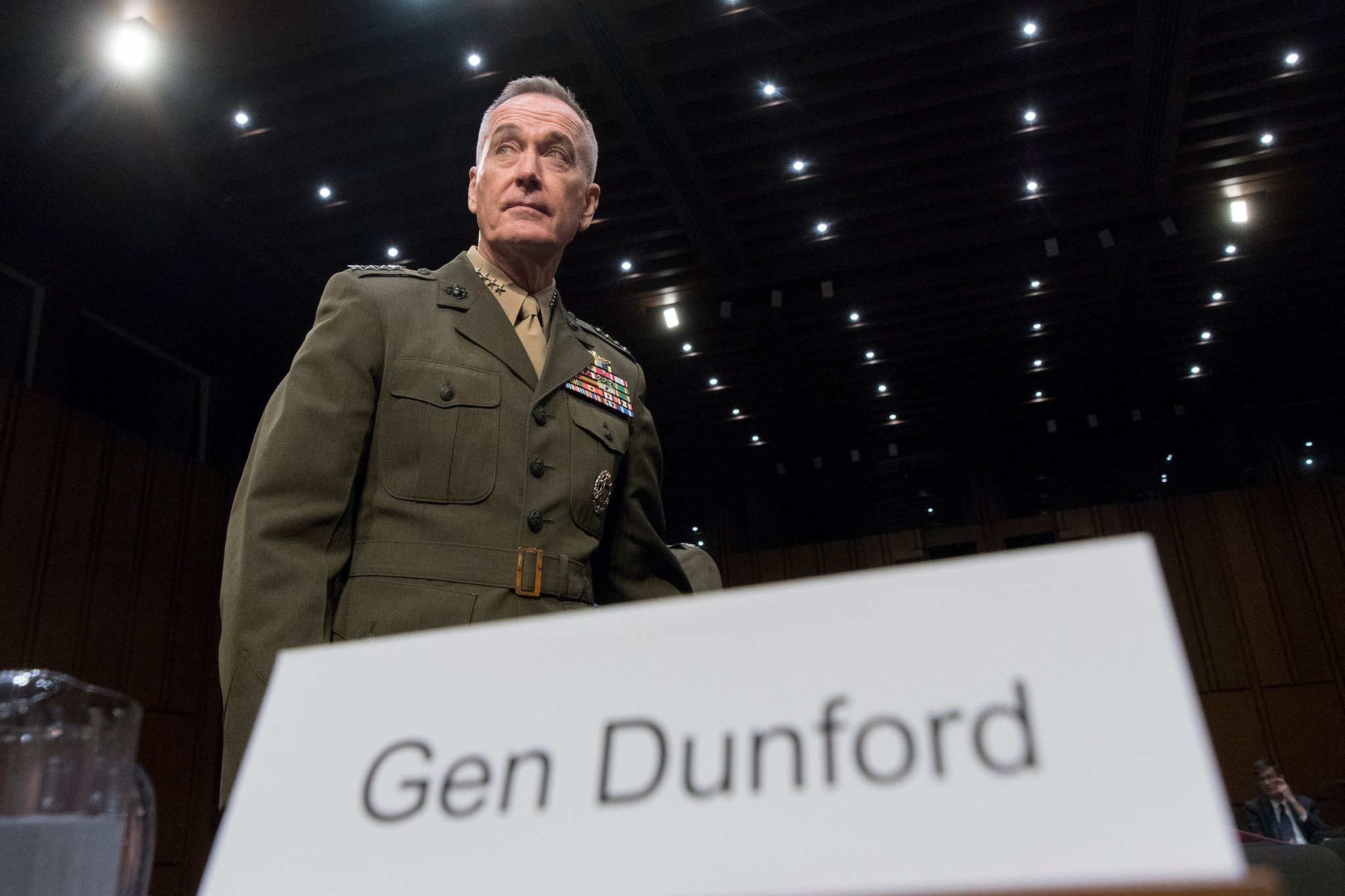 Congressionally-imposed spending caps for training and defense modernization and a spate of accidents are challenging the military’s ability to project power to potential adversaries, said the nation’s top military leader Tuesday.

Speaking at his reconfirmation hearing, Marine Gen. Joseph Dunford, chairman of the Joint Chiefs of Staff, said North Korea, Iran, China, Russia, and non-state actors represent the most credible threat to possibly challenge U.S. military supremacy at sea, in the air and on land.

Meanwhile, because of a high operating tempo caused by a demand for the military to do more with less training and fewer resources, non-combat deaths are now higher than operational fatalities, Dunford said. He cited the recent at-sea collisions in the Pacific that resulted in the death of 17 sailors and a training exercise at Camp Pendleton, Calif. that injured 14 Marines and a sailor as recent examples of such non-combat deaths and injuries.

“At present, the joint force is shaped appropriately to achieve success against our adversaries,” said a written statement submitted by Dunford answering Senate questions before the hearing. “However, U.S. overmatch in global power projection and our current precision, long-range, stand-off, and manned capabilities have diminished as our adversaries’ Anti-Access and Area Denial capabilities have increased. Aging logistics infrastructure (i.e. roads, rails, ports, bases), along with an increasingly brittle defense industrial base have long-term consequences that limit our ability to sustain a protracted or simultaneous conflict. We must continue to make adjustments and adapt the force to remain competitive.”

The Department of Defense is addressing the accidents and readiness issues, Dunford said during the hearing, by “managing risk in a different way.” Instead of relying on a bottom-up establishment of requirements, the Pentagon has adopted a top-down process “to generate readiness” meaning more time for training and maintenance and “sustain the force” by re-evaluating operational procedures. 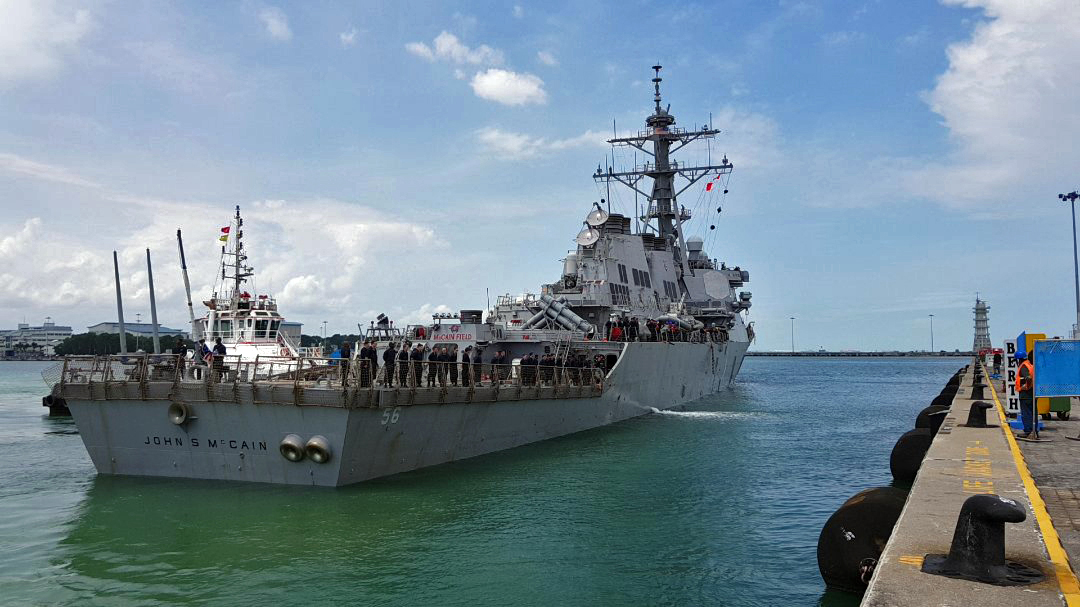 Dunford said having a ship’s crew devoting “70 percent of the time underway [solely to operations] is unsustainable” in terms of keeping their own readiness levels high and meeting necessary maintenance requirements.

Chairman Sen. John McCain, (R-Ariz.), said the common practice of “100-hour work weeks” for sailors was a factor in the high deadly accident rate. Meanwhile, McCain said aviation mishaps were caused by pilots seeing their flying time reduced limiting their ability to gain experience in what to do in an emergency.

With a current fleet 279 ships, McCain said meeting the regional commanders’ increased requirements means creating a high operating tempo. “The Navy is smaller than it needs to be,” McCain said. The Pentagon and the administration have stated their goal of a 355-vessel fleet could match these regional commanders’ demands, but added building such a fleet will not be easy. 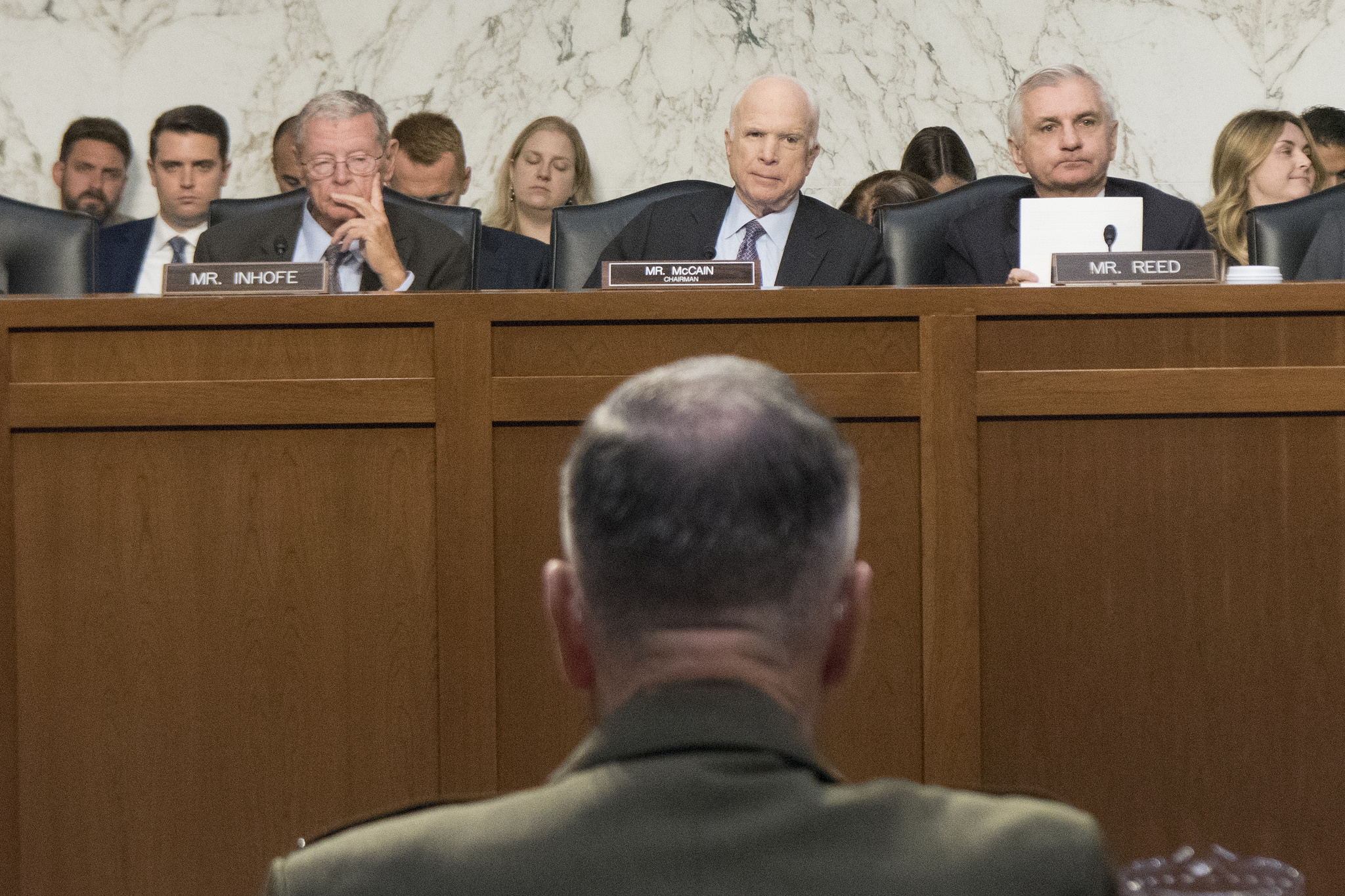 Yet the threats posed by other nations are real, and Dunford said the Joint Chiefs “don’t have the luxury of looking at [threats] linearly.”

North Korea, with its ballistic and nuclear weapons testing, presents the greatest “sense of urgency” threat, Dunford said. But when threats are assessed from a different angle, Russia’s threat is its overall capability today, and by 2025 the threat would be China’s overall capability.

The military option to respond to North Korea is there, but Dunford said Secretary of State Rex Tillerson is leading the way diplomatically and economically to rein in Pyongyang’s military ambitions.

Dunford said United States military leaders “had a conscious” position “to make no statement” that could cause a miscalculation by North Korean leaders in a crisis that has seen escalating hot rhetoric between President Donald Trump and North Korea’s Kim Jong-un over nuclear weapons and missile testing.

“We are informed by the need to avoid miscalculation,” Dunford said. But when answering another question, Dunford conceded the difficulty avoiding such a miscalculation, because currently there is “no direct military-to-military communication” between North Korea and the Pentagon.

When asked whether an American pre-emptive strike would cause North Korea to change its behavior, he said, “We shouldn’t assume we can control escalation” that likely would include retaliatory artillery and missile attacks on metropolitan Seoul with its population of 25 million.

About 30,000 American service members are stationed on the peninsula, many with their dependent spouses and children, and roughly 250,000 Americans work in Seoul.

If Pyongyang carried out its threat to conduct an atmospheric nuclear weapon test, Dunford said in military terms, the U.S. and other nations would regard this as “an incredibly provocative thing.” Long-term, though, such an act would pose long-range global health effects like those following the Chernobyl and Japanese nuclear power plant failures.

Dunford said the intelligence community judges North Korea’s missile and nuclear weapons programs as tools to secure the regime and not to try to conquer South Korea. Still, the U.S. has “taken steps to protect allies” with such systems as the Theater High Altitude Area Defense in Korea and the possible stationing of it or Aegis Ashore in Japan.

“We should assume now North Korea has the capability now” to fire an intercontinental ballistic missile that could hit the United States mainland, “and they will use that capability,” Dunford said. As to how effective they are now in doing that or fitting a nuclear weapon on those missiles, he said, were problems their engineers are working on.

The missile defenses now in place are sufficient to meet Pyeongyang’s current threat to Seoul, Tokyo, Hawaii, and the continental U.S., Dunford said. The 21 interceptors the U.S. military is adding to the missile shield protecting the American mainland are designed to address North Korea’s growing capability and capacity, Dunford added.

For future defense, “we don’t have that capability right now” to use unmanned aerial systems to destroy ballistic missiles in their boost phase from either North Korea or Iran, Dunford said.

Dunford wrapped up his comments giving an assessment of some of the threats the military faced in Middle East. Governments in Iran, Iraq, Syria, Afghanistan, Pakistan, Turkey and Russia are all jockeying for influence in the region, are dealing with non-state actors, and have interests that don’t necessarily align with each other or U.S. interests.

He was clear about not getting out in front of the president by commenting on Iran’s compliance with the nuclear agreement. Dunford reminded the committee the pact did not cover Tehran’s missile or cyber programs nor did it address Iran’s support of proxies such as the Houthis in Yemen and Hezbollah in Syria.

“Syria right now is where [Iran] has increased” its presence and influence, Dunford said. Tehran is working with Moscow to shore-up the Bashar al-Assad regime in an ongoing multi-sided civil war. The result of this cooperation is Islamic State is losing ground in Syria, and also in Iraq.

But as Islamic State rebels pull back, efforts to root out the rebels are being complicated, Dunford said by a non-binding vote for independence in Iraq’s Kurdistan region. The Kurds, who claim the area in Northern Iraq near Kirkuk – an area rich with oil fields – have supplied forces to battle Islamic State forces in the area.

Dunford is concerned about how the fallout from vote could cause the governments in Iraq and neighboring Turkey to not be as cooperative with Kurdish forces. Both Iraq and Turkey oppose an independent Kurdistan.