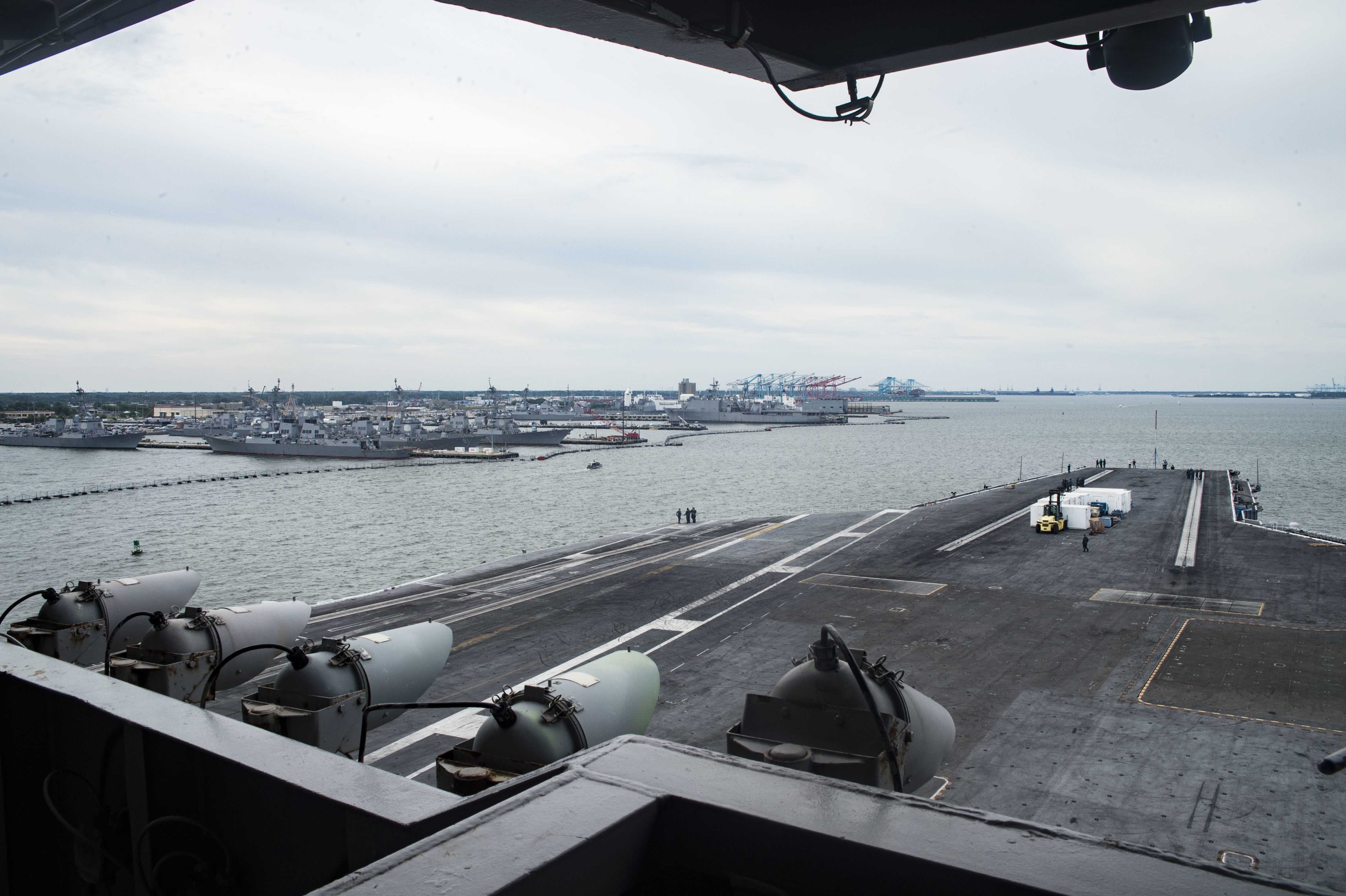 The aircraft carrier USS Dwight D. Eisenhower (CVN 69) departs Naval Station Norfolk for the transit to Norfolk Naval Shipyard in Portsmouth, Va. The ship is preparing for a planned incremental availability at Norfolk Naval Shipyard during the maintenance phase of the Optimized Fleet Response Plan. US Navy photo.

The ship departed for the public shipyard well in advance of the start of its maintenance work – to allow for a 10-day early start, with 30 days of additional preparation time at the yard – in a bid by Naval Air Forces Atlantic to keep its carriers on track or early in maintenance, training and deployment milestones.

“The Ike crew has worked hard over the past two years, and it is time to focus on maintenance, repairs and updates to enable future operational capability,” Capt. Paul Spedero Jr., Ike’s commanding officer, said in a Navy news release.
“Maintenance and modernization are as important as other mission areas, as it ensures the service life of the aircraft carrier. In order for us to meet the needs of our country, we must be able to maintain our warships at the highest level of material condition so that we can remain mission ready.”

Eisenhower deployed from June until New Years Eve 2016. From January to July, the carrier was kept at a high level of readiness – since technically it could be sent on another deployment in a crisis during its so-called “sustainment phase” – and any problem that arose with the ship was promptly addressed. Lindsey told USNI News that this high level of material readiness has led to a more manageable work package for Norfolk Naval Shipyard to take on.

Still, the carrier is turning 40 years old this fall, and Lindsey admitted Ike’s work package is more complex than Truman, which just completed its own PIA two days early.

“Just about every segment and function of the ship will be affected in some way during the PIA,” Ensign Frank Garcia, Ike‘s assistant maintenance manager, said in the news release.
“These repairs consist of ship alterations and ship changes ranging from electrical distribution to berthing rehabilitation. PIA is expected to consist of about 419,419 man-days worth of work, equivalent to 3,355,352 contractor and ship’s force man-hours.” 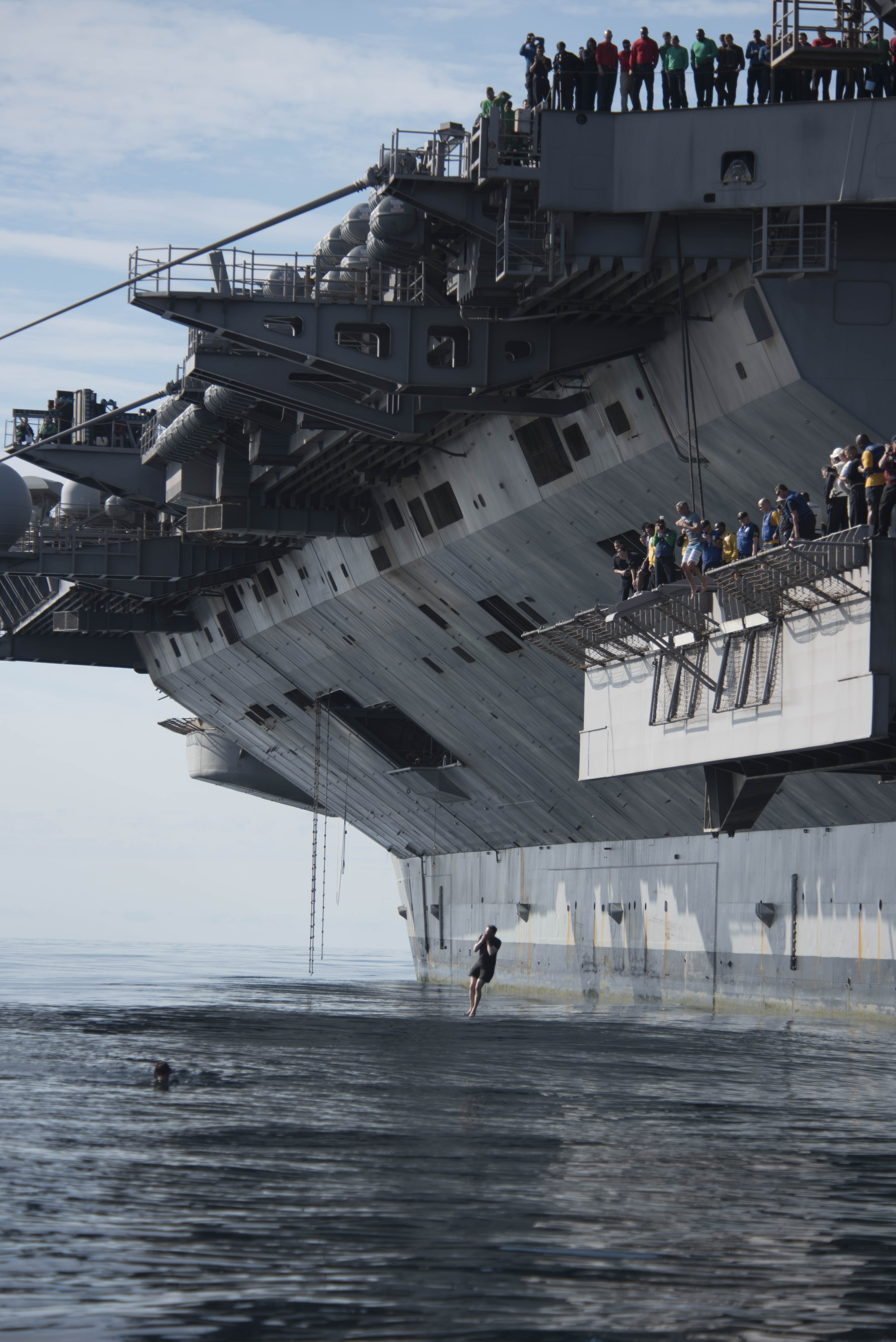 Capt. Paul D. Spedero Jr., commanding officer of the aircraft carrier USS Dwight D. Eisenhower (CVN 69), jumps from an aircraft elevator during a swim call on Aug. 2, just before the carrier headed to the shipyard for a six-month maintenance availability. US Navy photo.

This PIA will help ensure Eisenhower is combat-ready, with up-to-date warfighting systems, going into the final decade of its life. The carrier should complete the maintenance availability in the spring.

“When we arrive at the shipyard, many of our roles and duties will change as we transition from an operational to maintenance environment,” Garcia said in the news release.
“The integration and execution of our routine work and maintenance will prove to be a challenge in the upcoming months but with our crew coming together as a team, staying engaged, and looking out for one another, we will be poised and ready to finish this availability successfully.”