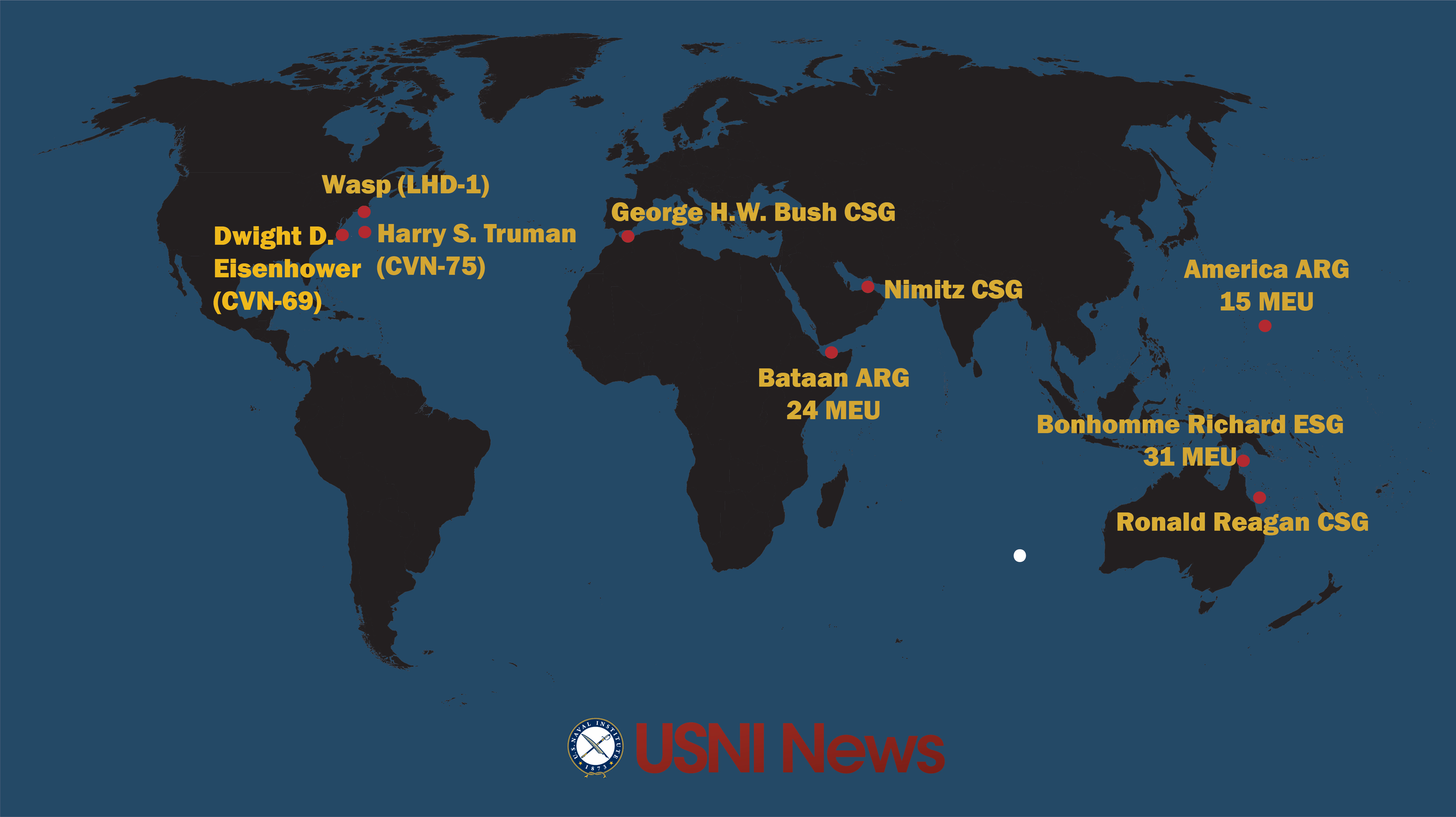 These are the approximate positions of the U.S. Navy’s deployed carrier strike groups and amphibious ready groups throughout the world as of July 24, 2017. In cases where a CSG or ARG is conducting disaggregated operations, the map reflects the location of the capital ship. 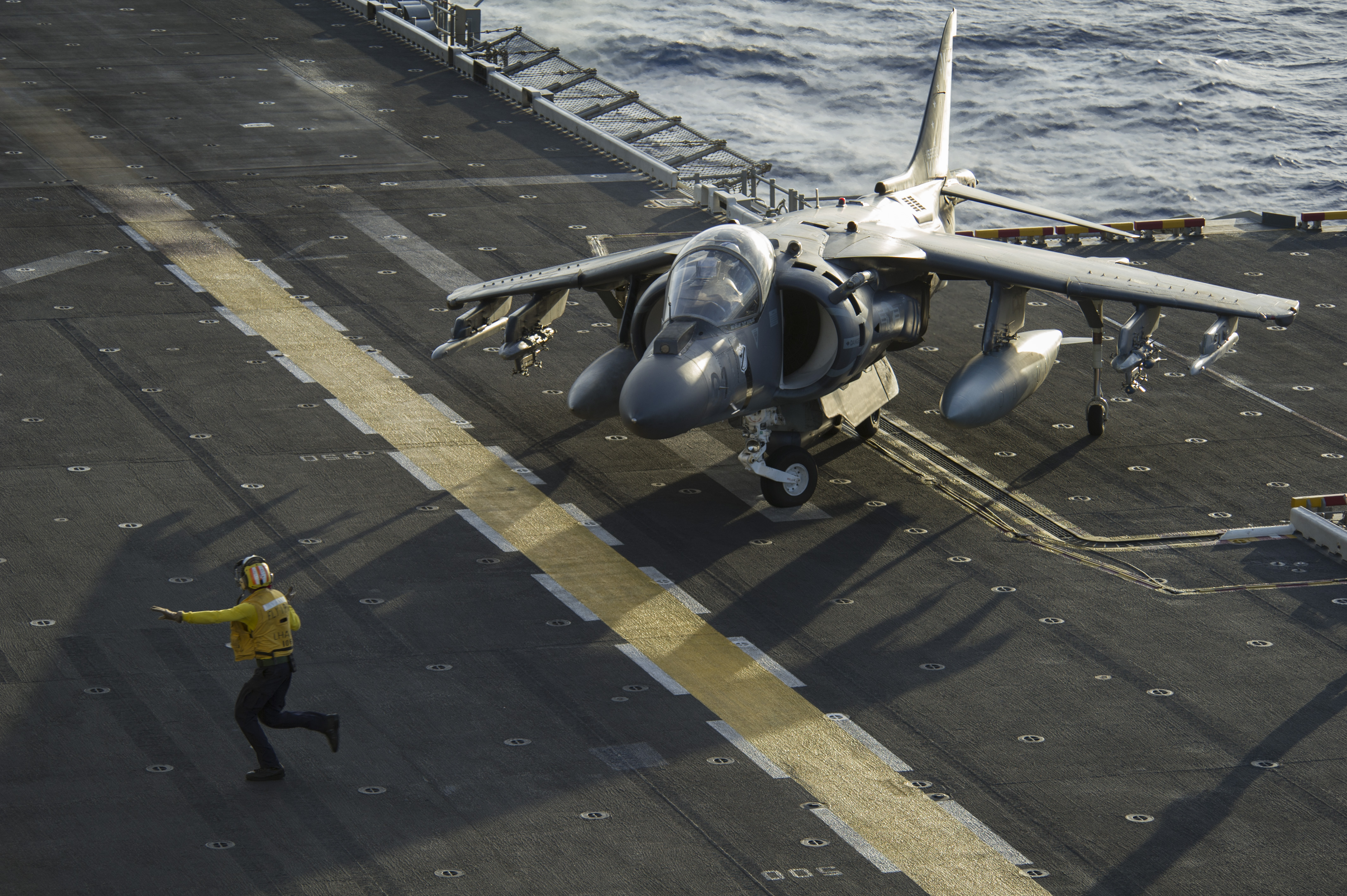 The America Amphibious Ready Group (ARG) and 15th Marine Expeditionary Unit (MEU) continue west. They have crossed the International Date Line and chopped into the 7th Fleet area of responsibility. With its headquarters in Yokosuka, Japan, the 7th Fleet is the Navy’s forward operational fleet in the western Pacific and a large portion of the Indian Ocean.

Ultimately, the America ARG/15th MEU will relieve the Bataan ARG in the Middle East.

U.S. and Royal Australian Navy ships from the Ronald Reagan Carrier Strike Group and the Bonhomme Richard Expeditionary Strike Group are underway in formation as part of a combined amphibious force during Talisman Saber 17 on July 22, 2017. US Navy Photo 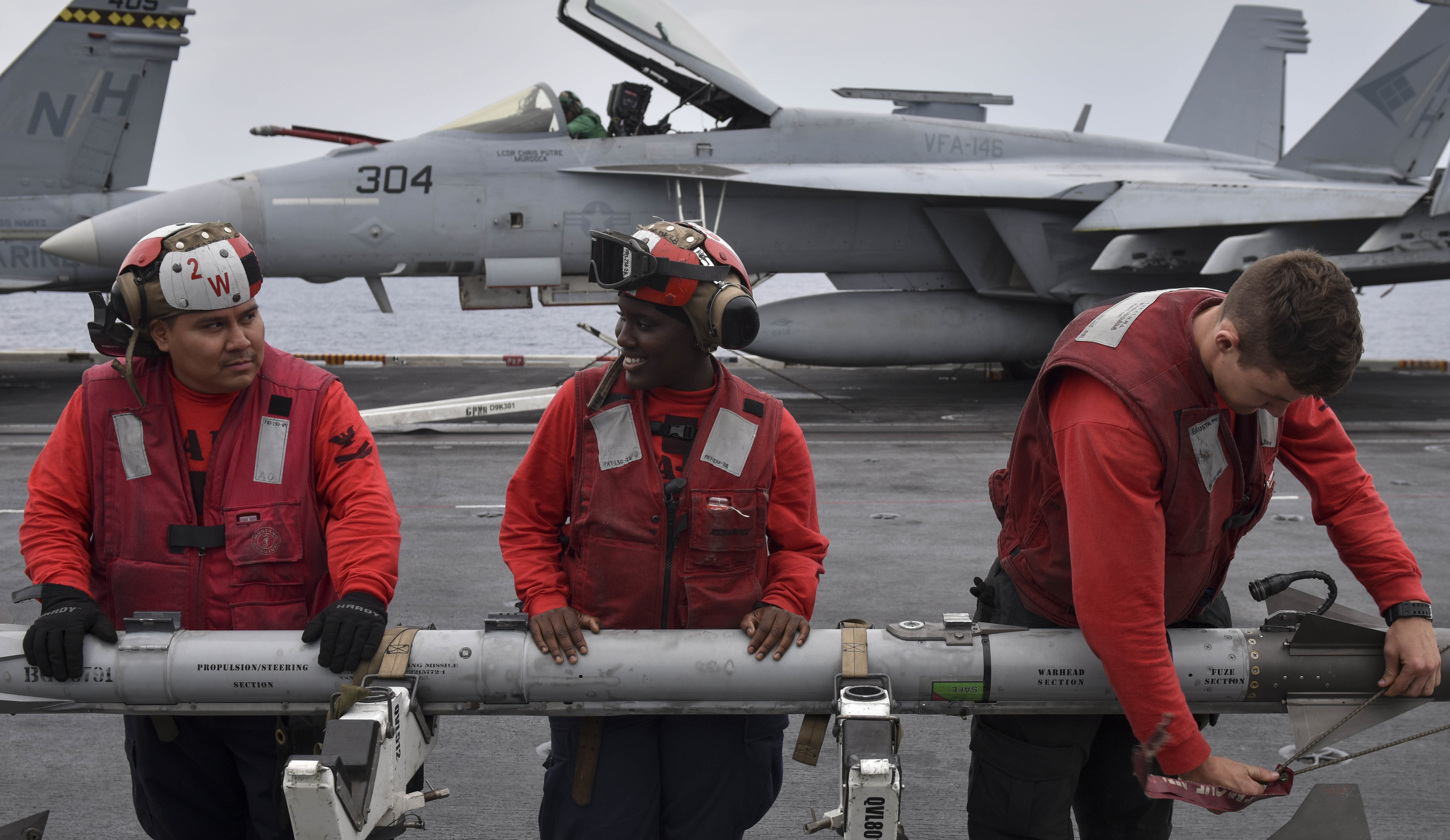 The Nimitz Carrier Strike Group has now chopped into the U.S. 5th Fleet area of responsibility and is inside the Persian Gulf. The Nimitz CSG is in position to conduct anti-ISIS strikes in Syria and Iraq. This places an aircraft carrier in the Gulf for the first time since May 29.

With its headquarters in Bahrain, U.S. 5th Fleet is the Navy’s component commander for U.S. Central Command.

In the Gulf of Aden, Red Sea 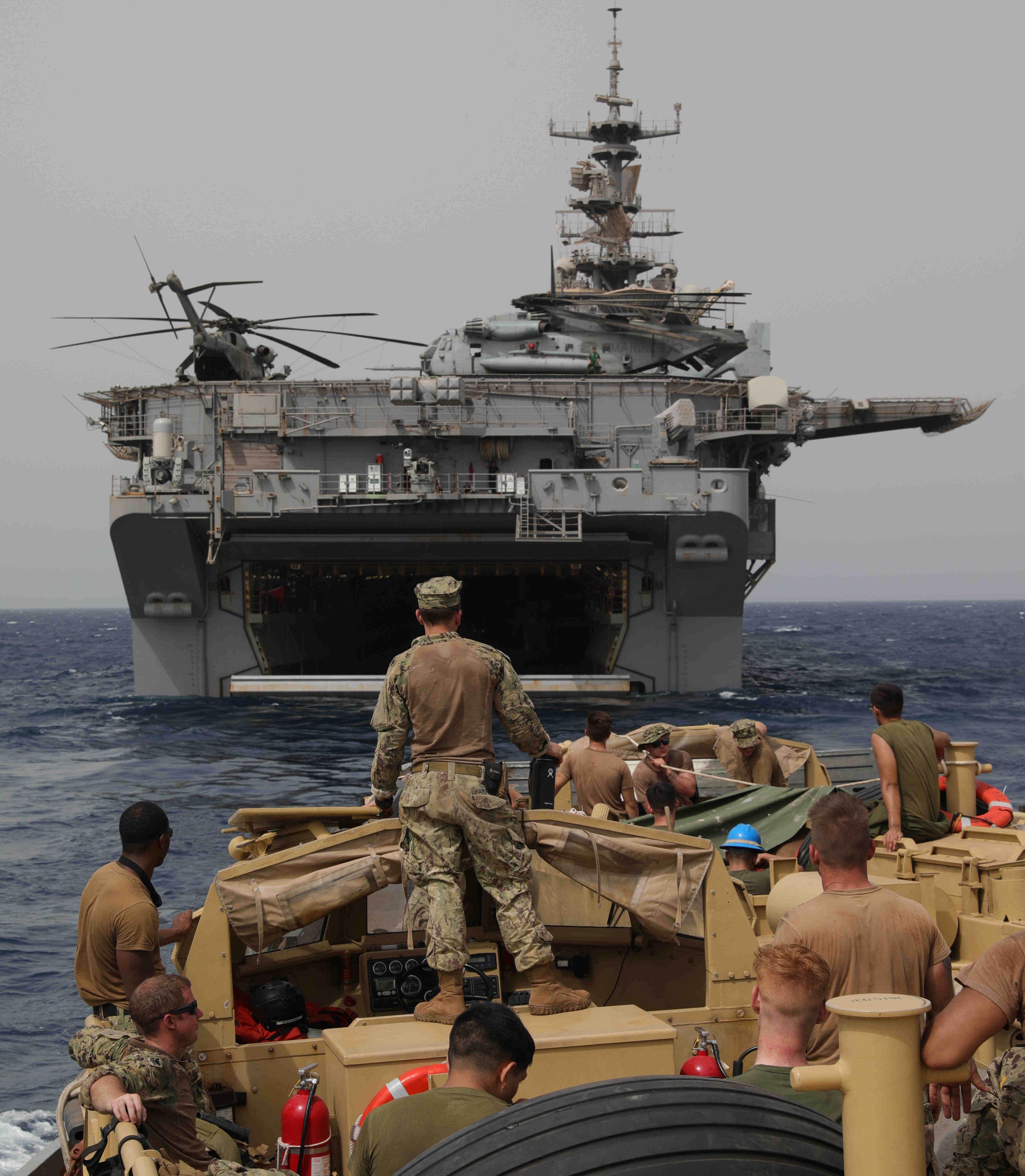 The Bataan Amphibious Ready Group with the 24th Marine Expeditionary Unit is operating off Yemen. The Bataan ARG/24th MEU has been in theater in March. The America ARG – currently in the Western Pacific – deployed July 7 from San Diego and will ultimately relieve Bataan ARG in the Middle East.

In the Strait of Gibraltar 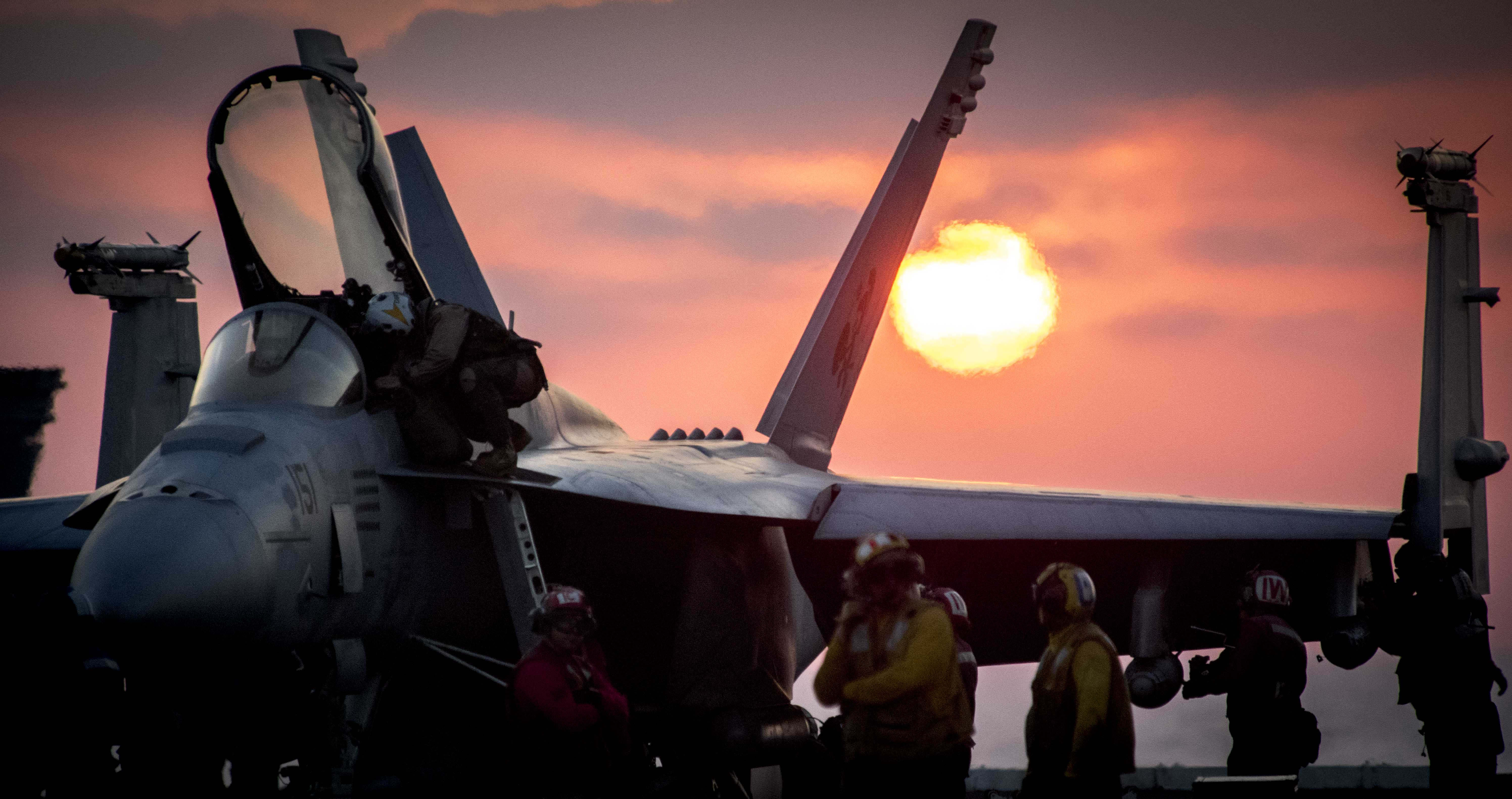 Sailors perform post-flight checks on an F/A-18E Super Hornet attached to the “Tomcatters” of Strike Fighter Squadron (VFA) 31 on the flight deck of the aircraft carrier USS George H.W. Bush (CVN 77) on July 20, 2017. US Navy Photo

The George H.W. Bush Carrier Strike Group is transiting the Strait of Gibraltar and is headed west. The CSG has completed operations in the eastern Mediterranean, where it was conducting anti-ISIS air strikes. USS George H.W. Bush (CVN-77) has a port call planned in Portsmouth, U.K., before arriving at its homeport at Naval Station Norfolk, Va. 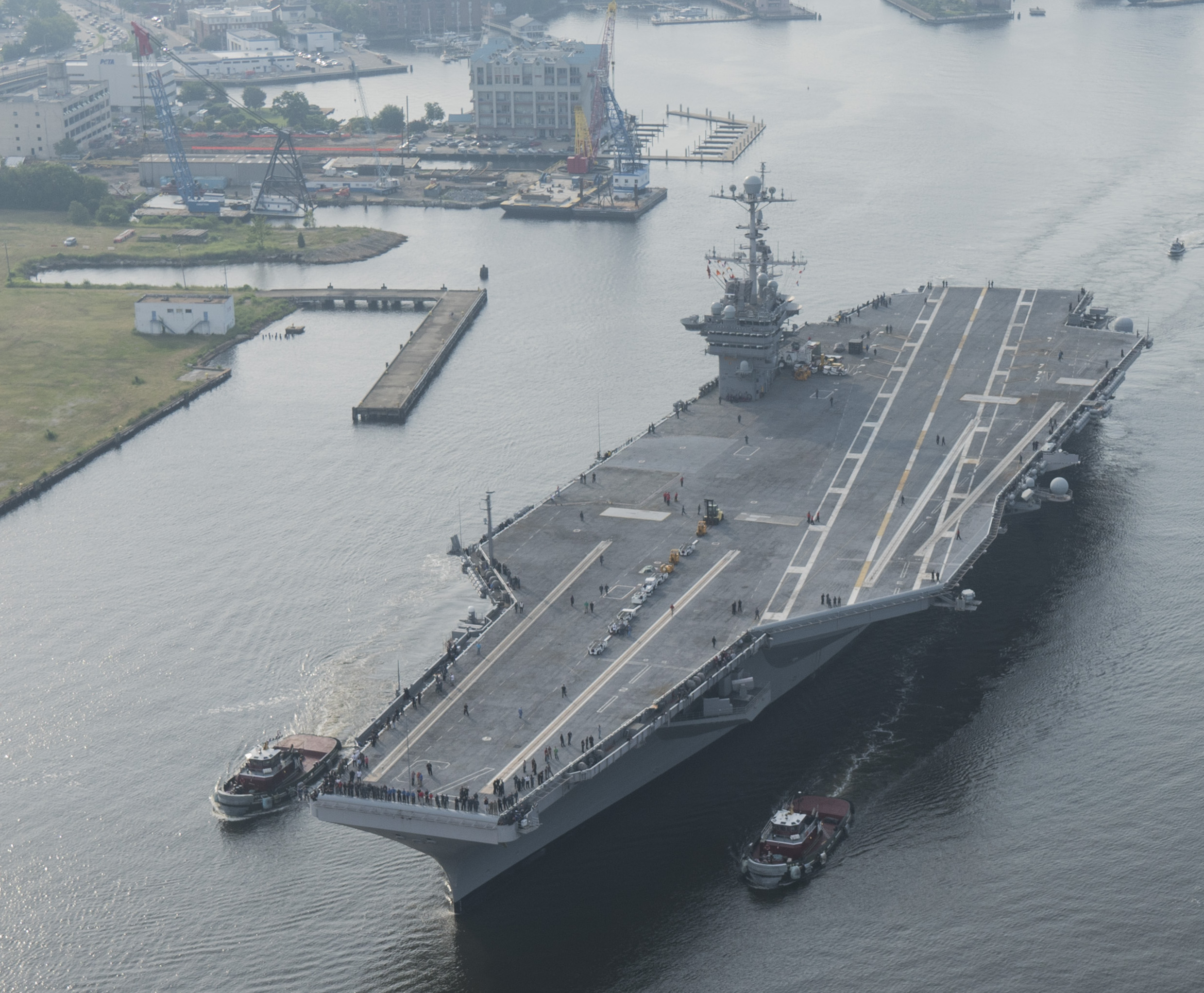