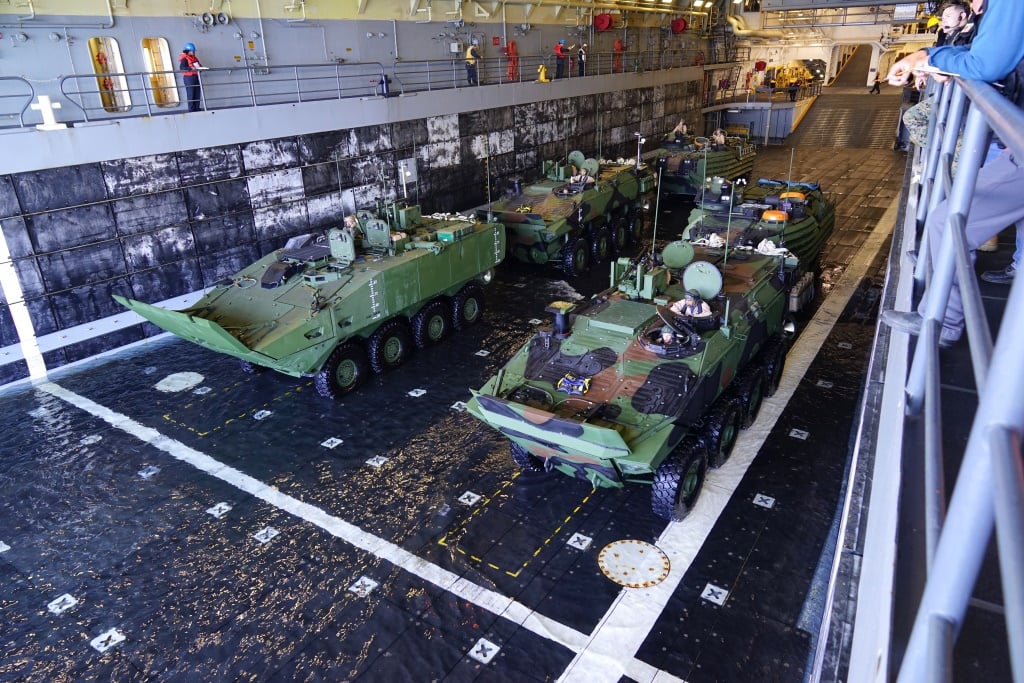 Amphibious Combat Vehicles launch and recover from an amphibious ship for the first time ever, in testing at Amphibious Vehicle Test Branch in Camp Pendleton, Calif., in June 2017. SAIC’s vehicle sits at front left, in solid green; BAE Systems’ two vehicles sit at front right and center left, in camo paint; and two legacy amphibious assault vehicles sit at back, in the well deck of USS Somerset (LPD-25). US Marine Corps photo.

The Marine Corps launched and recovered Amphibious Combat Vehicles from the back of an amphibious ship for the first time, in testing last weekend with BAE Systems’ and SAIC’s competing vehicles.

The ACV program office and Marines from the Amphibious Vehicle Test Branch at Camp Pendleton, Calif., tested the vehicles at sea last weekend from amphibious transport dock USS Somerset (LPD-25), proving that both vendors have provided a more capable vehicle than was asked of them for this first phase in ACV development.

While the first increment, called ACV 1.1, must have some swim capability, launching and recovering is not mandatory. It is an objective requirement for ACV 1.1 – or a nice-to-have – and won’t become a threshold requirement, or mandatory, until ACV 1.2.

ACV 1.1 product manager Col. Kirk Mullins told USNI News on June 21 that this launch and recovery event was included in the test plan to both inform source selection at the end of testing and to inform the requirements-writing process for ACV 1.2.

“We conducted several successful launches and recoveries by both BAE and SAIC, both static and underway with the USS Somerset. Both vehicles performed exceptionally well,” he said, noting that two BAE Systems vehicles and one SAIC vehicle were used in the tests.
“They would come aboard the ship, the ship would re-ballast to the launch conditions, we’d turn the vehicles around and they would launch them right back out. And then they would cut circles out there in the ocean until the ship re-ballasted to the proper recovery conditions, and then we’d bring them back onboard and repeat.”

At the end of six or seven hours of testing, all the vehicles launched from Somerset one last time and swam ashore to the test center on their own power, Mullins said.

The vehicles operated in about sea state 1 or 1.5, Mullins said, with Somerset traveling at 3 or 3.5 knots during well deck operations. Mullins said an amphib might launch legacy Amphibious Assault Vehicles at up to 5 knots, but that 3.5 knots was an operationally relevant speed. The weather conditions were perfect, he said, which helps the Marines at the Amphibious Vehicle Test Branch conduct “crawl, walk, run” tests. The ACV program office hopes to schedule more at-sea time on an amphib in July and August, and Mullins said hopefully they could find more challenging sea and weather conditions to push the ACVs a little harder.

The idea of the ACV tests being operationally relevant is important, Mullins said, because the ACVs will be expected to slide into the place of the aging AAVs and operate in the same way and in the same physical space on amphibious ships.

“Just as important was validating that these vehicles were maneuverable in the well deck, which they were,” he continued.
“Getting them turned around in a very constrained space in an acceptable amount of time, we demonstrated that. And probably most importantly was the stowage, so putting these vehicles in the main V stowage area and making sure that they will fit in that stowage area was important to us. Both vendors were able to get their vehicles into that stowage area with no issues, they fit fine. And the goodness is, from a height perspective, the LPD-17 class of ships, and this, the LPD-25 Somerset, have some of the most restrictive height conditions that we’re going to have to deal with, and we were able to fit in there just fine with no modifications to the remote weapon station or to the main part of the vehicle.”

Mullins said he was very pleased to have seen the operations and the stowage for himself, because “I was always cautiously optimistic that we could launch and recover, all the indicators were there that we could, but until you physically do it, it’s a whole different ballgame once you physically do it. So this was a really successful weekend for us, for the program.”

BAE Systems and SAIC are set to deliver 16 vehicles each to the Marine Corps under their engineering and manufacturing development contract, to allow concurrent testing in multiple locations. BAE has delivered 15 and is set to deliver the last one soon, and SAIC will deliver its 12th this week, with two more coming in July and the last two in August. 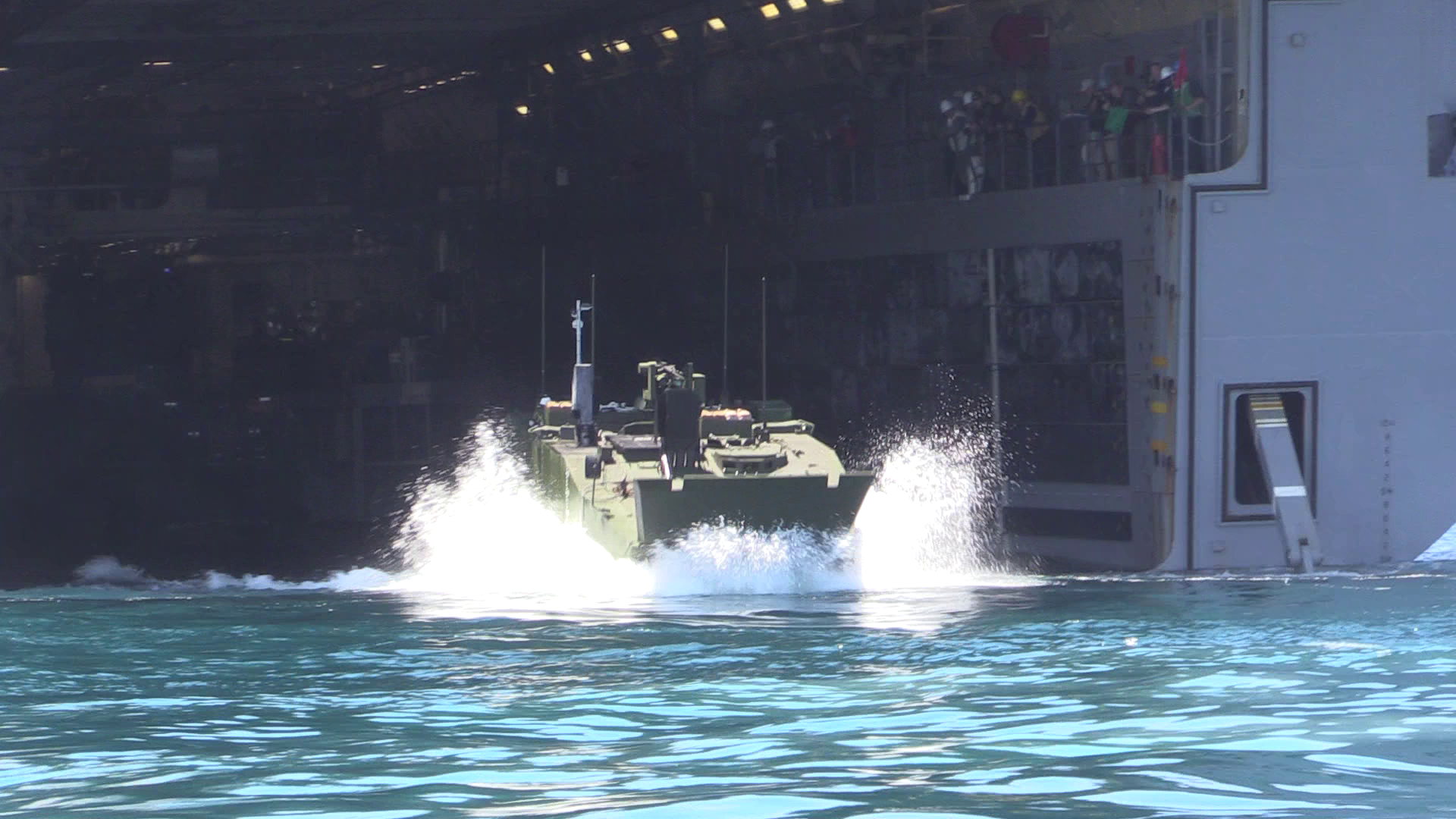 SAIC’ amphibious combat vehicle launches out the back of USS Somerset (LPD-25) in the first-ever launch and recovery test of ACVs. US Marine Corps photo.

The developmental test the two companies’ vehicles are competing in focus on the threshold, or minimum, requirements laid out in the contract. They then test factors that would also be relevant to source selection, and where possible, “then in those key areas where we think they are critical to, in this case the 1.2 requirements document, we want to make sure that we get out there and get physical test data as well,” Mullins explained.

The Amphibious Vehicle Test Branch has a whole summer of test events lined up for the ACVs, including maneuvering through the surf and one ACV towing another ACV, in the event that one experienced some sort of engine failure or was otherwise disabled.

Testing is also taking place at other locations around the country. The Aberdeen Test Center in Maryland is conducting land mobility and automotive testing now and will begin live fire testing in July. The Engineer, Research and Development Center in Mississippi will begin soft soil mobility testing in July. And automotive and mobility testing is also taking place at the Yuma Proving Ground in Arizona.

“Everything is tracking to plan. I couldn’t be happier right now with the overall test schedule, all the test agencies are really supporting us very very well,” Mullins said.

Though the test data is just starting to come back and still must be verified and validated against the program requirements, Mullins said the vehicles are so far looking much more capable than was required of them in the ACV 1.1 contract.

Beyond just making the ACV 1.2 requirements-writing process easier by having a sophisticated 1.1 vehicle to start with, “ideally we always wanted 1.1 to perform at a level to where the linkage to 1.2 was a very very narrow link. And I think tests like this (launch and recovery event) benefit us in that pursuit,” Mullins said.

ACV 1.2 will feature the self-deploying capability already demonstrated in last week’s testing, along with additional seats for passengers and mission-specific mission-specific variants such as command and control or a recovery vehicle.