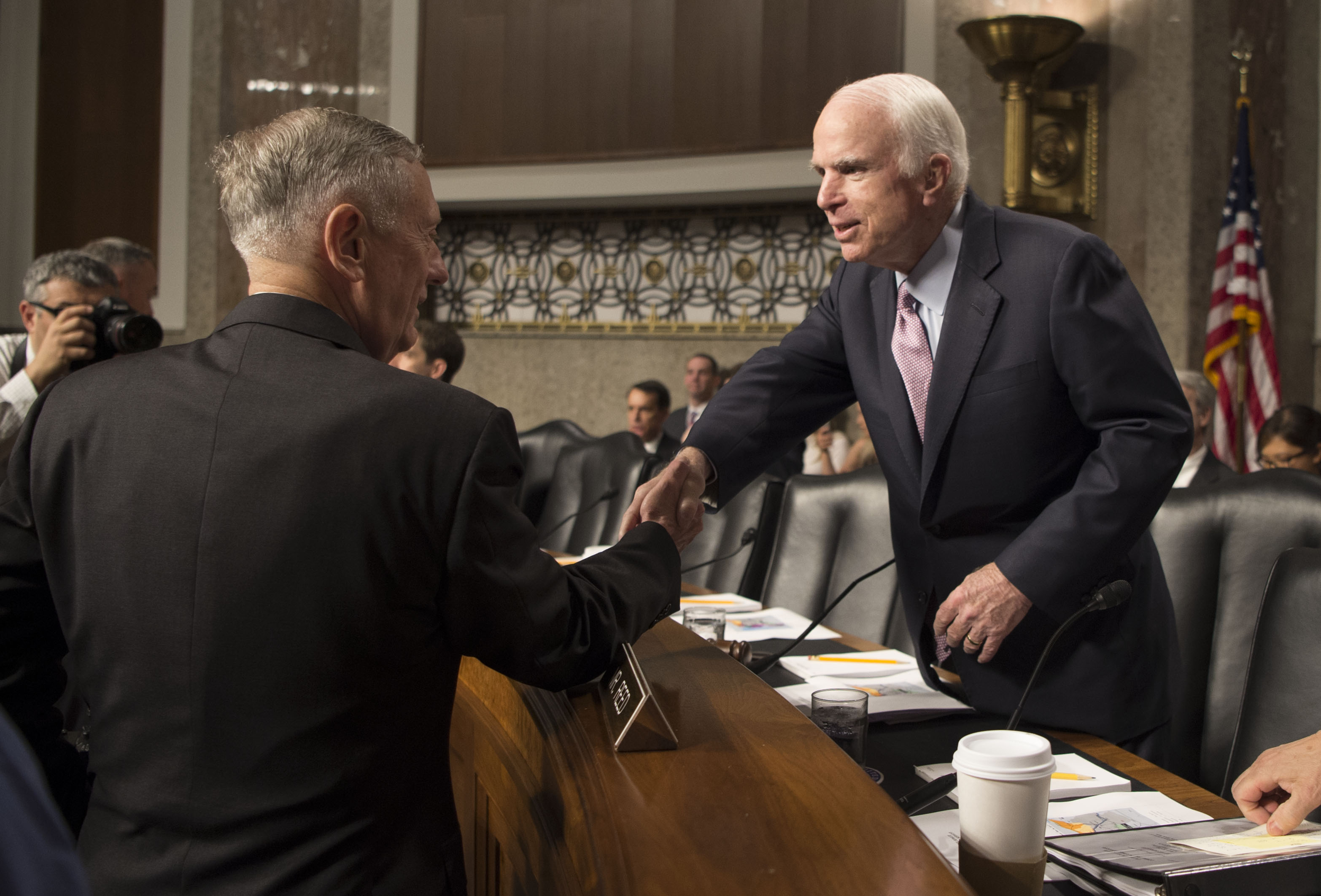 Spearheaded by Chairman Sen. John McCain, members of the Senate Armed Services Committee pressed the Pentagon’s top leadership why it had yet to produce a new national security strategy to inform the budget six months into the Trump administration.

The Arizona Republican said the single year budget the Department of Defense offered to Congress didn’t contain the context and long-range thinking that the House and the Senate needed to make sound decisions.

“We’re moving forward with the authorization with appropriation and without a strategy it makes our job ten times harder,” McCain told Chairman of the Joint Chiefs Marine Gen. Joseph Dunford and Secretary of Defense James Mattis.
“And it’s now six months and members of this committee, typically Senator Reed and I, but everybody we want a strategy. And, I don’t think that’s a hell of a lot to ask.”

In response, Mattis told the panel the complexity of global threats is taking longer to sort though.

“We have entered a strategy free time and we are scrambling to put it together, but anyone who thinks a strategy — an integrated, interagency, whole of government strategy can be done rapidly is probably someone who hasn’t dealt with it,” he said.
“It is — according to Dr. [Henry] Kissinger — the most complex series of threats that he has ever seen in his lifetime and he’s a master of dealing with kinds of issues. We’re working it.”

On Afghanistan, Mattis said, “We’re not winning right now” and promised to brief the committee by mid-July on the details of the administration’s plans for continued support of the Afghan government.

The danger of pulling out of Afghanistan even after 17 years of fighting there, Mattis said, was “we’ve seen what came out of these ungoverned space” there following the civil war. The result was a Taliban triumph and safe havens for al Qaeda to launch the Sept. 11, 2001 terrorist attacks on the United States. He described Afghanistan then as “a center for international terrorism” and could be again.

As to what defines winning in Afghanistan, Mattis defined it as the Kabul government through its security forces being able to control the violence. The United States and allies will be helping it train the forces and provide high-end support, especially aviation, intelligence, surveillance and reconnaissance. He said the largest ethnic group the Pashtun’s through their Loya jirga [popular assembly] supports the United States involvement in assisting the Kabul government in the struggle. The same support is found in opinion polling results among Afghans that were not conducted by the United States, Mattis added.

The fighting in Afghanistan has entered “an era of frequent skirmishing.” Earlier, Mattis said, “Right now, I believe the enemy is surging” hoping to build on its successes in the past year.

When asked about news reports about Russian attempting to hack into 39 states election data, Mattis said, “It’s worse” than that.

Dunford said the Pentagon “now talks about all domains” and expects it to be integrated into strategy and operations. He said the department is not only looking at defensive measures but “being able to take the fight to the enemy” if a cyber attack is launched against the United States. That “doesn’t mean the response has to be limited to cyberspace.”

Both said there should be consequences for Russia or any other nation or non-state actor for using cyber to attack United States infrastructure, including its electoral process. “This sort of misbehavior has to have consequences,” Mattis said.

Mattis acknowledged there are vulnerabilities in the United States to cyber attack that are being reviewed and addressed.

Dunford said overall, “I believe we have a competitive advantage over any adversary” now and probably for the next five years. What is needed is a commitment from Congress to passing a budget annually, rather than relying on Continuing Resolutions with all their restrictions to keep the government operating. He added budgets and five-year projections provide predictability to modernize the force and introduce needed new systems. He and Mattis called for defense spending to rise to five percent above the rate of inflation. The request for Fiscal Year 2018 calls for spending about three percent above the projected rate of inflation.

At the same time, the impact of the Budget Control Act puts hard limits on Pentagon and other federal discretionary spending. Sen. Jack Reed, (D-R.I.) and ranking member, said, “The budget that is submitted will not work” because it is more than $50 billion above the caps.

McCain and others noted during the hearing that Congress has to lift the caps, but so far Capitol Hill has not reached a comprehensive budget agreement on how to do that even for the FY 2017 request.

When asked about the impact of a blockade of Qatar by Saudi Arabia and other Persian Gulf states, Dunford said air operations against the Islamic State in Syria and continuing and United States naval forces continue to transit the waters without harassment. The United States maintains a large air base in Qatar and elements of Central Command’s forward headquarters.

“We have friends in the region who have problems,” Mattis said, referring to Qatar’s support of the Muslim Brotherhood, its diplomatic exchanges with the Taliban and possible ties to al Qaeda. “Our policy is to try to reduce the problems” because “there are a lot of passions at play here.”