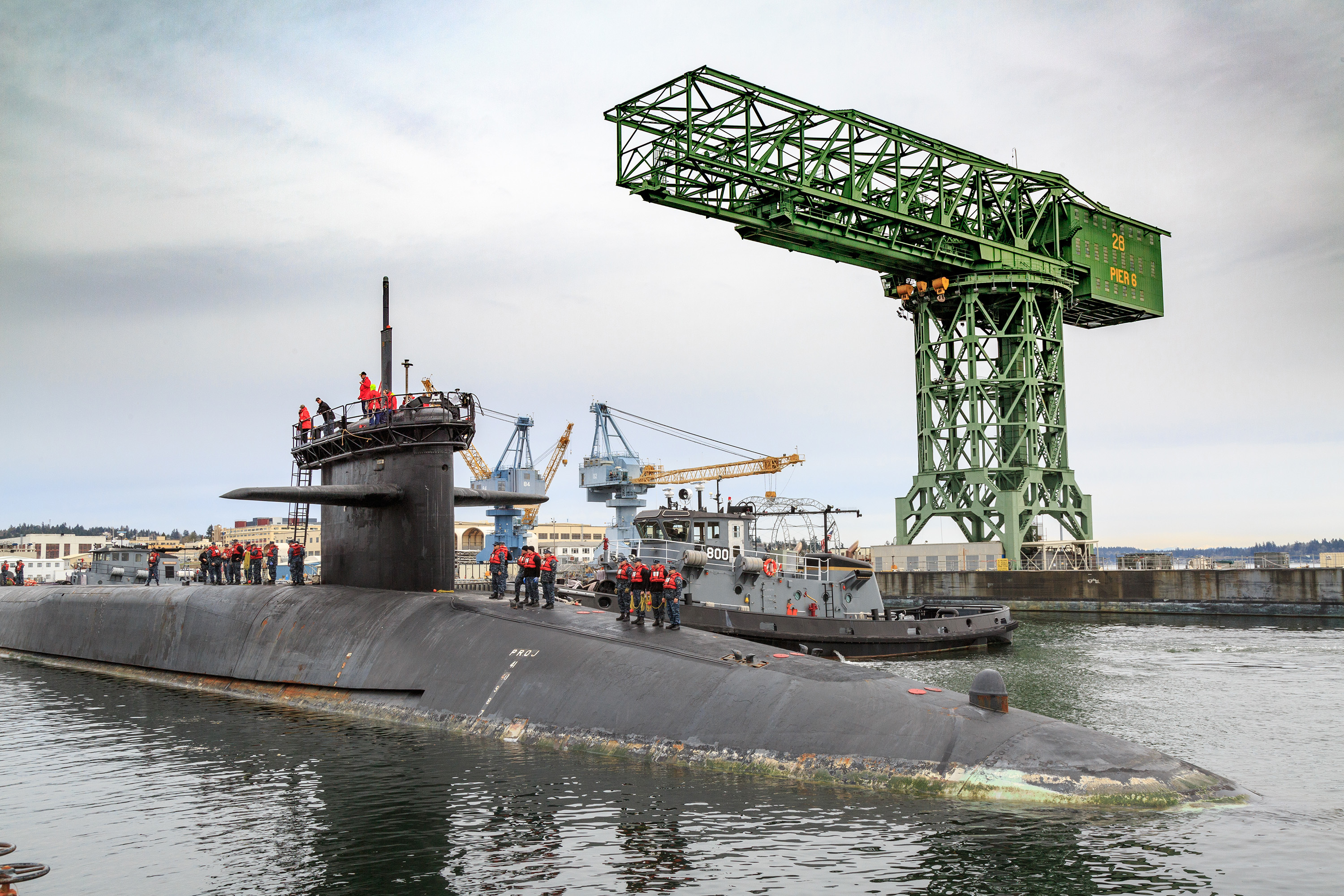 Reps. Rob Wittman (R-Va.) and Joe Courtney (D-Conn.), the chairman and ranking member of the HASC seapower and projection forces subcommittee, said today that building more ships to grow the fleet to 355 has gained a lot of support, but the Navy will never reach that size unless its current ships are properly maintained.

“The current budget agreement that’s before us still has some shortfalls. One of the things that concerns me are the dollars that go into maintaining ships; I’m not certain we have all the dollars necessary to be able to take all the 14 ships that are up for service availabilities into maintenance,” Wittman said, referencing the number of ships the Navy delayed putting into maintenance availabilities due to uncertainty over its final FY 2017 spending levels, as the government has been operating under a continuing resolution since October and awaiting a final budget plan.
“I think this year’s [National Defense Authorization Act] is a way for us to really direct the attention to that.”

Wittman, speaking alongside Courtney at an event cohosted by the Center for Strategic and International Studies and the U.S. Naval Institute, said delays in getting ships into the yard for repairs, routine maintenance and system upgrades lead to deployment delays.

“All those things reverberate throughout the fleet and they have an impact down the road. I think for me it’s very easy for us to make the case for additional dollars there,” Wittman said.
“And we have to look at it too in this year’s budget as the number comes down because there’s going to be an effort to say, let’s equally send money to all the different branches. Well listen, I understand that. Last year we did some things to try to make the Army whole because there were some shortfalls there. I think we are going to have to argue to say there are some things we’re going to have to put in the Navy budget to catch up, and there may be somewhat of an imbalance there as far as how resources are allocated amongst all the service branches. Listen, I understand the competition there, but it’s also about making priority decisions and understanding we don’t get to 355 and we don’t have presence if those ships can’t get to the yard, they can’t get repaired, because they’re not available then for deployment.”

Courtney added that current events may also help prove his case for the need for more ship maintenance dollars, as Navy presence around the world remains in the headlines.

“Unfortunately world events are creating an environment where I think the argument is going to be easy to make. If you look just in the last month in terms of the missile strike in Syria … and [U.S. Pacific Command commander Adm. Harry] Harris’ decision to extend the [aircraft carrier USS Carl Vinson (CVN-70)] deployment by an additional month, that actually will be Exhibit A in terms of just how really knife-edge the options are for Navy leadership and the president in terms of just trying to cover the globe right now,” Courtney said. 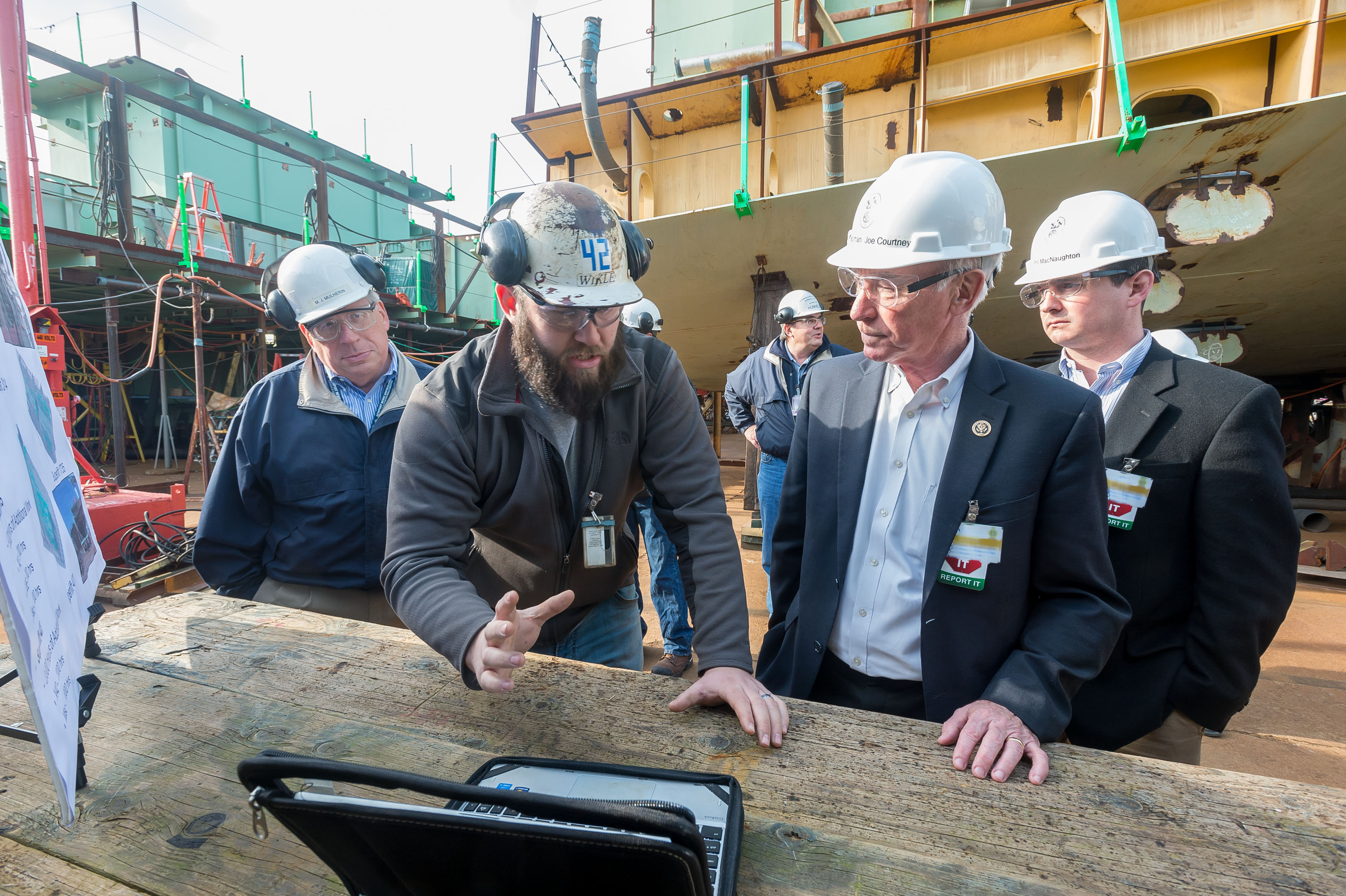 Aaron Wikle (left), a pipefitter at Newport News Shipbuilding, shows Rep. Joe Courtney how the shipyard is presenting work to shipbuilders in a visual environment with the goal of improving quality and cost performance, in a Feb. 23, 2016, tour of the yard. HII photo.

Courtney said one struggle the Navy and lawmakers have in getting support for higher ship maintenance spending – compared to shipbuilding spending, for which the Navy asked for a recently unprecedented $18 billion in FY 2017 and ended up with more than $20 billion from lawmakers – is that shipbuilding has a constituency in almost all 50 states that in recent years has begun to organize and lobby. Ship maintenance has no lobbying equivalent.

Speaking of industrial base coalitions for amphibious ships, aircraft carriers and submarines, Courtney said, “there’s built-in constituencies around the country that come to Washington and lobby for boosting shipbuilding. You don’t have the same kind of political network when you talk about readiness and the public yards. The work is pretty much concentrated in those places where the yards are located. Having said all that, I think the reality is so stark, it’s kind of a must-do item for Congress.”

In addition to needing to spend more on ship maintenance availabilities, Courtney and Wittman agreed lawmakers would have to find money to fix up the shipyards themselves, with the Navy’s public shipyards that exclusively work on submarines and aircraft carriers unable to keep up with the current workload and experiencing massive backlogs of work.

“The public yards have issues, they’re antiquated and they are really backed up in terms of the work that is happening up there,” Courtney said. 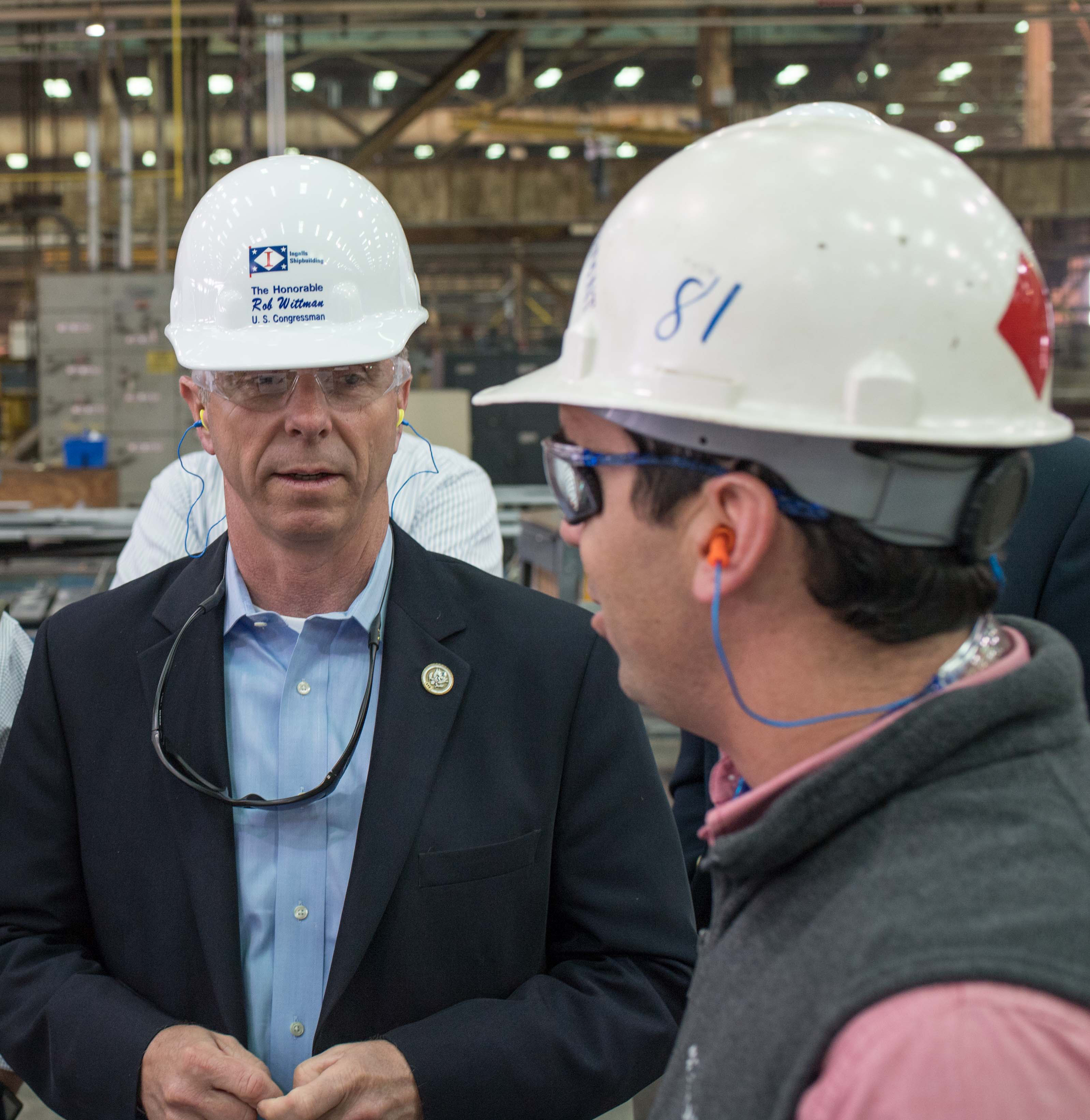 Rep. Rob Wittman, R-Va., visits with Lance Carnahan, a general hull superintendent at Ingalls Shipbuilding, during a visit to the shipyard. HII photo.

“The public yards are underperforming, and it’s only because we haven’t made the investments there,” Wittman added.
“Just in a place like Norfolk, when our shipbuilders don’t even have a bathroom they can go to that functions, I think that’s pretty fundamental. We have to be able to make those investments there to get the yards back up to where they need to be.”

Courtney spoke of “horror stories” in the attack submarine fleet – which is prioritized at the bottom of the public shipyard workload, with ballistic missile submarines being the top priority, followed by aircraft carriers – including USS Connecticut (SSN-22) taking four years instead of a planned two to complete repairs, USS Albany (SSN-753) missing an entire deployment cycle as it sat in the yard for four years, and USS Boise (SSN-764) losing its dive certification because it couldn’t even get into the shipyard due to such extreme backlogs. Meanwhile, he added, “you’ve got combatant commanders out there screaming for attack subs.”

Courtney added that Naval Sea Systems Command commander Vice Adm. Tom Moore recently told him the Navy was beginning to look at the “One Shipyard” concept created under former NAVSEA commander Vice Adm. Kevin McCoy, in which private yards were more seamlessly brought in to support the public yards for carrier and submarine work.

“That’s not happening to the same degree as it was a number of years ago,” Courtney said, but offered it as a potential solution for today’s backlogs, as it would take potentially a decade or more to renovate and modernize the public yards.

With several “high profile delays” in submarine maintenance availabilities, as well as aircraft carrier gaps around the world and Navy fleet operations around the globe constantly being in the news, “the evidence is strong” as he and Wittman seek higher spending levels next year for ship maintenance activities.